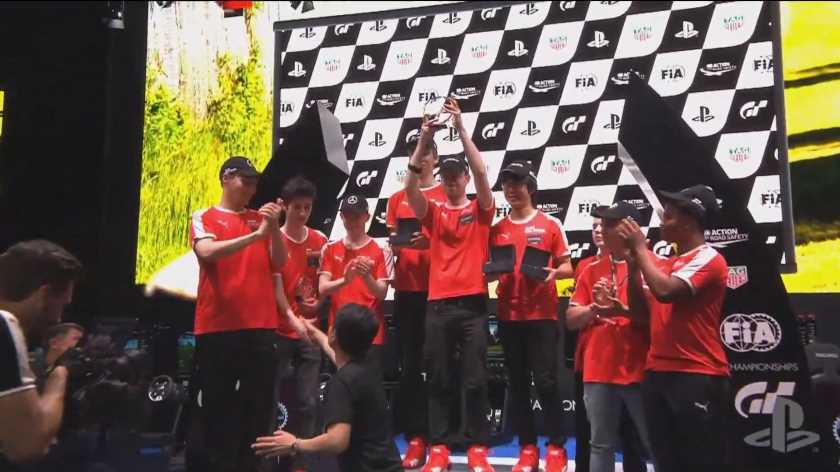 Following on from the exhibition race in the Toyota GR Supra GT Cup, the action at the Nurburgring World Tour turned to more serious affairs with the Manufacturer Series.

The format for this World Tour saw each of the teams’ three drivers tackle one race each, with a three-man race at the end worth double-points. Unlike the event in Paris, two of the first three races used the slower Gr.4 cars, although the final race was still the familiar showpiece Gr.3 event — appropriately on the N24 circuit. 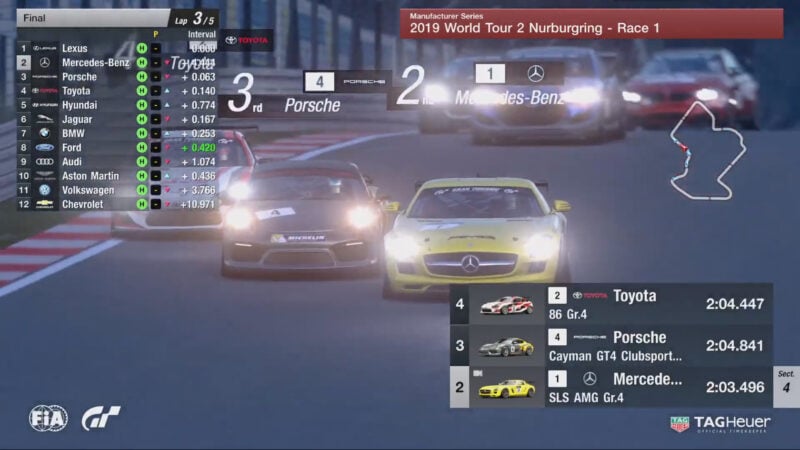 After coming through a difficult top six shoot-out unscathed, Lexus, in the hands of Kanata Kawakami, scored a lights-to-flag victory in the Gr.4 cars. Kawakami wasn’t seriously challenged from the moment the lights turned green — but all the action happened behind him.

Porsche, and Adriano Carrazza, had a race-long battle with Toyota’s Rick Kevelham, trading places on a corner-by-corner basis. Coming to the end of lap three the duo was so engrossed in their battle that neither noticed Bernal Valverde’s Mercedes-Benz SLS, which simply slipped through on the inside. With the GT86 out of position it soon fell down into the clutches of the pack, in 7th place.

Also making some impressive moves was Parker Leach in the Jaguar F-Type. He’d quietly made up a place a lap before jumping past the Hyundai Genesis of Stephane Jeandenans into fourth. This left him in an ideal position when the inevitable happened. Coming into the bridge section, the Cayman and SLS came together, spearing the Mercedes off into the barrier.

This left Porsche to walk to second, followed home by Jaguar, and Toyota just off the podium in 4th. 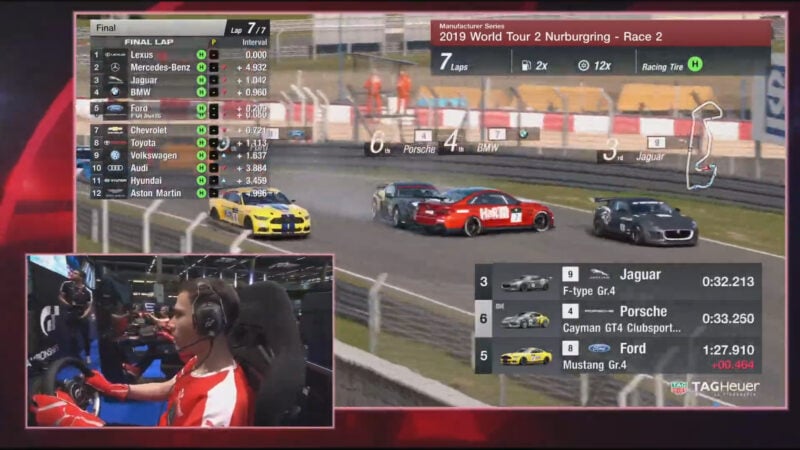 A new track but familiar cars, the second drivers took to Gr.4 cars again — and with a familiar result, at least at the front. Andrew Brooks carried on from where Kawakami left off, taking an unchallenged lights-to-flag victory. Again, the action was all for second place.

Making an early challenge for that was Cody Latkovski in the Mercedes. After a difficult end to the previous race, Latkovski made up three positions by the time the cars left the first turn. This put him immediately into the Porsche/Jaguar/Toyota battle but the long straights seemed to count against the GT86 which soon fell away.

Much of the early tussling took place further down the grid. Martin Grady in the Audi TT took an unscheduled trip to the gravel, which the stewards adjudged to be assisted by the Aston Martin of Marco Mendoza — which seemed a little harsh, as Mendoza himself appeared to get a tag from Kin Long Li’s Chevrolet — and gave a two-second penalty.

Like the previous race, all of the action unfolded on the final lap but this time it featured seven different cars. Latkovski’s over-under move on countryman Joseph Dejesus’s Cayman briefly halted everyone’s progress, dropping the Porsche back into the clutches of Vincius Neto’s Jaguar F-Type. Also slinging himself into the fray was Raul Aguilar’s BMW M4, but what looked like a mistake to the outside saw him broadside across the track. This left Daniel Solis, unobstructed, to jump the Ford Mustang up into 3rd.

Even with only half a lap left we weren’t quite done. Dejesus kept the Cayman to the inside on the multi-apex left and took 3rd back, leaving Solis vulnerable to Li. The two American marques crossed the line 4th and 5th — Chevrolet from Ford — but a post-race penalty dropped Ford to sixth behind Toyota. At the front, Latkovski took 2nd from Dejesus, with Lexus an age ahead. 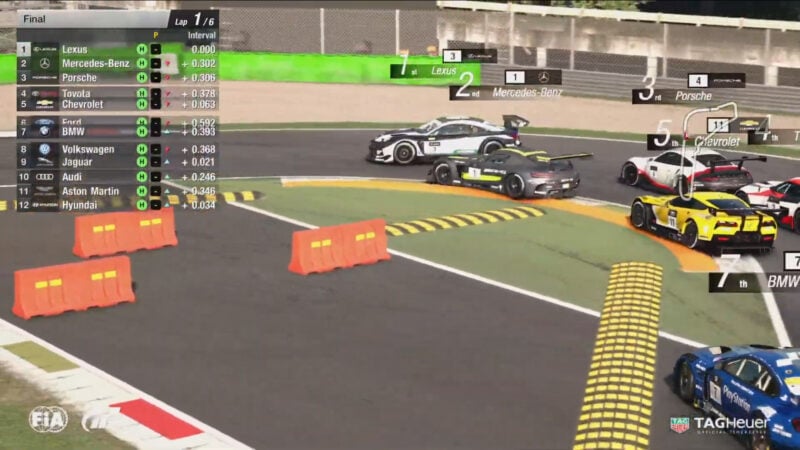 After two lights to flag wins for Lexus, Leonardo Bruzzi could have been excused a bit of confidence for race three… but this is Monza, and turn 1 at Monza is often chaos.

So it proved. Edward Williams was able to get his Mercedes alongside the Lexus into the braking zone, and the mayhem started. The AMG appeared to turn across the bows of the Lexus, then run wide. As the Lexus swept onto the second apex, the Mercedes hit it in the rear, spinning it about. With a stricken Lexus in the middle of the track’s slowest point, the field scattered, causing further collisions. Bruzzi ended up dead last, and the stewards took a dim view of the incident, slapping the Mercedes with five seconds’ penalty.

Adam Wilk in the Ford GT had worked his way up to second and a potential first with a Mercedes penalty, but he encountered a disaster of his own. Wilk dropped the GT into the Ascari chicane, but compounded the issue by a poorly judged track rejoin. That saw him collected by two of his rivals in separate collisions, and a three-second penalty for his trouble.

This all promoted Yo Kurohata’s Chevrolet to the lead, but he soon picked up a one-second track penalty. That gave Randall Haywood’s BMW the lead, for a fourth different leader in three laps. Soon it was five in five, as Kenta Morimoto slung the Audi R8 up into the lead when Haywood — who seemed to be struggling with the lead on his headphones — took a sliding entry into the della Roggia chicane.

Despite that dropping him back into a five-car fight for second, Haywood soon recovered and retook the lead at the first chicane. Despite Morimoto harrying him for the rest of the lap, Haywood held on to take the win ahead of the Audi by just under 0.2s. Indeed the entire top six — Mercedes, Chevrolet, Aston Martin and Toyota — were only covered by two seconds at the flag. 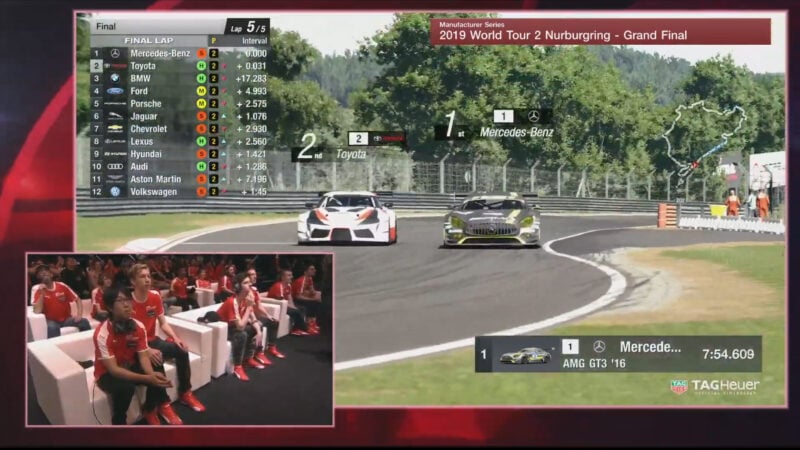 That set the grid for the final race, but the teams’ tire tactics were their own. The front five chose a safe middle-ground on the medium tire, but Toyota — and Tomoaki Yamanaka — opted for the softs. With so few overtaking spots on the Nordschleife it looked like a bit of a risk.

Not that Yamanaka paid much attention to that. By the end of lap one he was already in second place, just under a second behind the leading Aston Martin, and further defied predictions by staying out for a second lap on the softs. A rather spectacular move around the outside at Schwedenkreuz — a gravesite for so many hot hatchbacks on tourist days — moved him up into the lead.

Further back, the cars on the hard tires — Hyundai, Porsche, Jaguar and Ford — were making stops after the first lap to ditch the slow rubber. This rather strongly hinted that the plan across the grid would be two laps each on soft and medium, with a sacrificial single hard tire lap. That meant the top six cars would all pit at the same time.

So it proved, with Chevrolet, Mercedes-Benz, BMW, and Audi all joining Toyota and Aston Martin in the pits. However, while most opted to take that hard tire for the middle stint, Toyota went from soft to medium — with BMW switching the other way. The plan seemed to be to establish a lead and defend it on lap five.

Due to straight line speed, the Aston had resumed the lead before the pit stop, but second Toyota driver Rick Kevelham took a leaf out of Yamanaka’s book. Again the tire differential came into play, but Kevelham sent the Supra around the outside of Voon’s Vantage at Schwedenkreuz in a copy-paste move.

Presumably with the stewards’ words ringing in their ears from Monza, the drivers all kept it clean over the course of the next lap, but lap four saw a shake-up in the order. The second round of pit stops saw Aston Martin drop behind Mercedes-Benz and Porsche — likely due to additional fuel in the stop. That put the three cars on the same patch of asphalt. Latkovski used the Schwedenkreuz trick to sweep past Dejesus in the Porsche, but Vazquez wasn’t quite so fortunate. After a relatively audacious pass, the two tangled at Ex-Muhle in an incident that ultimately — and justifiably — attracted the wrath of the stewards to Dejesus.

Both Toyota and BMW chose to make their last lap the sacrificial one, and that brought the hard-charging Latkovski back into contention. With all the stops out of the way, Simon Bishop’s Supra lead the Mercedes-AMG by 9.9 seconds, but with an on-paper disadvantage of 11 seconds…

Sure enough, by the time the cars reached the final straight, Latkovski was on Bishop’s tail — but the cars seemed evenly matched on the straight. That left one braking zone and one corner to decide the race and, with the two teams separated at the top by a single point, title. Hitting Hohenrain two abreast though is never a good idea, and the inevitable happened. Latkovski, on the outside, ended up off the track and visibly unhappy. Following the checkered flag, there was a lengthy steward’s investigation which eventually settled the evening’s action: racing incident.

With its first win of the night, Toyota took home the Manufacturer Series title, from Mercedes-Benz in second and BMW in third.

The action moves on to the Nations Cup tomorrow, which you’ll also be able to watch live on GTPlanet. 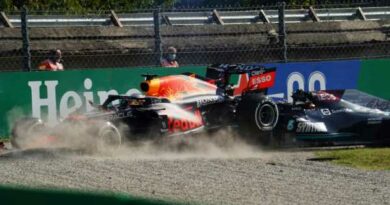 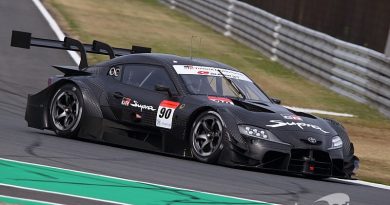 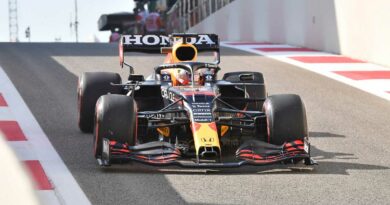