U.K.-based Ferrari specialty shop GTO Engineering has earned a reputation selling, maintaining, and (re)building various road and race Ferraris since 1991. This is the company’s latest, most ambitious proposal: The GTO Engineering Moderna, a modern take on a Sixties Ferrari, blending classic, lightly updated style with modern engineering to create a jaw-dropping V-12 coupe.

This isn’t the first ambitious project out of GTO Engineering. The company recently launched its 250 SWB Revival, a heavy restomod based on a less-desirable early-Sixties Ferrari (often a basketcase), rebodied and revamped to create a visually perfect replica of a 250 GT SWB Berlinetta Competizione. It has hand-formed aluminum bodywork draped over an upgraded chassis, powered by a Ferrari-based V-12 packing 350 hp and managing 0-60 mph in six seconds.

Now comes the next idea, an homage to V-12 prancing horses that promises to pair “the best of Sixties motoring with modern and motorsport-derived engineering.” Meet the GTO Engineering Moderna.

The new project has some lofty targets to meet. The Twyford company claims the car will weigh less than 2200 lbs (a nice round 1000 kg), for one. This’ll be done thanks to a tubular steel chassis, aluminum subframes, and carbon fiber in the shell. GTO Engineering says it will use F1-spec carbon fiber for the main body, with lightweight aluminum making up its hood and doors. Moderna will come with independent suspension all round, “large” (per the press release) wheels, and lightweight, powerful (and probably also “large”) brakes. Though, with the car weighing well less than a new Miata, those brakes won’t have much to stop.

Power will be taken care of by a quad-cam V-12. This is something of a specialty for GTO Engineering—in the 250 SWB Revival, GTO’s hand-built (to the tune of 300 hours per engine) powerplant is sonorous, exciting, visceral, and unlike anything any modern manufacturer produces today. The Revival manages a 150-mph top speed; the Moderna is set to weigh about the same (maybe a smidge less), and while those 350 horses have never felt as if they were struggling, we can expect a modest power bump in the new car. 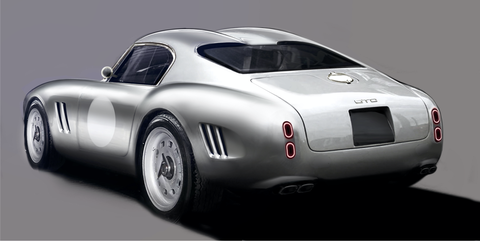 Mark Lyon, GTO Engineering’s Managing Director, has kept the news of this new car secret for quite a while. His excitement is hard to miss. “It’s exciting to finally talk about our new project—a car that we’ve been discussing, sketching, specifying and honing for some time,” he said. “Now it’s in development and we’re working alongside some incredible technical partners, we’re ready to lift the cover off the design renderings and initial sketches and explain the fundamentals of what makes this new car tick.”

While the Revival endeavors to be as close as possible to an original Ferrari, the idea with Moderna is to reimagine those cars, applying contemporary engineering to build the sort of car that Ferrari might be creating today had its design language not moved on all that much. Essentially, a ‘60s Ferrari that you can actually live with, one that will keep up with modern competition.

Lyon goes on: “We’ve learnt from building the 250 SWB Revival, and working on a range of Ferraris, that a car’s weight and engine are two of the key ingredients to make a good sports car. So, we knew that this car should be under [1000 kg] and powered by a quad-cam V12— an engine format we are familiar with and developing in-house.”

To accomplish that weight, GTO will use carbon fiber, pairing it with conventional materials in key areas. “The doors and bonnet, the feel and weight when you open them, was something we knew we wanted to keep… that’s why they’ll be made in aluminum—they’ll be light weight but still give that reassuring close and feel of a classic,” Lyon said.

When it comes to design, the Moderna certainly looks familiar, like an old school Ferrari GT with a few details from the current day. We’ve yet to see anything in person, but GTO’s rendering shows some rather LED-looking headlights, neatly integrated tailpipes, and tiny, modern taillights. Much like seeing an old friend for the first time in years, the overall shape is right, but there’s something new in the details. But with a long hood housing a V-12 engine, functional vents all around the body, and a true two-seat setup, the fundamentals are solid.

GTO Engineering doesn’t do things by halves. This won’t be an “off the rack” car by any means. Each car will be painstakingly personalized with the usual paint and trim choices, as well as suspension and gearbox decisions, and much more as well. If you want it, you can (within reason) have it. Though don’t go asking for a turbo four-cylinder.

The Moderna is being developed now, with final specs to be revealed in due course. Pricing is not yet known, but seeing as the 250 SWB Revival starts at over $1 million, don’t expect Moderna to be an affordable proposition. Those who can foot the bill will be pleased to know that GTO Engineering plans to ship this retro-modern machine to the U.S. and Europe, with ordering available now. 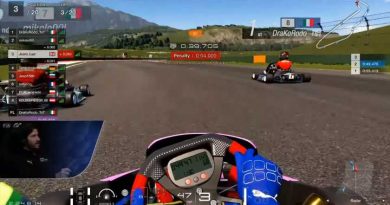 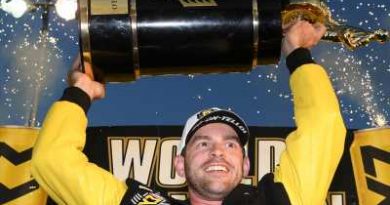 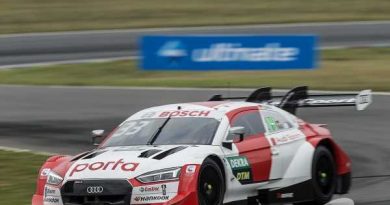