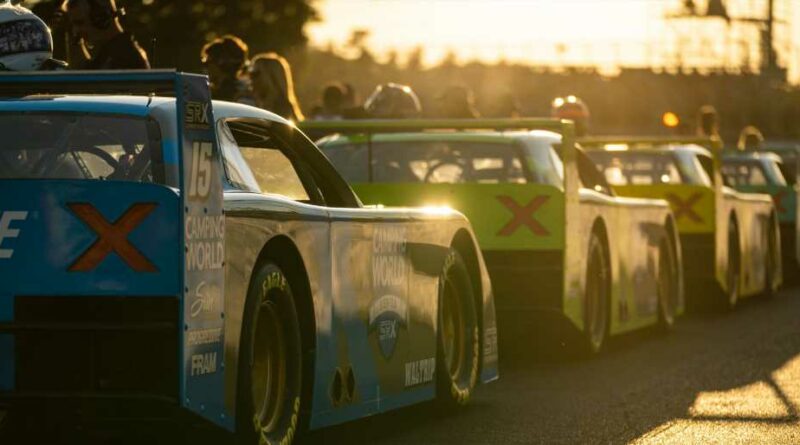 It was the inaugural event in the six-week summer series best described as the International Race of Champions but with a grassroots twist and Coby was selected to represent his region and discipline in the red and white and blue ‘Rocky Balboa’ car.

Unbeknownst to many watching on CBS, Coby is already earmarked for the NASCAR Hall of Fame as soon as he becomes eligible, but this was a coming out party on the national stage. Coby, 41, is a six-time NASCAR Whelen Modified Tour champion and one of the most admired competitors in Ground Pounder history.

That may not sound particularly impressive to the casual fan, but the Modified Tour is actually the sanctioning body’s most prestigious short track division and one that travels throughout the East Coast. It has produced national touring stars such as Geoff Bodine, Jimmy Spencer and Ryan Preece.

Richie Evans and Mike Stefanik have already been enshrined into the Hall of Fame from that discipline and Coby will someday follow. It was that legacy and lineage that Coby represented and showcased in besting 11 international legends.

“Just to have all these fans here and all these drivers — the guy who won the Indianapolis 500 two weeks ago, NASCAR Hall of Famers, Daytona 500 champions, and here I am, a Modified Tour and Stafford Speedway guy.

“It just goes to show there are a lot of good short-trackers out there. I like to think I’m one of them, but there are hundreds of others who are good at their craft and get around their speedway really good. It ain’t going to be easy for any invader, and I love that we were in equal cars.”

Further, Coby potentially scarified an element of his own legend to participate in the debut SRX event. He entered this weekend third in the NASCAR Modified Tour championship standings and just five points out of the lead. He accepted the SRX invite at the expense of the Tour race at Oswego Speedway, a decision that could cost him a seventh championship, one that would tie him with Stefanik, or inching closer to matching Evans with nine.

“I’ve got six Tour championships and I’m shooting for seven to tie Mike Stefanik, and if it takes one more year to tie a great like that, I’m happy to wait,” Coby said.

Sure, many of the participants are past their primes, but Coby did best a field that included the driver who won the Indianapolis 500 just two weeks ago and a NASCAR legend (Stewart) who already has two 410 Sprint Car victories this year.

It was a once in a life-time opportunity for Coby to race against the superstars on a national television stage at home in front of his closest family and friends.

Coby was so excited about the win that he couldn’t even complete his celebration without falling onto his back on the frontstretch.

“The only thing I screwed up tonight is my exit, and I’d do it all over again if that’s what it takes to win this race,” Coby said. “Thank you, fans.”

“That’s what this is supposed to be all about,” said Stewart, who finished third. “The whole concept about this was to have fun and to celebrate motorsports, and I think this was a perfect example of that tonight. Let’s go five more weeks and do the same thing at five more tracks.

“This is a very aggressive six-week stretch. To be in Connecticut tonight, then to be in Iowa next week on dirt, and to go back and forth like we are for six straight weeks and having to maintain these cars and get loaded up and travel and get set up, fix cars and do that again for six straight weeks is going to be hard on our crew guys, but I wouldn’t substitute any of the guys we’ve got for this. These guys are all excited, and I think seeing their faces after we climbed out of the cars was as much fun as it was to see the fans’ faces. These guys have worked 70-, 80-hour weeks to get 16 cars ready to come to the racetrack. I’m pretty proud of these guys.”

Evernham agreed, albeit under the concession that he has work to do in repairing several torn-up race cars.

“I thought the guys raced hard. We tore up a little bit of equipment but, again, I think the fans enjoyed it and it’s all about the fans,” Evernham said. “The drivers did a great job tonight. I think we’ve got to give ourselves a pretty good mark on tonight based on the crowd reaction. I think it was a good show. It’s pretty humbling because I know how many people work behind the scenes to make this happen, from the television side, the advertising side, the guys who built the cars. It’s humbling that the greatest drivers in the world have come here to support this program and reach out and be right with the folks in grassroots racing.”

Takeaways from Saturday night can be found below.

If one of the primary goals of Superstar Racing Experience was to spotlight the atmosphere and culture of short track racing to a national audience, the inaugural event delivered that in spades. Public address announcer Kyle Rickey whipped the crowd into a frenzy before CBS flipped the switch and it immediately showed.

The crowd was solidly behind their local hero but were also clearly into the legends visiting their local track. Superstar Racing Experience made million-dollar Stafford Motor Speedway look like a billion dollars.

When trying to come up with a name for the competition caution, because that’s become something of a taboo word to racing diehards, Bestwick deadpanned ‘the fun flag’ and it stuck across social media.

Perhaps it’s too soon to judge the format until it’s been used on dirt, but some of this arguably has room for improvement after the debut pavement event. Superstar Racing Experience is just for fun, so there’s no need to take any of this too seriously. However, the on-track product didn’t need the half-time break as Coby, Biffle and Marco Andretti were putting on a show.

On the other hand, the TV timeout allows CBS to cut to full-screen commercial, meaning they can go side-by-side once the racing resumes — which is a fan friendly amenity to be sure. The breaks, even those that took place between the heats, just felt like dead air at times.

The heats were too long at 15 minutes, and lacked consequence, and the drivers seemed to be just turning laps and saving their tires. Shorter heats could create a greater sense of urgency but then there would be even more dead air to fill. There was nothing wrong with a dozen cars, but maybe a handful more would create lapped traffic and a little more action.

Perhaps this is a reflection of my age (32) and my formative years consuming racing media, but Allen Bestwick is a master at his profession and Superstar Racing Experience served as a reminder that he should be calling top-level motorsports somewhere for someone.

Bestwick is similar to Joe Buck in that his voice is an automatic signifier that something is a big deal and you need to be watching. He balances humor and seriousness as well as anyone, which is especially hard to pull off in an era where motorsports struggles to do so in general. Bestwick was an absolute delight to listen to on play-by-play, because of course he was.

With all due respect to Danica Patrick, her energy level didn’t seem to match the occasion. It came across like a lack of enthusiasm for the concept from a color analyst. As an open wheeler turned stock car racer, Patrick had minimal experience on pavement bullrings and it just wasn’t an ideal fit. Patrick absolutely works well for the Indianapolis 500 pre-race show because there’s an obvious reverence and expertise she provides, but she just seemed out of place on Superstar Racing Experience.

No doubt James Hinchcliffe will bring the energy to his races in the color position.

The drone work on Saturday night was seriously cool. It’s a feature World of Outlaws has used to great affect over the past 18 months, and that style of in-race camera usage was a welcome addition. Certainly, NASCAR has utilized a drone over the past season and a half too, but there are legitimate reasons for why it can’t be maximized with fans on within traffic during a legitimate points-paying race.

The graphics looked crisp and professional. The on-air talent (see above) was largely fantastic and Superstar Racing Experienced used the two-hour-plus television window to tell stories about who Doug Coby is and why the reigning Indianapolis 500 winner was racing at Stafford Motor Speedway instead of his native discipline.

The infield microphone audio level was off at times and needed constant adjusting but that’s more of a first-week bug that will surely be corrected before Knoxville Raceway next week.

It’s not the biggest deal in the world, and we’re just spitballing here, but enough people mentioned the lack of a color-coded TV scoring loop ticker that it’s worth detailing. A series that emphasizes colors over numbers should probably feature that on the broadcast scoring loop!

Because each car utilizes the same primer base, it takes a while to mentally match names with colors. The exception, of course, is the local hero car with its patriotic livery driven by Coby on Saturday. On the other hand, CBS and SRX opted to use a uniform orange, white and black look across the board and it did look crisp.

So maybe having a rainbow of hues roll across the top would be distracting.

This is legitimately a fun group of assembled racers that Superstar Racing Experience can do a lot with over the remaining five weeks. Paul Tracy and Willy T. Ribbs spent their pre-race media availabilities lamenting a lack of excitement and personality in modern motorsports and decided to spent the second half of the race door slamming each other, just because, in the absence of an opportunity to win.

Helio Castroneves spun Marco Andretti early in the race and was interviewed by the booth, where he comedically expressed concern that he might have one coming back his way later this summer.

Lastly, it was just surreal to see this combination of Stock Car, Indy Car and Sports Car drivers assembled at modest Stafford Motor Speedway alongside its winningest modern champion in Doug Coby. In what other universe is the current Indy 500 winner going to race at Stafford, Knoxville, Lucas Oil Raceway. Eldora, Slinger and Fairgrounds Speedway Nashville?

It’s an amazing spotlight for the local hero driver, for their facilities and for fans to be introduced to tracks they may have not visited otherwise, while also airing on CBS. 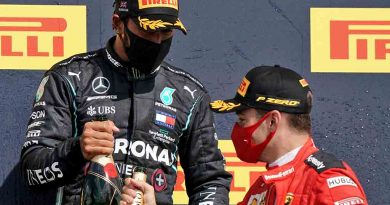 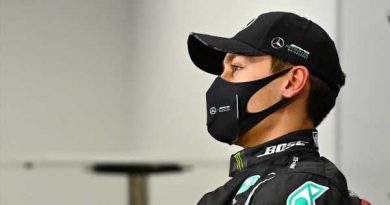