Max Verstappen clinched his maiden Monaco GP win on Sunday to lead the Drivers’ Championship after a race in which Lewis Hamilton gave voice to his frustrations over Mercedes’ strategy.

Verstappen effectively started from pole position after Charles Leclerc didn’t make the start, out of the race with a broken driveshaft.

Verstappen led from start to finish, only briefly relinquishing P1 when he pitted, to not only bag his first Monaco podium, but to do so with a race win.

Carlos Sainz was second, scoring his first podium with Ferrari, while Lando Norris held off Sergio Perez for P3.

This is the twelfth victory of his F1 career, and his first at the #MonacoGP! #F1 pic.twitter.com/2wjKf8GsWi

It was not a happy return to Monaco for F1’s sole Monégasque driver, pole sitter Leclerc’s Ferrari – the one that the driver crashed in qualifying to secure pole – gave up the ghost on his warm-up lap.

“No. No. No. The gearbox guys,” said Leclerc as he made his way back to the pits, Ferrari informing Race Control that he’d start from the pit lane. He didn’t, his race over even before it began with Ferrari reporting that it was a broken ‘left driveshaft’.

The 19 remaining drivers, with Verstappen effectively on pole position, formed the grid with the Red Bull driver immediately across the track to block Valtteri Bottas, Carlos Sainz third ahead of Lando Norris, Pierre Gasly and Hamilton.

Sebastian Vettel, Sergio Perez, Antonio Giovinazzi and Esteban Ocon made up the top ten while at the very back of the field Mick Schumacher mugged his team-mate Nikita Mazepin at the hairpin to take P19.

With the top ten running as they were on the grid, so began 78 laps of traffic as they followed one another around the tight, twisty street circuit.

That gap to Verstappen is currently around 1.5 seconds#MonacoGP ?? #F1 pic.twitter.com/zaKyGVgjOS

Mazepin found himself in trouble with the stewards, shown the black-and-white flag on lap 15 for exceeding track limits at the Turn 10 chicane three times. Five laps later Norris was shown the same flag, Verstappen reported he was “happy” with his tyres and Lance Stroll, running P11, took some air over the inside Swimming Pool kerb.

A third of the way into the race and there were still no changes inside the top ten with the rest of the field running as they were after the opening lap. “It’s all going to start happening pretty soon,” Bono told Hamilton, “gaps are starting to form.”

Hamilton was the first of the frontrunners to blink, changing to the hard tyres on lap 30. He came out behind Perez and comfortably ahead of Giovinazzi. Bottas was in the very next lap but the wheel nut machining onto the axle as Mercedes attempted the pit stop, meant the wheel cannot be changed. His race was over.

Drama in the pit lane!

Mercedes cannot get the nut off the front right tyre… Bottas is OUT!#MonacoGP ?? #F1 pic.twitter.com/U1nQfz1eIK

Norris, Vettel, Gasly and Sainz all pitted with Vettel and Gasly both coming out ahead of Hamilton much to the Brit’s annoyance. “How am I still behind him? Come on, man,” he said, adding “What has just happened, guys? I’ve lost two places.” His rant continued for several laps.

Back at the front Verstappen pitted on lap 34, coming out P2 behind Perez who had yet to stop. With free air in front of him, Perez laid down fastest laps and he too leapfrogged Hamilton when he stopped.

Sebastian Vettel is proof that class is permanent. What a driver! pic.twitter.com/FfnWzC2vBG

The top 10 after two thirds of the race were Verstappen, Sainz, Norris, Perez, Vettel, Gasly, Hamilton, Stroll, who had yet to stop having started on the hard tyres, Ocon and Giovinazzi.

A lap later Norris, chasing a third F1 podium, lapped his team-mate Daniel Ricciardo before reporting that he was “struggling” on his tyres as Perez began to chase him down. Stroll eventually pitted on lap 59, putting on soft tyres and coming out P8.

Despite Sainz’s efforts to close in on Verstappen, the Red Bull driver was comfortably quicker and romped to the win 10 seconds ahead of the Ferrari driver. With Hamilton only seventh but with the fastest lap point to his name, Verstappen scored 18 points more and took the lead in the Drivers’ Championship for the first time ever, four points ahead of the Mercedes driver.

Sainz was second with Norris completing the podium ahead of Perez. Vettel was fifth, his first points with Aston Martin, with Gasly sixth ahead of Hamilton. Stroll, Ocon and Giovinazzi completed the points. It was Alfa Romeo’s first point of the championship. 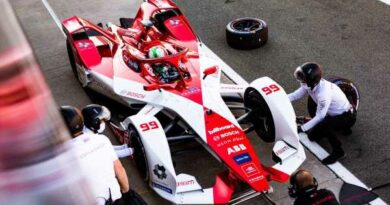 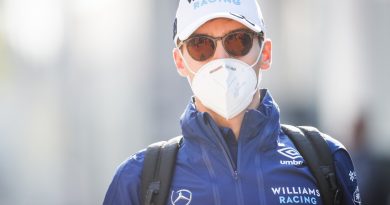 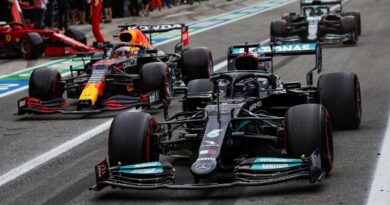 Max Verstappen: 'I don't think we can challenge Mercedes'