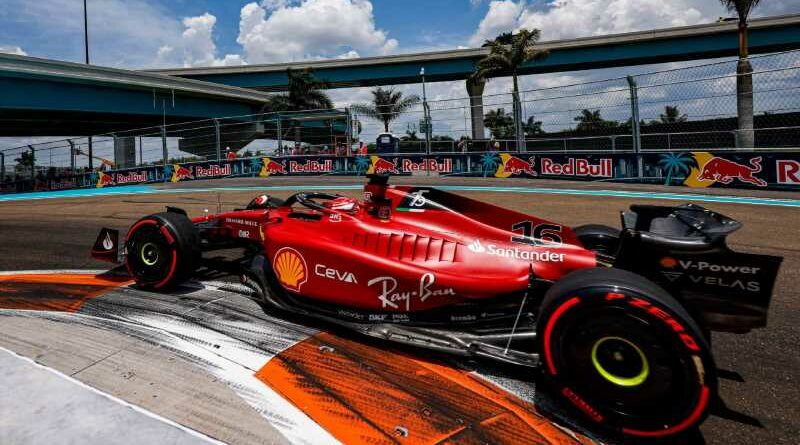 Charles Leclerc snatched pole position for the first ever Miami Grand Prix as Carlos Sainz made it an all-Ferrari front row in the Sunshine State.

Just when Max Verstappen looked like he would build on his Imola victory last time out by taking P1 on the grid for round five of the 2022 championship, he made an error on his final run and handed the initiative back to the title-race leader.

Leclerc and Verstappen have two victories apiece so far this year, the Monegasque holding a 27-point lead after the World Champion’s two retirements, and another thrilling battle could be in store between them at the Miami International Autodrome.

But Sainz, who has endured a poor run of form having exited the last two races early and crashed out of FP2 in Miami, is also right back in play and will be keen to avenge those disappointments by getting back on the podium at least.

Only 19 drivers took to the track for Q1 as Esteban Ocon was ruled out with a cracked chassis in his Alpine following a crash in FP3.

That meant only four more would drop out of the reckoning before Q2, and predicting who that would be became more difficult as the times came down rapidly along with the temperatures in the final third of the opening 18-minute session.

Fernando Alonso had a minor brush with the wall and Lewis Hamilton went into his final run needing to improve from P18, having had a lap time deleted for exceeding track limits.

The seven-time former World Champion was under pressure but got the job done easily and instead, along with Williams duo Alex Albon and Nicholas Latifi, it was Alfa Romeo’s Zhou Guanyu –  who was unlucky with traffic on his last attempt, encouraging his team to report it – and the surprising name of Kevin Magnussen, considering Haas’ promising performance in FP3, who bowed out at the opening hurdle.

Unsurprisingly, Ferrari and Red Bull locked out the top four places in Q1 with Leclerc fastest ahead of Verstappen.

Mick Schumacher, aiming for his first Q3 appearance in a traditional qualifying session, was straight out at the green light for Q2 on a set of used tyres but was quickly dislodged from the top spot by Sainz and Leclerc – who then gave way to Verstappen and Perez.

Whereas it was Hamilton up against the clock for Mercedes in Q1, it was Russell in Q2 for he had not set a time entering the last five minutes, wobbling and ‘porpoising’ through the opening sector before aborting the lap when he did try to set a time just before that point.

Russell’s next effort was better and pushed him up to P7, but it proved to be the Briton’s last go and as rivals went faster, he tumbled down the order to 12th – disappointing for the man who had headed the standings in FP2.

“Sorry for that, wasn’t good enough – didn’t have the confidence in the car today,” said the 24-year-old over the team radio.

A similar scenario befell Sebastian Vettel, while fellow multiple race winners Fernando Alonso and Daniel Ricciardo were surprise casualties too along with Schumacher.

Their bad news meant the opposite emotion for Lance Stroll, Yuki Tsunoda and Valtteri Bottas as seven of the 10 teams ensured they would be represented in Q3. Like Q1, it was Leclerc and Verstappen again at the head of affairs in that order.

Things we love to see:
Valtteri getting ready for Q3! 😍#MiamiGP pic.twitter.com/Mb829q6QTj

But in the opening runs of Q3, it was roles reversed. Verstappen dipped into the 1:28s for the first time to claim provisional pole position, but Leclerc and Sainz were both within a tenth and the rest, headed by Perez, effectively nowhere.

Of the leading contenders, Leclerc was ahead on the road for the final shot and he went fastest with Sainz also leaping ahead of Verstappen, who merely coasted in with no chance of improving his time after a mistake in Turn 6.

Perez held on to fourth for an all-Red Bull second row, while Bottas will be just in front of his former Mercedes team-mate Hamilton in fifth and sixth respectively. 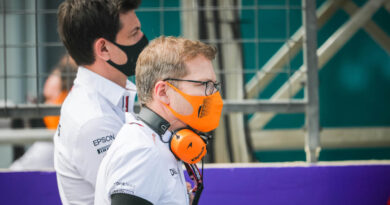 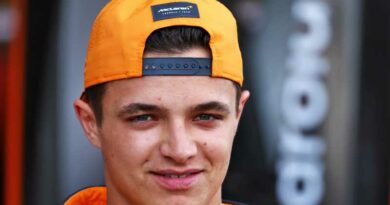 Mercedes ‘in no man’s land’, but Lewis Hamilton ‘incredibly adaptable’