After a chaotic Daytona 500 and an attrition-heavy road course race in the Daytona infield, today’s NASCAR Cup Series race at the Homestead-Miami Speedway was a welcome return to the more formulaic oval racing that will make up the majority of the Cup Series schedule. Sure, running the race under the heavily maligned high-downforce, low-horsepower package was far from a recipe for success, but the track is uniquely good, and a combination of high tire wear and the difficult course still made for an interesting first opportunity to see how the field has balanced itself out over the past offseason.

Early in the race, it seemed that the balance of performance had changed significantly. Chris Buescher, who drives for a Roush-Fenway Racing program that has not won a race since 2017 and has not won a non-pack race since 2014, charged to an early lead in a car that looked exceptional on mid-length runs under the sun, winning the first stage and fighting for the win in the second before fading. The 17 disappeared from the story entirely by the time the sun set early in stage 3, and Buescher would finish a disappointing 19th. His early competition, Brad Keselowski, would fade too, finishing just 16th after a strange late-race call to take tires when the rest of the field did not need to stop under green.

A yellow with seven laps to go in the second stage set up a small reset, with some staying out and others choosing to stop for tires before the additional caution for the end of the stage a few laps later. Hendrick Motorsports driver William Byron stayed out, and he was able to hold off the much faster Denny Hamlin to win the stage. Hamlin got caught speeding in the pit lane under yellow, and he would recover to just 11th over the final stage. That left three drivers contending for the lead late: Byron, Martin Truex Jr., and Byron’s newest teammate, Kyle Larson.

What followed was not much of a competition. Byron pulled away after a mid-stage restart, building a comfortable gap on the other leaders and never looking back. Truex and Larson faded themselves, eventually being passed by the hard-charging Tyler Reddick for second, and Byron grabbed the win, the second of his career and first on an intermediate oval. Truex and Larson finished fourth and fifth, respectively, while Kevin Harvick completed the top five.

The biggest shock of the race, however, came in sixth. That’s where Michael McDowell, the surprise Daytona 500 winner who had recorded just twelve top-ten finishes over his 13-year career before this season, ended up, his third top ten result in a row. McDowell has never finished better than 23rd in the series standings, but he suddenly finds himself in sixth, and already effectively locked into the playoff by virtue of his win at Daytona. Front Row Motorsports has never been considered a competitive team, but their sudden pace has been extremely encouraging, and their ability to plan for the last ten races of the season knowing they are likely to be in the field no matter what they do before that point will give them some time to experiment and prepare to optimize their performance in those races.

Other notable finishers include Ryan Newman, Roush-Fenway’s other driver, in sixth, and Kurt Busch, who ran in the top five for most of the day before being forced to pit in the middle of a long stretch of green flag running, in eighth after a stellar recovery.

Byron joins McDowell and Christopher Bell in securing what is effectively an automatic bid into the NASCAR playoffs. With 23 races remaining, 14 other drivers would have to win races before one of the three could be bumped from the playoff field. Among non-winners, Denny Hamlin leads the playoff standings over Kevin Harvick and Joey Logano.

An early stretch of races at intermediate tracks continues next weekend, with NASCAR going to the Las Vegas Motor Speedway. Notably, that will be the first race of the season at a track that will later show up in the playoffs. 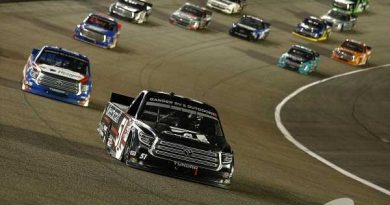 Busch bounces back from penalty to dominate Miami Trucks 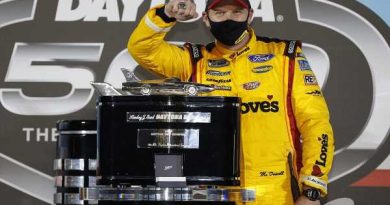 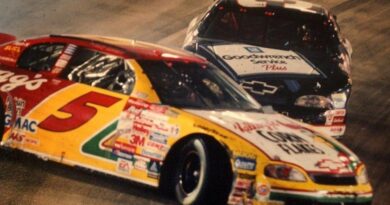