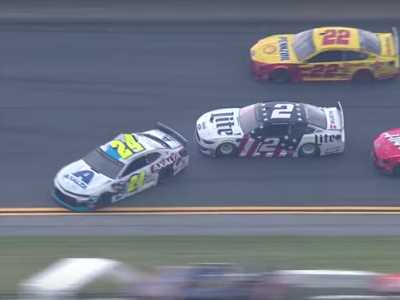 The controversy in NASCAR this week has started two days before the race.  Late in Friday’s final practice for Saturday nights Monster Energy NASCAR Cup Series Coke Zero 400 at Daytona International Speedway, William Byron’s Hendrick Motorsports Chevrolet was sent down the track entering as a large group of cars entered turn 3.  Byron was able to keep the car from spinning but there was moderate damage to the car.

The near spin came courtesy of the Ford of Brad Keselowski. Replays showed Keselowski making contact with Byron. Byron was able to drive his car back to the garage.

“I thought I was clear there and he just decided to drive into the right rear,” Byron said. “I really expect that, that’s alright. It’s not like I changed four lanes down the backstretch and blocked him. I was just kind of holding my lane and he just used his run to drive into my left rear.”

While the damage didn’t appear too heavy Byron’s team opted to swap to their backup car.

For his part Keselowski said he was trying to send a message.

“I keep telling these guys I’m not lifting,” Keselowski said.  “I hate it for his team that they have to work on their car and so do ours, but just trying to send a message that I’m not lifting.”

“I had a big run and put me in a position where I had to lift and I keep telling these guys I’m not lifting.  I hate it for his team that they have to work on their car and so do ours, but just trying to send a message that I’m not lifting.”

“I’m tired of getting wrecked at plate tracks,” he added. “I’ve been wrecked out of four of the last five races quite honestly because I’ve let people pull moves on me like that.

“They’re all watching, they know.”

Since he will go to a backup Byron will start from the rear of the field Saturday night. 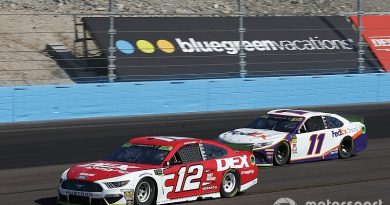 Blaney gambles, but two-tire call ‘not enough’ to advance