Instead, it was Kyle Larson, the man, who needed to put in the work after he was suspended by NASCAR, fired from Chip Ganassi Racing and spent a year in exile from the mainstream to reflect and atone.

That arc isn’t over simply because he won a Cup race with Hendrick Motorsports in just his fourth race back.

Larson has been permitted the opportunity to race at the highest levels of NASCAR again because he earnestly began the process of rebuilding his reputation amongst the Black community in the aftermath of his using a racial slur during an online iRacing broadcast during the pandemic shutdown.

Larson immediately apologized, but the real work is what came after, working with the Sanneh Foundation and the Urban Youth Racing School — much of those efforts going un-publicized and unrecognized … as it should have been.

Larson appeared contrite during a CBS interview in October where he said he knew “deep down” that he wasn’t a racist and that he had learned more since the incident than throughout his entire life. He attended a George Floyd memorial with the Sanneh Foundation – a holistic youth development program founded by footballer Tony Sanneh.

Larson has referenced conversations with Olympian Jackie Joyner-Kersee, multimedia executive Kevin Liles and Mike Metcalf — a Black crew member that was on his No. 42 team for several years.

He says letting Metcalf down was akin to disappointing family.

The incident was from a place of ignorance and not malice, but that isn’t resolved or redeemed simply because he won a single race, early in his return.

Larson knows that too, as he is still in the planning stages of a charity in coordination with Sanneh and the UYRS.

“It’s exciting stuff to start my own foundation, the Drive for 5 program,” Larson said. “We’re still trying to kind of work through the small details now. But really looking forward to kind of getting out more into the community and continuing to do good things, like I had done all throughout last year.

“It’s been unique to kind of learn more about the foundation side and charity side. Still a lot to learn to go about it. Glad to get it started and get it in motion now.”

Those are the races Larson needs to win to complete the redemption arc, and just like the start to the racing season, Larson is putting together top-5s and top-10s on that front, too.

The work has been recognized.

Bubba Wallace, who made one of the earliest phone calls to Larson to understand why he said the slur las year, was also one of the first to offer a congratulation in Victory Lane.

Larson appreciated the gesture from a driver he has raced for almost a decade dating back to their K&N Pro Series days.

“It meant a lot to have Bubba come to Victory Lane,” Larson said. “He always does a really good job of congratulating the winners. Yeah, I saw him waiting to say hi or whatever to me as I ran over there, and just had a quick moment with him. He said congrats. He’s always believed in me. So that was special.

“Just really cool to have him come by and take time out of his post-race where he could be on his way to the airport to go home.”

Proud and happy for @KyleLarsonRacin

Told him way to keep his head thru it all! We all knew it was a matter of time..

While Sunday wasn’t a story about redemption, it absolutely was one about validation, entirely within the confines of competition.

It was one of the greatest dirt seasons ever, especially when considering the different skillsets needed to excel in each of those disciplines, and the fact that Larson had never competitively raced a Dirt Late Model prior to this summer.

There was a subset of the racing community that championed the narrative that Larson was becoming one of the greatest all-around racers of recent memory, drawing parallels to AJ Foyt and Tony Stewart, due to his resume across multiple types of race cars.

Lost in the controversy of the summer was that he’s won back-to-back Chili Bowl Midget Nationals.

Meanwhile, the opposition stated that Larson had only won six times in 226 NASCAR Cup Series starts, which was a far cry from the success needed to have earned any kind of emerging legend label.

With his victory on Sunday, Larson took a significant step forward into becoming the NASCAR championship threat needed to validate comparisons to Stewart, Foyt or even childhood hero Jeff Gordon.

With Chip Ganassi Racing, Larson was with an above average, but not elite Cup Series program. Depending on the metrics one values, Larson either carried his expected weight while driving the No. 42 team or even punched above it.

Four of his six victories had come at two-mile tracks and with the low downforce competition package, a combination that suited his dirt background tremendously.

A common slight against Larson was that he hadn’t won on an intermediate track, but there were certainly close calls. Everyone remembers the slide job loss to Kyle Busch at Chicagoland in 2018 or the countless laps led at Homestead in the championship race.

All told, Larson finished second nine times on intermediates before Sunday, so there was an air of inevitability with this outcome.

Even before his suspension and firing, Larson was going to land with a championship caliber program, likely Hendrick or Stewart-Haas Racing.

At 28-years-old, he was going to be given the opportunity to validate the talent that provided him a paid job driving race cars from his teenage years onward. For the first time in his Cup career, he will not bring a knife to a gunfight, and will instead have a pistol fit for a shootout.

And based on the first month of the season, and with the team that just captured the Cup Series championship with Chase Elliott, Larson will now have every chance to validate the lofty expectations associated with being a potential all-time great.

THE ‘R’ STANDS FOR RESTARTS

The Pennzoil 400 was an overall entertaining affair with various storylines and a naturally occurring finish without any tomfoolery at the end.

That was especially refreshing.

But I just can’t move past the herculean efforts by the television broadcast and NASCAR’s IMC department to use the first stage as agitprop to push the virtues of the NA18D low horsepower, high horsepower rules package.

FOX Sports even produced the most awkward video package everthat essentially explained how Cup Series engines are capable of producing over 900 horsepower, but the racing product is only so awesome because we’ve literally choked them in half.

That’s one hell of a sell job.

In actuality, the first half was so eventful because NASCAR threw three cautions in 80 laps for an average green flag run of 24 laps.

For the past 12 months, NASCAR has essentially implemented a fourth stage in the guise of a competition caution in the middle of the first stage to allow teams to check their tire wear in the absence of practice sessions throughout the weekend.

However, teams aren’t required to come down pit road, and only have the option to check or change their tires.

These were essentially inversions.

Which, by the way, is awesome, because it’s essentially something I proposed in 2018. That column, which called for inverts after stage points were paid out, was shot down because the idea felt too gimmicky.

What a world we live in now where throttled engines and big ass spoilers are celebrated.

It wasn’t the package that made the racing so awesome on Sunday, but rather the number of cautions in the first stage combined with the fact that package restarts are legitimately chaotic.

But 15 laps into a run, and cars began to single out, and were spread out no different than big power, smol blade races — except for the tire management and talent required to do anything other than stay full-throttle around an intermediate track not unlike a trainer kart race.

So, when NASCAR and FOX tries to sell this package, in advance of the Next-Gen car being built with these same elements for intermediates, realize they’re actually selling you on restarts.

Perhaps the times are changing, but NASCAR fans once rejected racing that needed continuous cautions to spice up the entertainment product. The 2008 Brickyard 400 was universally reviled because NASCAR was forced to throw cautions every 10 laps due to a faulty tire.

Today’s audience essentially begs for it.

It’s because the R actually stands for Restarts. 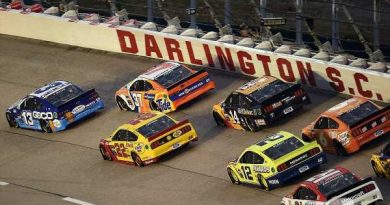 NASCAR turns once again to Darlington to ‘reset’ its season

Tony Stewart Frustrated with Lack of Communication from NASCAR 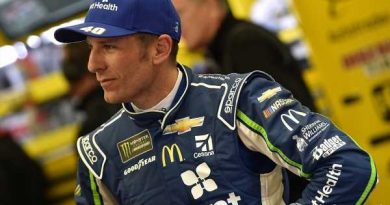 Jamie McMurray returns for another shot at the Daytona 500