After final practice for the first NASCAR Cup Series race on dirt in 51 years, a group of Joe Gibbs Racing drivers huddled together in Turn 4 for an informal debrief.

Following two Truck Series and Cup practice sessions that spanned four hours, right side tires began to blister and show cords due to the track slicking off but not taking much rubber. That essentially created track conditions that raced similar to slick pavement during the summer.

So, what was the topic of conversation as Hamlin and his teammates peppered dirt ace Christopher Bell with questions?

The temporary dirt that covers Bristol Motor Speedway came from a 30-mile radius of the speedway. It’s a local red soil called ‘Bluff City Clay’ that has a considerable amount of sand mixed in. That makes it more abrasive than its Midwestern counterpart.

Additionally, 250 laps on Sunday will mark the longest dirt race in the history of the discipline across any division with no time between segments dedicated to reworking the surface.

In a traditional dirt racing event, 30 minutes to an hour is reserved for adding moisture and taking a tiller to dig up the top layer of clay, before flatting it back out in advance for the next series of races. That creates a tacky racetrack that encourages multiple lanes of racing.

Due to television limitations and expectations, the track will only be reworked before the heat races that set the starting lineup on Saturday night, again before the Truck Series race that follows the heats, and one more time overnight before the 250-lap Cup Series main event on Sunday afternoon.

Complicating matters is that the forecast over the weekend includes several passing storms — making it all the more challenging to come up with a plan for either the sanctioning body or race teams.

Speedway officials will have to wait before a storm passes before reworking the surface.

Regardless of how track preparation goes, NASCAR Cup Series cars weigh 3,400 lb. and produce 750 horsepower with the attached tapered spacer. That is the reason for the dry slick and why the track will begin to take rubber and generate right side cording.

It also created a predominant single-groove track around the bottom — similar to classic Bristol Motor Speedway before its 2007 reconfiguration.

That’s especially true for the Cup on Sunday afternoon race compared to the Truck Series race on Saturday night, since a day race dries the track out quicker than its nighttime counterpart.

“I feel like if they would just go out there and till the top three quarters of the racetrack, and really water it and pack it in, we’d be running up there instead of running on the bottom,” Briscoe said.

“So, it just comes down to track prep. That’s the key ingredient in dirt racing. You can really control which lane is faster … so hopefully they can do something track prep wise. Obviously, the more moisture there is, the better the tires will last as well.”

The most likely solution is NASCAR granting teams another caution and set of tires.

As it stands, the Food City Dirt Race was scheduled for three stages, with breaks coming on laps 75 and 150, with a 100-lap final stage. However, numerous teams were cording their tires after 20 laps in final practice, and do not feel like they could make it 100 laps on the final stage.

There are no pit crews on hand this weekend and teams are only allowed to change tires during the stage breaks or if they receive approval from NASCAR after damage or a flat.

Crew chief for William Byron and the Hendrick Motorsports No. 24 team, Rudy Fugle, endorsed the idea of a fourth stage break.

“I think we need the tires,” Fugle said. “Without the pit crews here, we need the caution to break it up and make it even.

“A lot of different things can go into that, but I just think 100 laps is stretching it right now. Unfortunately, that’s the way this track is right now. It could get better or it could get worse too.”

“I think we probably need to do something,” Briscoe said. “Our car, 20 laps and we’re already showing cords. They’re just in a tough box because there’s no pit crew here, so if something happens under green, you’re in a tough situation.

“Me, personally, I would like to see something halfway through the final stage, cut that stage in half, and I think it would be better for the teams. You see in Sprint Car racing where guys are running on a rubbered down track and blowing tire after tire and you don’t want to see that here. Splitting it down the middle wouldn’t be a terrible thing.”

Hamlin believes an extra stage and an additional set of tires is the most likely outcome but would prefer a tire management race where drivers have to manage their tires over the final 100 laps.

“I would be surprised if they don’t make a change to the rules, giving us another set of tires and a caution,” Hamlin said. “But if they don’t, it’s the same for all of us. You just have to do it better than everyone else.

“Selfishly, I would prefer a tire management race because I like saving my stuff, so I’d say leave it as is, but I doubt that will happen.”

That’s a sentiment that was shared by JTG-Daugherty Racing driver Ryan Preece, too.

Regardless of which direction NASCAR chooses to go, Briscoe is convinced both approaches will create an entertaining race.

“It defitely surprised me. The track didn’t really rubber-up and I think with this red clay , it’s just way more abrasive. It’s realy gritty and it just chews tires up. If the track gets more moisture in it, who knows, it’s just a tough box for everyone involved.” 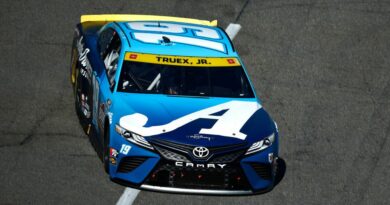 Why Martin Truex Jr. Has Reason to Like His NASCAR Cup Title Chances at Phoenix 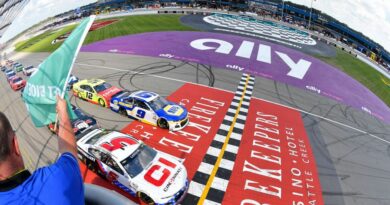