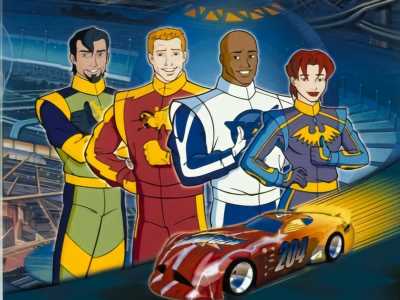 When the email titled “NASCAR Racers” flashed across Mark Edens’ screen earlier in the month, he conceded it was probably the first time in 15 years that it was anything more than a passing thought in the back of his mind.

It’s not uncommon for the veteran writer to get interview requests concerning Teenage Mutant Ninja Turtles, RoboCop, Exosquad or X-Men: The Animated Series—especially X-Men given its renewed popularity right now as part of the initial Disney+ offering.

Edens, who co-wrote the NASCAR Racers animated series alongside his brother, Michael, will be the first to tell you that this was not among his most popular works. Even further, both were surprised that it actually lasted two seasons from 1999-2001.

The show featured two rival NASCAR organizations—Team Fastex and Team Rexcor—competing against each other in the futuristic NASCAR Unlimited Division.

Instead of racing on anything that closely resembled an intermediate track, the Unlimited Division’s signature venue is best described as an animated Hot Wheels course, replete with high-speed loop-de-loops. The show also featured off-road courses and something called The Motorsphere.

The good guys all raced for Jack Fassler’s Team Fastex, and the dastardly heels drove for Garner Rexton’s Team Rexcor.

There was even a first episode defection.

The entire premise is best described as G.I. Joe versus Cobra but with race cars—and the bad guys have infinitely cooler weapons.

There were other teams too, of course, but over two years of futuristic NASCAR racing, no one else ever received the spotlight.

Like all Saturday morning cartoons, NASCAR Racers was intended to sell toys above all else. The 1999 press release announcing the debut of the series showcased four cars with “unique morphing features to reveal wings, power boosters, stunt wheels and other incredible technology.”

Talk about the Car of Tomorrow.

The admittedly catchy theme song, “Extreme Machines,” was performed by Jeremy Sweet of Power Rangers and Dragon Ball Z fame. There were comic books, video games and clothing lines devoted to the project, too.

Meanwhile, from the sanctioning body’s standpoint, the show was intended to introduce NASCAR to children—important given the sport’s long-standing older-leaning demographics.

“One of NASCAR’s primary objectives is to attract more young fans to the sport to help grow our fan base,” said George Pyne, NASCAR’s vice president of marketing at the time. “Both NASCAR Racers and the toys based on the series allow kids to experience NASCAR and motorsports in a totally unique way while also encouraging them to fantasize about the limitless possibilities of the future of NASCAR racing.”

Upon taking their first glance at NASCAR Racers in over a decade, the brothers both agreed there was much to enjoy about the nuances of adopting the colorful world of stock car racing and repurposing it within a futuristic science-fiction setting.

The Edens made main character Mark ‘Charger’ McCutchen a third-generation driver, which was a nod to both Dale Earnhardt Jr. and Adam Petty. There was a fight between drivers in the pilot, with Lugnut the crew chief comparing the competitors to Donnie Allison and Cale Yarborough.

“That wouldn’t mean anything to the kids watching,” Mark said. “But we wanted to throw a nod to the parents who were diehard NASCAR fans. We wanted it to feel as authentic as it could within the boundaries of science fiction.”

Most importantly, the Edens were able to do something they never could have done with regularity in X-Men, Ninja Turtles or RoboCop.

“The good guys didn’t have to win in a sporting world,” Michael said. “This wasn’t a matter of saving the world. The story was the race itself and who was going to win. And when Rexcor won, it’s because they cheated. That gave us depth of character

“That gave NASCAR Racers a different texture. It felt more real. You knew the good guys wouldn’t win every time.”

To his point, how often did the Shredder or Magneto win? Meanwhile, Fastex drivers won 13 races, but Rexcor cheated its way to five during the life of the program.

“Good guys didn’t always win,” Mark said. “We set it up that way. We didn’t want it to be so one-sided. We wanted it to be true to the sport. We tried to use those moments to build character.”

Despite growing up in central Tennessee, the Edens were not NASCAR fans.

Michael attended several races as a child at Fairgrounds Speedway Nashville and was excited to hear about the efforts to bring NASCAR back in the coming years.

“It was a great experience,” Michael recalls. “It was just so loud back then. You could feel it in your stomach when they drove by. My whole body vibrated. It almost made me throw up. It took me awhile to get into it.”

Mark didn’t attend a stock car race of any kind until he was hired to write the script of the animated series. NASCAR flew him to the 1999 Coca-Cola 600 and gave him an all-access hot pass to learn about the world he would soon incorporate into animated form.

“Growing up in the South, I didn’t have a prejudice against NASCAR,” Mark recalled. “It percolated into everything southern back then, but I just didn’t have the chance to attend a race until we were hired for the show.

“I really enjoyed that garage tour and watching the race with the Frances that weekend. It gave me the perspective I needed to do the show right.”

As was the case with their other projects, Mark wrote the outlines of every episode and Michael turned that into a television script.

Mark said it was his decision to make the show about a NASCAR of the distant future, needing a premise that could entice kids and lead to an interesting toy line.

“The problem with doing a sports show for kids is that you’re competing with the real thing,” Mark said. “Why wouldn’t you just watch the actual race? You also have to come up with something that would compete against other cartoons and comic book stories.

“NASCAR agreed that we needed to do something that was over the top.”

Mark said the scripts were sent to NASCAR for approval, but they never rejected anything that was submitted.

“They were protective of the brand, I’m sure,” Mark said. “But they were really easy to work with. We didn’t get anything but positive feedback.”

Mark believes there is even a series bible lying around his Kentucky office somewhere, but appropriate of the era, it’s on an unmarked floppy disk that would be nearly impossible to identify without a lot of work.

Ultimately, both of the Edens brothers found it refreshing to be reminded of NASCAR Racers on the 20th anniversary of its debut on Nov. 20—one day prior to Dale Jarrett clinching his only Winston Cup Series championship at Atlanta Motor Speedway.

The Edens frequently travel the county as part of various X-Men Comic Con panels alongside collaborative partner and fellow University of Tennessee graduate Eric Lewald, but they have never been asked about NASCAR Racers—until now.

“Obviously, comic books are really popular right now,” Michael said. “X-Men is probably what we’re most known for. But we’ve done a lot of different projects and it’s nice to know that we made a lot of different things that people still remember 20 years later.” 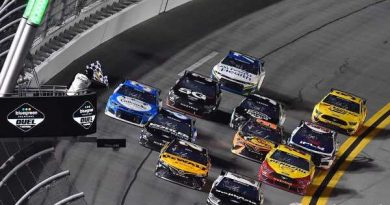 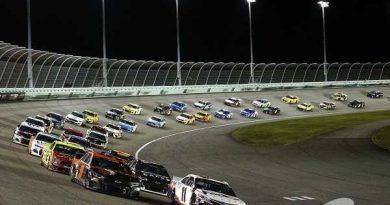