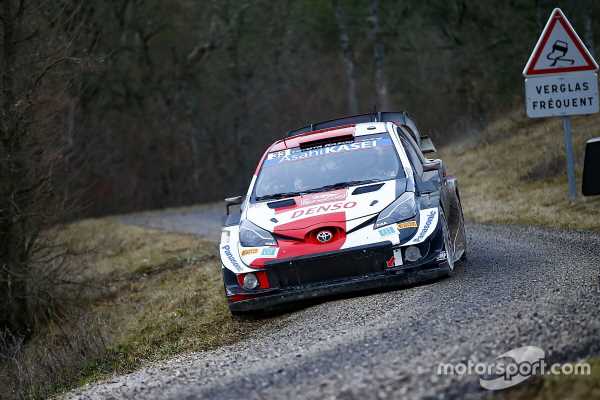 Britain’s Elfyn Evans holds the overnight lead in Monte Carlo as Toyota seized the initiative on the opening round of this year’s World Rally Championship.

A very early alarm call awaited the mechanics and crews in readiness for an 06:10 start time, the schedule for this weekend’s event being dictated by local COVID-19 measures.

Compliance meant that the first two stages of the day would be run in the dark and, with uncertain conditions in the mountains, this led to plenty of hesitancy among the crews which handed a clear advantage to seven-time Monte winner, Sebastien Ogier.

Overnight leader Ott Tanak struggled to match his early form. His main issue came from being hindered by his Hyundai’s engine stalling in the hairpins, a recurrence of a problem that dogged the team in 2020.

Tanak went with the same tyre selection as the Toyotas, with a mix of four super soft tyres and two studded full snow tyres to tackle the peaks. The Estonian’s team mates, Thierry Neuville and Dani Sordo, meanwhile went out with three of each type.

Tanak’s cautious approach in the darkness saw him finish fifth on the first stage of the day and drop to fourth overall behind all three of the front-line Toyotas.

Ogier won the stage but Kalle Rovanpera assumed the overall lead before his illustrious team-mate let rip through the next stage to take control of the event.

In Ogier’s wake, Evans recovered from a half-spin on the first stage of the morning to take second after Rovanpera incurred a 10 second penalty for late check-in.

Notwithstanding Rovanpera’s transgression, all three Toyotas pulled away from Tanak, their closest challenger, while the tyre choices of the other Hyundais put them in all sorts of bother.

Sordo’s car was running crabwise through the stages on its odd mix of rubber, while Neuville was embroiled in one drama after another.

The morning loop ended with Ogier 11.3 seconds ahead of Evans but the positions were reversed on the first stage after service when Ogier suffered a puncture and a spin that cost more than half a minute in total.

The seven-time champion was livid and made his feelings clear when he reached the end of the stage. “I mean we knew this tyre was very weak for punctures and unfortunately it’s happened already,” he said.

Rovanpera lost half a minute after going off into a field, which allowed the ever-consistent Evans through to a lead of 20s over Tanak, with Ogier a further 3s behind.

Despite being forced to put on a studded tyre to replace his punctured wheel, Ogier harnessed his frustration to light up the final stage of the day. He swept through in a time that immediately claimed back 16s from Evans’s lead.

“I was too careful probably in some places but the car just has a mind of its own sometimes… so much aquaplaning and the roads are so narrow,” Evans said. “It’s a great time from him (Ogier).”

Tanak continued with his solid run and the other Hyundais had a much better setup for the afternoon loop.

On the final stage of the day, Sordo was just 1.3s off Ogier’s stunning benchmark time.

This increasing good cheer within the Hyundai camp was nevertheless tempered on the final stage when Pierre-Louis Loubet, in the team’s older-spec car, aquaplaned head-first into a rock face.

Neither Loubet or co-driver Vincent Landais were injured, but it is uncertain if the car can be repaired to restart the event on Saturday. The stage was red-flagged soon afterwards.

In WRC2, it was the veteran Andreas Mikkelsen who put all his experience to work at the wheel of his Skoda Fabia.

The Norwegian spent the day building a lead almost a minute over the M-Sport Fiesta of Adrien Fourmaux, while the train of Citroen C3s at the head of WRC3 rolled on with Yohan Rossel maintaining his lead over Yoann Bonato and Nicolas Ciamin. 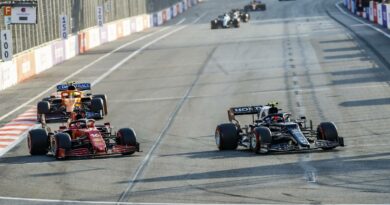 Pierre Gasly: Drivers like “lions out of a cage” at the restart 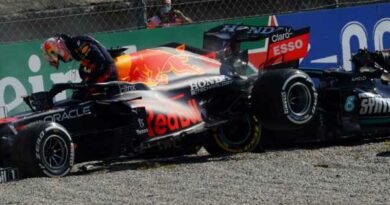 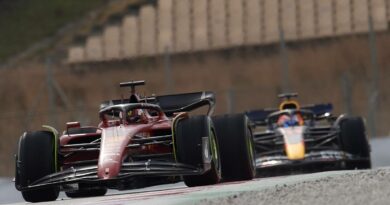 Ferrari "chose to be disciplined" when evaluating their Barcelona test performance