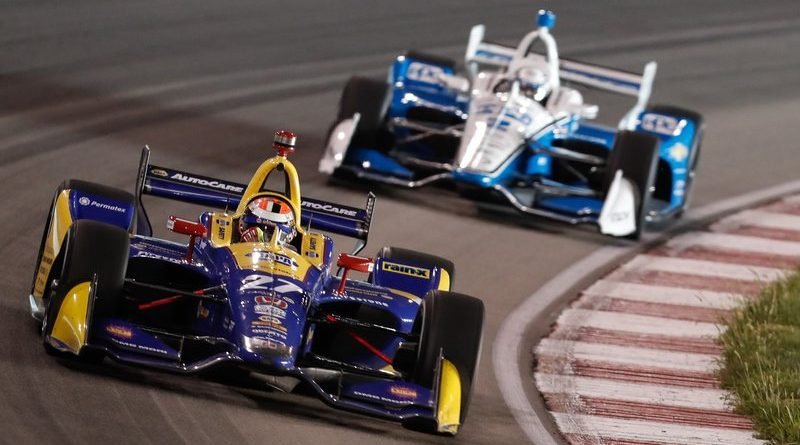 Alexander Rossi and Josef Newgarden will continue their championship battle on Saturday night at Gateway.

Josef Newgarden’s words keep saying “not so fast” but his actions and performance is befitting of a coronation.

The 2017 NTT IndyCar Series champion took the next step to his second title in three years by capturing the pole for Saturday night’s Bommarito Automotive Group 500 at World Wide Technology Raceway near St. Louis.

In addition to valuable track position for the start of the race, the distinction also earned him one more championship point over Alexander Rossi with just three races remaining at Gateway, Portland and Laguna Seca.

Officially, Newgarden cannot earn his second championship on Saturday night, but with a win, he should probably consider pre-purchasing party favors for the banquet afterparty.

Here’s a short list of what to watch for at 8:45 ET on Saturday night on NBCSN.

ONE GROOVE OR TWO?

With a new grippier left side tire compound, Team Penske driver Will Power believes a second lane for passing might be possible if enough drivers move up to clean-off the racing surface.

“Well, he can go right on ahead,” Rahal said with a laugh.

So was Alexander Rossi.

“Absolutely not,” he said.

Four-time champion Sebastien Bourdais says he is grateful to be starting second on Saturday due to the expected racing conditions.

“Last year was obviously very much of a struggle to pass,” Bourdais said. “I think it put a lot of emphasis on qualifying and track position. I don’t think it’s going to be very, very different. I think the package we have makes it very difficult to be flat on your line in (Turns) 3 and 4, and therefore once you get some dirty air, it’s impossible to be flat. So, building the run from out of 1, 2, to back around is just hard.

“Last year we saw a lot of differing strategies with some fuel saving and things, which definitely mixed things up and opened some opportunities for passing. So hey, if it’s a very static race, starting second, I think I’ll be all right with that.”

Polesitter Newgarden knows better than anyone what actions have to be taken when there is only one groove. He won here in 2017 with a daring full-send pass into Turn 1 on teammate Simon Pagenaud that propelled him towards the championship.

Newgarden expects the passing to be bold, daring and extremely difficult.

“This place, because the straightaways are just long enough, I think it invites a little bit more of that late move,” he said. “You saw last year, too, every move is late. You’re kind of late into Turn 1, and it’s just the style of racing here. So, I think everyone kind of knows the drill after a couple runs.

“It’s really going to be kind of down to, is it different than last year as far as lane usage. We were kind of pinned on one lane last year, which hurts the racing, unfortunately. But can we open that up this year, will we get a second lane? That’s what we need to figure out tonight.”

Can anyone stop Team Penske on ovals? Roger Penske’s squad is undefeated while exclusively turning left dating back to Power’s victory at Gateway LAST YEAR. Pagenaud won the Indianapolis 500 and Newgarden won at Texas and Iowa.

And wouldn’t you know it, Penske drivers are starting first, third and fourth with only Bourdais separating them.

Pagenaud has not finished outside of the top-10 on an oval in two years with an average finish of 5.2 in that span.

As often is the case on an IndyCar oval, the path to victory lane runs through the Penske tandem. 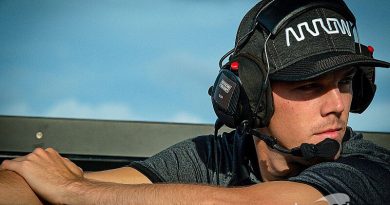 Promoted: Why Oliver Askew can be IndyCar’s next star rookie 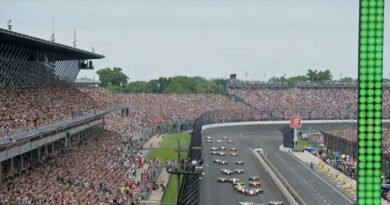 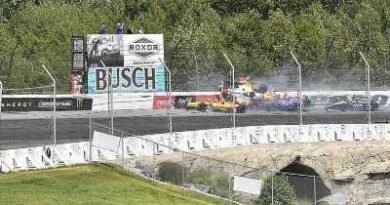