George Russell thinks anyone heading into Mercedes would be “naive” to think they could have a comfortable time against Lewis Hamilton.

After Valtteri Bottas was announced as an Alfa Romeo driver on Monday, the path has opened up for Russell to take the vacant Mercedes seat next season alongside Hamilton.

The current Williams driver said it would be a “dream” to be able to fight directly against the most successful driver in Formula 1 history, but knows he will have an almighty task ahead of him to assert himself at the start of his Mercedes career.

“I don’t think any driver would be naive to think they could go up against a seven-time World Champion and have it easy,” Russell told Jenson Button in an interview with Sky F1.

“Because a guy like Lewis is who he is because of his speed and determination.

“But that’s every driver’s dream – and I’ve said for the last three years that it would be my dream to be team-mates with Lewis because I want to learn from the best and to go up against the best.

“Let’s see what next year brings.”

Tough weekend but a great effort from the team in the garage and an amazing track to drive. Respect to the fans for making this place rock. On to Monza. pic.twitter.com/HEYwEkXaEk

Hamilton and Max Verstappen have both been complimentary about Russell’s talent recently as he prepares to make the step up to a Mercedes seat.

Verstappen predicts Russell will make life “very difficult” for the seven-time World Champion, who will be entering his 10th season as a Mercedes driver in 2022.

The young Briton was pleased to take the compliments, but knows he still needs to deliver at race weekends.

“These are guys I respect a huge amount,” Russell said. “Lewis is obviously the greatest of all time and Max…everyone knows how fast and talented he is.

“So to hear those comments is always a nice feeling. But equally, these comments don’t make you faster on track.”

After gaining his first F1 podium in Spa, “next year” is when the Briton feels his first win will come.

But when asked if he had prematurely revealed his next move, Russell quickly retorted: “Big regulation change next year!

“Williams in 2013 finished ninth in the Constructors’ and the following year they were fighting for victories and pole positions.

“Regardless, I think next year will be an exciting year for Formula 1. And I’m glad to be here.” 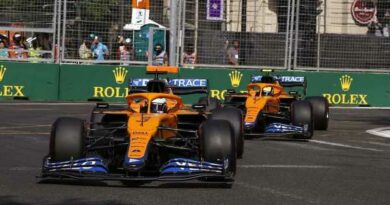