If you don’t have a car, getting around in the U.S. can be pretty difficult. Interstates and other regional highways snake through nearly every major city in the country, making travel by automobile by far the easiest way to from point A to point B. That convenience came at a big upfront cost, however, one that fewer people will remember as time goes on. Beginning in the 1950s, to make room for America’s new expressways, a whole lot of buildings—houses, businesses, communities, entire blocks of cities—had to be knocked down. Long erased from view, those neighborhoods are slipping further and further towards the void.

But there’s an unlikely savior preserving their memory: the real estate site Zillow. As first flagged by David Cole on Twitter, in certain cities, zooming in on Zillow.com’s satellite view function will reveal the old property lines and street grids of the generally working-class and minority neighborhoods destroyed to make way for the country’s Interstate Highway System. 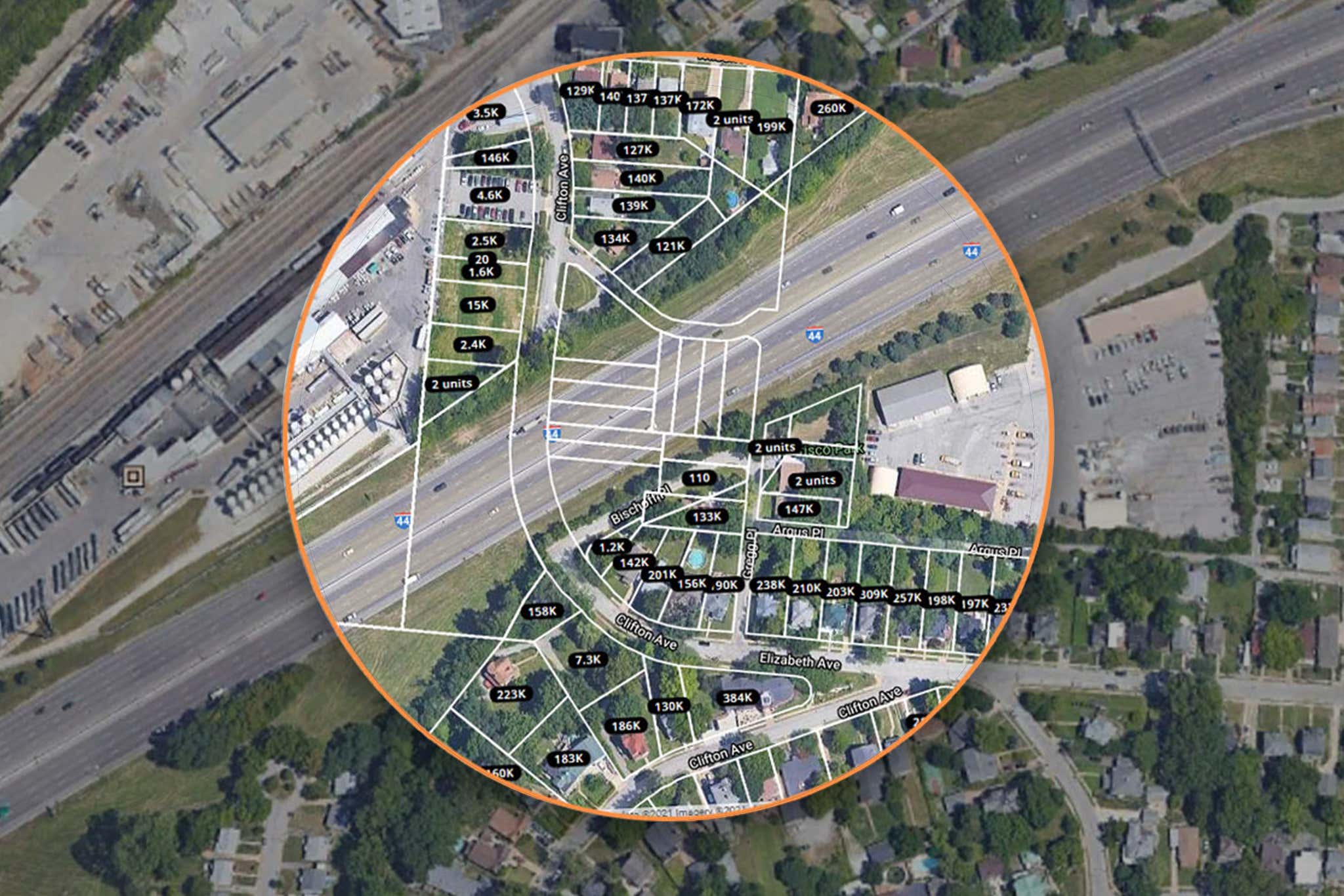 The photo above is an overhead view of a little piece of St. Louis, Missouri, near Interstate 44. The area inside the orange circle is from Zillow; it shows the old boundaries of privately-owned plots before the houses on them were demolished to make room for the highway. As you can tell, there used to be a whole neighborhood there and a continuous street called Clifton Ave. There still is a street called Clifton ave there, actually. It’s just bisected by I-44, called the same thing on either side. That’s… probably lead to some confusion over the years.

This trick doesn’t work everywhere, and not always city-wide in the places where it does. Some counties don’t report that these plots even exist anymore—rendered unusable by the interstate, the old lines have been struck from the records. But in a lot of major metropolitan areas especially in the Midwest, you can zoom in close enough on a bit of highway or interchange and see dozens of examples of the same thing. Cities like Milwaukee, Cincinnati, Chicago, Pittsburgh, and even Tampa, Florida will all project these ghostly outlines of what came before the highways. 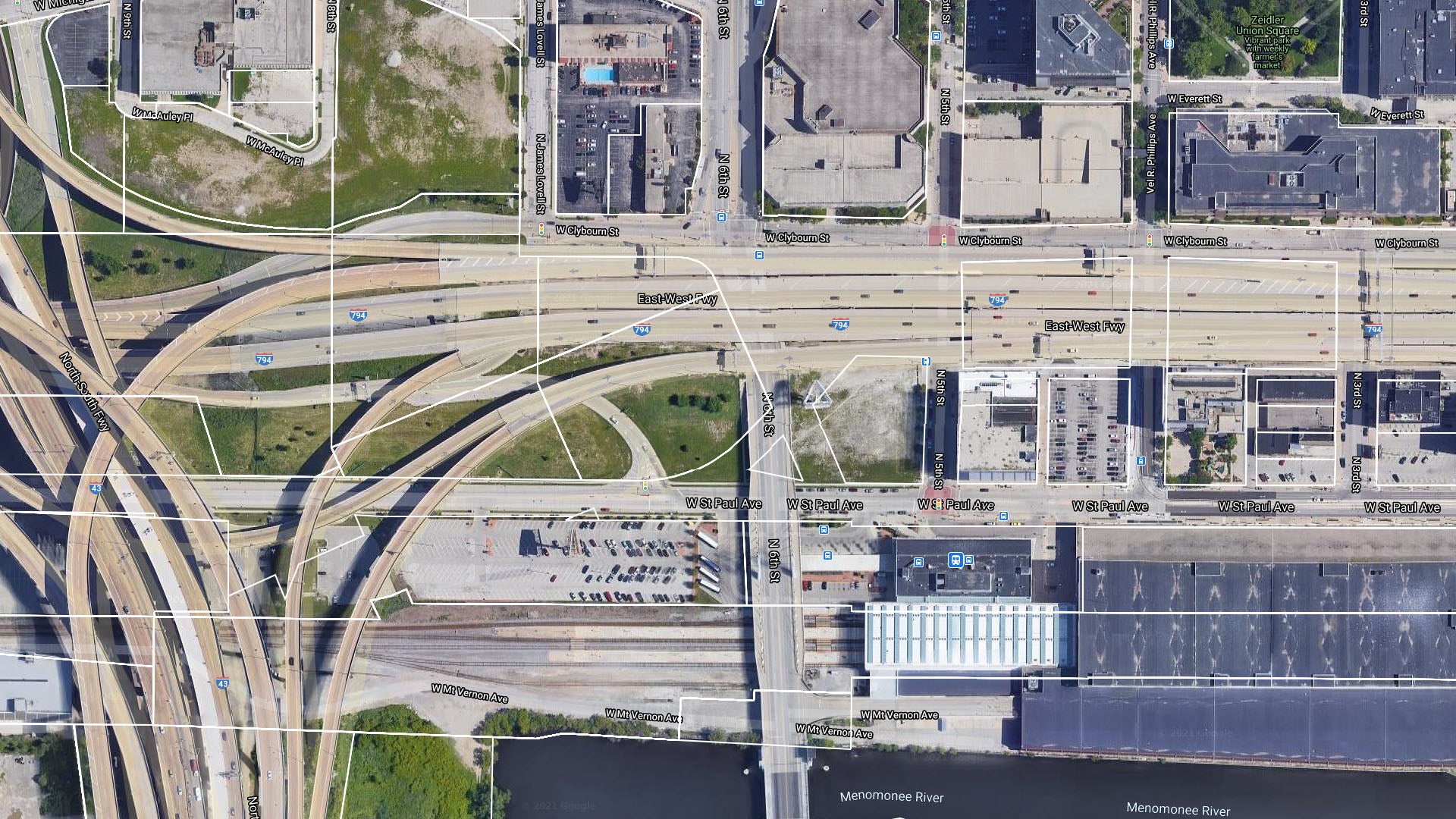 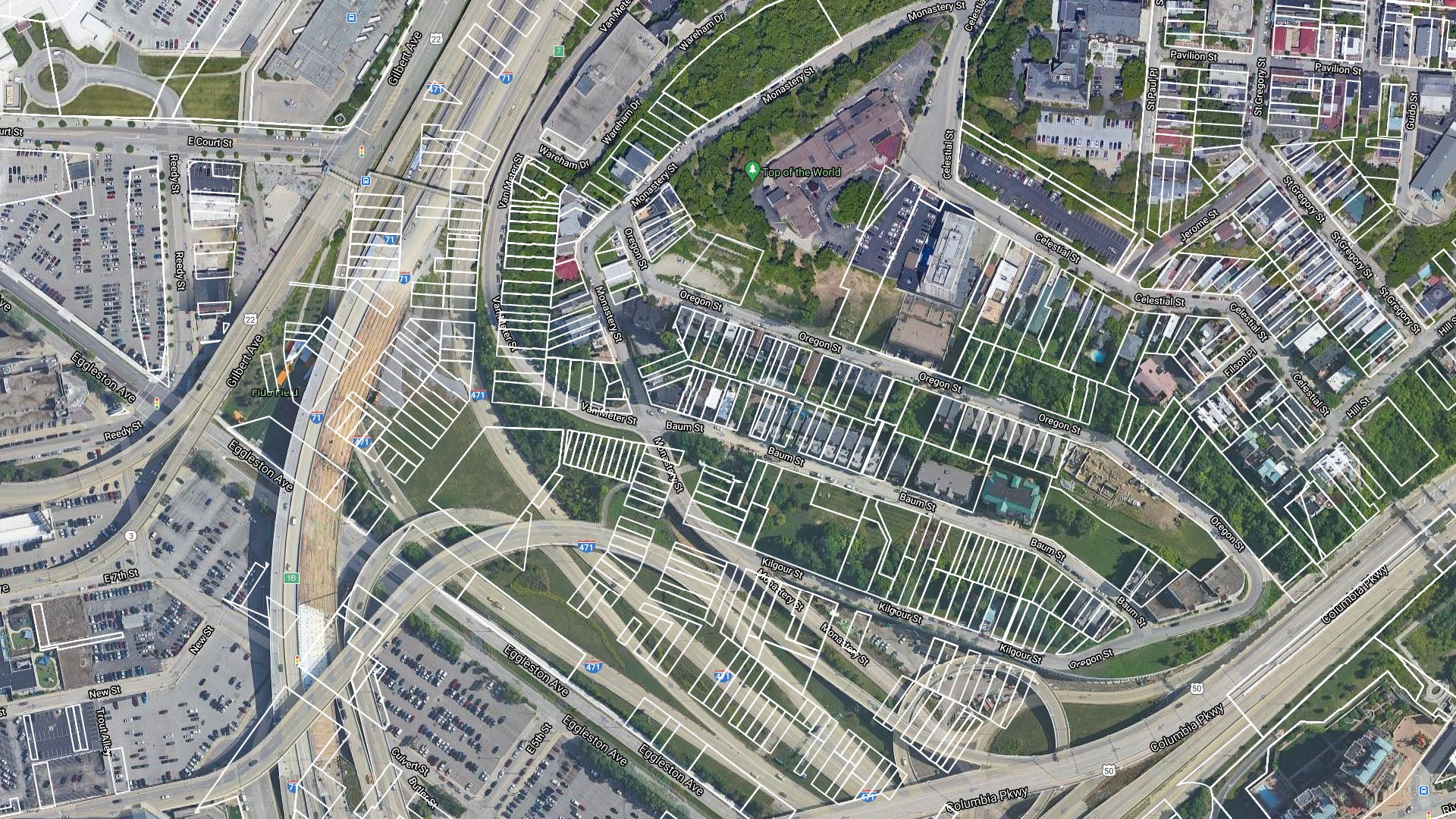 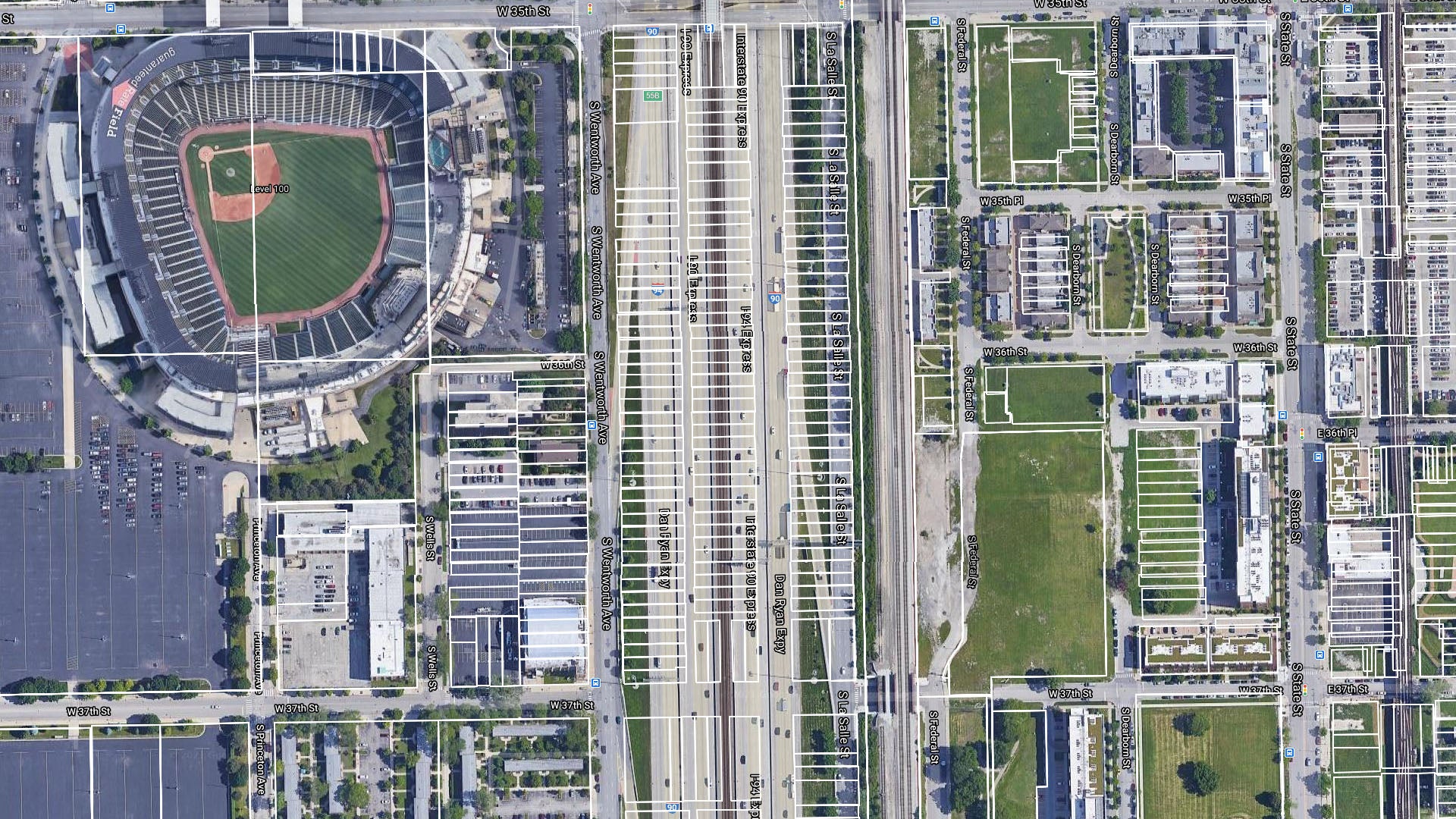 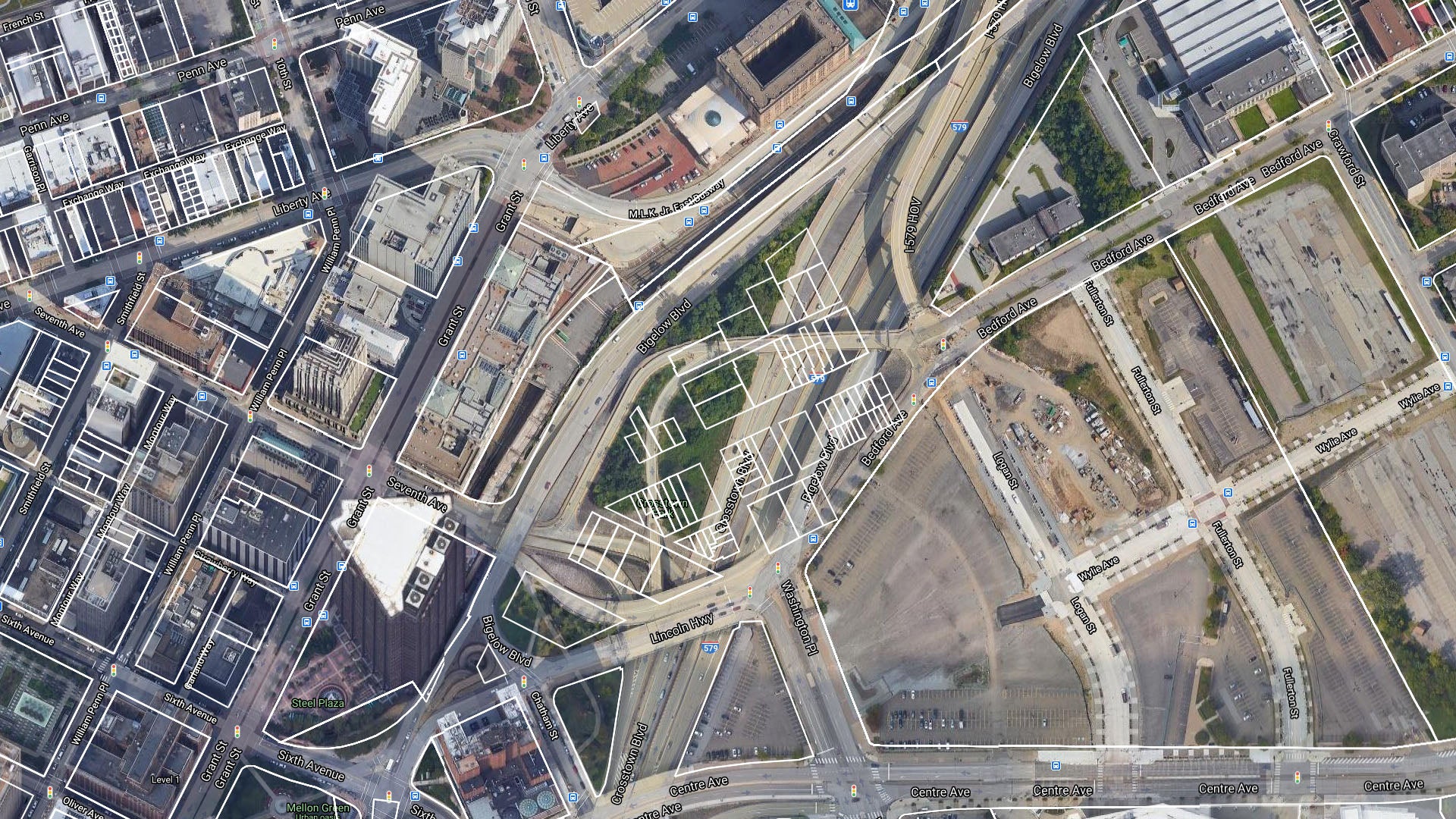 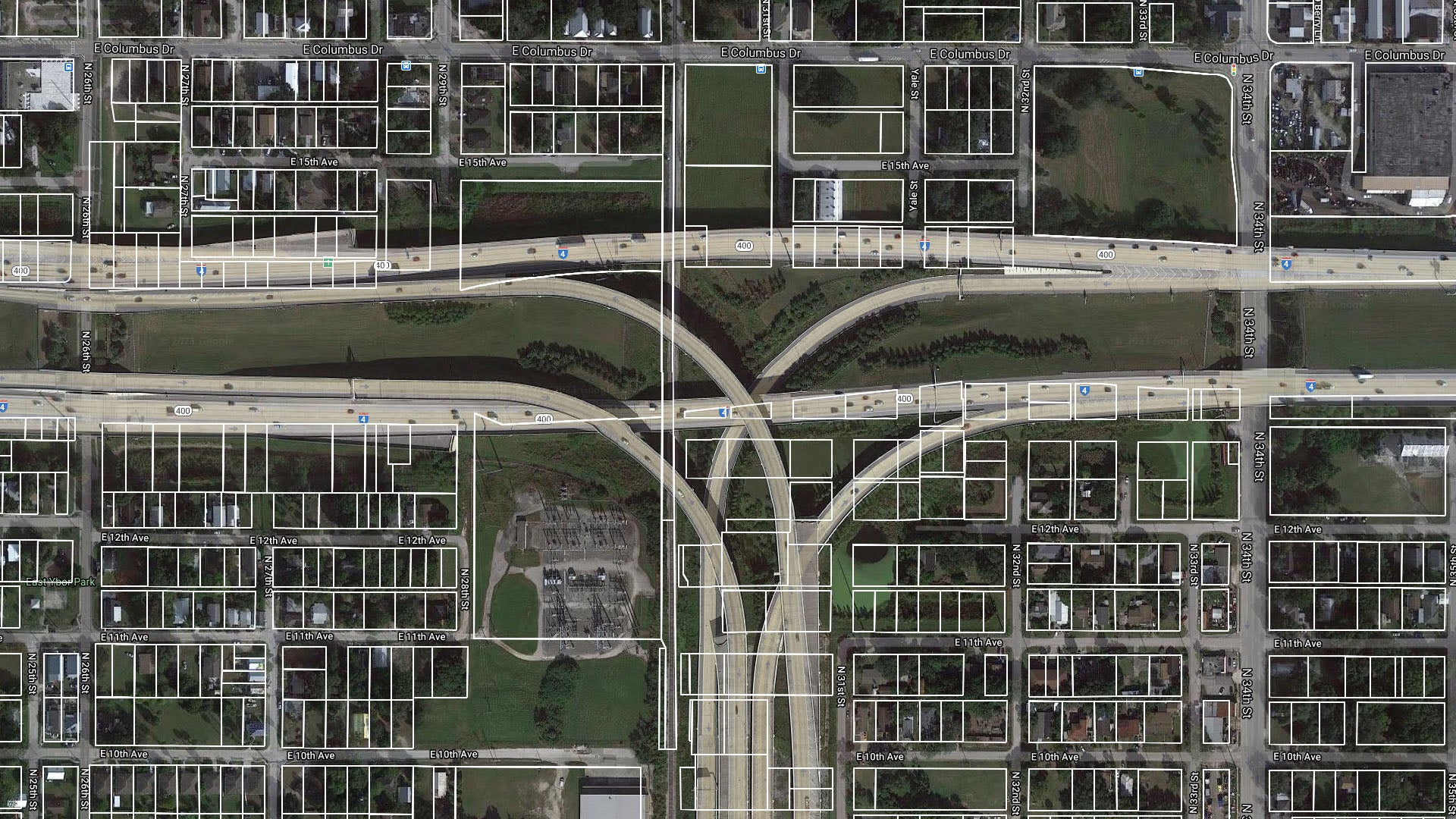 The first image shows Milwaukee and I-794—you can still recognize the outline of whole blocks and a triangular intersection, though the individual property lines haven’t been preserved. Moving onto Cincinnati and Chicago, the destruction is shown in much clearer relief. Thousands of small lots spring up beneath I-71 and I-471 as you take a closer look. Just the same, I-90 and I-94 now sit on the spot where dozens of privately-owned plots used to be.

We reached out to Zillow to learn more about where it’s pulling this data from. According to a spokesperson, Zillow—and other similar websites, as well—receive this data digitally “through a feed” from county records of tax/plat maps. Though the company didn’t have immediate information on the exact databases it’s pulling from, the spokesperson said they would get back to us next week after digging into it some more.

This is a story that played out nationwide over half a century, and really, it’s a shame it’s fallen to a random source like Zillow to provide the most easily-accessible view of the past. Highways were a boon for this country, but the eminent domain that allowed their creation and the quality-of-life issues that they spawned have also had a devastating effect on innumerable urban neighborhoods—again, often working-class neighborhoods populated by minorities. The way our highway network feels like such a permanent, immutable aspect of modern society makes it easy to forget that it wasn’t always like this.

Today, we’re living with the decisions that urban planners made decades ago, living in cities that they had a hand in shaping for better and for worse. But at least yesterday feels a little bit closer now. 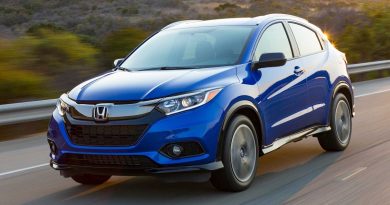 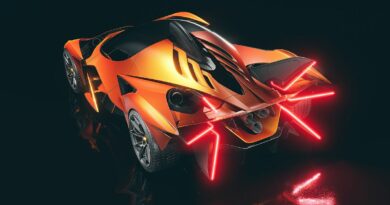