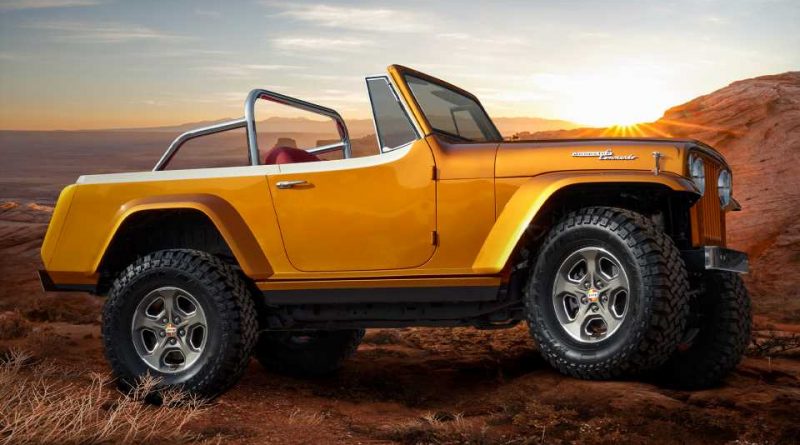 It’s that time of year when off-roaders from all over the country flock to the annual Easter Jeep Safari in rugged Moab, Utah. The event, which kicked off in 1967 for local Jeep owners and fans, is hosted by the Red Rock 4-Wheelers off-road club. This would have been the 55th consecutive year had 2020’s shindig not been canceled for the same reason everything else was called off last year.

At the Easter Jeep Safari, four-wheelers tackle some tough terrain for nine days, bringing their own food, water, safety gear, recovery equipment, and extra fuel for the longer trails. You don’t even have to have a Jeep, as the event welcomes all full-size street-legal 4WD vehicles and street-legal rock buggies (UTVs, sand buggies, crawlers, and ATVs are not allowed). It certainly helps to have some decent off-roading experience, and as you probably guessed, the Jeep brand is the star of the show. 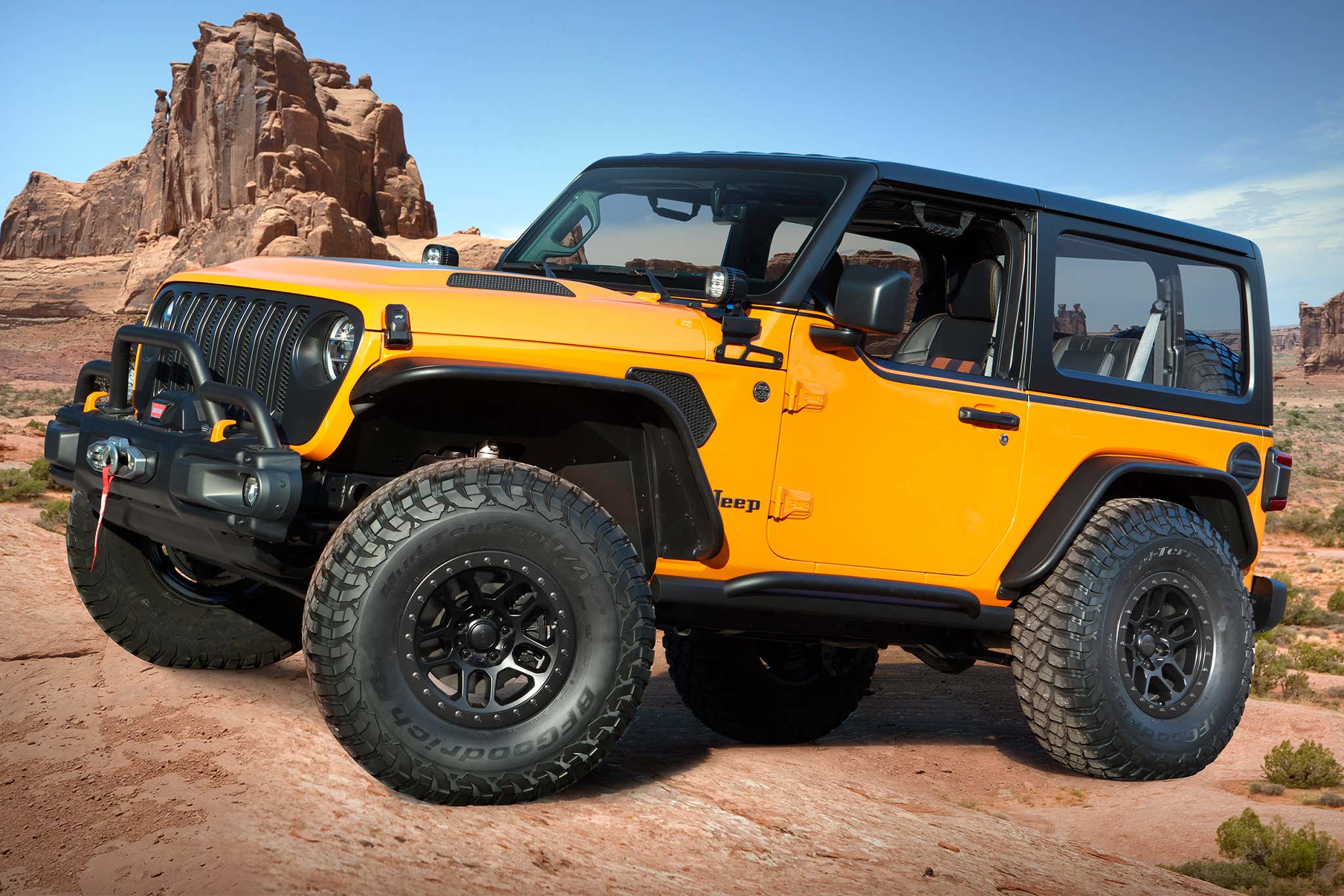 As is tradition, the automaker rolled out four concepts that will debut at the Safari starting Saturday: Magneto, Jeepster Beach, Red Bare, and Orange Peelz. Three Jeep and Mopar concepts that were scheduled to appear in 2020 will get their chance to shine as well, including the Jeep Gladiator Farout for overlanding, big-power Jeep Wrangler Rubicon 392 with a V8 under the hood, and the made-for-mountain-bikers Jeep Gladiator Top Dog.

Here are the details for this year’s freshman concept class: 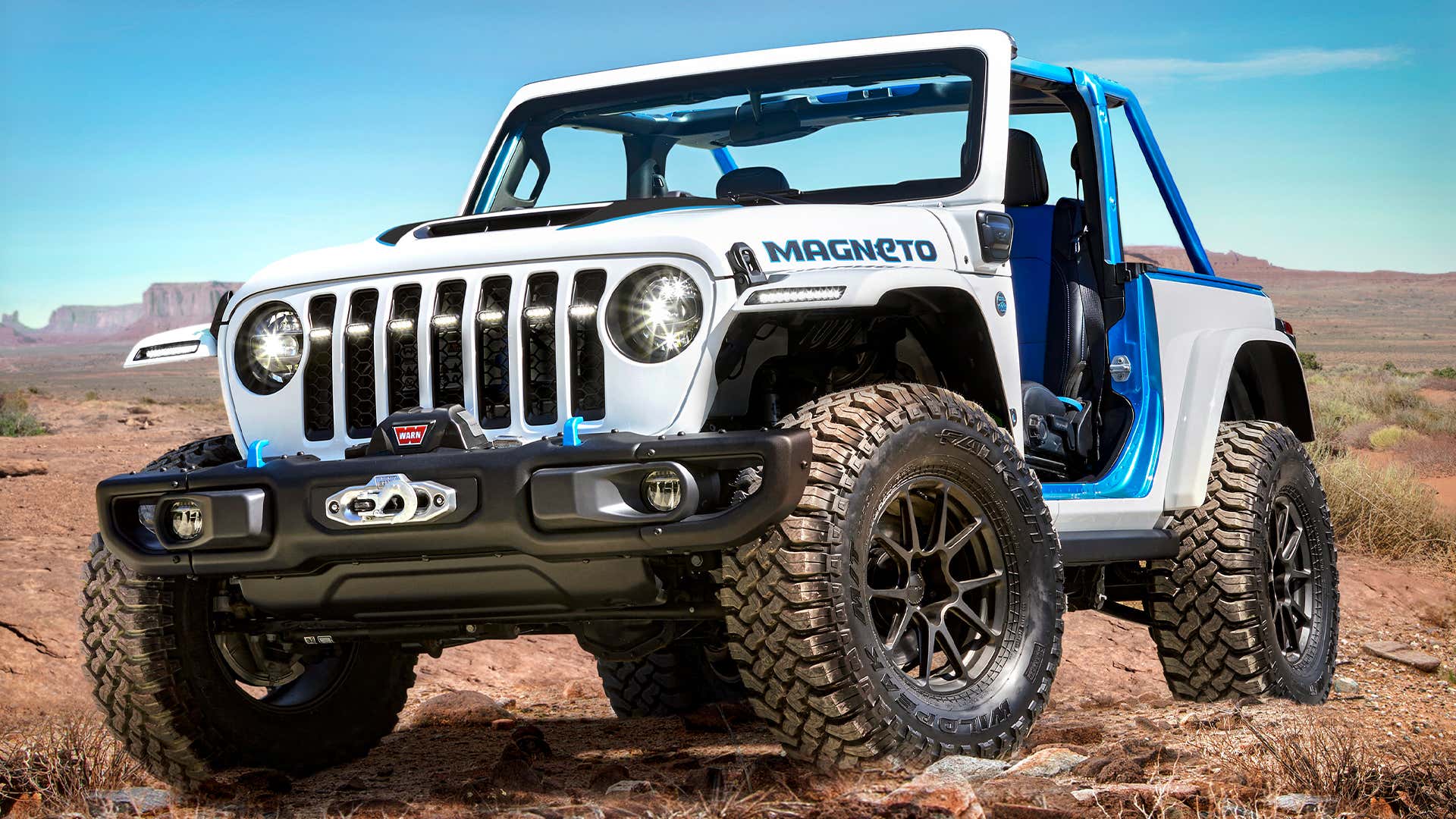 Like the supervillain from X-Men, the Magneto Concept is a multifaceted rig that’ll spark reactions from both sides of the electrification argument. Replacing the typical 3.6-liter gas V6 with a custom-built axial flux electric motor, the Jeep Magneto gets its juice from four battery packs. For balance, the packs were plotted strategically throughout the vehicle—there’s one above the front axle, one filling the space where a fuel tank would be, another replacing the exhaust muffler, and a final unit out back, underneath the trunk floor. Waterproof enclosures sheath the components to keep them from shorting out in water crossings as the Magneto is rated for 30 inches of fording depth.

Dressed in blue and white–specific colors that shout “electrification,” Jeep’s Magneto also comes with 17-inch blacked-out metallic wheels with 35-inch tires made for mud, a custom roll cage, steel bumpers, a Warn winch, and a steel belly pan so you can crawl across the rocks without ripping out the intestines of your Jeep.

Oh, it just so happens to have a six-speed manual transmission, too. 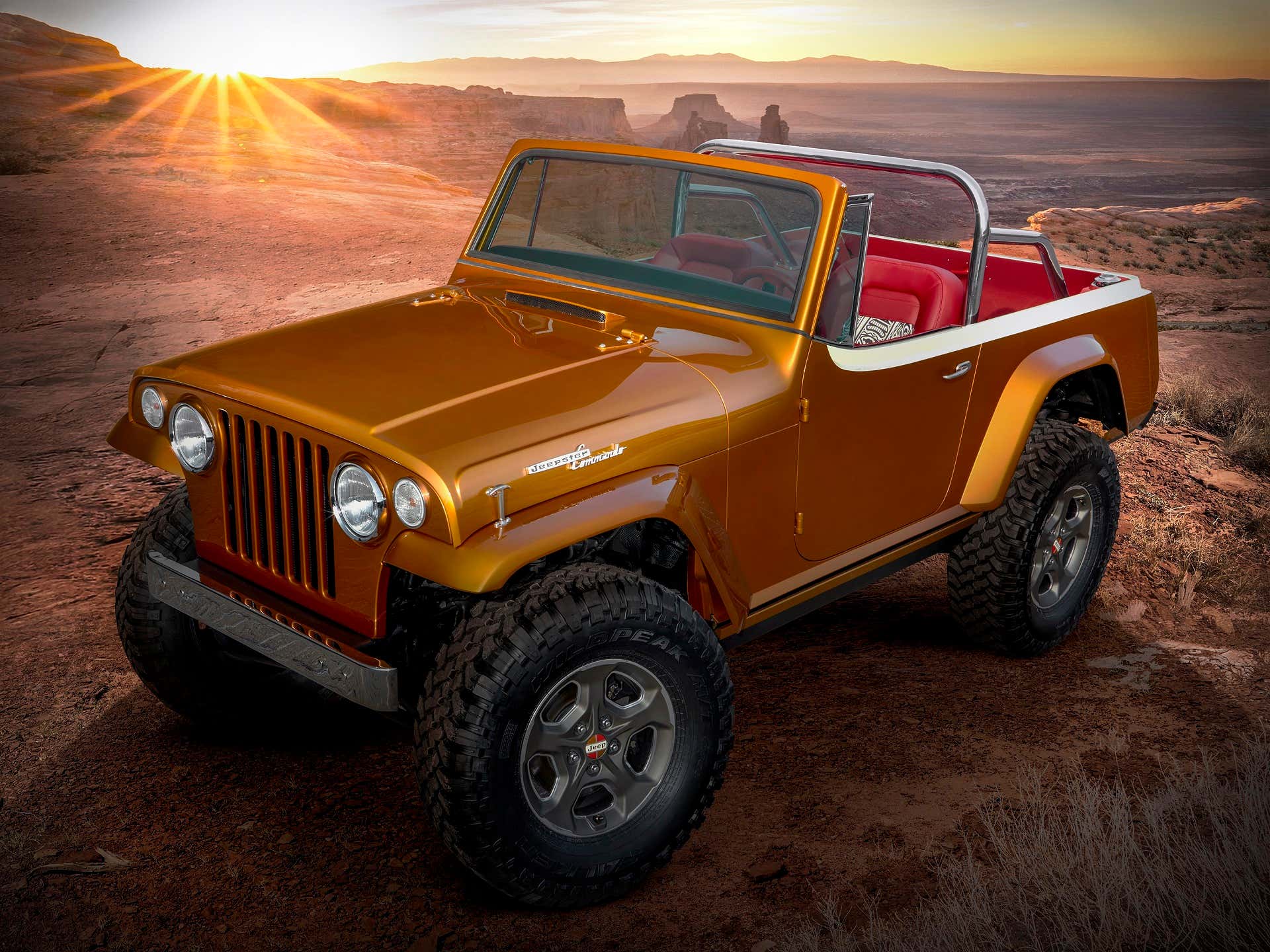 A mashup of a retro 1968 Jeepster Commando and 2020 Wrangler Rubicon, Jeepster Beach is what Matthew McConaughey would drive if he were still playing bongos in his yard; now he lives a mile down the road from me with his wife and three kids and drives Lincolns. This restomod packs Jeep’s 2.0-liter turbocharged four-cylinder under the hood, but don’t be put off by the lack of a bigger power plant. Thanks to a pretty stout tune, the four-banger makes 25 percent more power than it normally does in the Wrangler. In all, that’s 340 horsepower and 369 pound-feet of torque.

Jeep specially engineered a cooling system so the Jeepster Beach can hang with the others in Moab. This pumped-up 2.0-liter is paired to an eight-speed automatic transmission with a 4:1 transfer case, which sends twist to 35-inch tires. 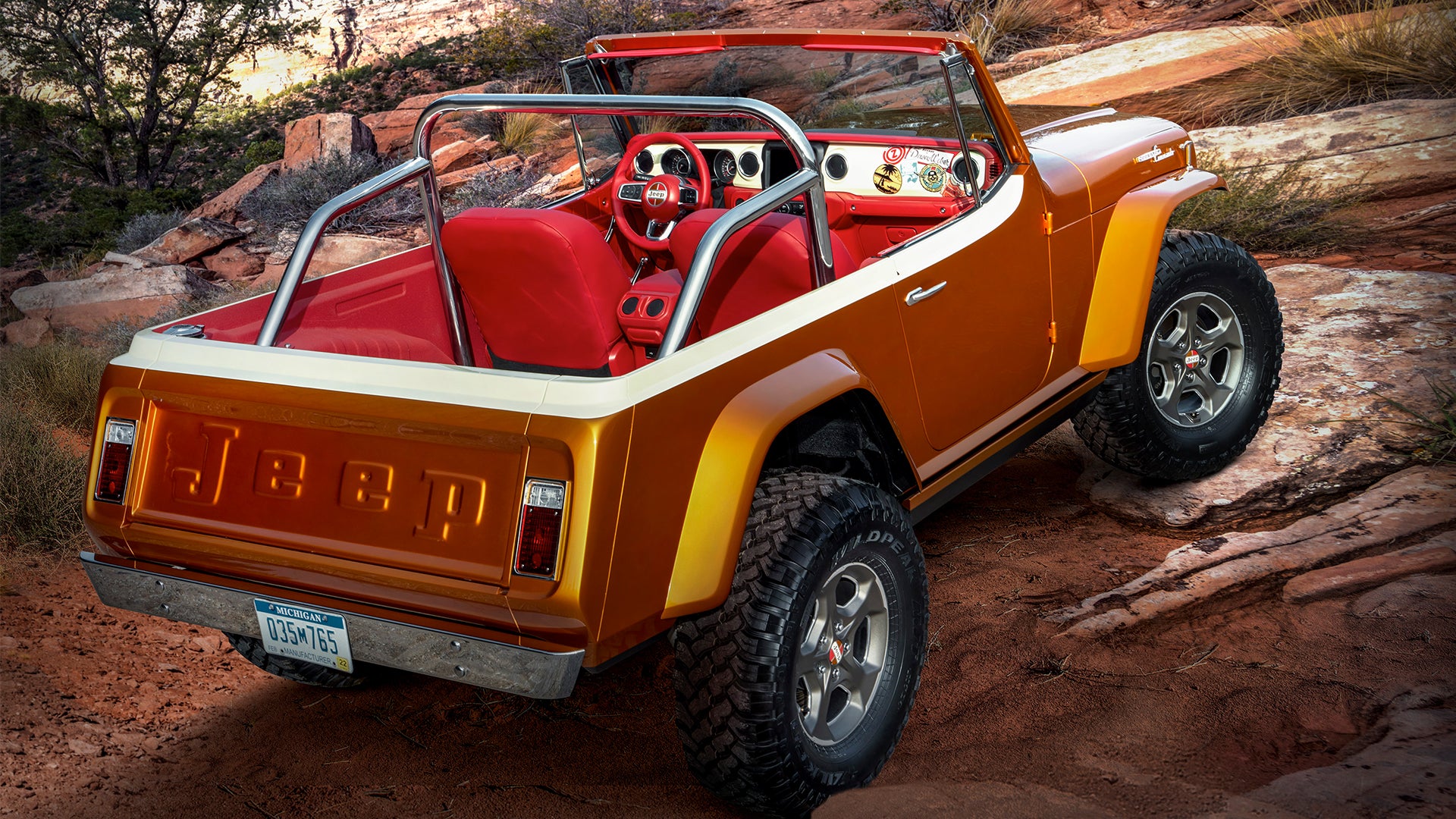 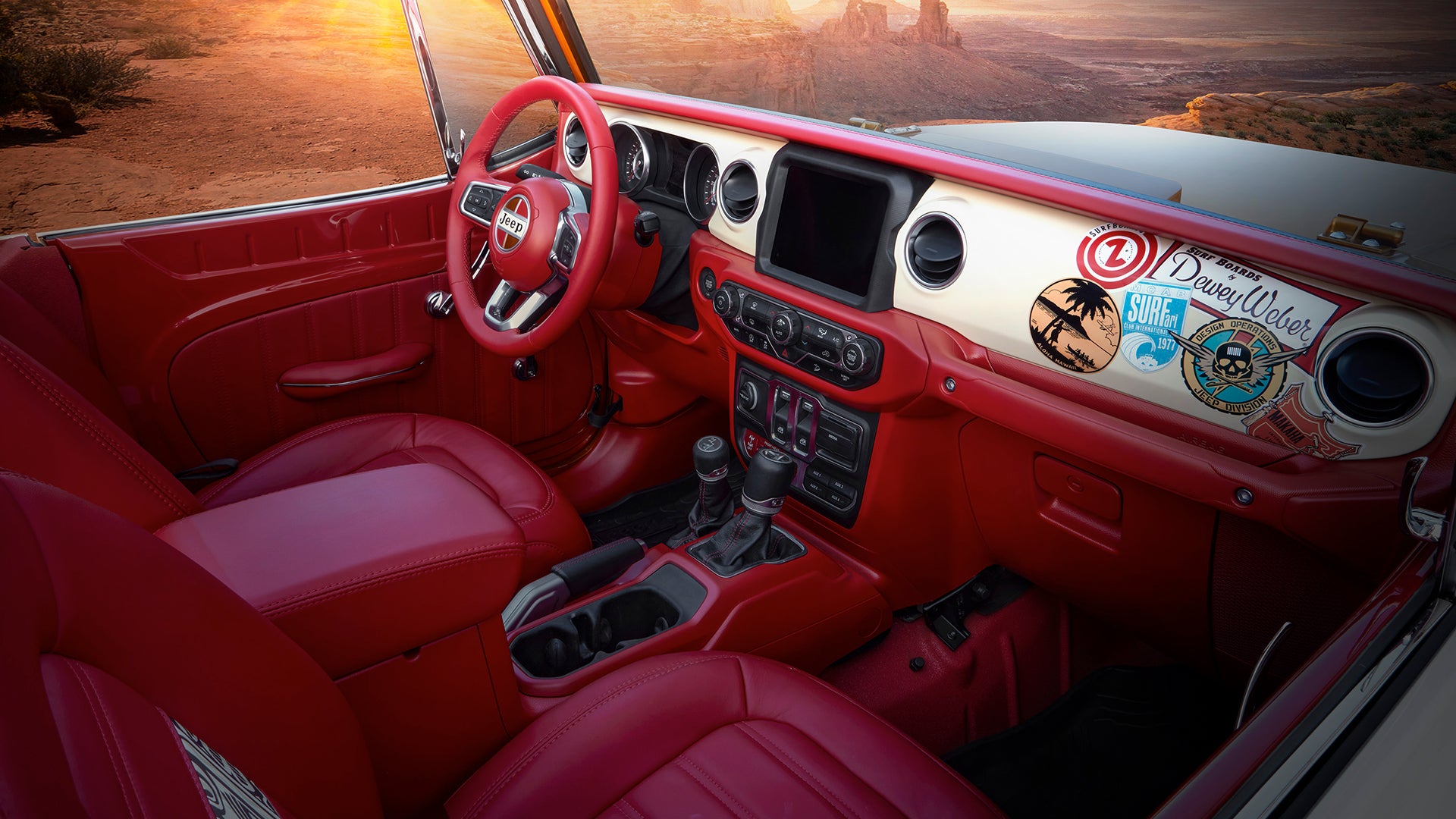 Jeep yanked the carpets from this model for easy cleaning, and it’s painted in apropos colors Hazy IPA and Zinc Oxide; a chrome four-point safety cage and chrome details add some bling. 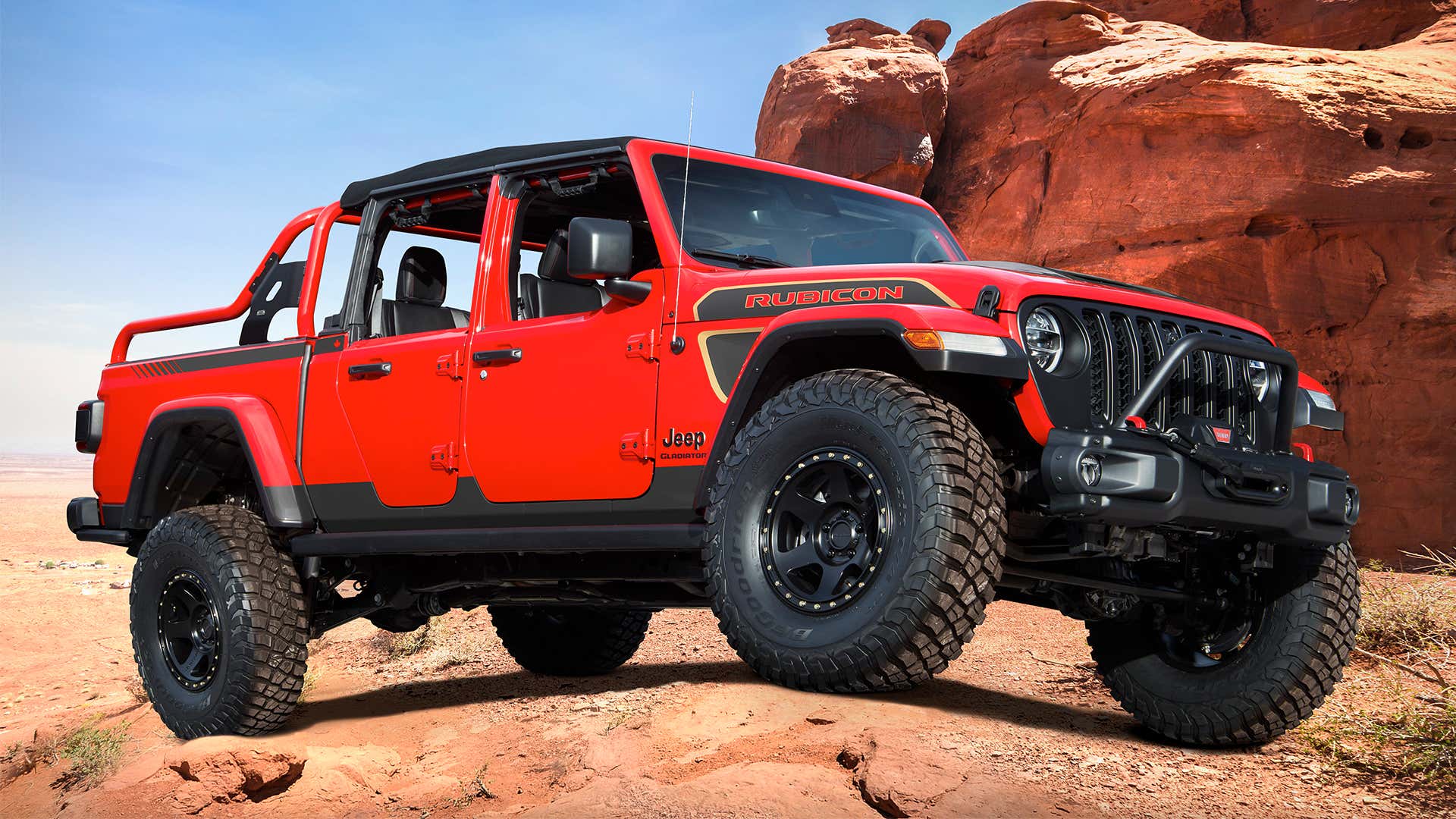 The Jeep Gladiator Red Bare is super rugged from a mechanical standpoint with upgraded Dana 44 axles that have been regeared to 4.88 front and rear. It also has a 91:1 crawl ratio; for reference, the normal Gladiator Rubicon with an automatic transmission boasts a 77.2:1 crawl ratio. Under the matte black Mojave hood, you’ll find a 260-horsepower, turbocharged, 3.0-liter EcoDiesel engine that makes 442 pound-feet of torque.

All that comes in handy when turning the Red Bare’s 37-inch tires, which sit just inside the fender flares that are now two inches higher thanks to a Jeep Performance Parts lift. 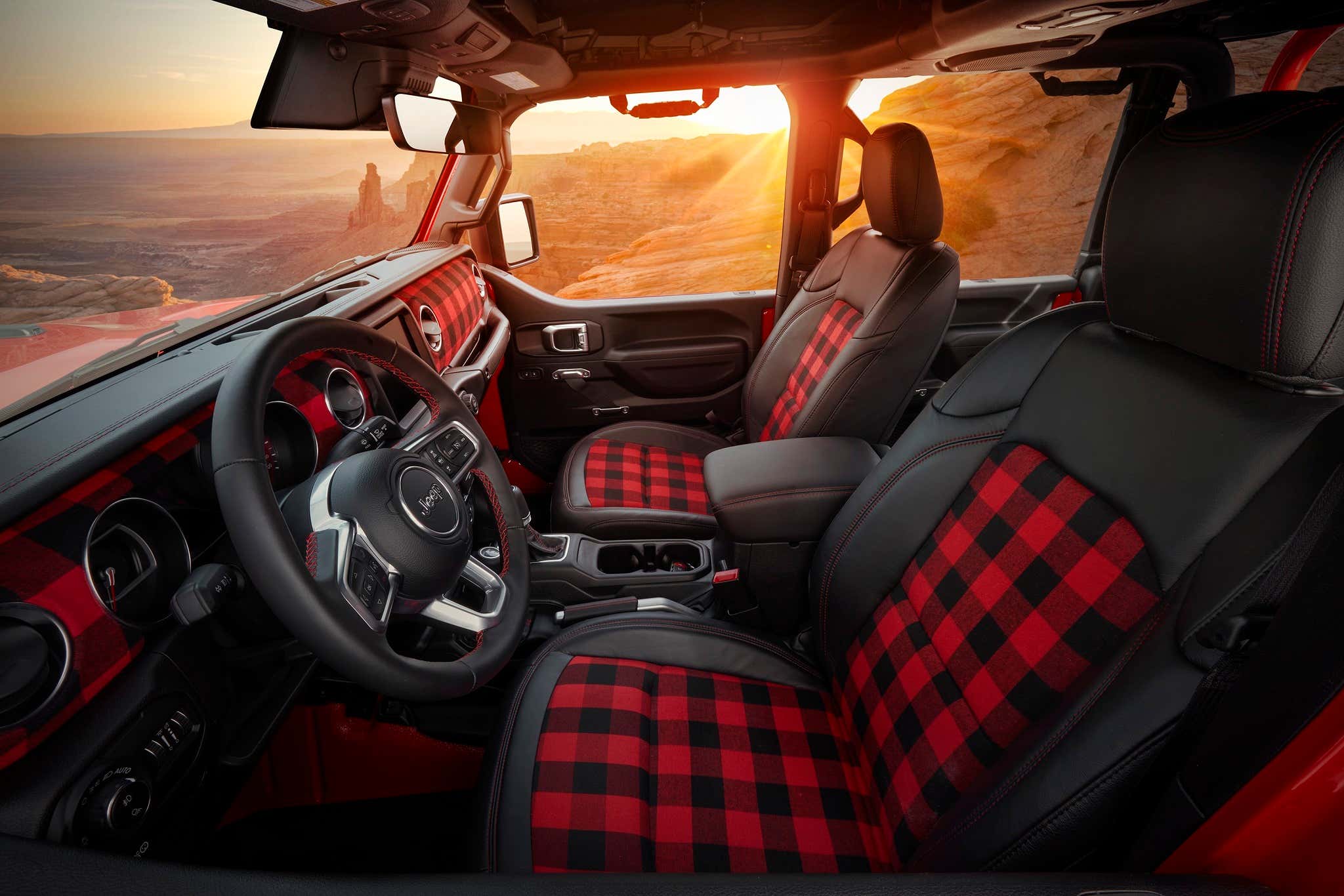 While the Fire Cracker Red exterior is a good look, what I like best about this concept is its interior. It’s wrapped in red and black flannel fabric on Katzkin leather seats, so I’m thinking this one is probably the cushiest ride for Moab. Don’t mistake that comfort for a lack of ability, though. 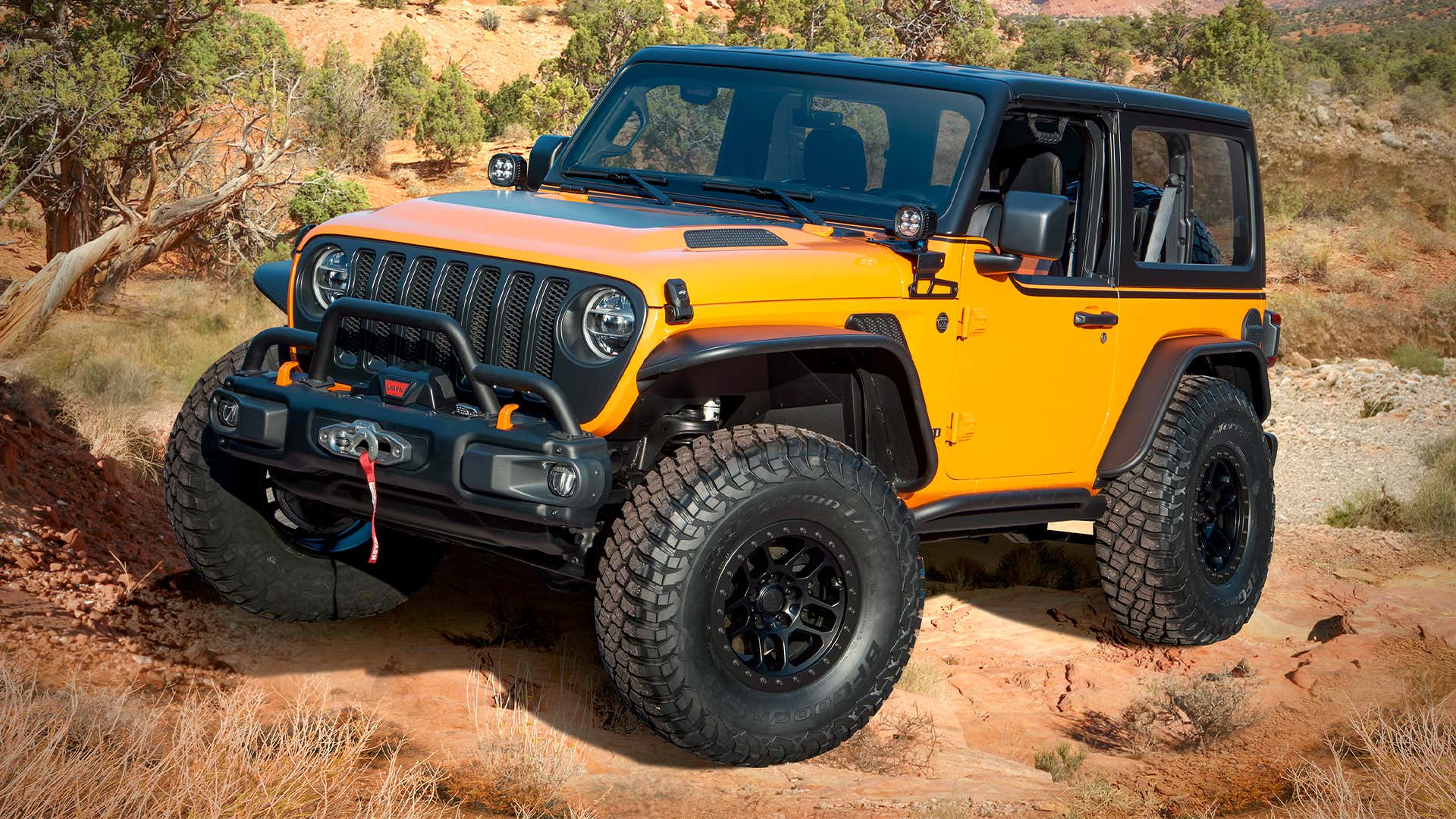 I’m willing to forgive the Orange Peelz for its name, even though any word that ends with an artificial Z drives me crazy. It’s packed with more Jeep Performance Parts than any of the other concepts, from a two-inch lift kit with FOX shocks, prototype high-top steel fender flares, prototype half-doors (that are eventually coming to production), and a swing gate hinge reinforcement that allows for a larger spare tire. In the Orange Peelz’ case, that means a 37-inch BF Goodrich KM3.

This goes nicely with the Satin Black trim on an arresting yellow-orange body. It’s tougher than it looks with its sunny color, though; the Jeep Orange Peelz comes with a Corning Gorilla Glass windshield, custom rock rails, and an 8,000-pound Rubicon Warn winch. With the 3.6-liter Pentastar V6 breathing through a JPP cat-back exhaust system, you definitely won’t be able to sneak up on anyone, either. 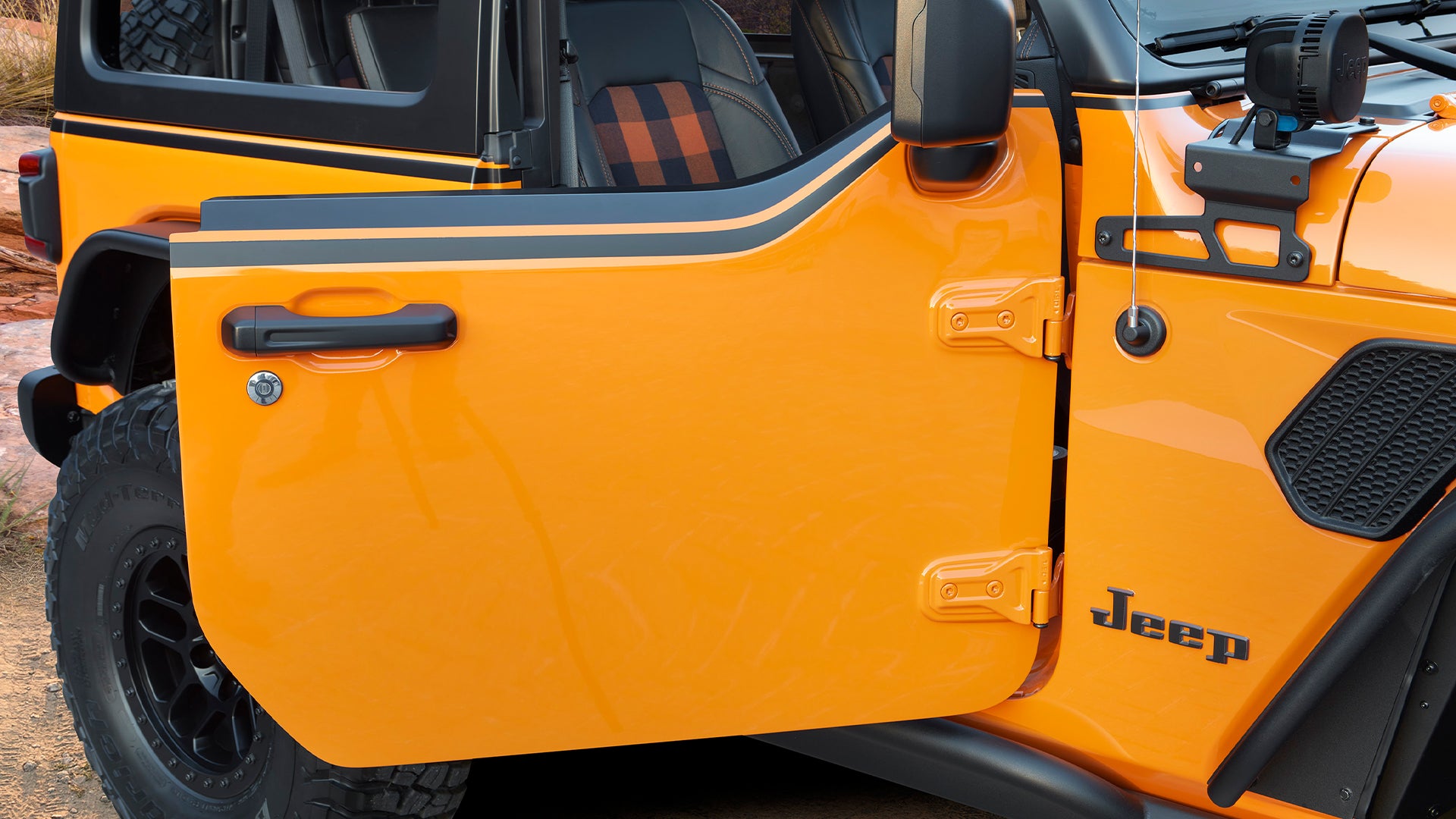 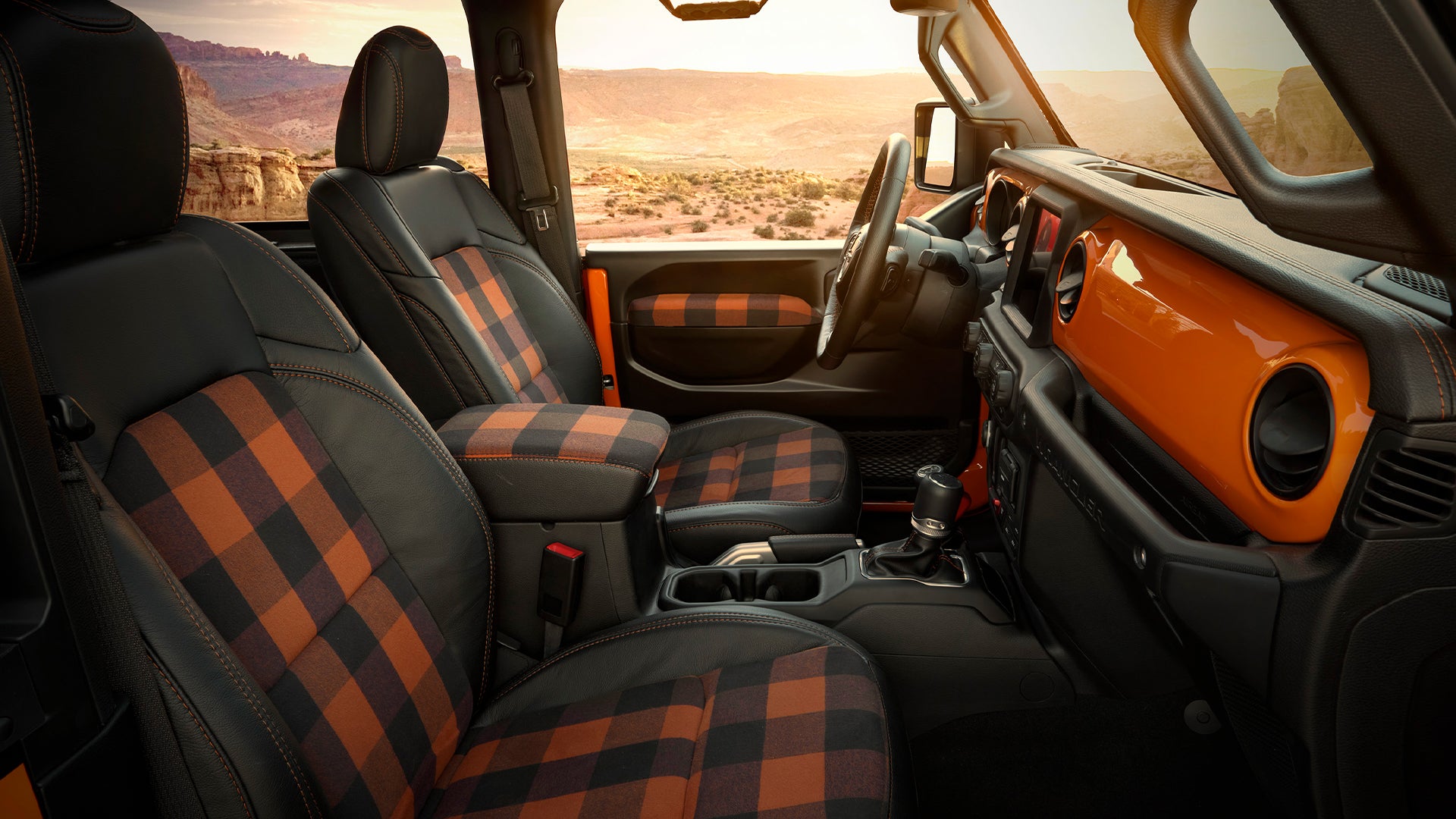 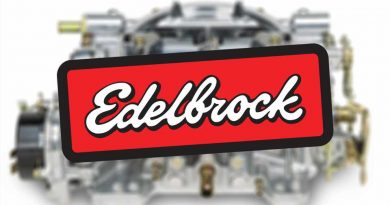 Edelbrock Is Leaving California Partly Because SpaceX Hires Too Many Machinists 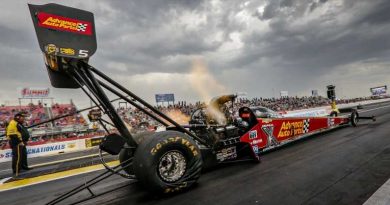 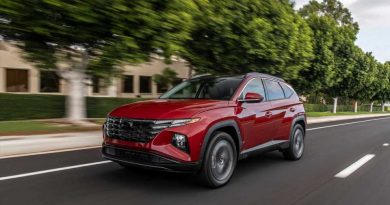 2022 Hyundai Tucson Pricing Reveals Something For Everyone 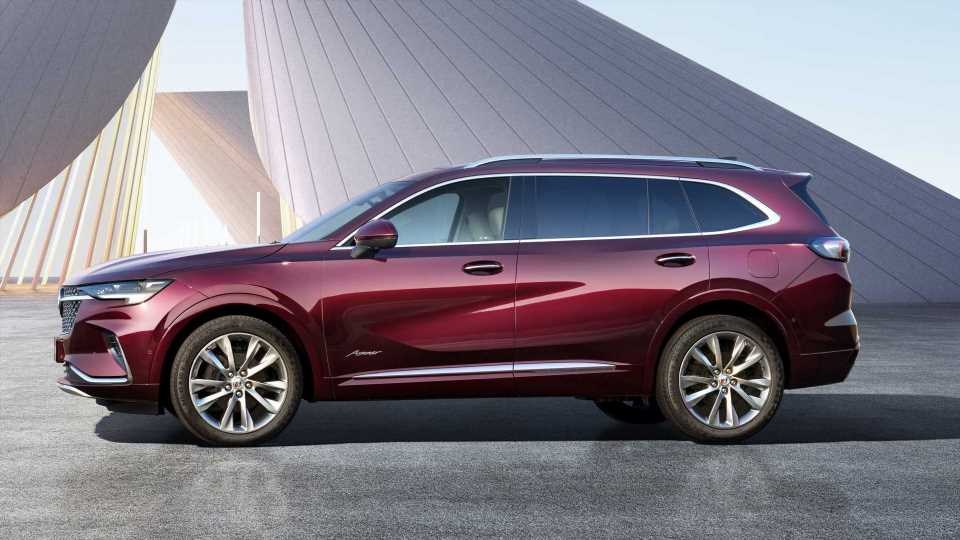