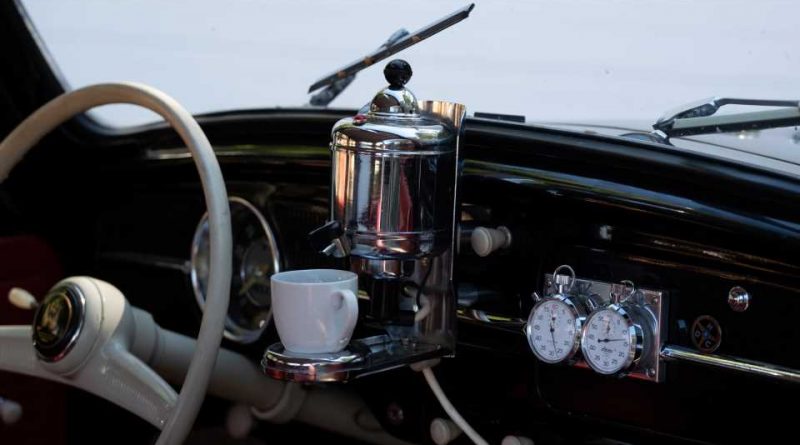 Rare options on vintage cars can add a lot of value, but many of them can be, well, decidedly uninteresting. Things like different color combinations, maybe some unique trim piece—they’re the sort of things that people who carry around paint thickness gauges geek out over all day. But not all rare options are like this. For instance, Honda’s analog navigation system from the 1980s was a rare, extremely sophisticated option that pretty much no one bought. Much of the same can be said for Oldsmobile’s “Visual Information Center,” a touchscreen CRT infotainment system a few decades before that tech was fully baked. And while a dash-mounted coffee maker for the Volkswagen Beetle may not be as expensive or sophisticated as those systems, it’s even rarer today.

So rare, in fact, that scant information survives about the Hertella Auto Kaffeemachine. There’s at least one brochure online in German—in fact, that’s one of the few images of the pot that floats around the web—and not much else. The only way to get more information would be to track down somebody who actually had one. So we did.

I reached out to Dave Hord of Classic Car Adventures via a Reddit post, and in return, I learned about a device that makes Starbucks runs look lazy by comparison. 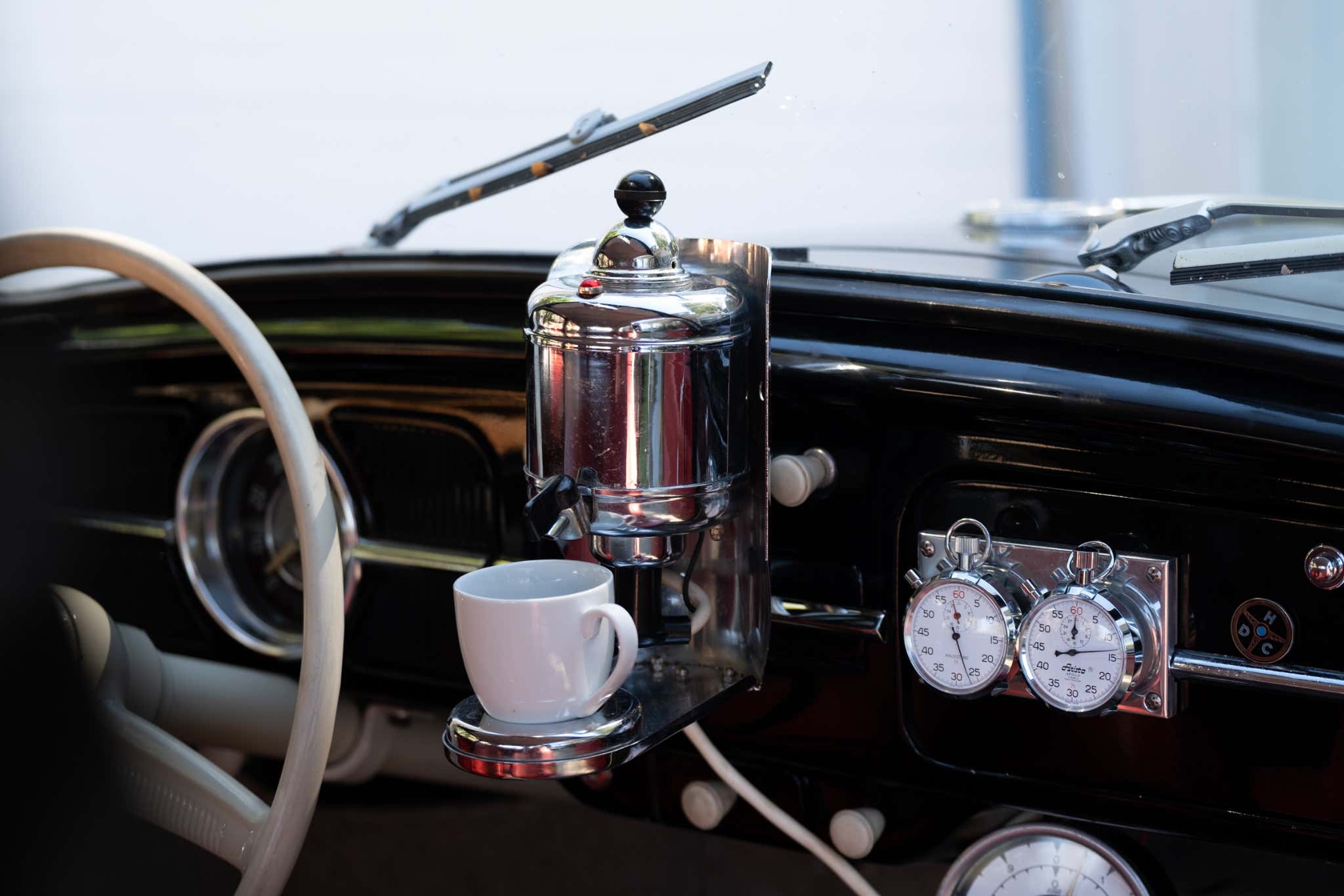 “At the beginning of my quest, I contacted a gent in Serbia who had recently bought one, to see if I could convince him to sell me his,” Hord told me. “I failed two years ago, but when he posted a second unit for sale this year I was one of the first to respond. We couldn’t agree on a price, and it sold to another individual… but when I messaged him a month later, the seller agreed to sell me his personal unit.”

With the sale handled, the unit was shipped to the U.S. all the way from Serbia. When it arrived, however, the confusion continued. As I mentioned, Scant information is available about these units, and the machine itself didn’t answer many questions.

“According to the advertisement, they were sold in both 6v or 12v versions. My unit has no markings on it what-so-ever to determine the correct voltage. We’ve tested it with a 6V battery, and the indicator lamp lights up. Unfortunately, after 5min we couldn’t feel any heat. I haven’t had time to test it for resistance, to confirm the heater element should work. So we haven’t yet tested it on 12v.” 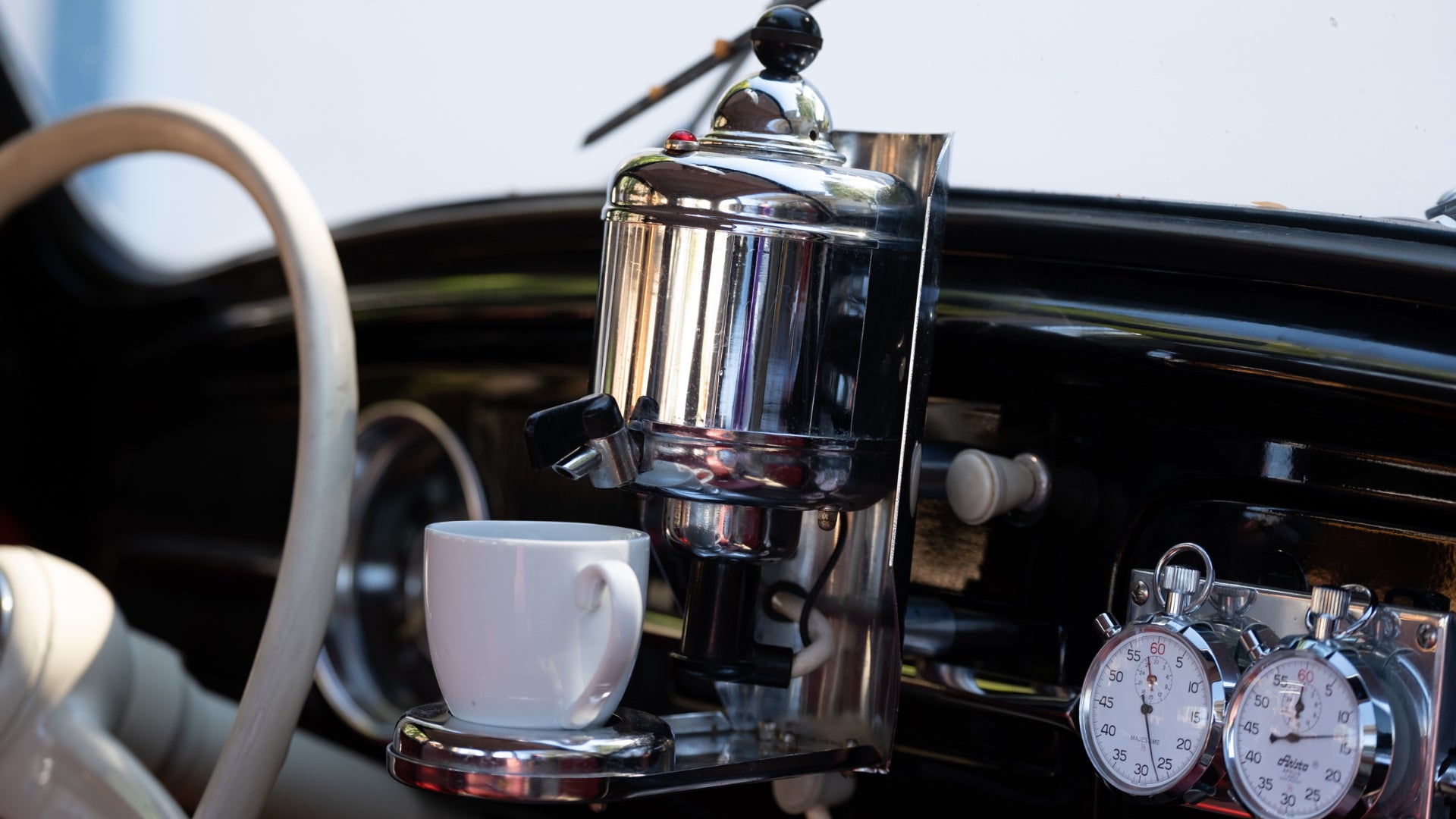 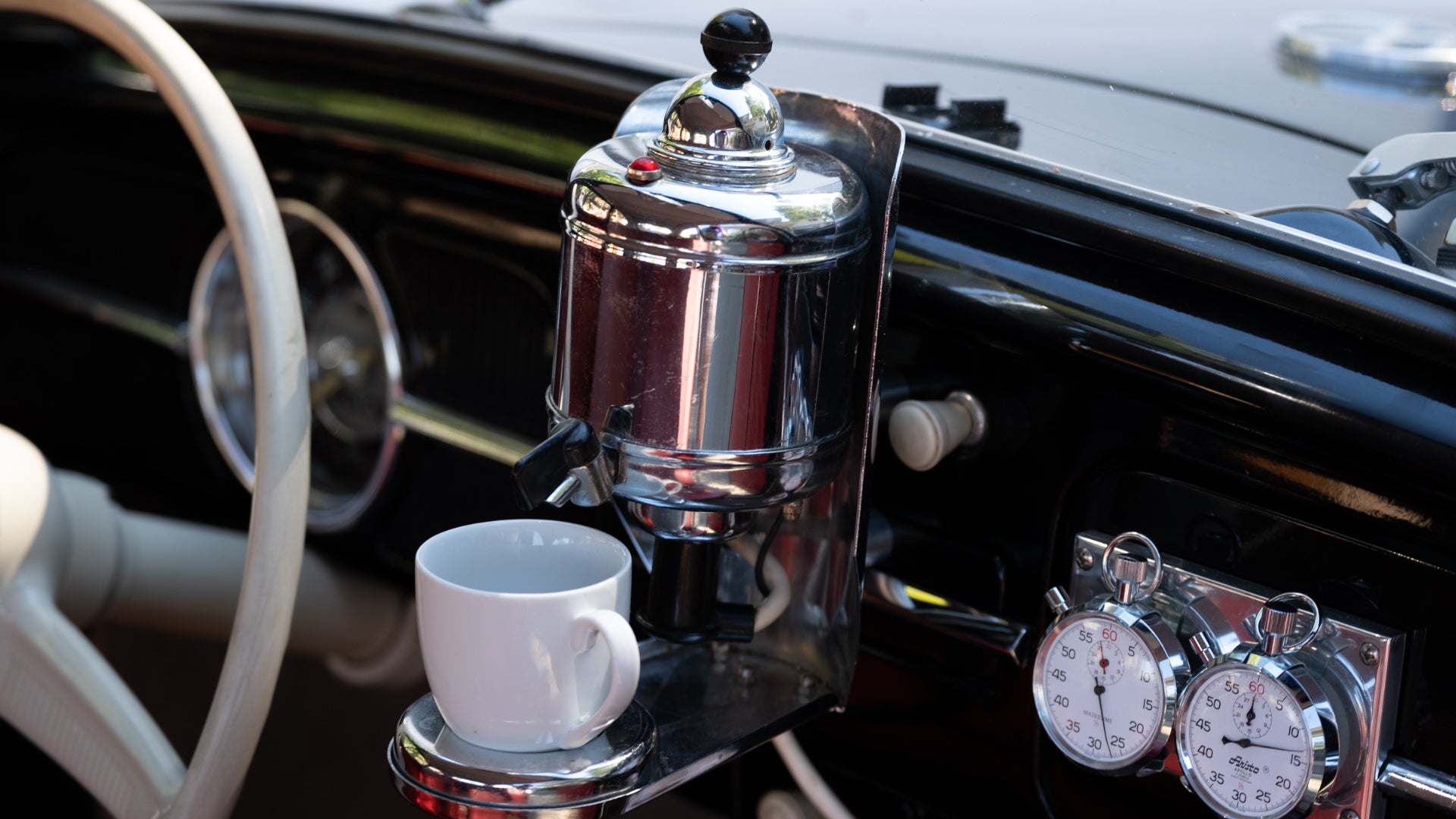 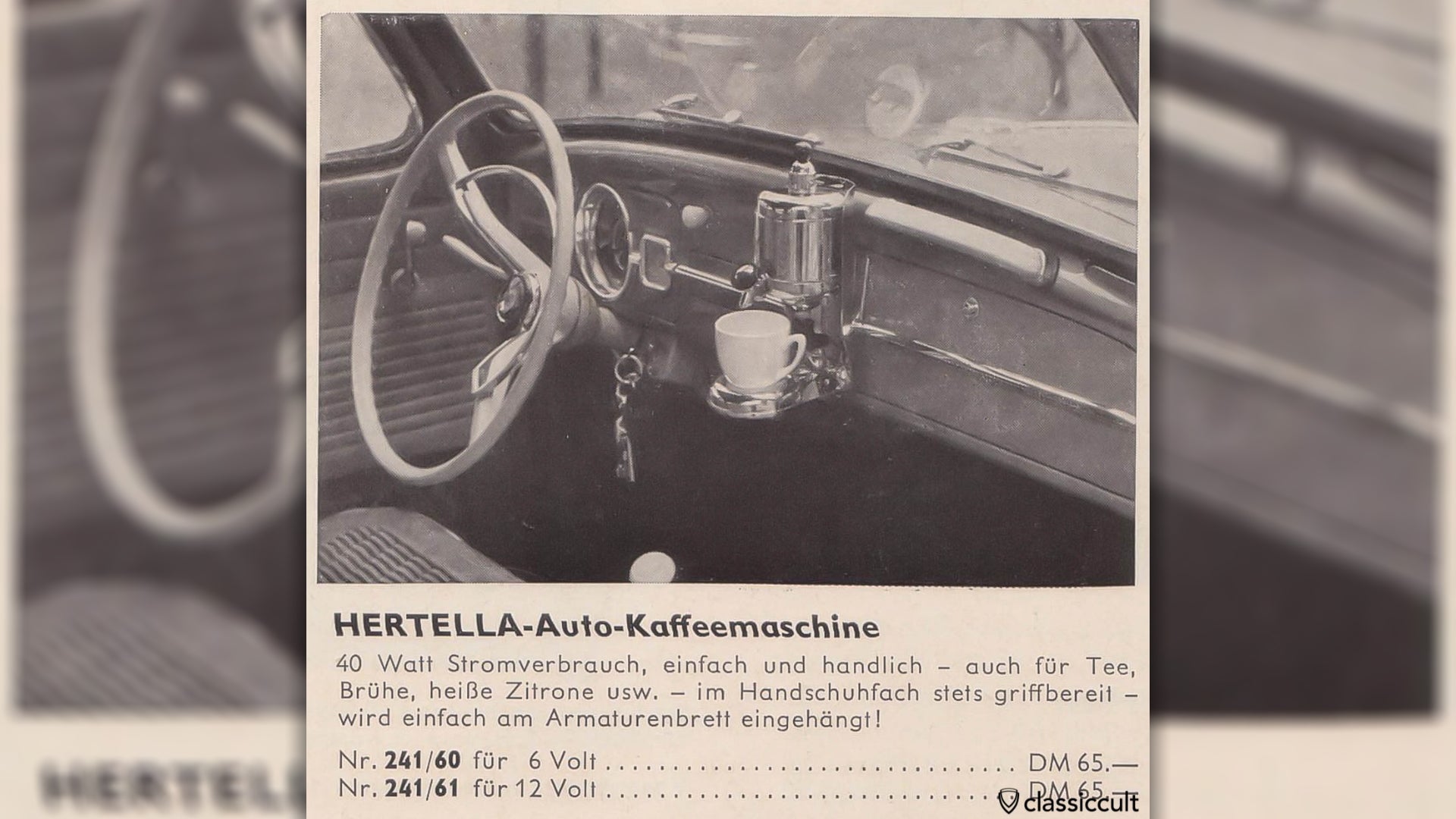 There’s also no power switch on the machine. As soon as you plug it into the cigarette lighter, it just gets hot. And as far as the type of coffee machine that it is, well, you would have to be pretty desperate for caffeine to make coffee in this thing.

“I always thought they were a percolator, or espresso machine like a Moka… but nope,” he said. “I have no instructions, so can only tell you what I’ve determined on my own. You fill the vessel with water, put your coffee in the (double layer) screen, and heat up the unit. I presume you heat the unit up with the coffee in it, which means this basically brews coffee as though it’s tea.”

“I have to imagine this machine actually makes terrible coffee.” 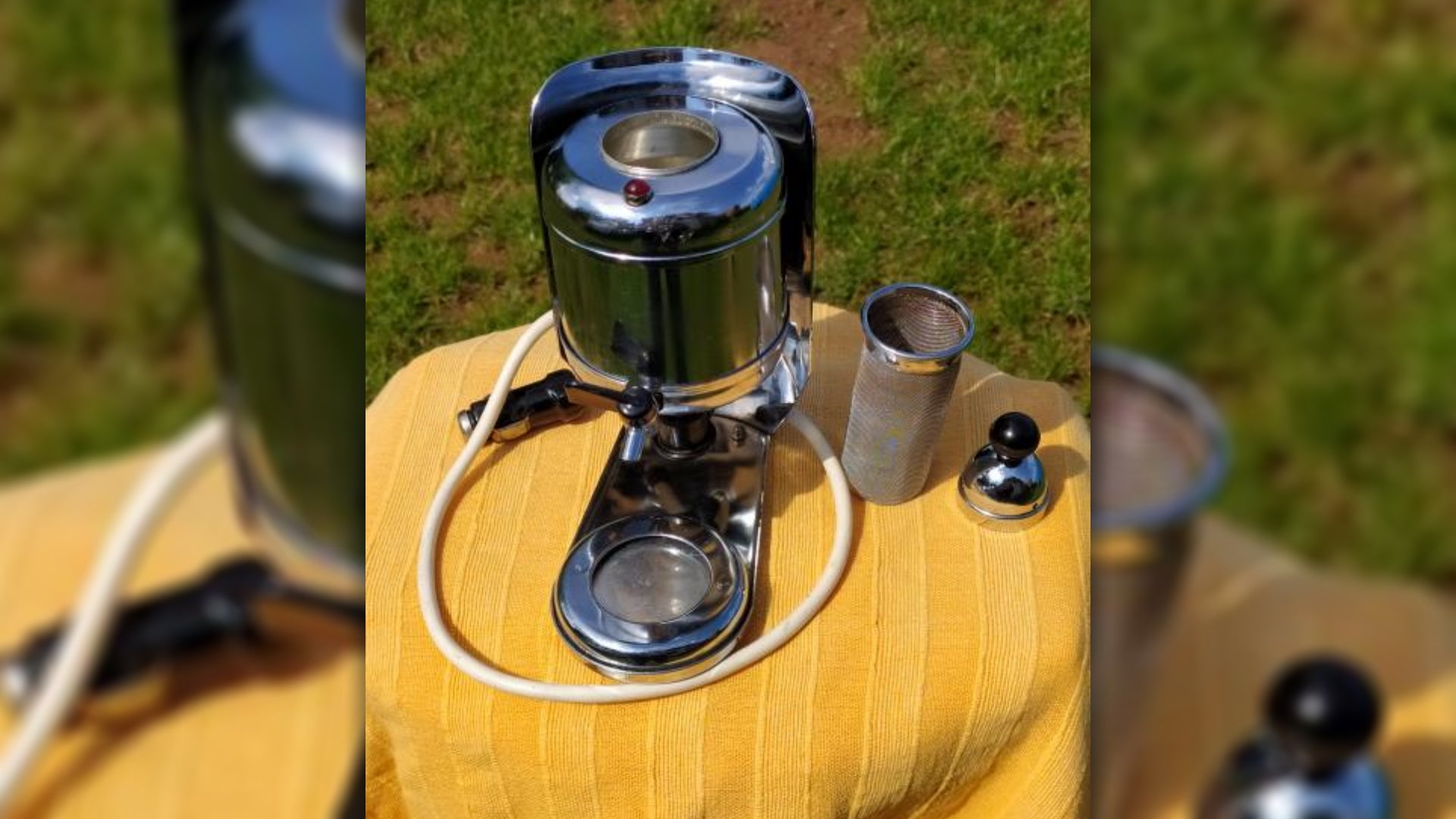 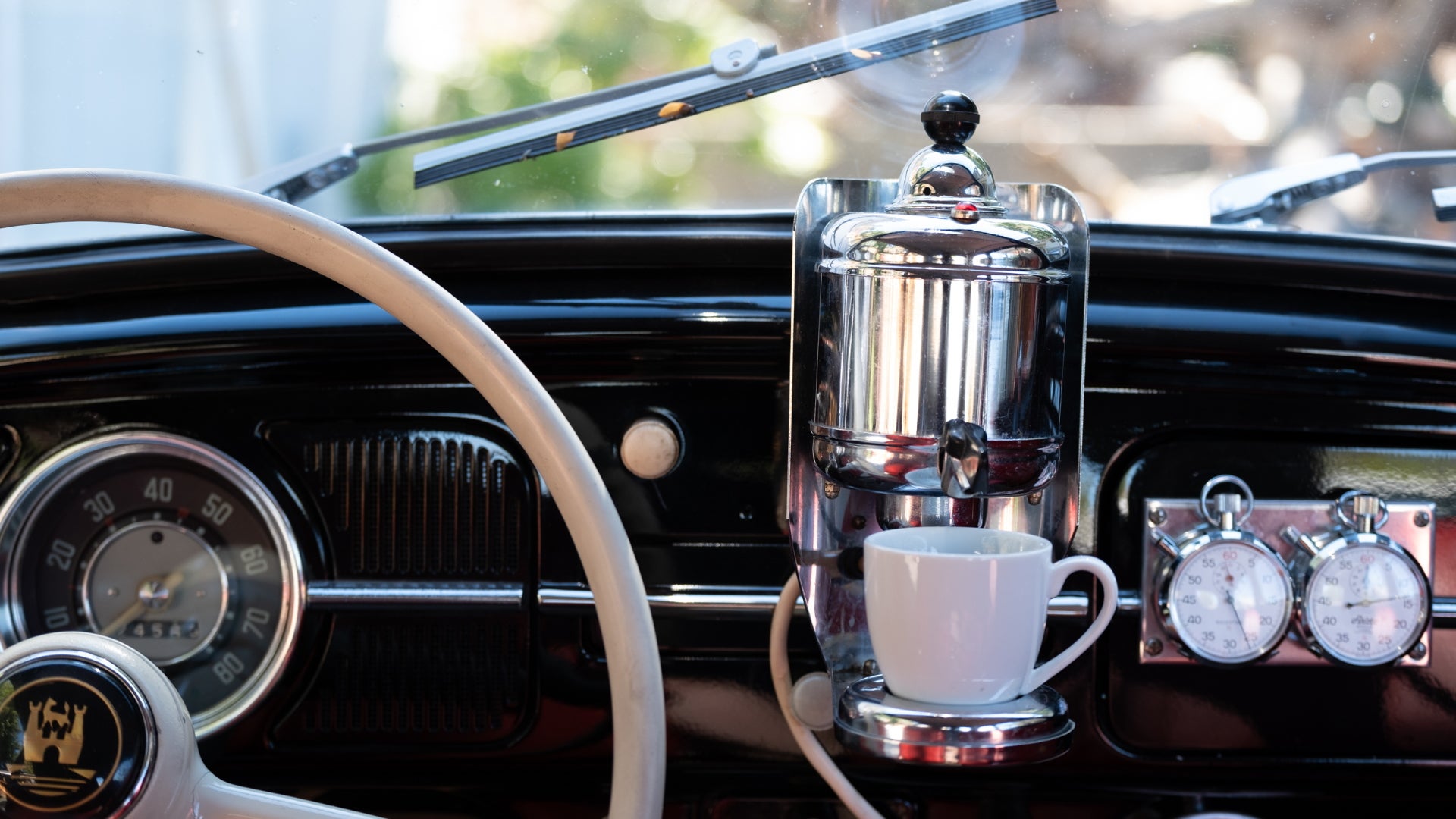 But while the coffee quality may not be great, the machine does have a few clever features. The porcelain cups that came with it apparently had a metal disc on the bottom of them that allowed them to stick to the machine magnetically. It also mounts to the dash with a simple bracket, allowing for the pot to quickly be removed and cleaned when necessary.

The rarity of these things is really the cool factor here, though. Hord tells me he’s only ever seen six of these machines for sale in the three years he’s searched for them. And as far as we know, that’s how many exist today. You can see why they may have been discarded, however. It was a car accessory, it made bad coffee—it was probably something that just got thrown out.

It was not cheap, however. Doing some quick conversions from German Marks to U.S. Dollars—and accounting for inflation—this machine would cost about $136 today. That’s costly, but they are, of course, even more expensive nowadays. Prices get as high as $900, with few examples getting much cheaper.

But costly as it may be, the Hertella Kaffeemachine is certainly an eyecatching accessory to install in a Bug. You may not be too popular at your local Cars and Coffee for the uhh, let’s call it, bean water you provide, but at least people will be able to appreciate the rare machine you have hanging off the dash.

Big thanks to Dave Hord for the great pictures!

You're Not Crazy, Here's Why Kia's New Logo Looks Crooked 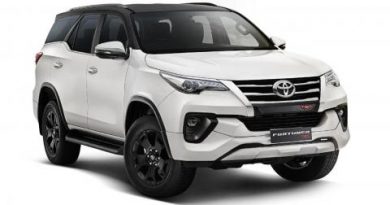