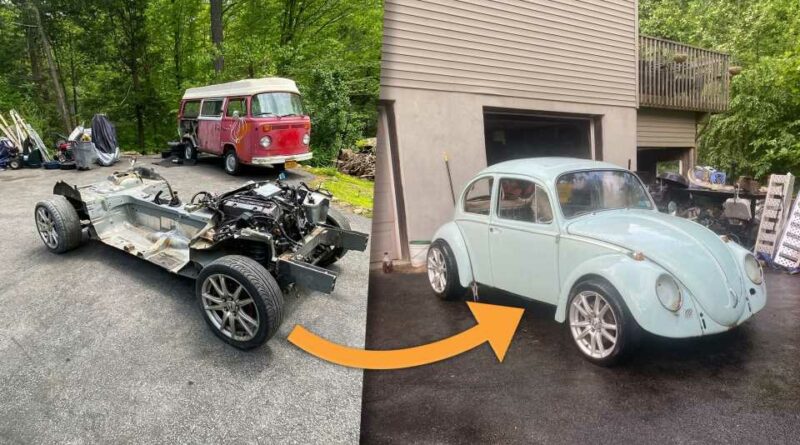 We’ve seen before what happens when two very different vehicles get mashed up together. How about a Lexus LS400 mixed with an old Ford F100. Or more bizarrely, a fan boat tied up with a Pontiac Fiero? Typically they’re fun projects involving some interesting cars, and this latest viral build put together by car enthusiast Garrett Dawson is no exception. As it turns out, a Honda S2000 and a vintage Volkswagen Beetle share nearly identical wheelbases.

To be clear, Dawson didn’t just buy a drivable S2000 with the intention of combining it with a Beetle. The Volkswagen was a project that was originally supposed to be something of a straightforward restoration. However, when the opportunity to buy a totaled but still salvageable S2000 for a paltry $1,000 came up, the pieces began to come together. 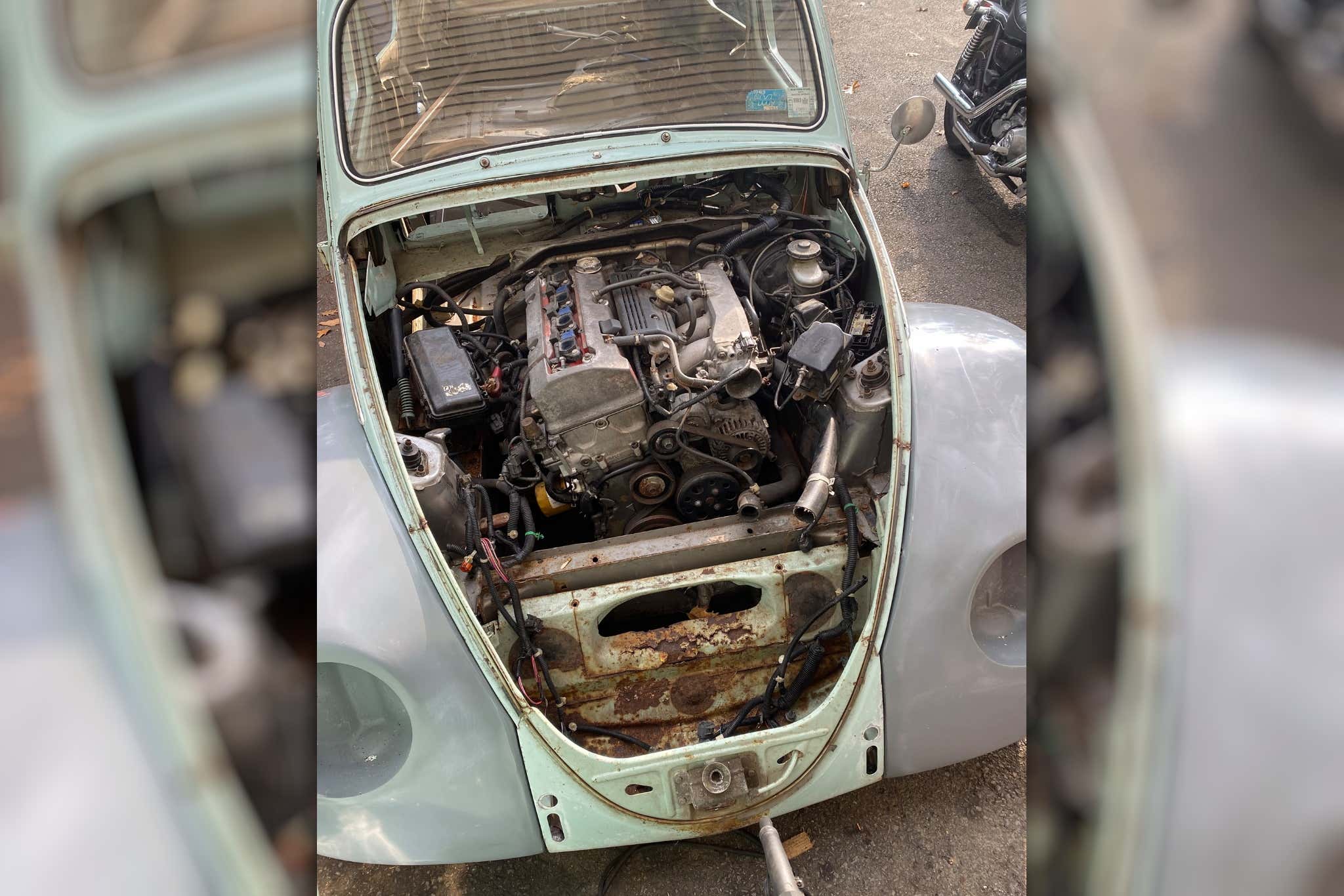 “A good friend that works for a towing company sent me a Snapchat of a wrecked 2005 AP2 S2000 sitting at an impound/repair facility in Connecticut. Immediately my brain started turning, googling dimensions,” Dawson told us. “I went to the Beetle with a tape measurer, and soon I had gathered everything I needed in my mind to be able to pull it off. [The] Wheelbase matched perfectly; 94.5 inches.”

What started as a long-anticipated Beetle refresh had turned into something else completely. With the S2000 towed back to Dawson’s home, the hacking began in order to fit the Japanese sports car underneath the curved arches of the classic VW. Before the two officially met, though, Dawson didn’t miss the opportunity to take his newly-acquired S2000 buggy for a ride after peeling back layers of the Honda all weekend.

“I spent Saturday cutting the mangled little Honda… [but] by lunchtime [on Sunday] I ratchet strapped the steering column up into place, put a milk crate onto the floor pan, and proceeded to drive the chassis around the neighborhood,” he said. 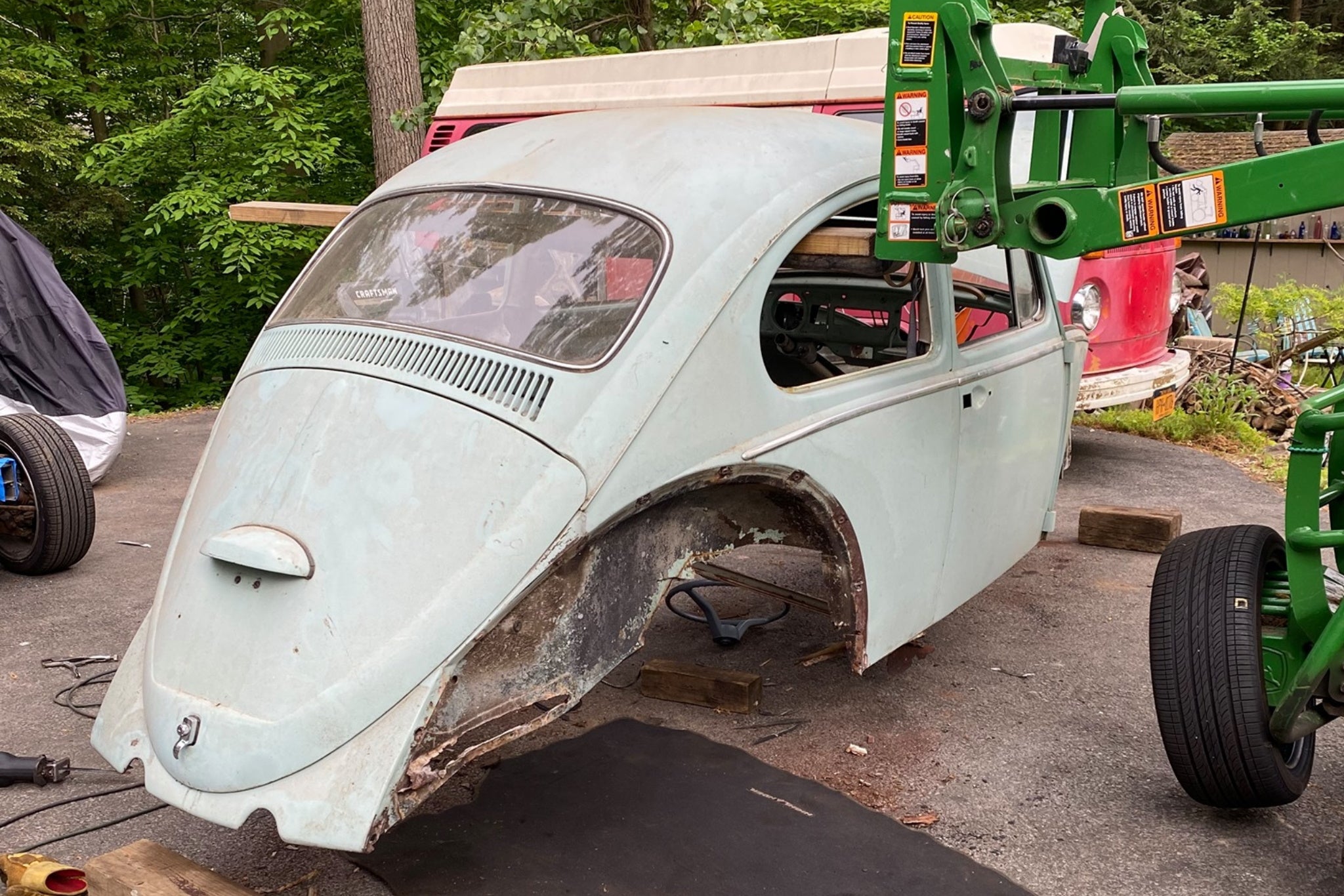 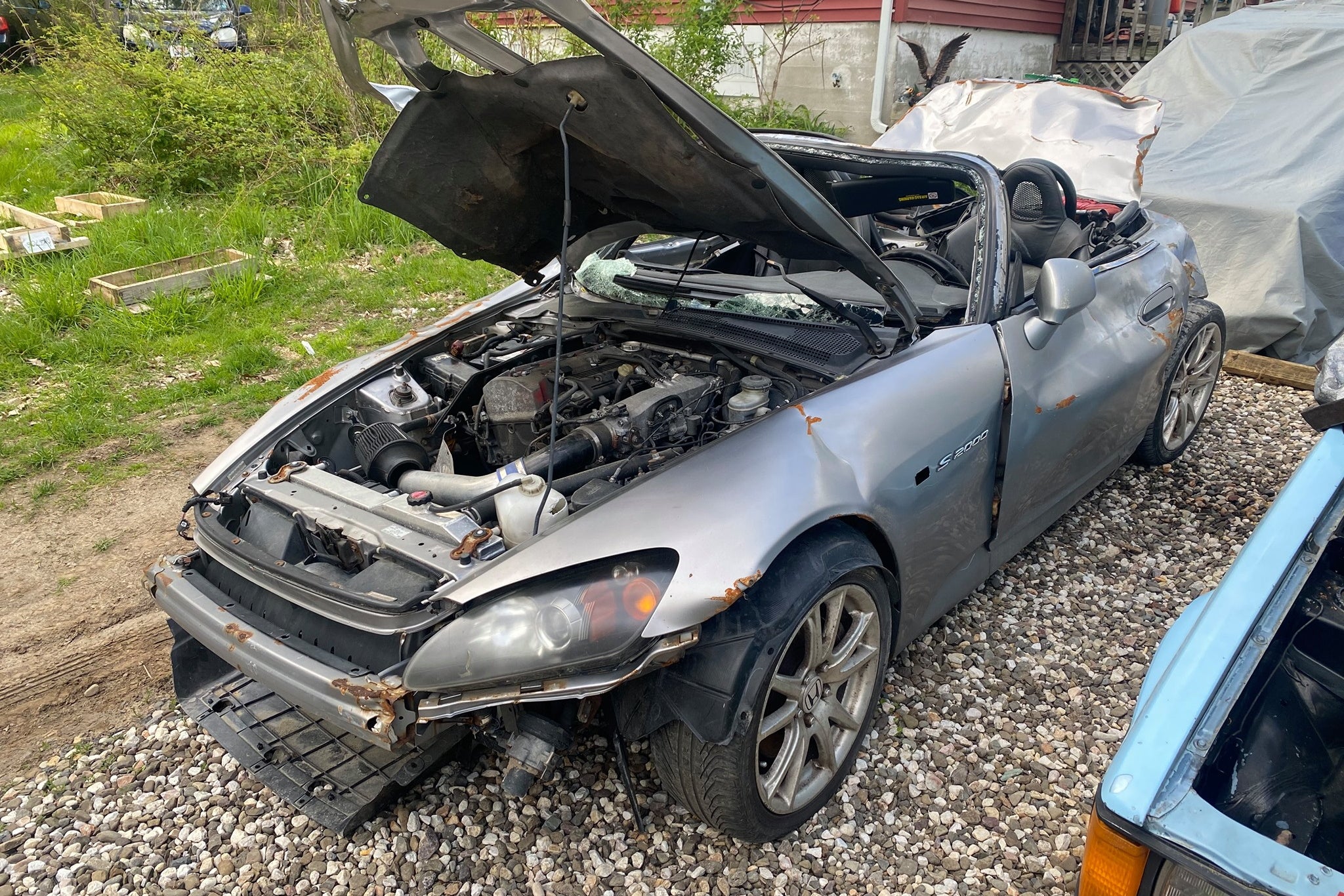 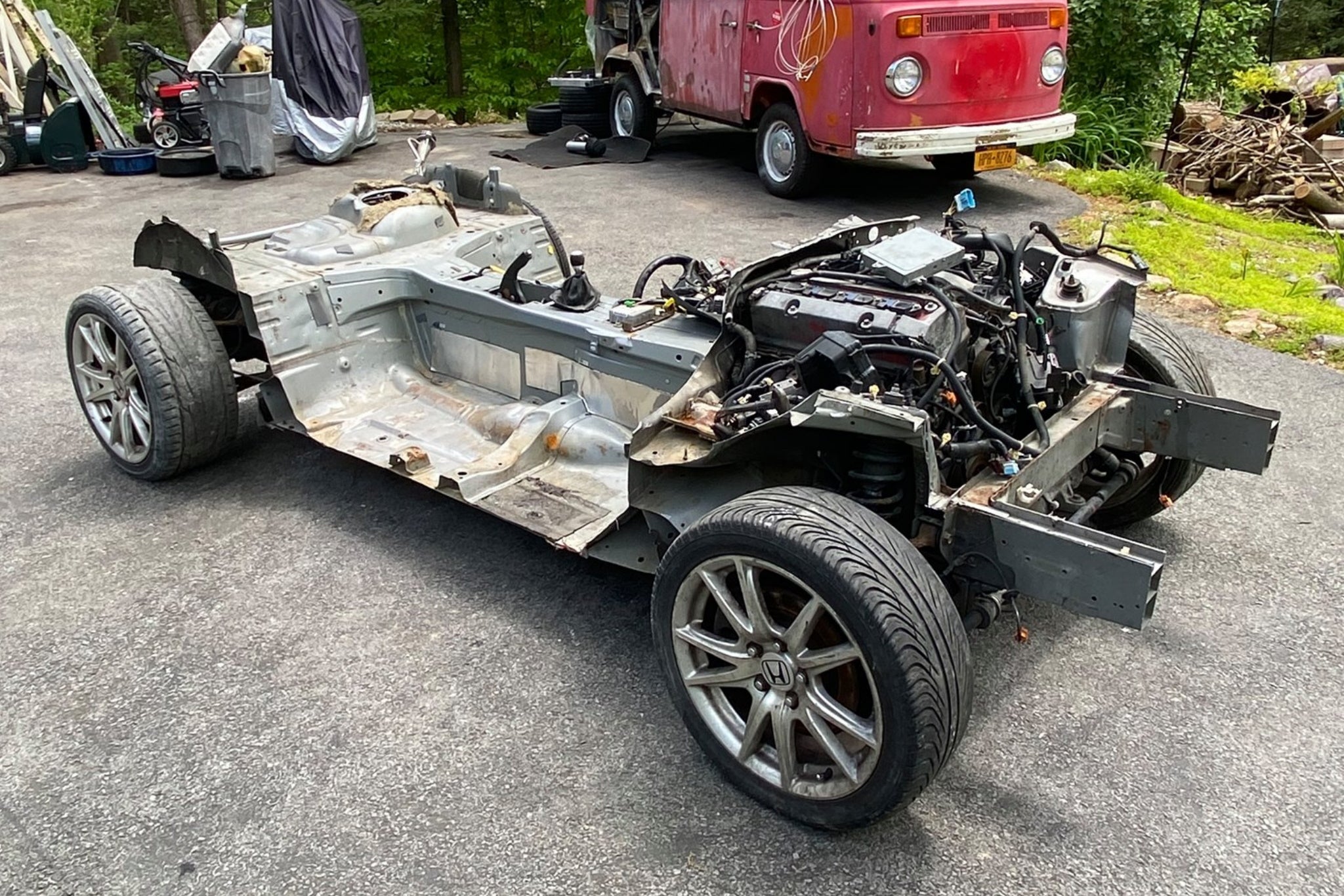 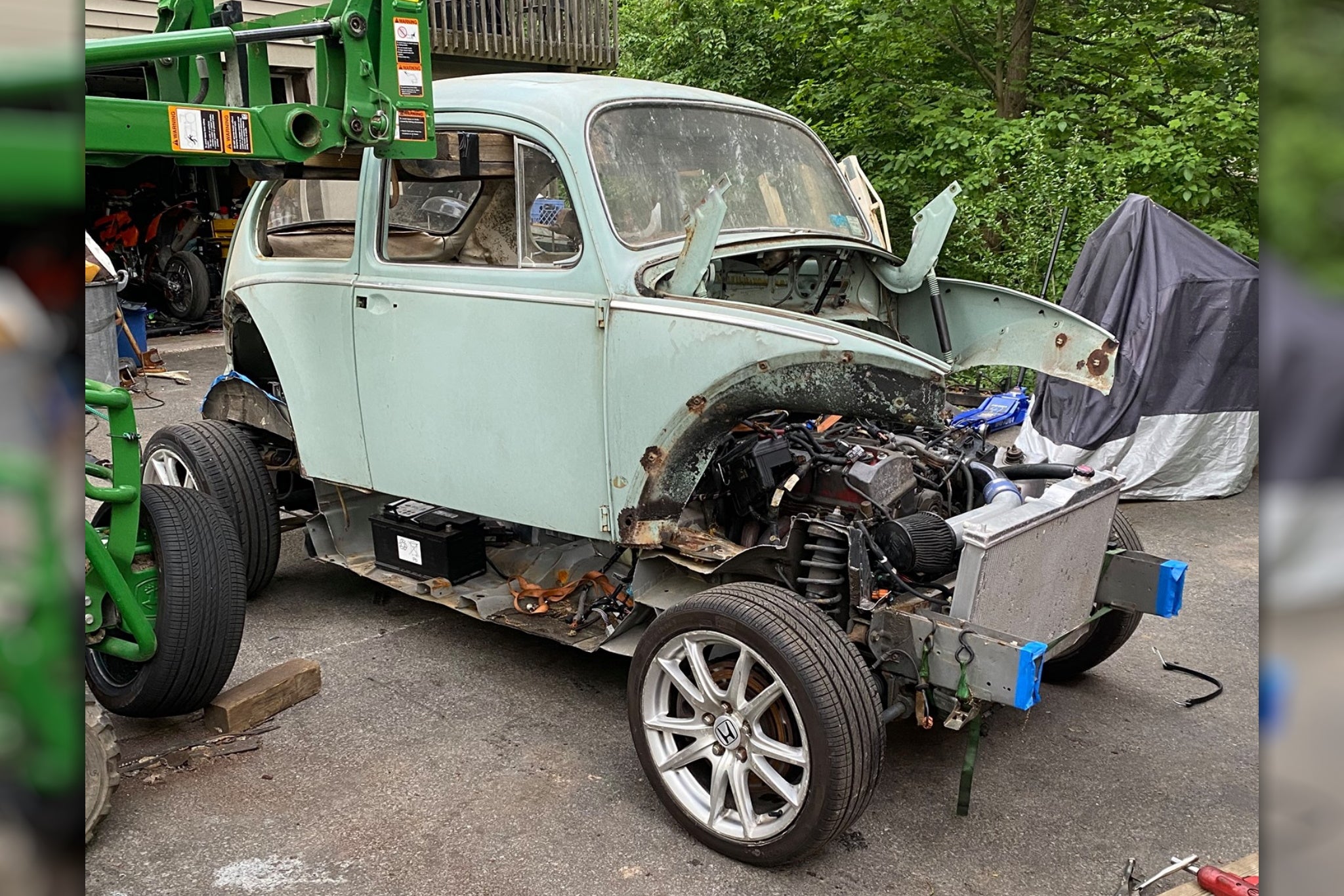 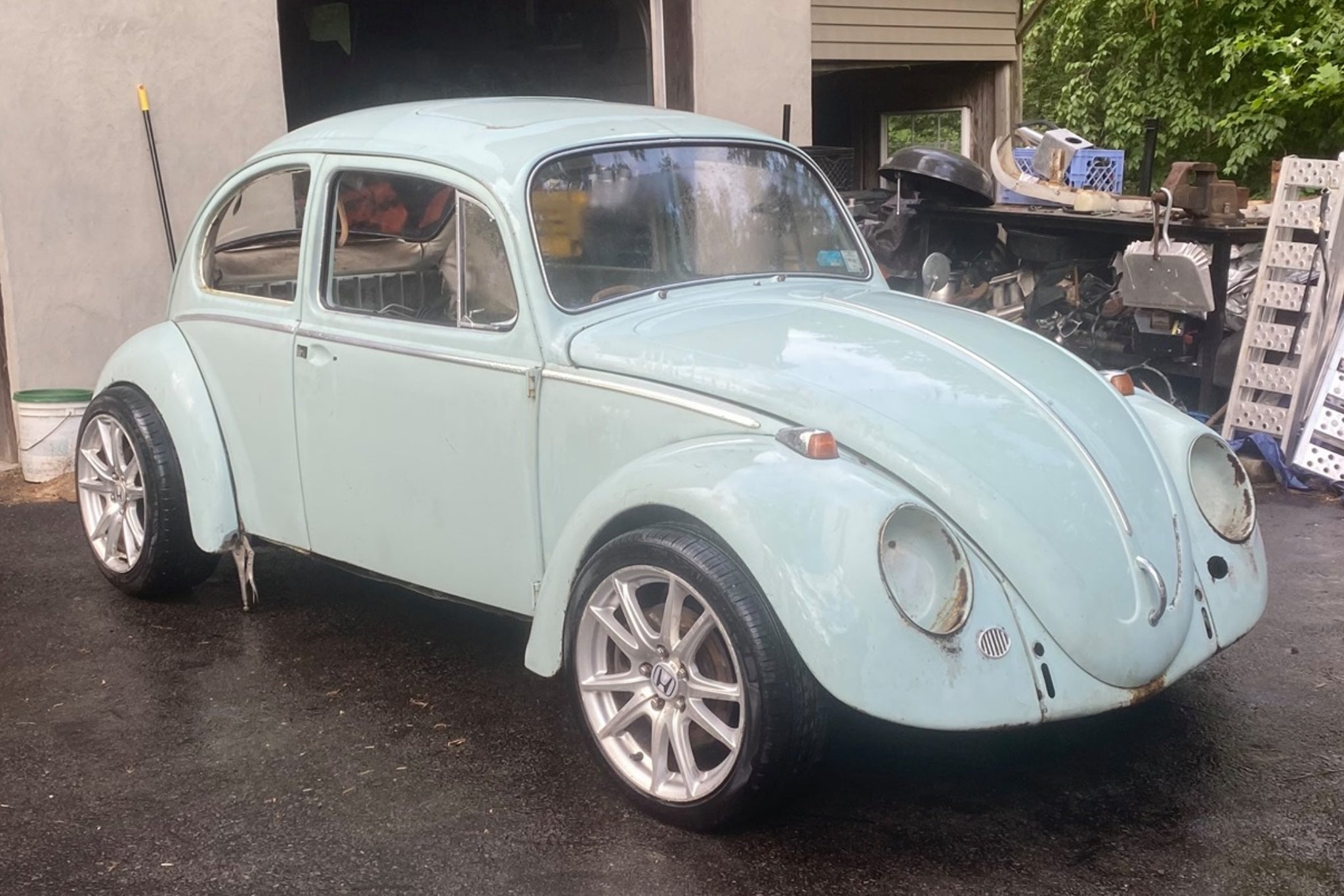 After the joyride, the project continued. Dawson indicates nine inches of material were removed from each side of the S2000 to make it fit inside the confines of the Beetle body, as well as more than a foot of metal from the front and rear of the car. After that, though, it all began to come together over the course of just a few weekends. The creation’s builder says his busy schedule necessitated the speed of the build. “It took me just two weekends to make them one for the most part,” Dawson said. “I work quickly which I have to with everything going on in my life.”

That busy schedule is, unfortunately, what’s holding the project back from completion, among other things. Parts delays, the lack of a garage at his home, and a slew of other vehicles Dawson has to work on are also contributing factors. “Owning nine other project cars that also need attention is also tough but not the worst problem to have. What really pushed back progress was ordering widened fiberglass fenders in May of this year—I didn’t expect them to arrive until late September.”

The wheelbase of the S2000 might be the same, but as the narrowing operation that took place on the wrecked AP2 might’ve indicated, the track width is far greater than the Beetle’s. “Wider fenders have been ordered,” Dawson said in an Instagram post. In the attached picture, the S2000’s tires can be seen sticking far outside of the VW’s fenders.

Dawson hopes to have the project done soon, and he’s already figured out where to put some parts that the water-cooled Honda needs that weren’t accounted for in the air-cooled Beetle. The radiator, for instance, is going to find a new home in the trunk. He assures us the decklid of the Volkswagen will be tilted open to allow for proper flow. Beyond that, though, the car is going to remain looking like it does now. “Exterior will get little to no love on the paint,” Dawson told us. “Besides matching the fenders to the body.”

When it’s finally completed, he says there’s a variety of uses for it, but it’s certainly not going to be babied. “I’d say it will definitely be out at some local car shows turning heads. A track day is a possibility but not first on the list,” he said. “I’ve always built my vehicles to be driven, enjoyed, and abused.” 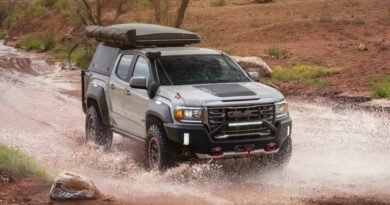 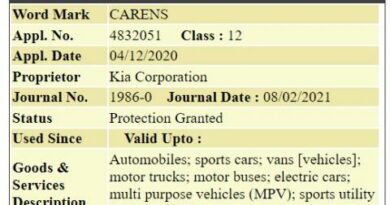 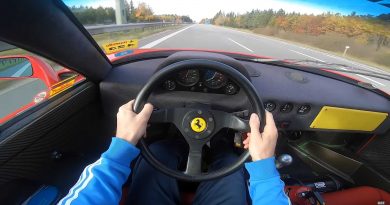