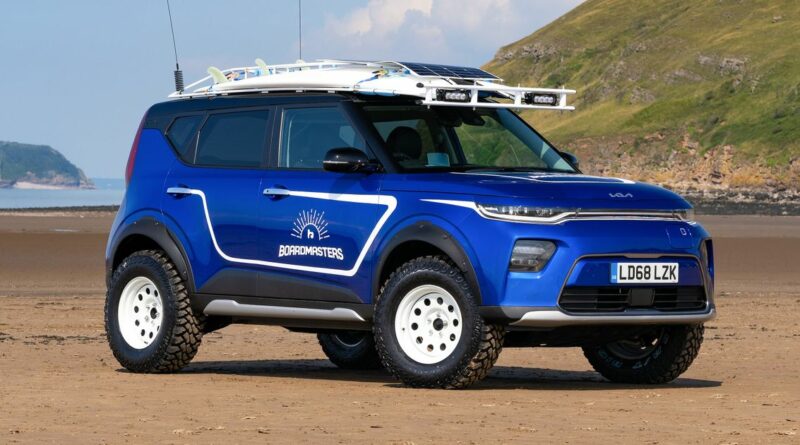 Head down to Cornwall in the summer and you’ll find rows upon rows of Volkswagen Transporters and Californias. Some classic ones are usually scattered along the hard shoulder of the M5, too. Whether it’s a classic or modern example, the VW bus is the must-have surfer transport, but now Kia is aiming to muscle in on the Newquay scene.

And you’ll certainly turn heads if you rock up in this electric monster truck. The Soul was already a quirky-looking box, and we think it looks rad on 30-inch Maxxis Bighorn rally raid tyres and white steelies. The suspension has had a three-inch lift, while Kia has also added some decals which, if you squint, could look like waves on the bright ‘Neptune Blue’ paint. It looks pleasingly Tamiya-like.

It’s hard to miss the Soul EV’s new roof rack. Custom-built from steel tubing, it’s designed to take two surfboards while still allowing the tailgate to open. It features a solar panel and LED spotlights, and looks like something that’d be at home on a Dakar rally. We’re told it’s completely recyclable and, even with two boards on the rack, the Soul will sneak under two-metre height restrictions. At 1,950mm tall, the Boardmasters Edition is the loftiest car Kia makes.

The rear seats have been replaced with a wooden deck, and Kia has added a fold-out bench seat made from reclaimed timber. A swing-out arm is strong enough for a towel or a couple of wetsuits, while the solar panel can power a mini fridge.

The electric powertrain is untouched, so you’ve got a 64kWh battery and a 201bhp electric motor. A standard Kia Soul EV manages 280 miles of range, but we’d expect a fair bit less from the Boardmasters Edition given its mega tyres and roof rack.

Ready to buy one? Sorry dude, it’s unlikely that Kia will actually sell this thing anytime soon. The Soul EV Boardmasters Edition is a one-off, created from a Soul pre-production model that was destined for the scrap heap. The Korean brand did a similar thing with the Kia Stinger GT420, which was turned into a track car.

The one-off Soul is to mark Kia’s partnership with the Boardmasters festival, which runs from 11-15 August. It’ll be displayed alongside the Kia e-Niro, while Kia is also hosting sessions on yoga, fitness and surfing.

Do you like the Kia Soul EV Boardmasters Edition as much as we do? Leave a comment. 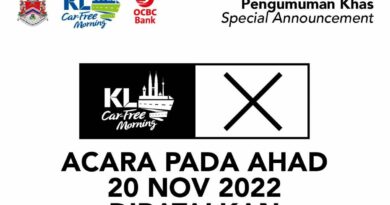 No KL Car Free Morning this Sunday due to GE15 – paultan.org 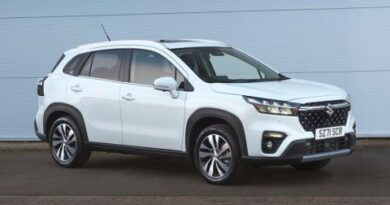