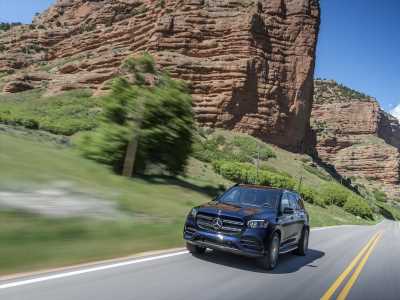 And he wasn’t kidding. Driving it is a supremely lux-o-riffic experience. Mostly. A couple years ago I got a chance to drive the previous-generation GLS back-to-back with the G-Class on twisty mountain roads. Man-oh-man did I prefer the GLS. Now, that sentiment is only increased with the launch of the all-new GLS, which coddles the driver with comfort and protects him or her with electronic safety systems from nose to tail.

In addition to an all-new body inside and out, there are two new mild-hybrid engines: the GLS 450 is powered by a 362-hp 3.0-liter turbocharged inline six, while the GLS 580 gets a 483-hp 4.0-liter turbocharged V8. You can call both of them mild hybrids but Mercedes-Benz calls it EQ Boost. A 48-volt electrical system includes a 0.8-kWh battery that is charged via regenerative braking.

Both models will get EQ Boost, which is an integrated starter-generator system that not only helps with launches by adding 21 more hp and 184 lb ft of torque in both engines but smooths the whole start-stop process considerably. When the engines stop, Mercedes has calculated exactly where in the crank rotation is the best point to do so, the result being that the minimum amount of effort is required to start them back up again. There’s also a function called “sailing,” that shuts the engine off when you are coasting downhill or just coasting with no throttle. It’s kind of cool.

Fuel economy numbers are not out yet but should be available closer to the GLS’ launch toward the end of the year. If you want to approximate, Mercedes says provisional Europe-only measurements give a range of 18.4 mpg city and 28.3 mpg hwy for the V8-powered GLS 450 4MATIC on the European NEDC test. Just remember that the NEDC test has been criticized in the past for being wildly optimistic in the mileage figures it produces. U.S. figures will probably not equal that and have not been released.

Both engines are mated to the 9G-Tronic nine-speed automatic, which is so smooth and seamless as to be almost unnoticed underway.

The air suspension soaks up trailers like a sponge

Those drivetrains sit in an all-new body controlled by an all-new active suspension. AIRMATIC air suspension and Adaptive Damping System Plus are both standard. With the standard 48-volt system, buyers can opt for E-ACTIVE Body Control, which performs a number of parlor tricks by quickly raising or lowering suspension height at each wheel individually. Let’s let Mercedes explain it:

“As the only system on the market where the spring and damping forces can be individually controlled at each wheel, E-Active body control is the world’s most intelligent SUV suspension that uses Road Surface Scan and a Curve Inclination Function to make an extraordinary level of comfort possible. The hydropneumatics generate dynamic forces that overlay the air suspension forces and actively support and dampen the vehicle body during linear and lateral acceleration or when driving on uneven roads.”

What that means is that each corner of the body can be raised or lowered remarkably fast as conditions dictate. For instance, you can switch on the Curve Inclination Function to raise the outside corners of the GLS  in a turn and lower the insides, thus leaning your Benz into each corner. Off-road, the Road Surface Scan identifies holes and bumps and sets the individual wheels to harden, soften, raise or lower as appropriate, making off-roading more of a smooth, floating dream. Stuck in deep sand? The system hops all four wheels up and down until you’re back on top of it and off you go. There’s even a carwash mode, which raises all four corners, as well as folds the mirrors and closes the doors and sunroof, while setting the climate control to recirc.

The 4MATIC variable all-wheel drive, meanwhile, includes a transfer case with an electronically controlled multi-plate clutch that can transfer from zero to 100 percent of torque between the axles. Off-road, there is a reduction gear for crawling about. On-road, the transfer case distributes torque fore and aft as necessary “…to specifically influence the degree of yaw to induce oversteer or understeer.”

It sounds pretty comprehensive. So in the wilds of Utah’s Wasatch Range, I set out to see how it felt. I started in the GLS 450 4MATIC with the straight six.

First, I had to try out that Curve thing. It was wild, leaning more than I expected it to and doing it faster than I thought possible. It didn’t seem to run out of steam, either. There is no giant air pressure reservoir that it draws from. Electric pumps at each wheel change pressures immediately to raise and lower the car at each corner. It felt a little goofy at first, but so did variable-ratio steering when I first drove a car with that. I gave Curve Inclination Function more time, then some more, then shut it off. Maybe when I get my long-term GLS I can try it out for a week at a time.

As for the entry level straight six, on two-lane highways the 450 felt like it had all the power an owner would want. I never thought it was lacking power or torque during the on-pavement drive. So if you’re trying to save $22,600 by getting the straight six instead of the V8, I say, go for it. It was quiet and smooth the whole time, well worth the $76,195 starting sticker price, I thought as I drove along, knowing, at the same time, that I would never spend $76,195 on anything. You can, though, you’re in the demographic.

Mercedes didn’t release prices of higher-zoot trim levels or options, those will come closer to the car’s on-sale date toward the end of this year. The V8-powered GLS 580 4Matic, meanwhile, will start at $98,795 before you add anything.

Next, I turned the GLS 450 4MATIC off the pavement and up into the mighty Wasatch mountains, following a semi-narrow dirt road favored by those little side-by-side things, you know, Polaris RZRs and Yamaha YXZ1000Rs. In the back seat of my GLS was a real German engineer who not only knew the GLS but knew the trail, too. He pointed out when to raise and lower the ride height via a center console-mounted toggle, and when to switch into 4-wheel high and 4-wheel low. There was a function on the 12.3-inch infotainment screen, one of two 12.3-inch screens facing me, that recorded points for how well you were off-roading. Mostly it was smoothness, whether you jabbed the throttle or stomped on the brakes. I got a score of 78, whatever that meant. The German engineer said that was the best he’d seen, and German engineers can’t lie.

With its unibody construction and luxury leanings, the GLS is not, obviously, your first choice for rock crawling, nor is it supposed to be. But it did crawl up and inch down a number of sections that surprised me. I always ask myself, could a ’59 Cadillac get up this? Not this it couldn’t. There were good-sized ruts, microwave oven-sized rocks and a few holes big enough to accommodate a human head or two. There was even a stream crossing. The GLS ate them all up.

Back on the pavement it was a short drive to the staging area where I swapped the I6-powered GLS 450 for the V8-powered GLS 580. Outside and inside you can’t really tell the difference. It was power and torque that should stand out. But power in both engines peaks at 5500 rpm, and the straight six’s torque peak started at 1600 revs to the V8’s 2000. So despite its greater numbers, the V8 didn’t stand out as much as you might assume. Yes, you can feel it, especially at higher revs, and maybe if you were towing something. Yes, 0-60 comes up in 5.2 seconds with the V8 compared to the I6’s 5.9, but the difference is not all that great. And both are electronically limited to a top speed of 130 mph (not saying I verified that on a lonely, flat stretch of Utah highway, but…). So feel free to order a straight six.

One thing that did get my attention, over and over, was the MBUX infotainment spectacular. It is programmed to react when it hears the word, “Mercedes.” So if you’re having a conversation with an engineer on a press trip in the new MERCEDES, expect it to continually interrupt you and ask how it can serve you. I finally had it shut itself off, but it would default to on every time you restarted the engine. Argh.

Ah yes, the MBUX. Its full name is Mercedes-Benz User Experience. If you buy one of these cars, spend several days or maybe a week at the dealership learning everything about this “completely new multimedia system featuring innovative technology based on Artificial Intelligence and an intuitive operating system.” Intuitive means you can operate it via voice control, touchscreen, touchpad or touch control buttons on the steering wheel. It even senses your approaching hand and has the screen react appropriately. It includes intelligent voice control with natural language understanding.

Yet it drove me crazy.

You will grasp it quickly, I’m sure. Just pay attention to the tutorial at the dealership. Those guys’ll know what they’re talking about. And remember, I have been driven crazy by Mercedes interfaces for decades, sometimes pulling off the freeway, and stopping and starting the car to exorcise them. Sometimes that worked. These new rigs are much better, mostly.

Among the many, many other systems, and these are only scratching the surface of the acronym-happy GLS, is one that yanks the wheel out of your hands when it thinks you are veering across lanes. This sure got my attention. Granted, it did it when I was, in fact, crossing over the center-lane stripes, but I was doing that  because there was a bicyclist on the right side of the road and I wanted to give him room. There was no oncoming traffic, but the system yanked the wheel to the right suddenly, assuming I had fallen completely asleep. I’m not sure which of the 18 or so “safety systems” loaded into this car was responsible, but I’d encourage Benz to fine tune it a little.

Overall, though, I would gladly have one of these beasts in the driveway, were I in the demographic for it. Mercedes lists competitors as the BMW X7, Lexus LX570, Cadillac Escalade and Infiniti QX80. Given that list, and assuming I had the cash, I would take this all-new Mercedes. It is the S-Class of SUVs, after all. Try it out when it enters showrooms later this year and see if you agree. 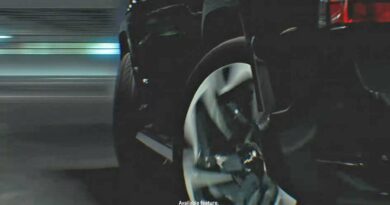 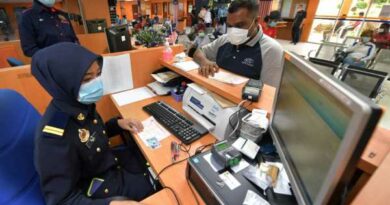 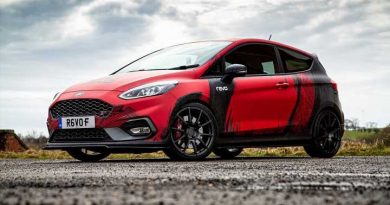