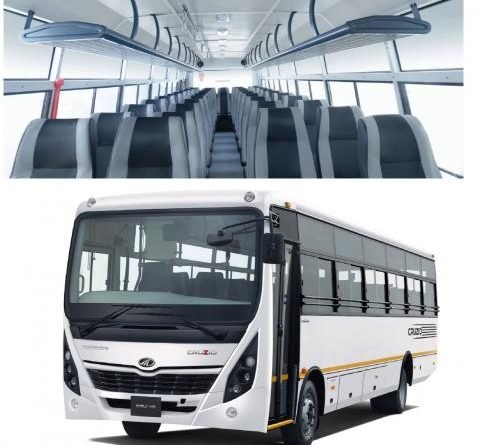 Mahindra has unveiled the Cruzio – its new range of buses based on the Intermediate Commercial Vehicle (ICV) platform. The new buses are aimed at the employee transport segment.

According to the company, the Cruzio is Mahindra’s first Lastwagen Pullman Overhang (LPO) bus. It meets the Rollover Test norms as per AIS 031, Bus Body code as per AIS 052 and complies with regulatory requirements of AIS 153.

Mahindra claims that the Cruzio comes equipped with contoured seats with full back support that are the widest in class and a broad gangway.

Mahindra also claims that the Cruzio offers better visibility and has bigger brakes, parabolic suspension and the highest ground clearance in its segment.

The Cruzio is powered by an MDI Tech engine with Mahindra’s FuelSmart technology that has modes which are claimed to optimize fuel consumption and engine power depending on the load and road conditions. It also gets an Intelligent Driver Information System (DIS).

Mahindra will manufacture the Cruzio at its Zaheerabad facility in the state of Telangana.