As electric vehicle adoption takes off, automakers are looking at innovative ways to stand out in what’s becoming a crowded segment. For some, that’s solid-state batteries. For others who prefer to stack the deck with multiple options, that’s hydrogen.

On Tuesday, Hyundai announced its plans to more heavily invest in hydrogen-assisted fuel cell electric vehicles (FCEVs), beginning with the launch of its next-generation hydrogen powertrain in 2023. And while it expects the push toward H2 will be challenging with few other companies pioneering the tech, it expects to launch fuel cell versions of commercial vehicles as early as 2028 with plans to “popularize” the tech by 2040. 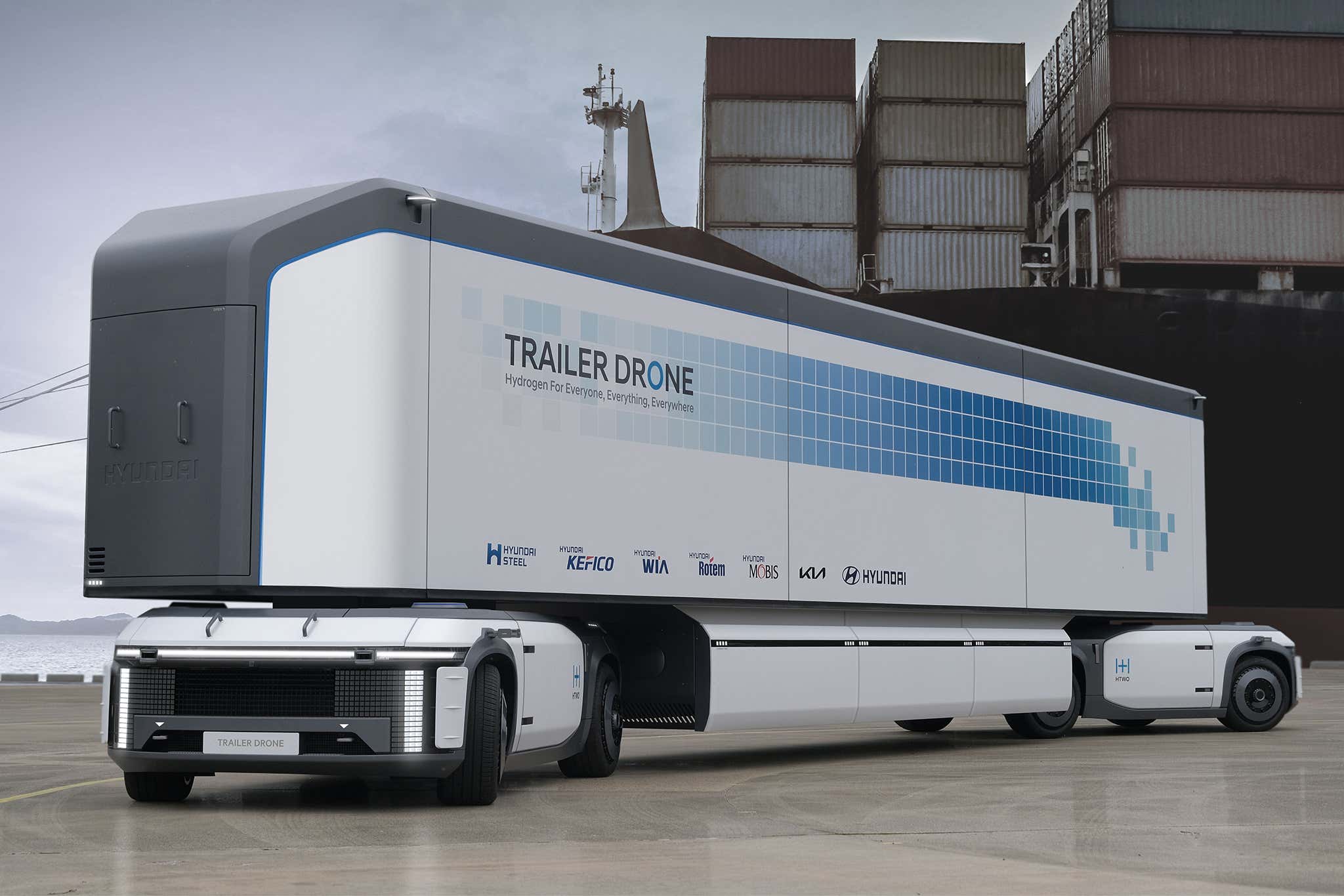 The news of Hyundai’s focus on FCEVs dropped on Tuesday during the automaker’s “Hydrogen Wave” announcement at the IAA auto show in Munich, Germany, where it also announced a number of new concepts and upcoming products.

Behind the commitment is the automaker’s third-generation hydrogen powertrain, which it says will be 30 percent smaller, 50 percent cheaper, and twice as powerful as its current fuel cell system. Hyundai plans to fully introduce the 100-kilowatt and 200-kW versions of its fuel cells in 2023, and make all of its commercial vehicles available as FCEVs by 2028.

Hyundai then showed off a “trailer drone” concept which uses two hydrogen-powered e-Bogies (named after the portion of a train car that packages the train’s wheelset and primary suspension) to move and steer. 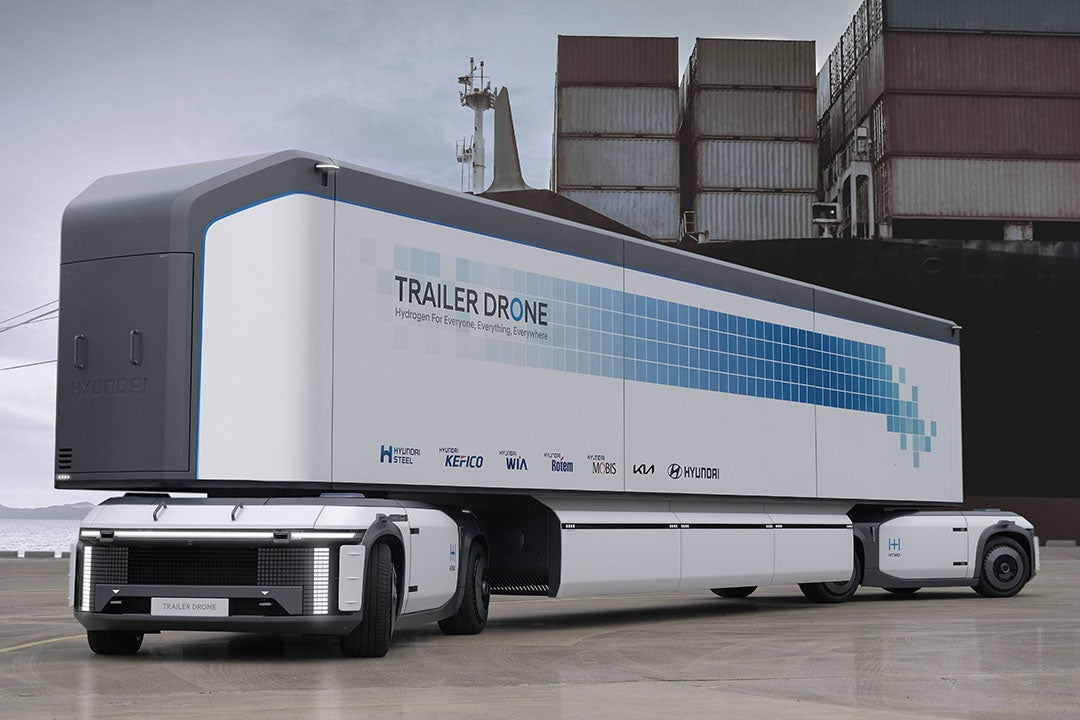 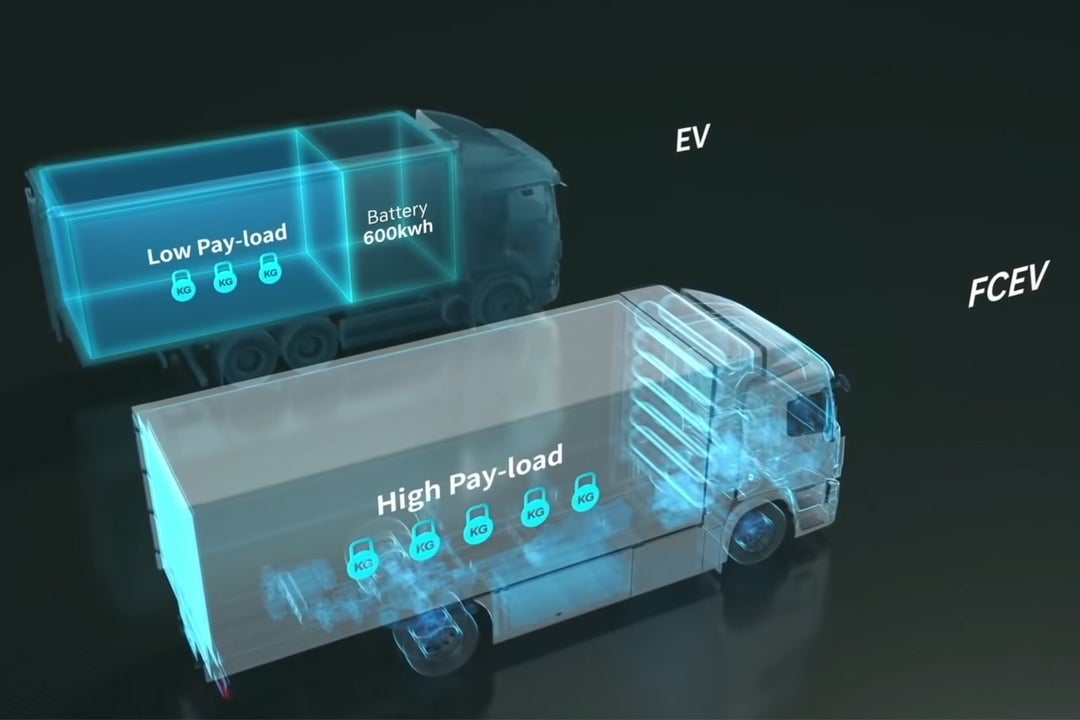 More intriguing to the enthusiast market is Hyundai’s Vision FK Concept, a 670-horsepower plug-in fuel cell hybrid with a mid-mounted power unit. Hyundai says the coupe is capable of hitting 60 miles per hour in under four seconds while boasting an expected range of 372 miles between fill-ups.

The exciting concept is a collaboration between Hyundai and high-performance EV maker Rimac, which the South Korean automaker previously invested nearly $90 million in. Albert Biermann, head of R&D at Hyundai, says that it tapped Rimac to solve the problem of an “extremely complicated” packaging situation with the FCEV system, something which appears to be solved with a Nevera-like battery pack.

It doesn’t stop there, either. Hyundai is going full Tesla Solar on the world by hedging that its fuel cells can be used for more than just vehicles, but also as power unit modules that can supply up to one megawatt of juice when needed.

While Hyundai specifically calls out use-cases for ships and datacenters, company chairman Euisun Chung also says that it could apply to “homes, workplaces, and factories.” By 2040, the manufacturer believes that its breakthroughs in hydrogen power can help to foster “a worldwide hydrogen society.”

Hyundai also showed off other concepts like the H Moving Station, a portable heavy-duty refueling facility for locations where there is no hydrogen power. Then there’s the Rescue Hydrogen Generator Vehicle, which essentially does the same for EVs in even more remote and off-road locations.

Hyundai’s goals seem ambitious, especially in such a short timeframe. The automaker has been working on hydrogen powertrains for more than 20 years, though, so it’s not as if the concept is new to its engineers. The biggest hangup is the same one EVs are experiencing right now: a proper network of stations to replenish the spent energy.

In the United States, there are only 48 hydrogen fueling stations, 47 of which are in California and one just outside of Hawaii’s capital, Honolulu. For reference, the U.S. is still growing its EV charging network and has 19,635 DC fast chargers at 5,380 locations, 11,217 of which are operated by Tesla. Hyundai specifically references the U.S. government’s support to establish hydrogen refueling locations, which means that it may be betting on the $1 trillion infrastructure bill that pledges $8 billion for four “regional clean hydrogen hubs.” Hyundai may also lean on the government’s support for creating infrastructure suitable for the long-haul trucking industry instead of focusing on consumer-level output for passenger cars at first.

Saehoon Kim, executive vice president and head of Hyundai’s Fuel Cell Center, is confident the group will hit these goals in the given timeline. He concludes that while the move to hydrogen is difficult, Hyundai can lead the way. The manufacturer says it expects 80 percent of its global sales to be made up of battery-electric cars and fuel cell vehicles by 2040, meaning it will likely rely on BEV tech as a stepping stone to its hydrogen plans. In all, it aims to make hydrogen power as cheap as EVs by the decade’s end. 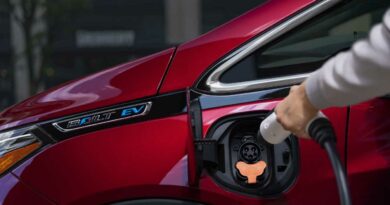 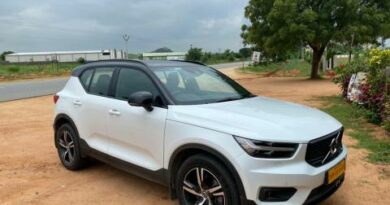