Home » News & Features » Honda Passport Gets Refreshed for 2022, Plus a New TrailSport Edition 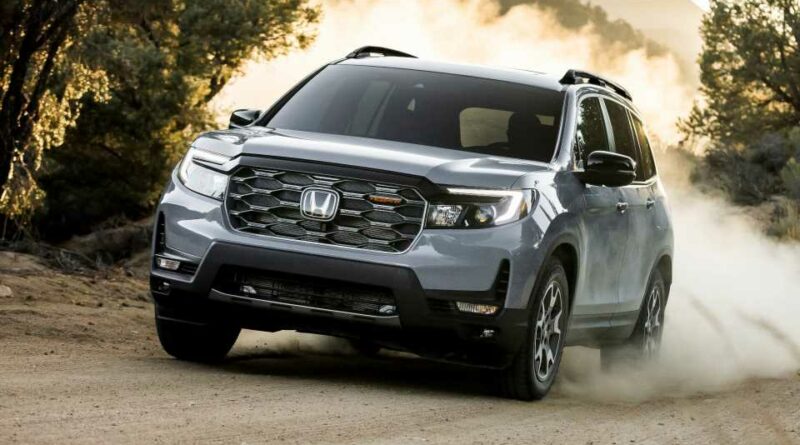 The current Honda Passport has been on sale since the 2019 model year, slotting in just above the CR-V in size and below the 3-row Honda Pilot. Now, as automakers gear up for the 2022 model year, Honda has announced the Passport is getting refreshed, with an eye to adventure.

The eagle-eyed will notice several differences right off the bat. The front fascia has been totally reworked, now aping the broader, more macho design of the 2021 Honda Ridgeline pickup truck. In fact, there’s new metal from the A-pillar forward, including a new power-bulge hood and redesigned front fenders to go with the more squared-off nose. The look from the rear is more aggressive as well, with a new rear bumper featuring a bigger dual exhaust. 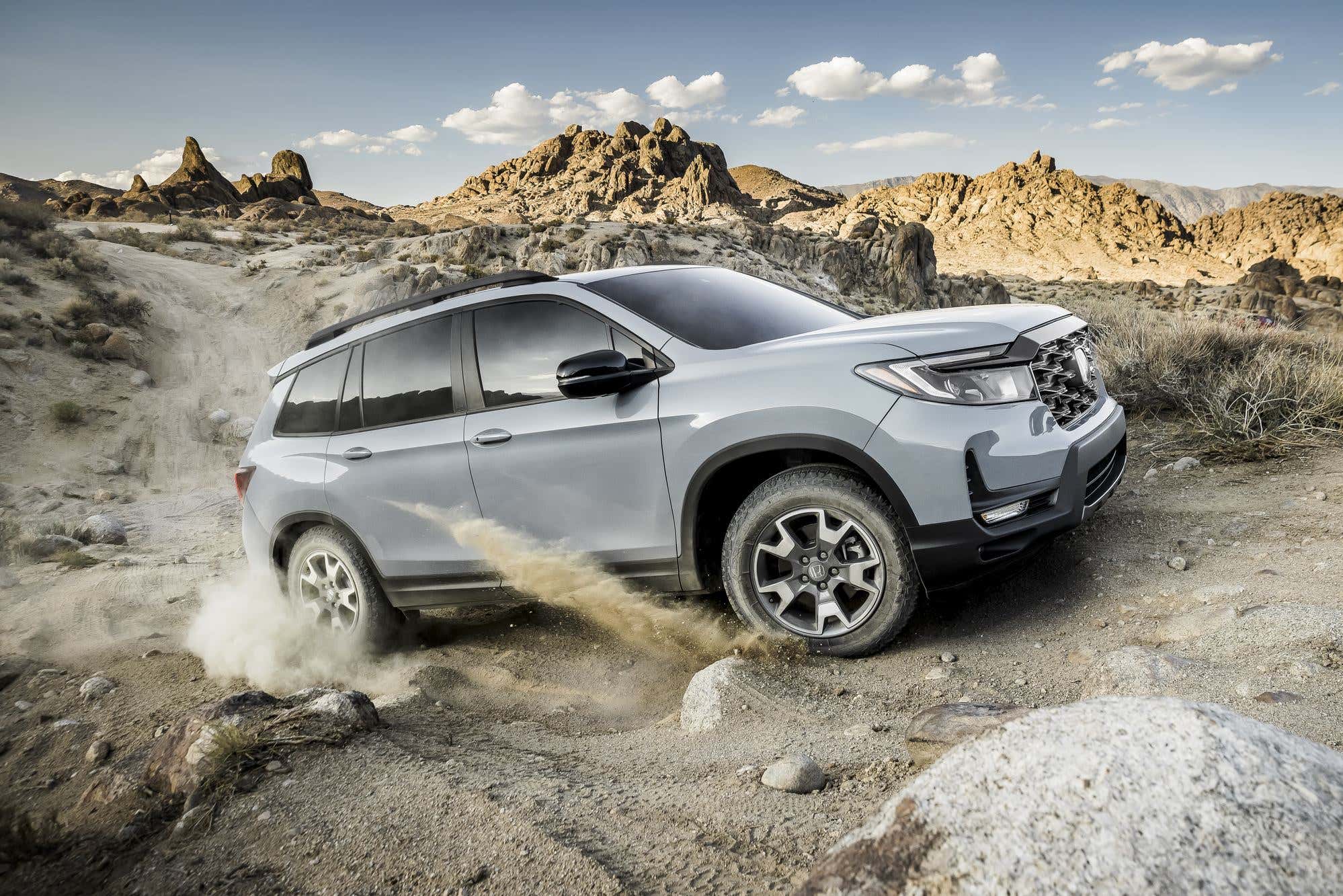 Honda’s aim is for the new rugged look to reflect the vehicle’s off-road abilities, something often overlooked in the regular SUV space. Notably, the Passport has 8.1 inches of ground clearance in the AWD models according to Honda, which is equal with that of the Jeep Grand Cherokee Trackhawk. Now you know!

Taking things up a notch in this very direction is the new Passport TrailSport trim. As you might expect, it also features all-wheel-drive as standard, with Honda’s i-VTM4 torque vectoring system present and accounted for. There are also unique 18″ wheels, and the front and rear track width is increased 10mm for a wider stance. Honda notes it has selected tires with sidewall tread for “a more rugged look,” as well as improved traction in sand and mud, one would think. 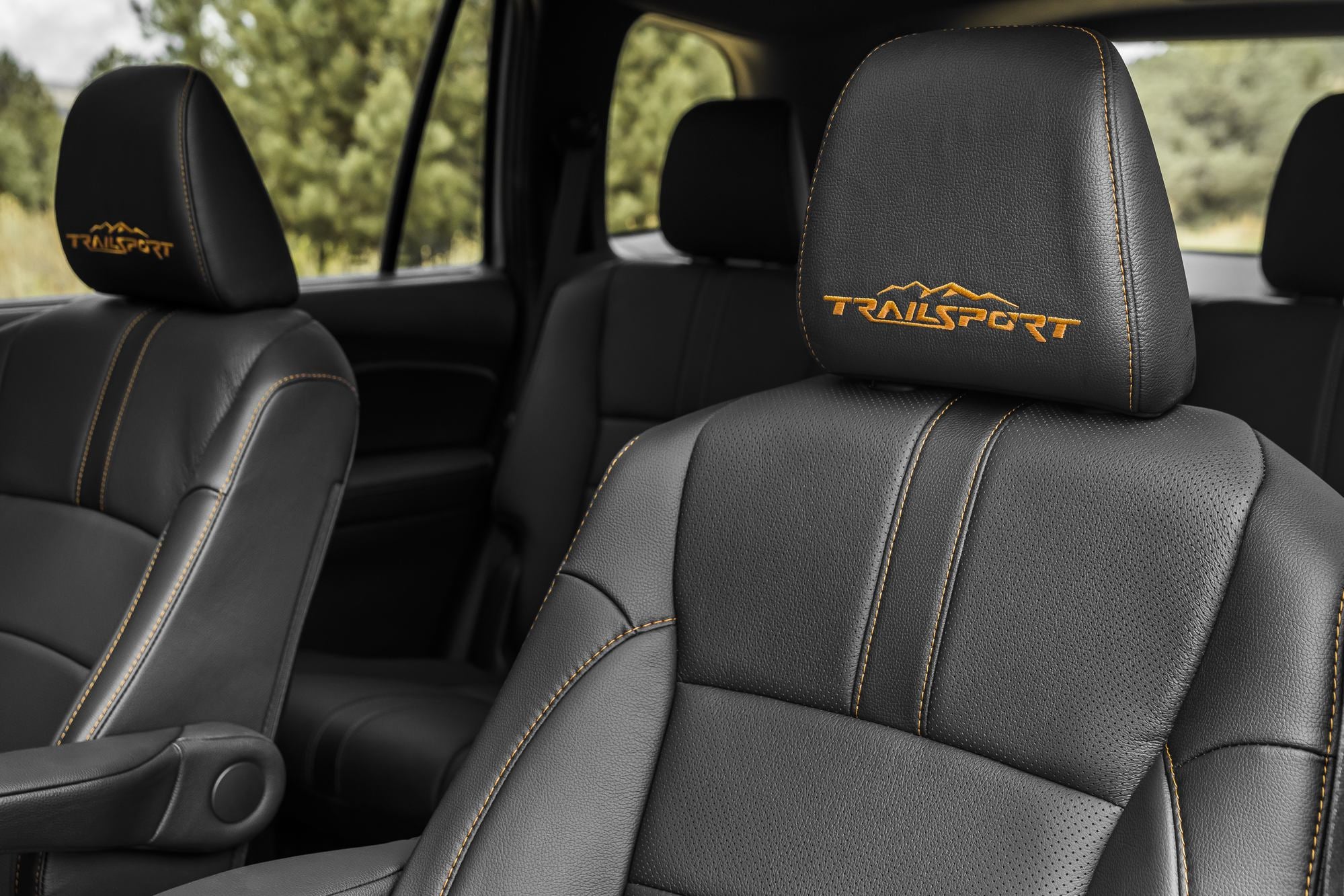 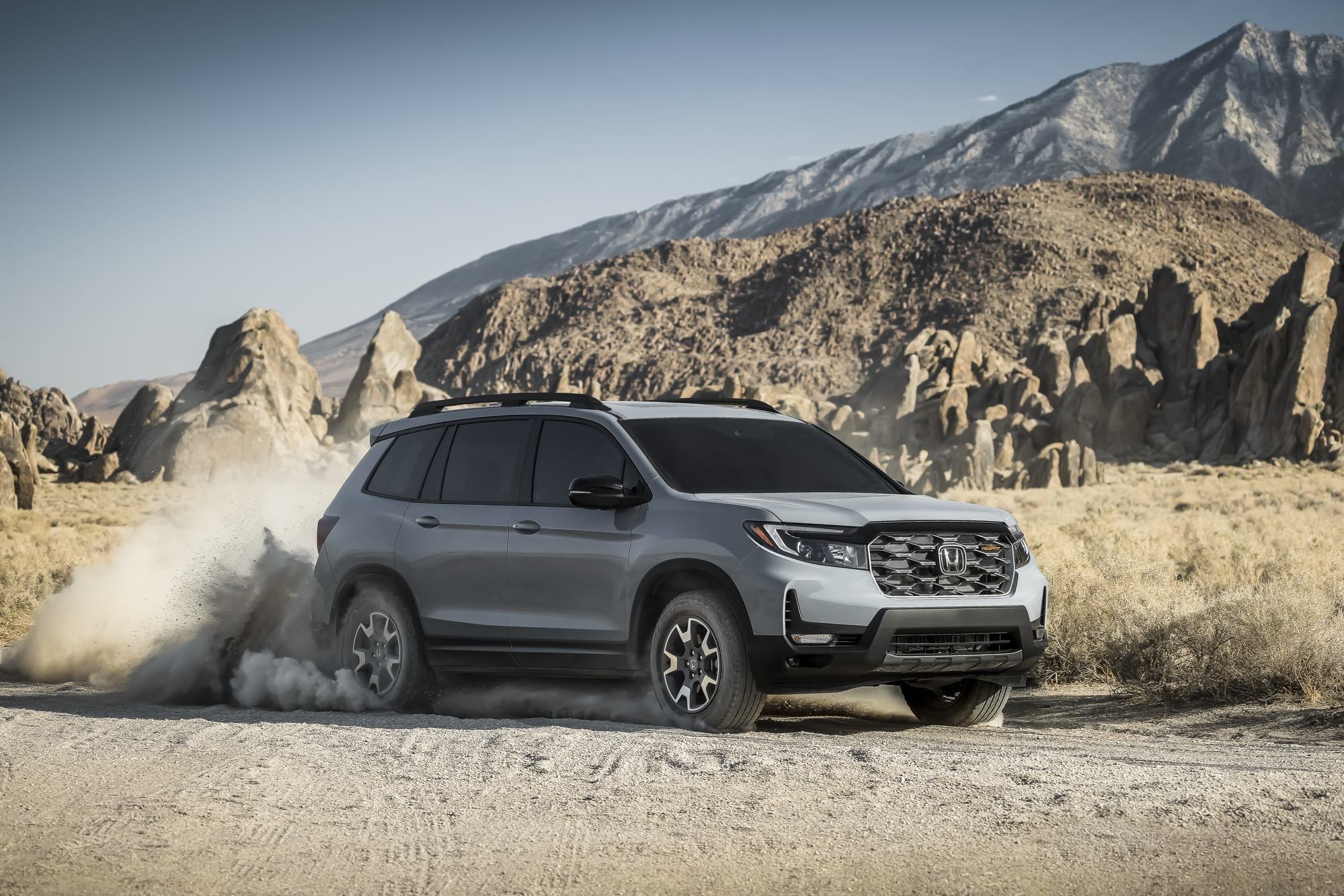 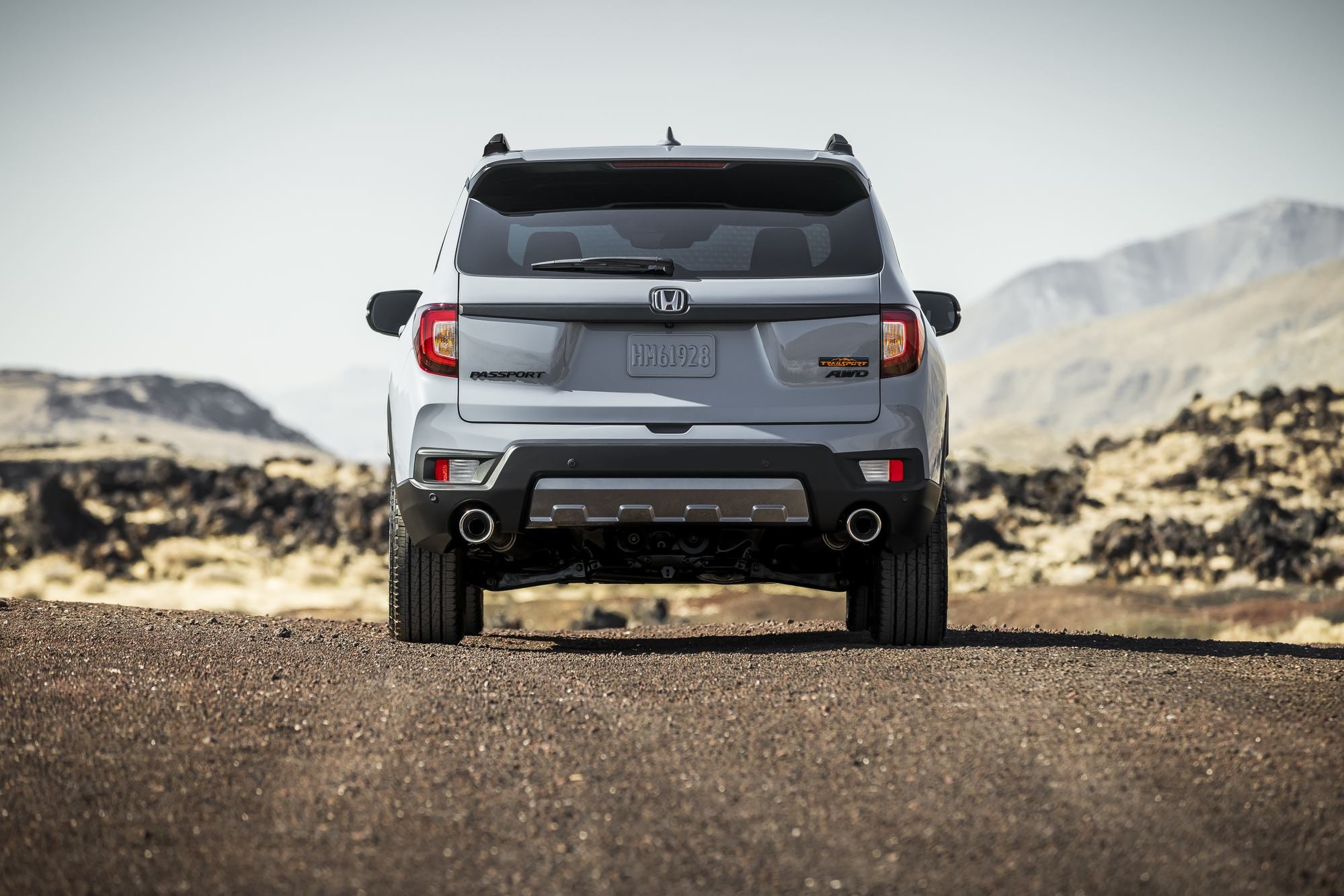 There are exclusive styling touches, too, like contrast orange stitching inside, and the TrailSport logo molded into the rubber floor mats and embroidered on the front seat headrests. There’s even a TrailSport-specific black chrome gauge surround, so get excited for that. Honda’s press release does specifically note that the gauge lighting and needles are otherwise the same as the rest of the Passport line-up, though. Other touches include unique front and rear garnishes and badging on the vehicle.

At this stage, the TrailSport trim is mostly an appearance package, intended to boost awareness of the platform’s existing off-road capabilities. However, Honda has stated that in future model years, “possible future upgrades” may include “more aggressive tires and off-road tuned suspension.” It’s in line with previous murmurs around the new branding. Combined with other simple features like skid plates and some advanced off-road all-wheel-drive modes, and Honda’s SUVs could jump up a level in capability without a lot of fuss.

The sole engine option across the range remains the 3.5-liter V6, good for 280 horsepower and paired with a 9-speed automatic transmission. Less headline grabbing, the refresh also makes the Rear Seat Reminder standard on all trims to help drivers remember to check on rear seat occupants. Seatbelt reminders for the rear seats will also be fitted across the range. 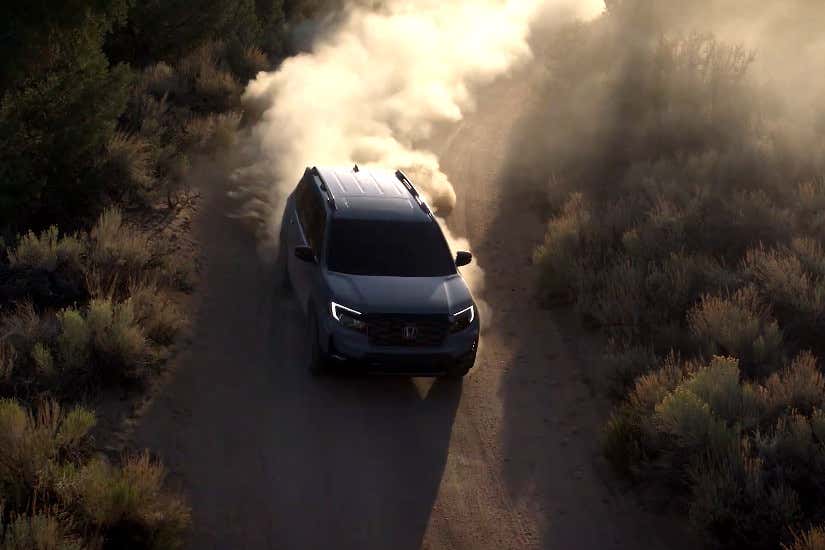 Overall, it’s not a crazy change so much as an incremental update. However, it indicates that Honda is proud of the capabilities of its SUVs, both on road and off, and could signal that it will be doing more to highlight this in future. We could certainly see some drivers getting into the idea of a tougher, more rugged Honda and taking it out on the trail. If the TrailSport trim sees a good response, expect more in this space to come. 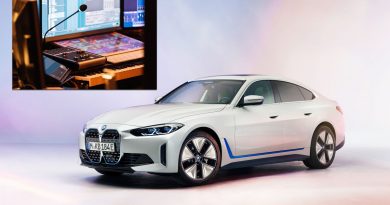 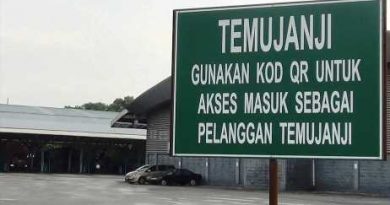