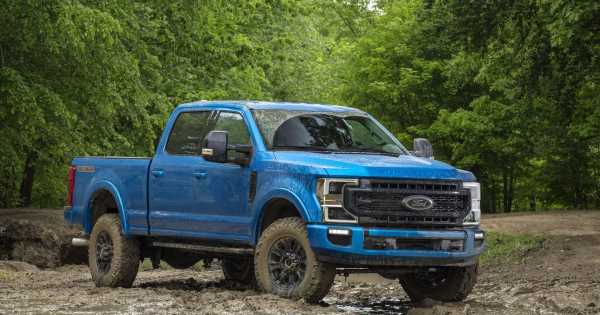 Ford’s all-new heavy-duty pick-up, the F-series Super Duty, now has a special off-road package. The Tremor pack, available on the 7.3-litre petrol V8 and the 6.7-litre diesel models, adds a range of must-have hardware for anyone serious about going off-road.

Firstly, the Tremor pack comes with a set of 18-inch matte black alloys with 35-inch diameter Goodyear Wrangler Duratrac tyres. That’s a 285/75R18 tyre, to anyone who doesn’t size their tyres purely by their outer diameter.

To improve ground clearance even further, and make sure those massive tyres don’t get anywhere near the Super Duty’s arches, the front has been raised up by two inches. Meanwhile the front air dam is shorter to improve the pick-up’s approach angle. The Tremor pack gives the Super Duty an official wading depth of 838mm.

Should the body get anywhere near jutting rocks or gravelly ledges, some heavy duty running boards have been added to the sills and a set of skid plates to its underside.

The suspension hasn’t simply been given some longer springs, though, the car’s entire chassis and drivetrain have been reworked to improve the Super Duty’s off-road capabilities. A huge twin-tube damper can be found at each corner. They have been tuned to be soft at low speeds and hold a vast amount of oil each so the fluid temperature stays low even when they’re working hard over rough ground.

The rear anti-roll bar has been re-tuned to work with the softer set-up, while the springs in the Tremor pack are progressive so that the Super Duty’s ability to tow and carry heavy loads is hardly affected.

Once you’ve improved the tyres and suspension, the next off-road must is locking differentials. The rear diff in the Tremor package has an electronically controlled locking mechanism that can be activated while on the move, and the front axle is fitted with a limited-slip diff.

As well as all that proper hardware, the Tremor pack comes with a new ‘rock crawl’ driving mode and Trail Control, Ford’s off-road cruise control.

Ford hasn’t released power and, more importantly for a vehicle like this, torque figures for the new F-series Super Duty yet. However, the old, smaller petrol V8 in the previous generation model made 385bhp and 430lb ft. The diesel engine has been carried over with a few improvements, and that used to produce 450bhp and 935lb ft of torque.

Add all the kit that comes with the Tremor package to figures that are likely to be even more impressive than the old model’s, as well as the sheer size of the thing, and the F-series Super Duty Tremor could be the most versatile and capable pick-up on the market. 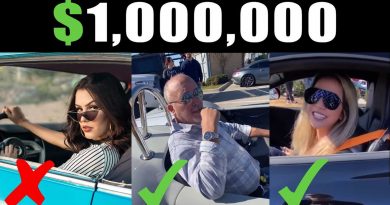 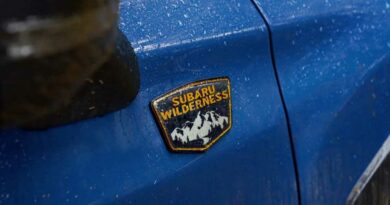