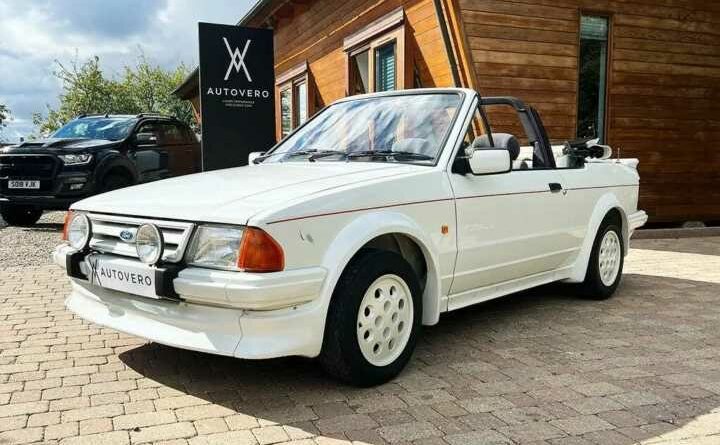 Before Christmas – oh my, it already seems like such a long time ago, doesn’t it? – I wrote about a 911 Carrera 3.2 Cab in Guards red. The overriding theme was the 1980s and that ‘it doesn’t get more ‘80s than this’. Well, as is often the case when I stick my neck out and go definitive, I am proven wrong not long after. You can get more ‘80s, as it turns out, because just feast your peepers on this. But before you do, my advice is stick on a set of sunglasses, because it’s quite bright.

It turns out the definitive 1980s car isn’t red, it’s white. An all-white, 1985 Ford Escort Cabriolet SE. White body, white hood, white tonneau cover, white wheels, white grille, white bumpers, white mirrors… Are you getting the gist? It’s white. The only thing it’s missing are white furry dice and those white plastic aerofoils people used to stick on windscreen wipers – remember them? And if anyone wants to start a thread on whether they were effective or not, sadly, I’d be keen to know.

Anyway, back to this ‘Scort’. As the advert says, this car is original. To the degree that the vendor claims it’s never been painted or welded (hence the odd blemish), and even comes with its original tyres. I can’t vouch for that side of things, but I can tell you that the claim it’s in factory-fresh spec is true. I’ve just done a quick bit of research and found a brochure online detailing the car (one is included with this car as it happens), and everything in the brochure matches with the car you see here: from the factory RS body kit and twin driving lamps to those ‘pepper pot’ plastic wheel covers. Oddly, the black fuel filler cap as well – they really should’ve thought to paint that white, I reckon.

The brochure also enlightens us as to why this car, which officially is called the Ford Escort Cabriolet ‘Special Edition’, is also known as the ‘Christmas Edition’. It’s because the brochure was titled ‘Here’s hoping for a white Christmas’ and it was dated November 1985. An odd time to launch a drop top, you could argue. Or looking at it another way, a great time to boost sales of a seasonal car by offering something a bit jazzy. By which I mean very jazzy – jazzier than Glenn Miller in session at Ronnie Scott’s.

If I need to explain the root of its other colloquial name, the ‘White Edition’, then I hope you’re sat down because I have some startling news: you are an amoeba. But well done for reading this far; the good news is that in amoeba terms, that puts you in the top one per cent.

The opening line of the brochure says ‘Exciting, elegant, powerful’. Really? I feel there’s some poetic licence being employed there. It goes on to say that Britain’s best-selling convertible ‘Now comes [in] a very exclusive ‘special edition’ Cabriolet whose wide-ranging attractions include some of the eye-catching features previously reserved for the sensational (yes, I am still quoting verbatim), ultra-high performance (hmm) Escort RS Turbo.’ It also claims, ‘This combination will take the exceptional Cabriolet to the forefront of the ‘collectible’ category.’ Proof there that it’s not a new thing for manufacturers to build cars and sell them as future classics.

There are plenty of other classic lines as well. Lines like ‘sizzling performance’ and ‘rides on tenacious 185/60HR14 low-profile tyres,’ and I do love looking at old brochures and being reminded of the simplicity of the past. Like the fact that here, Ford points out the ‘impressive list of standard equipment’ that includes such decadence as a carpeted boot, multi-function quartz (yes, quartz) digital clock and a lockable glovebox. Wonderful stuff. And from the sublime to the strange, because there’s one bit that explains ‘Mechanical and aerodynamic efficiency is optimised by the Cabriolet’s 10.5-gallon fuel tank.’ There’s a top tip for Adrian Newey, so I do hope he’s reading.

I am being flippant, but it comes from a good place. This car is one that truly stands out anyway, but after being inspired to delve into the brochure and remind myself of the joys of the 1980s and a simpler time has really alleviated the January blues. I hope it does the same for you, too. 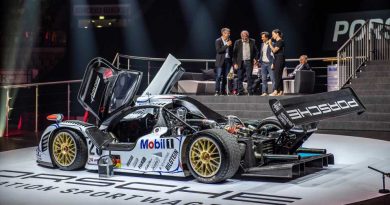 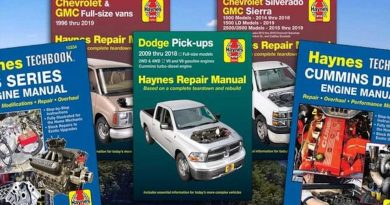