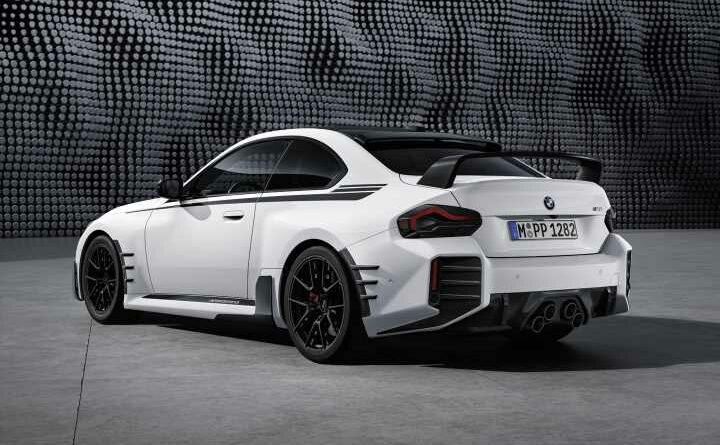 It doesn’t take much searching of used BMW M2s to find one modified to some extent. Be it more power, tweaked suspension or a new look, the old F87 lent itself well to some optimisation. It should be no surprise, then, that BMW has extended its range of M Performance Parts for the latest G87 M2. All the bits will be available from launch, which is currently scheduled for April, and promise ‘extra touches of rich emotionality to the design of the new BMW M2’…

But we’ll start with what sounds of most PH interest, the titanium M Performance silencer system. There isn’t any claimed performance advantage, though using titanium saves eight kilos and promises ‘a particularly exhilarating note reminiscent of a racing car’ when in Sport and Sport+ modes. Let’s hope they don’t trigger the noise cameras, eh? As with the recently announced M Performance Parts for the M3 Touring, the upgraded exhaust here does get the pipes oddly stacked in their own diffuser arrangement. Just in case there wasn’t enough to look at back there! Still, more straight six howl from that S58 3.0-litre sounds like good news, assuming the overrun pops aren’t too silly of course.

Additionally, new M2 buyers will be able to opt for height adjustable M performance suspension. Though the ride height can only go down another 10mm, BMW is promising ‘a far more direct connection between the body and road surface from the upgrade.’ Quite what this will do for the ride – given an M4 is already tense enough in its comfort mode – isn’t clear, though the suspension is said to offer ‘track-inspired driving dynamics on everyday journeys’. So don’t say you weren’t warned. Perhaps opting for the forged wheels could mitigate the additional firmness, and the gold cross-spokes do look great. They are 20-inch front and 21-inch rear, however, which seems like lunacy for an M2. And makes kerbs seem even scarier. Those who want to save their forged wheels for best might be interested in M Performance tyre bags.

It’s the M2’s exterior upgrades, though, that are likely to attract the most attention. Naturally, they’re all in carbon – ‘accentuating its racing aura’ – with M Performance Parts available from front to back. See the front splitter, intakes, side skirts, side spats, mirror caps, spoiler and diffuser. There’s even an M Performance tow strap, antenna cover, carbon filler cap and set of door pins available, for those who bleed blue, purple and red. Certainly the fully kitted out car delivers on the ‘high-impact design’ promised by BMW, and in white there is a motorsport attitude to it with the lower right height and rear spoiler, but it’s surely going to take a committed customer to go for the full kit and kaboodle. Let’s wait and see.

The M Performance touch extends inside as well, with a lot of what might be expected: extra carbon, Alcantara and aluminium. There are a few worthwhile touches, though. ‘Alcantara M Performance knee pads’ sound silly, but anyone who’s spent a day on track smashing a knee against a very hard dash will appreciate the concession. Note as well the M Performance steering wheel Pro, potentially even thicker than standard but ‘ideal for cornering with supreme precision’, the carbon door sills that ‘provide the ideal transition between the dynamism of the BMW M2 exterior and the sports car flair of its cabin’ plus, of course, the floor mats. If you want to make an entrance, M Performance Parts on an M2 is certainly going to do it.

Though prices for the parts haven’t yet been announced, they won’t be cheap – carbon mirror caps on an M3 are £1,400. But, well, the popularity can’t be in question, or surely BMW wouldn’t keep making them. And don’t pretend like you wouldn’t be a bit tempted by the gold wheels, at least… 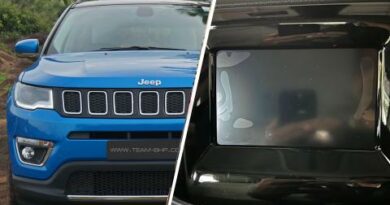 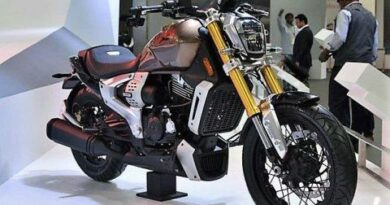 TVS to launch a new motorcycle in India on July 6

Upgraded from a Polo to a Nexon EV Max: Impressions & observations