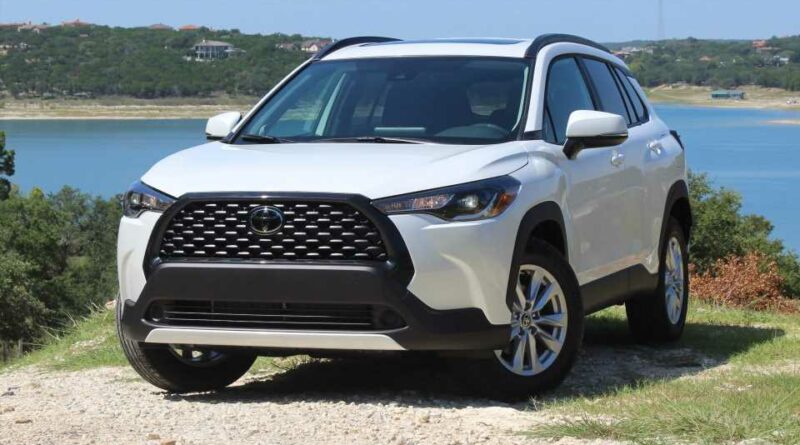 The Toyota RAV4 is the most car most people will ever need. It’s the right size inside and out, there’s a variety of drivetrains for a huge range of prices and uses cases, it makes a lot of sense for a lot of people and as a result, it’s one of the best selling vehicles in the country. If you want something smaller with similar capability there’s always the sub-compact CH-R, but for many, that’s just not big enough and don’t forget, AWD is a must.

That’s right where the new Corolla Cross…crossover comes in. In a more just world it would be a lifted Corolla wagon with All-Trac badging on it, but we’re working with the timeline we’ve got. It’s on the same basic platform as the Corolla sedan/hatchback, except it has plenty of ground clearance, AWD, and seating for five people plus a bit of luggage. It’s like a RAV4, but smaller and meant to be a bit more exciting, with a front end that kind of mimics the 4Runner. “Is that a RAV4?” They will ask. “No,“ you can respond, smugly, “It’s a Corolla Cross.” See how much more fun that is? I’m having a great time already. 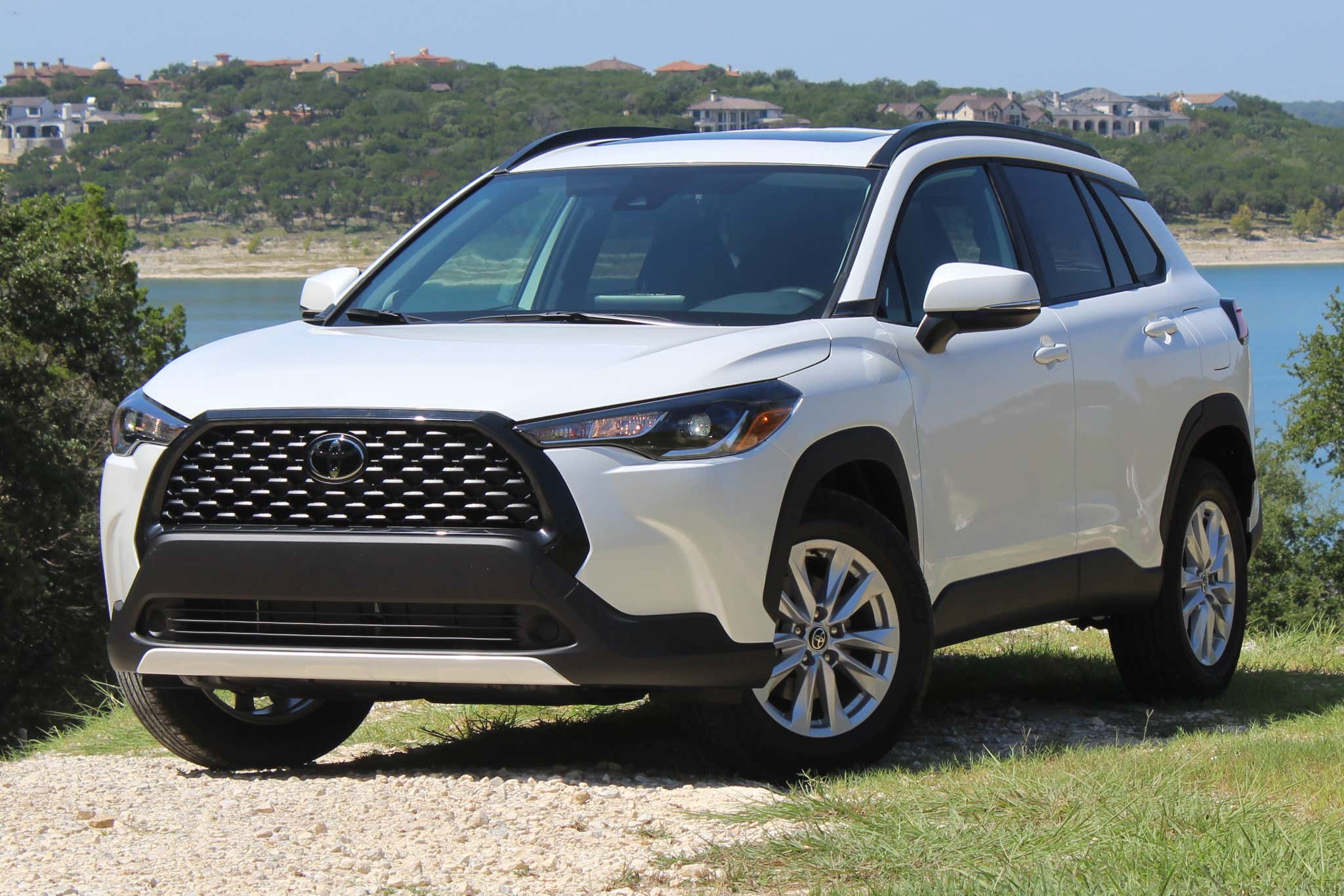 2022 Toyota Corolla Cross: By the Numbers

We’ve established that the Toyota Corolla Cross is smaller than the RAV4, slotting in between it and the CH-R. Really, it’s closer in attitude to the former. The Corolla Cross is three inches taller and longer than Toyota’s smallest crossover, but most importantly it rides a full two inches higher off the ground—8.2 inches for most trims—which is very close to a regular RAV4. This is despite the Corolla Cross being a whole five inches shorter in length and almost three inches shorter in height than in the RAV4, meaning it’s a more compact package all around. 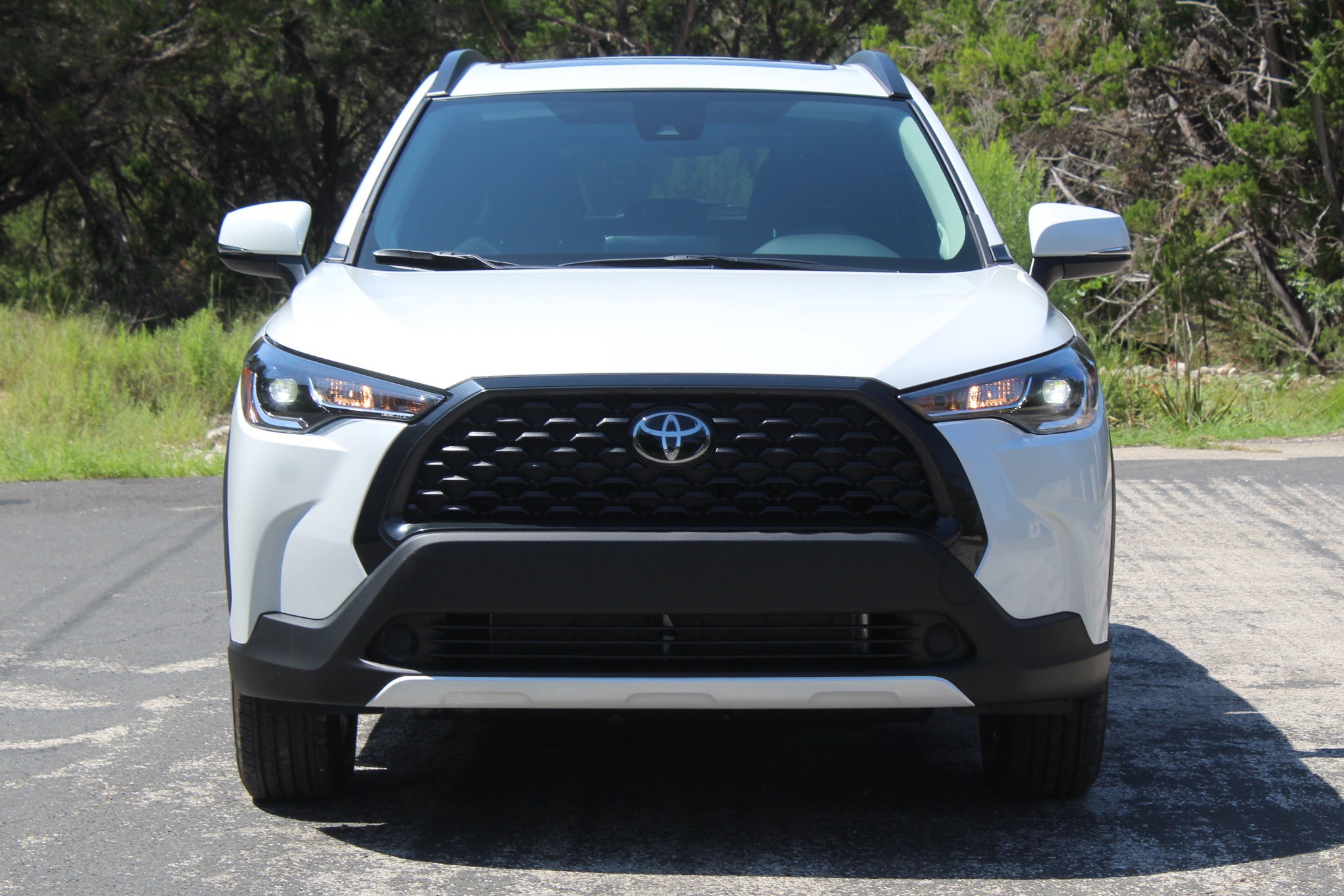 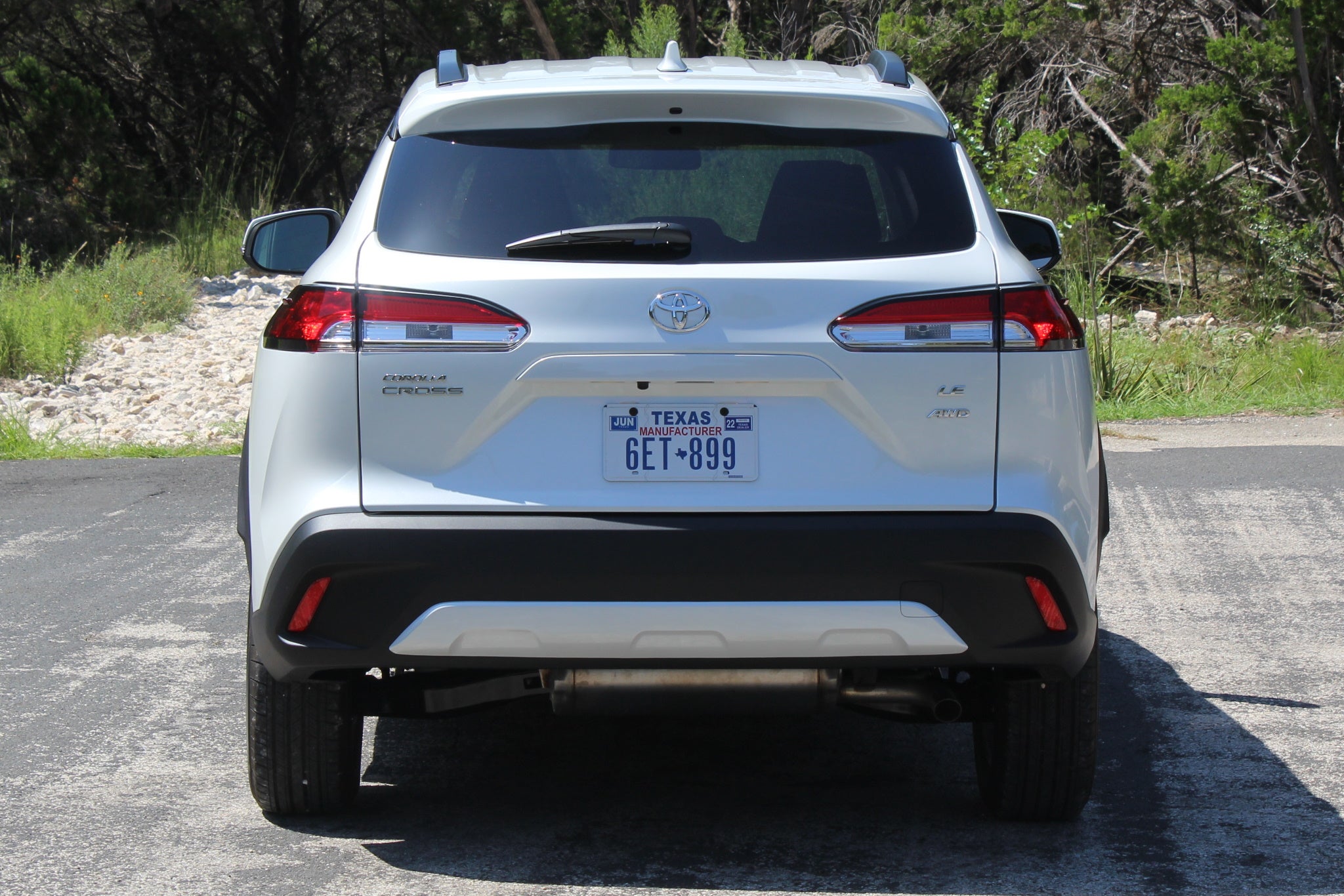 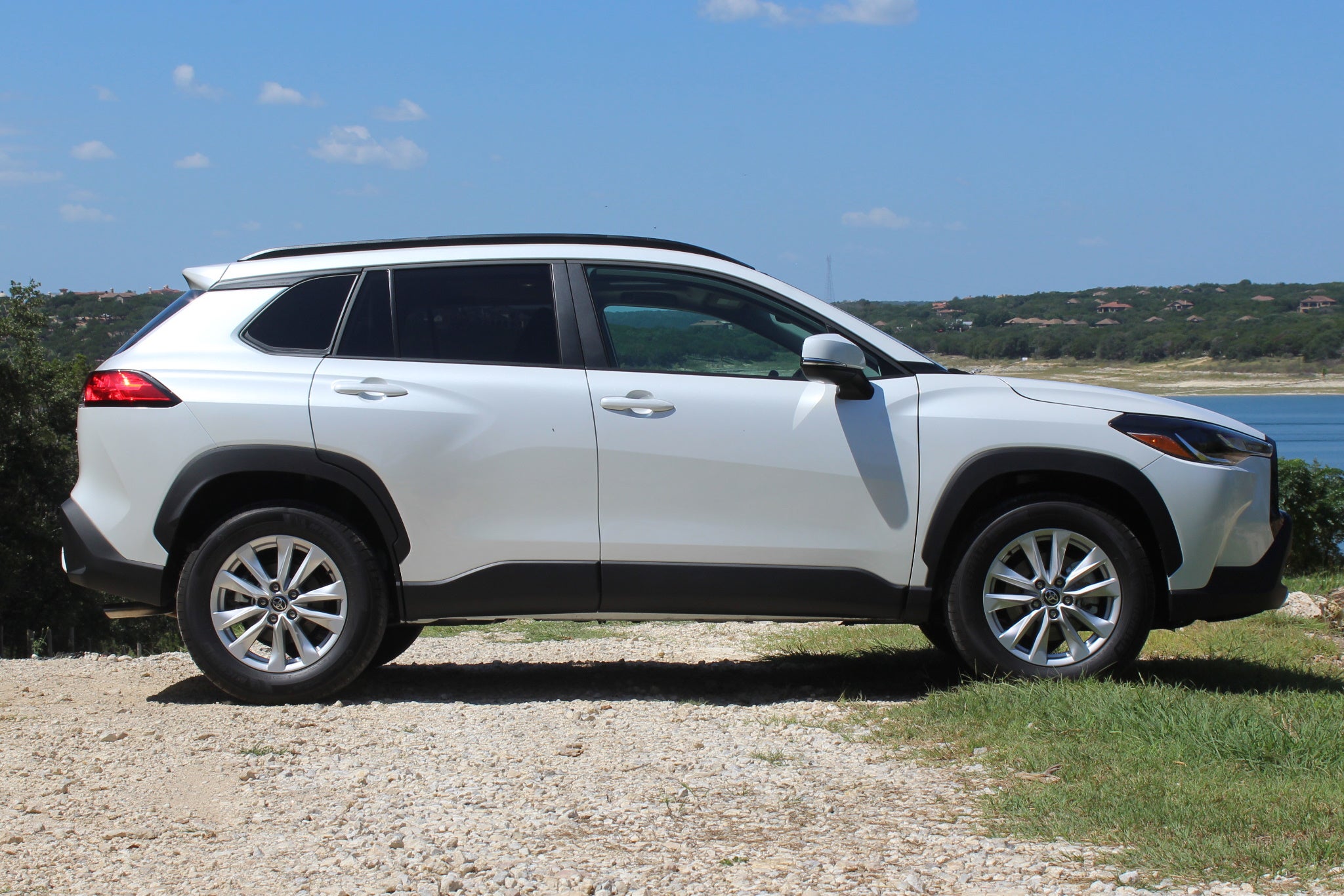 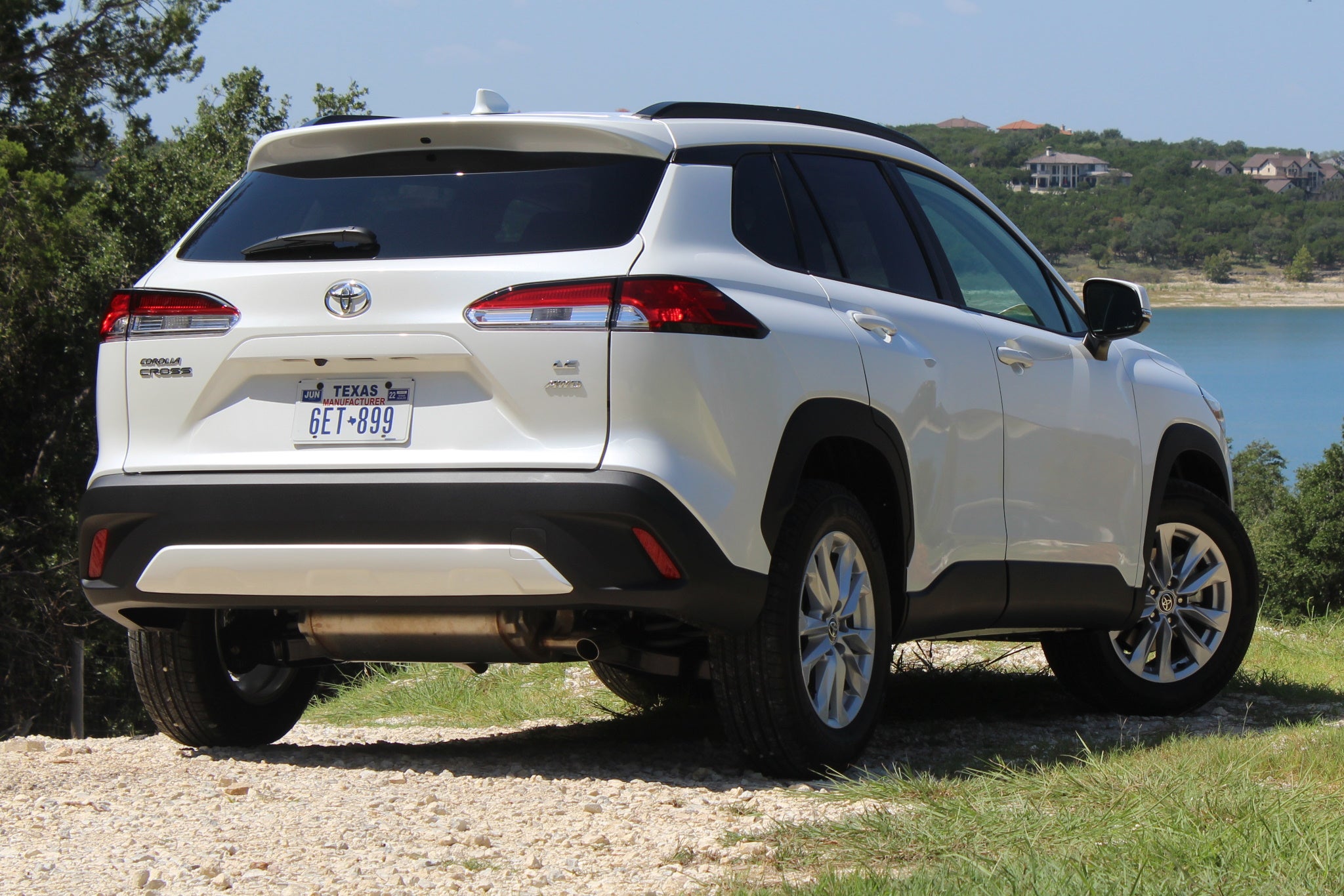 To add a little more color beyond these dimensions, AWD is available on every Corolla Cross trim, even the base, for another $1,300. The storage space is also smaller than the RAV4, but still respectable: 26.5 cubic feet without the second row flattened, and around 66 cubic feet with it folded down. This is compared to the RAV4s 37.6 cubic feet and 69.8 cubic feet, respectively.

I keep bringing up its bigger brother, but the truth is this the Corolla Cross fashions itself as a cheaper, smaller, but equally capable crossover to the RAV4. It’s for tighter spaces, tighter budgets, but similar prospects. 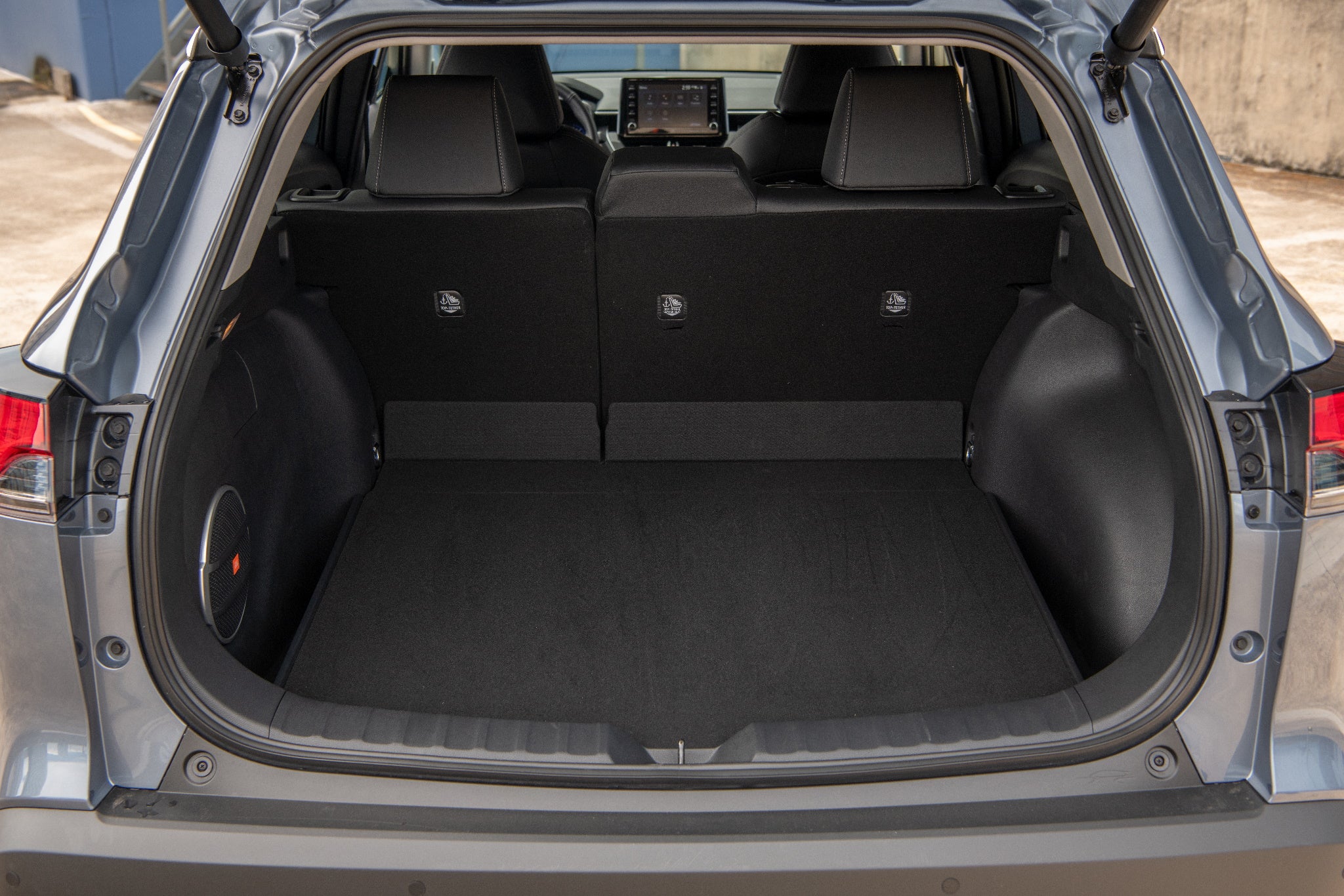 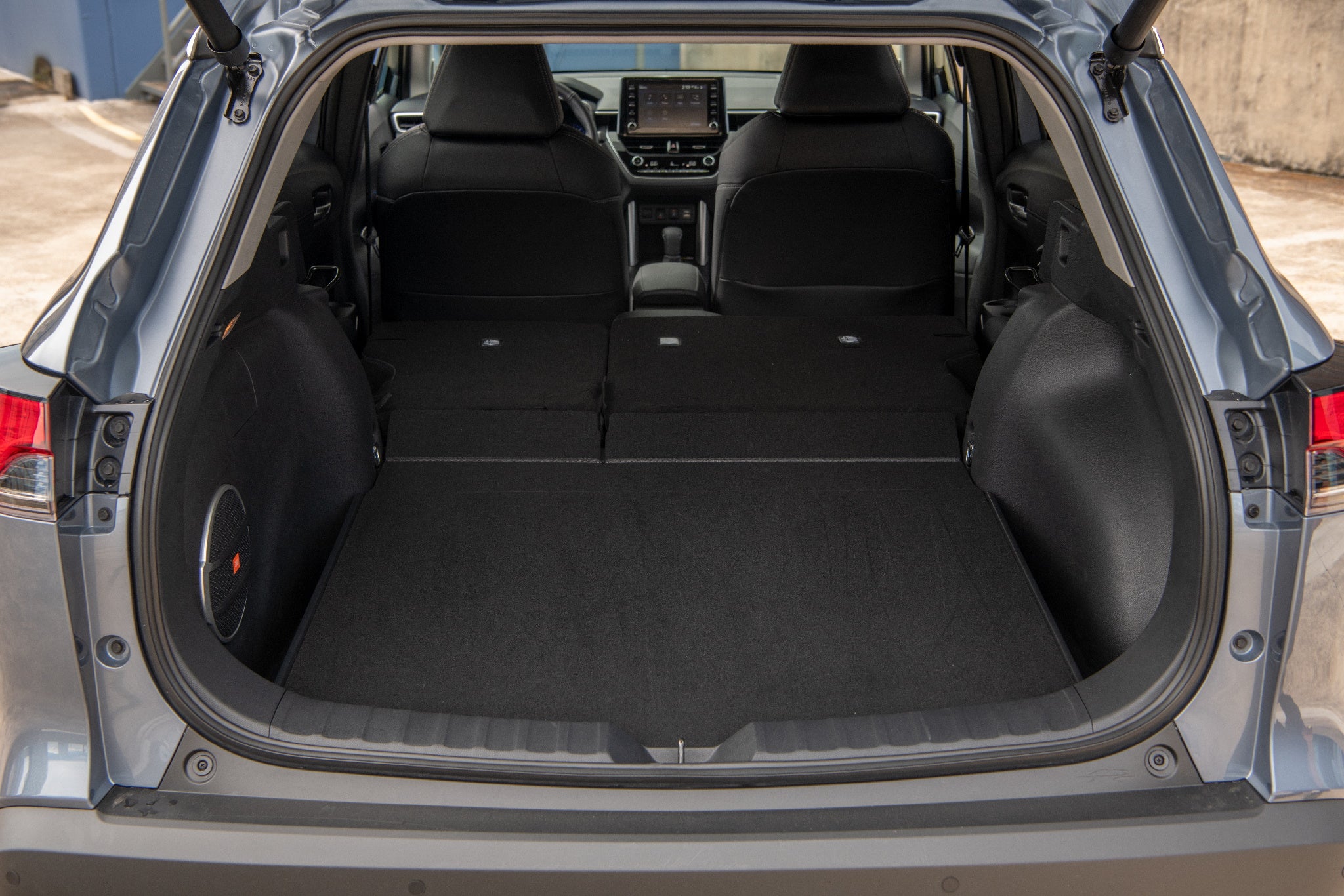 In a lot of ways, this car is really a nice blank canvas to build on, but it perhaps falls short of a real “active lifestyle” vehicle. In reality, it just fits well into a lot of folks’ lives. The three trims from lowest to highest are L (the base car), LE, and XLE. As previously mentioned, all of them can be had with AWD, and the L gets a fair amount of standard equipment. Apple Car Play and Android Auto are both included, as is radar cruise control and USB charging ports. Rear passengers get HVAC vents as well. That is about all the comfort they get unless you want to spend more money, though. 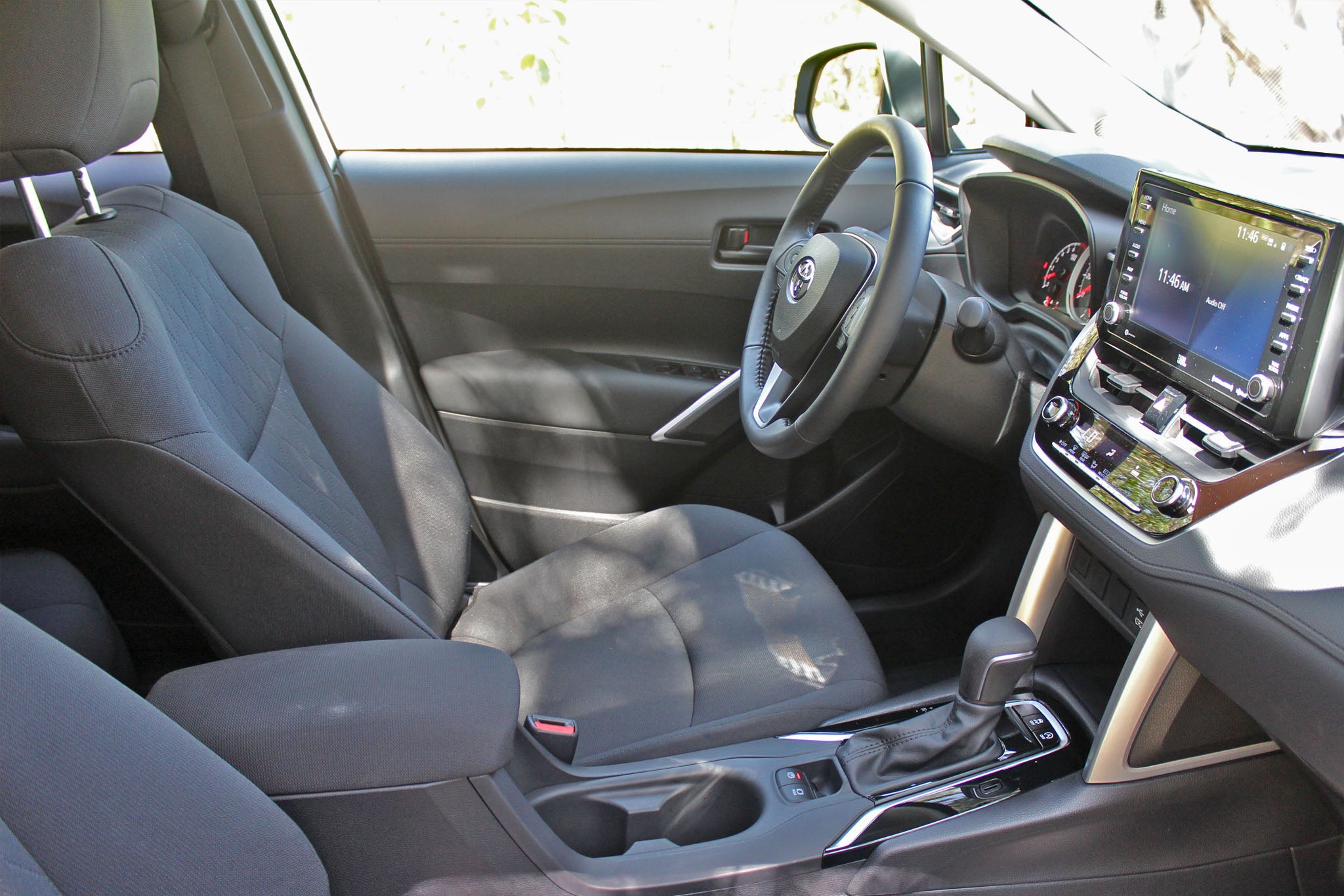 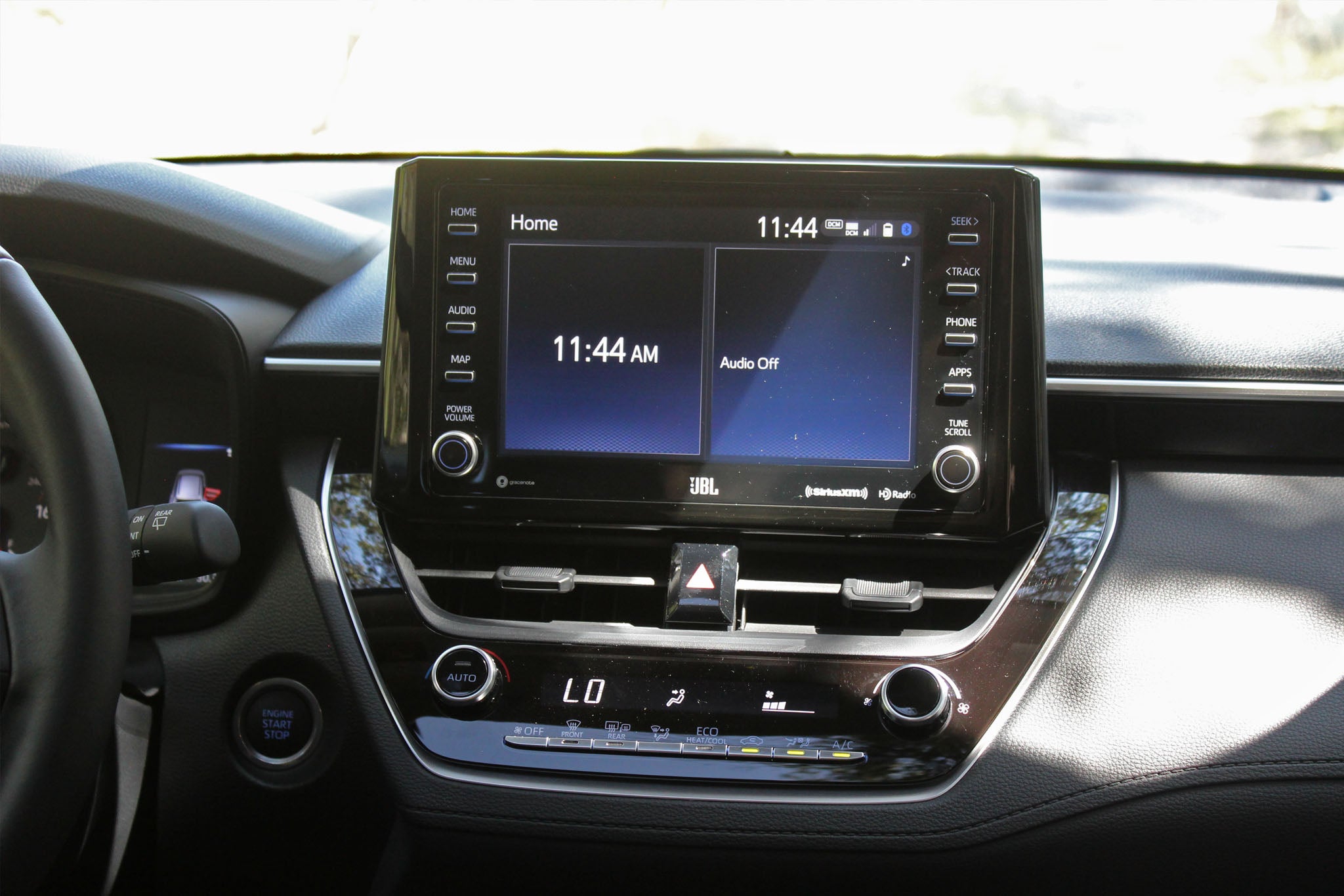 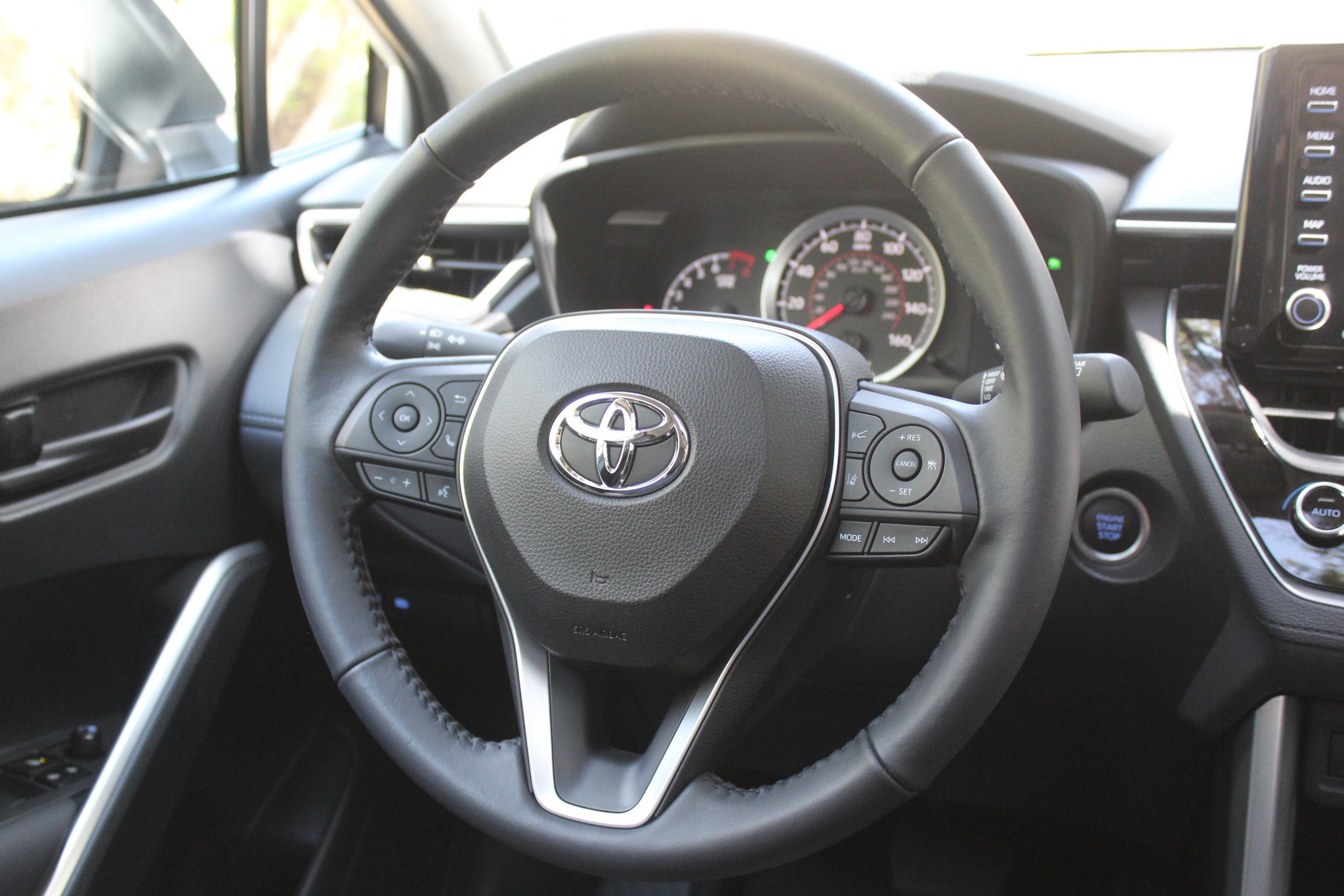 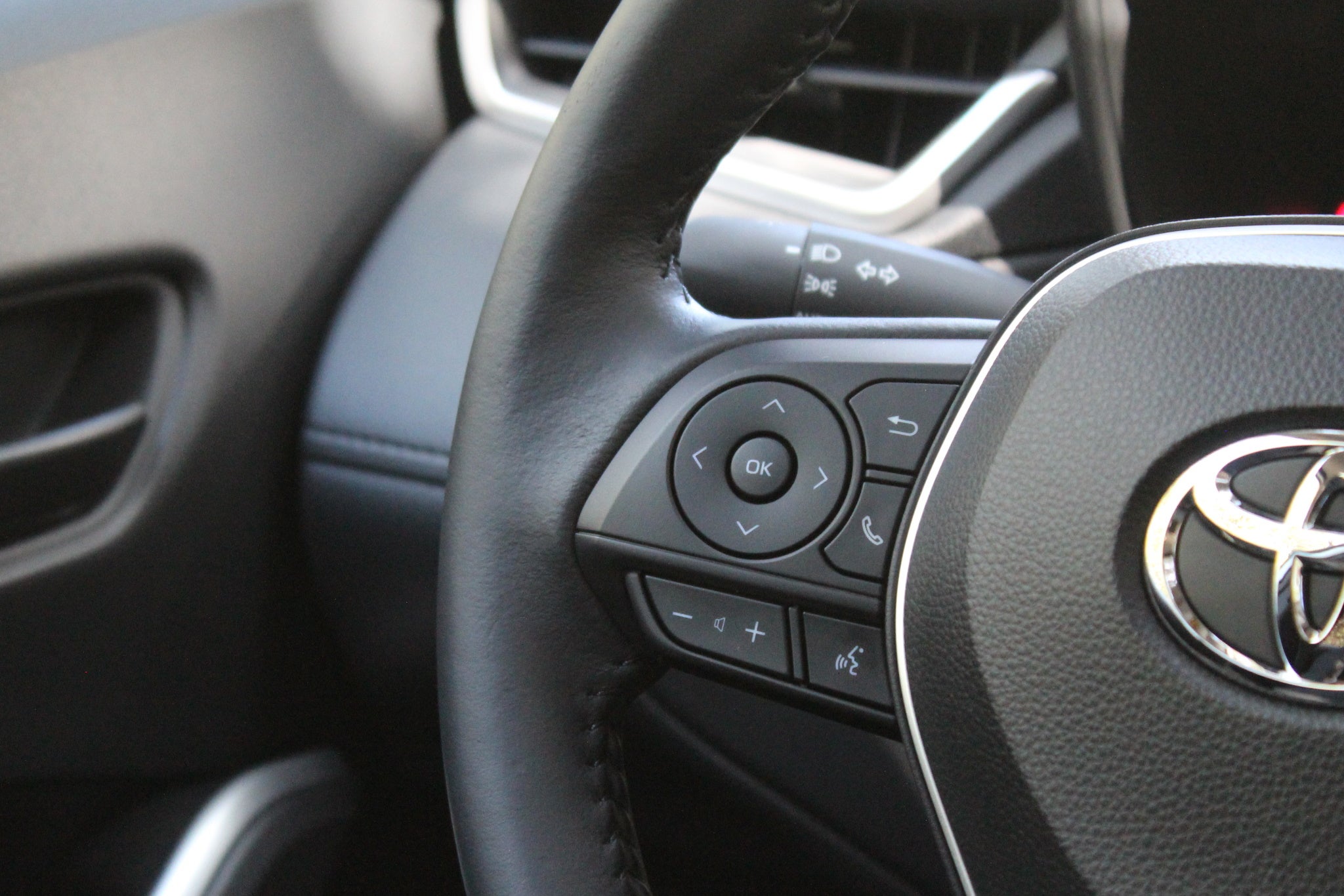 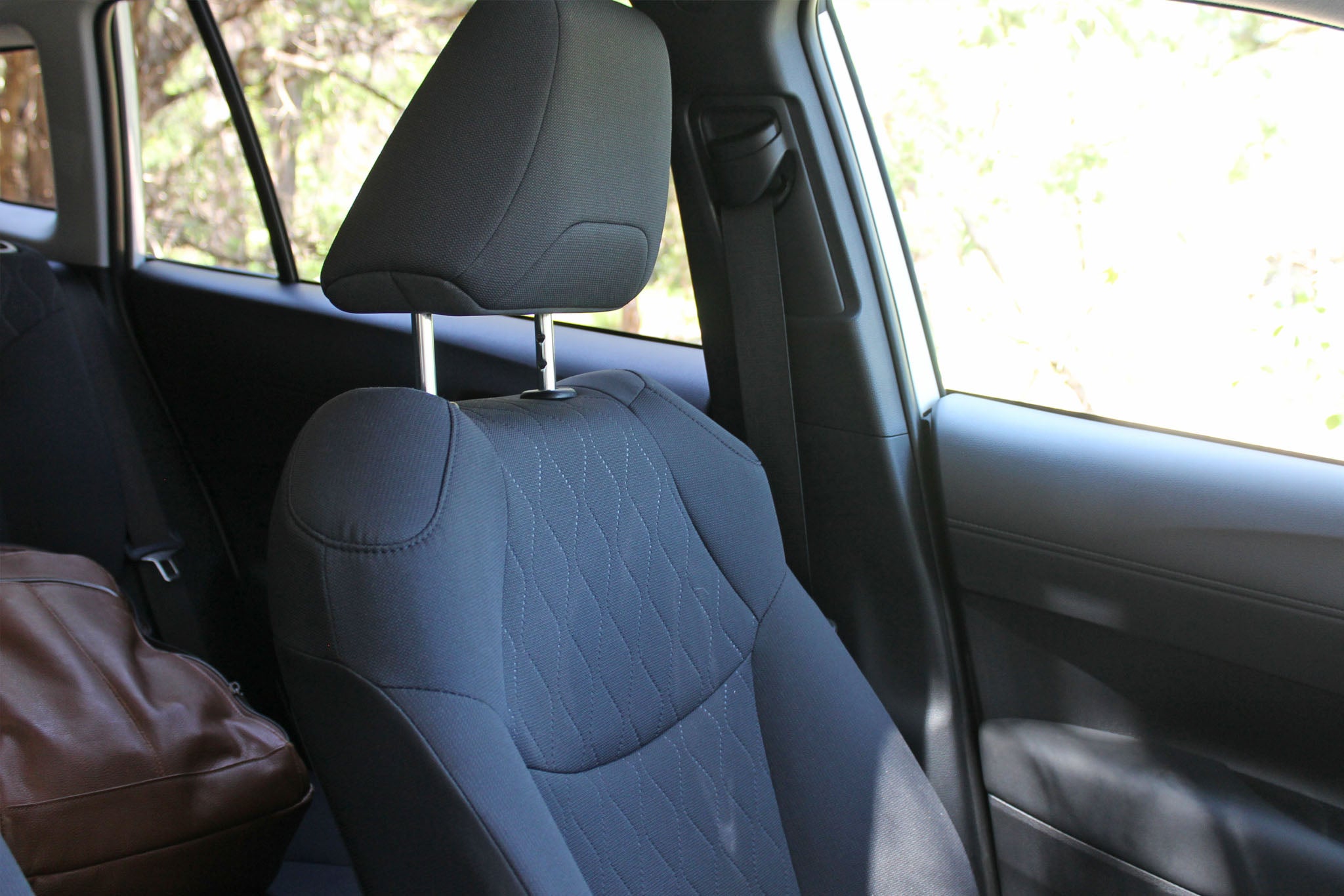 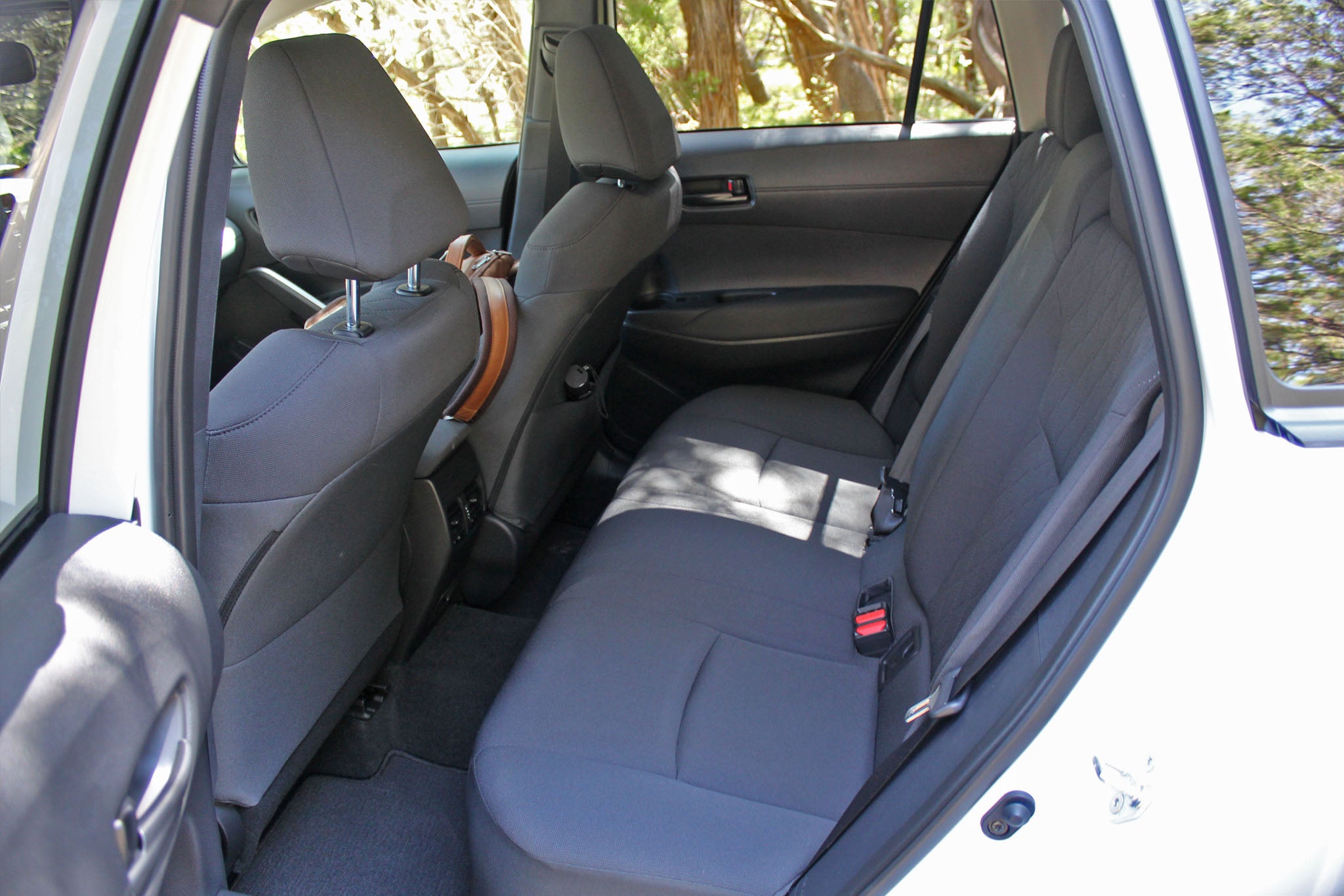 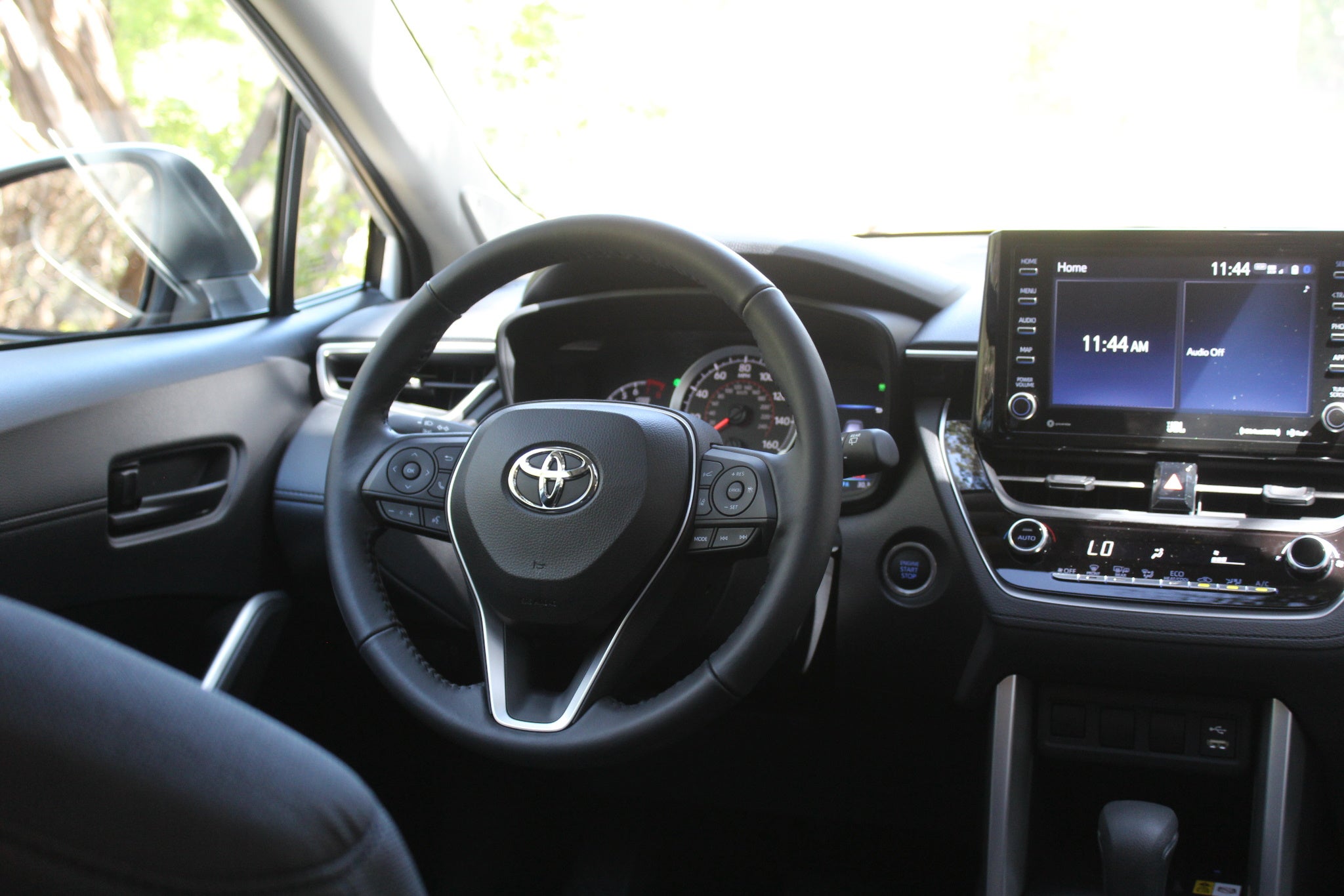 To avoid just listing these options out as you get higher in the trims, it’s simpler to note that the highest possible price for a Corolla Cross will be around $33,000 for a fully-loaded XLE with all-wheel drive. Every car below that, no matter the trim, is pretty much worth that price. The test car I drove, priced at $29,890, was a middle-of-the-road LE with a few options like a sunroof, premium speakers, and the only extra-cost color; Wind Chill Pearl. The only thing I was really missing was heated seats (XLE only), but Toyota puts enough options in the LE to lose sight of the base model. The important ones you’ll notice are automatic climate control, wireless charging as well as an extra USB port, and keyless entry. None of those things come on the L.

The top trim XLE starts at $27,450 for a front wheel-drive version. The bottom line is that the only way to get heated leather seats with electric adjustment is on the XLE. Seats on all the other trims are manual, unheated, and cloth. The XLE trim is also the only way to get dual-zone climate control and a rear center armrest with vital cupholders, so if you have kids or regularly carry people in the back, the XLE is the way to go.

There are definitely noticeable and important differences between the trims then, but one place where you will not find any variety is in the choice of drivetrains, at least, not yet. A hybrid option is on the way by 2023, but Toyota has not yet specified whether it would be a performance-boosting plug-in hybrid or just a Prius-style system with a small battery. It will be a nice option either way. This is the sort of car where there would really be no reason not to get it with a hybrid drivetrain outside of the extra cost.

Until then, Toyota’s 169-horsepower 2.0-liter four-cylinder drags every Corolla Cross down the road, even the highest trim cars. In AWD configuration, as much as 50 percent of torque can be sent rearward, enough to provide peace of mind in most light terrain/weather situations at the cost of two MPG combined. An acceptable tradeoff, especially considering the relatively small additional cost. 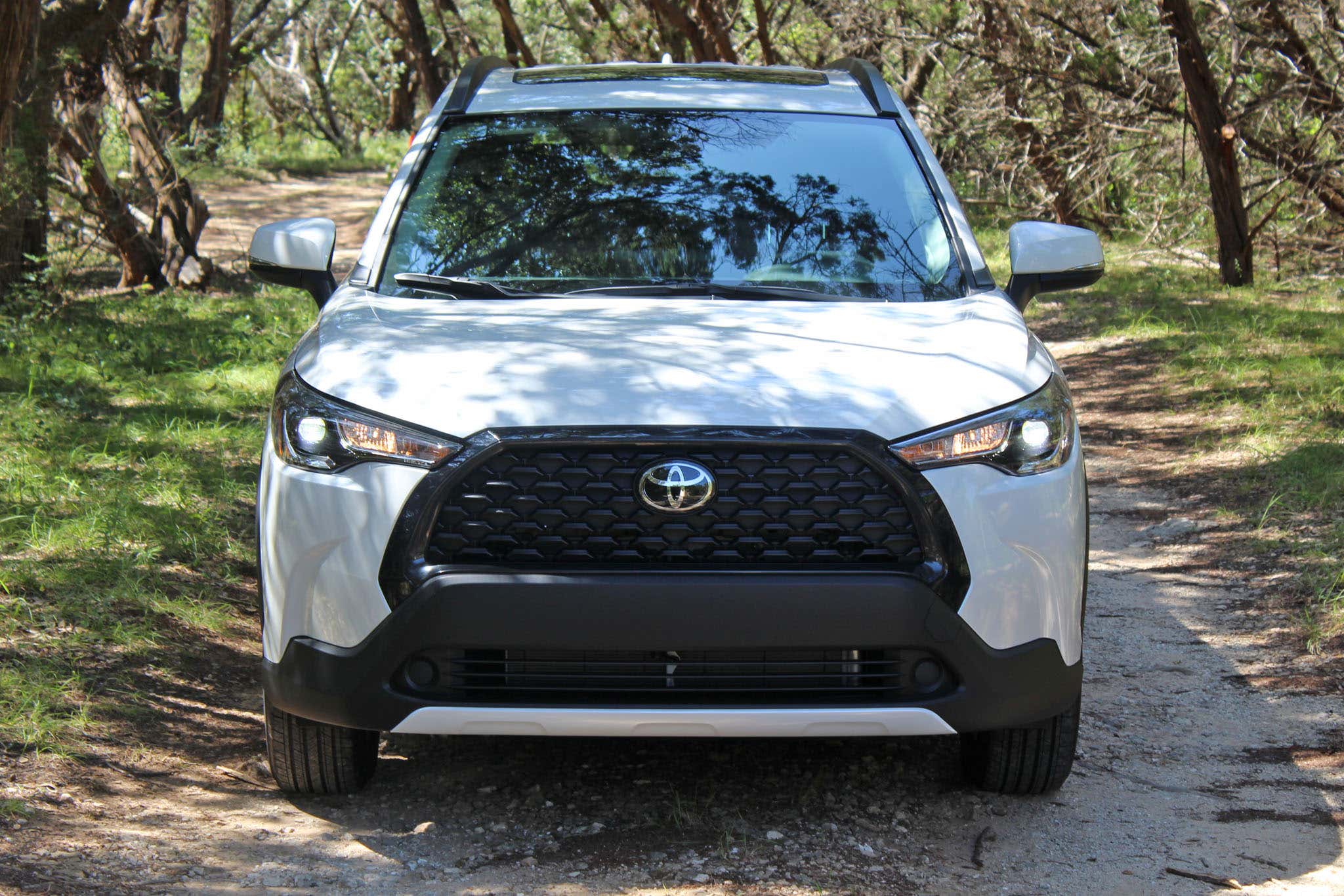 The Corolla Cross isn’t extremely slow, but it definitely isn’t fast, either. Its minuscule towing capacity of just 1,500 pounds is one that I wouldn’t want to test, let’s put it that way. A physical first gear in the constantly variable transmission helps provide lively starts, but the engine was always hunting around the rev range for more power when the road was anything but flat. The situation never got desperate—merging onto the highway was no problem—but a little more power would’ve been nice.

Besides that, the Corolla Cross had light steering and rode completely agreeably, with reasonably soft suspension but very little body roll. Potholes were met with a soft thump and rough roads were dealt with handily without any bounciness. There was never a speed bump I felt like I had to creep over, at all. In terms of highway driving, Toyota’s lane-following system—which it calls “lane tracing”—had the potential to add to this relaxed driving attitude, but unfortunately it didn’t work that well. With the click of a button, it turned on, locked onto my lane, and attempted to keep the crossover between the lines. It then swayed the car around a bit, got confused when lanes separated for things like entrance ramps or exits, and it really didn’t like even slight bends in the road. I turned it off, and didn’t turn it back on. The radar cruise control, on the other hand, worked very well and was easy to adjust on the steering wheel. 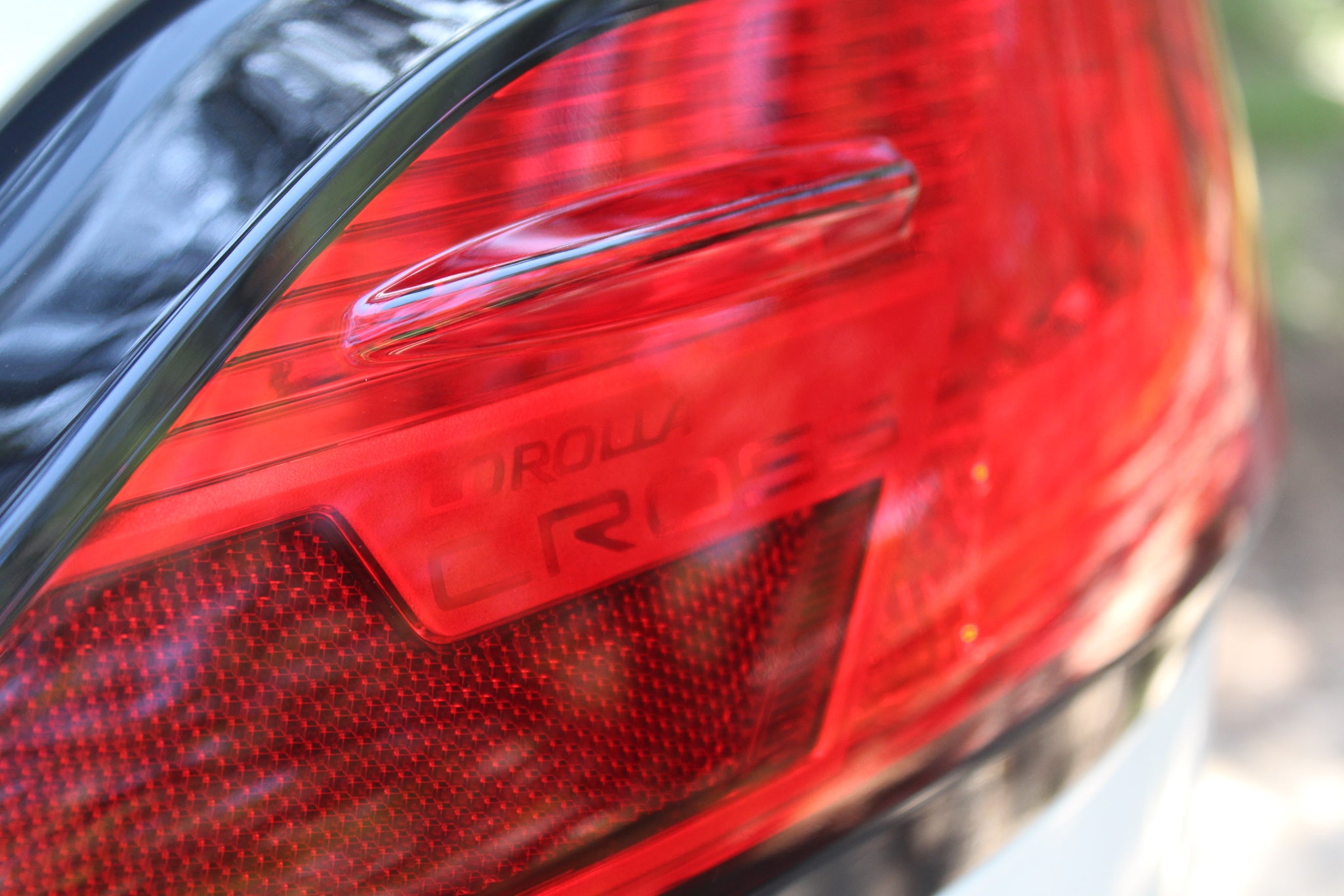 The steering-mounted controls were actually a high-point in this car, perhaps due to the fact that the rest of the interior just sort of blends into the background. The controls for media and driver aids are mounted on different levels to each other on the wheel, not just different buttons on the same surface. This helps mentally delineate them better than you might think. The pattern sewed into the cloth seats was the only other piece of noteworthy design in there, which is pretty typical Toyota. Everything feels fine and it’s definitely good quality stuff, there’s just not much going on.

It was quiet, comfortable, and definitely easy to handle, all at a lower price than the RAV4. In my experience driving it around the Austin, Texas area, it behaved very well. In the city it was easy to navigate through tighter areas, busy traffic, and drive-thrus. On backroads, it cornered acceptably and gave me more power when I wanted it. The Corolla Cross isn’t about spirited driving whatsoever, but we’re well past the point where an entry-level crossover is going to offend anyone behind the wheel. It handles as compliantly as any real buyer would want.

The only catch is really the cabin space, but it’s not a big issue. The rear legroom was a little tight for me, I’m around 5′ 10″, but headroom was more than adequate. Also, since this is a cheaper car—$4,155 cheaper than a base RAV4—nicer options like rear heated seats just aren’t available like they are on some nicer higher trims of this car’s big brother. That’s a drawback, sure, but definitely not a big one.

What some might consider its drawbacks—unmemorable driving dynamics, a sparse interior, limited choices—actually add up to its biggest strength. It may not look like it, but it is truly a Corolla. I mean that as a compliment! Not flashy, not particularly thrilling, but it’s a solid value, well-built and capable with fairly priced options. The promise of a Corolla is if you buy one of these, you’re undoubtedly making a good, sensible choice. That seems to be the case here. It may not be a true “adventure vehicle” like the Hyundai Santa Cruz, but that really doesn’t matter. It’s a Corolla, and not just in name only. 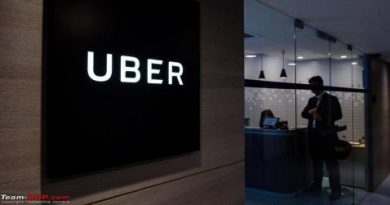 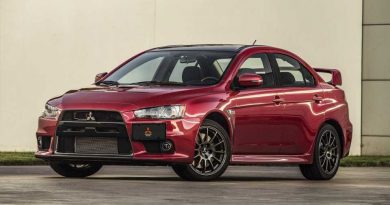