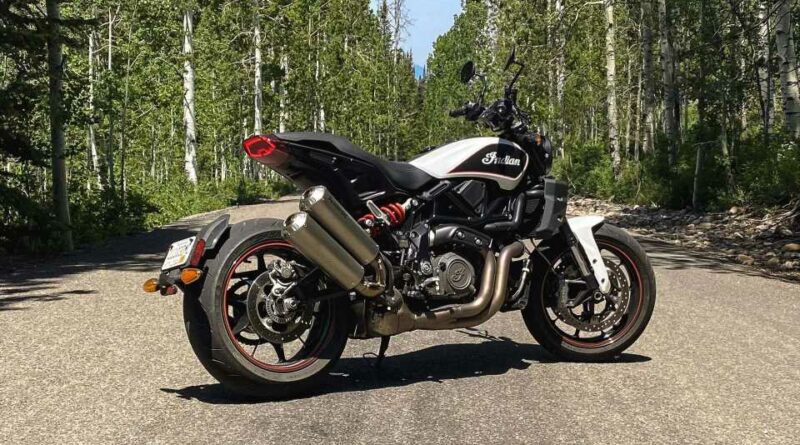 In what feels like 10 years ago, but was actually just two, I rode the then-new Indian Motorcycles FTR 1200. It was Indian’s first go at a bare-knuckle, naked street bike with influence from the brand’s flat tracker. It was, and still is, a very different proposition to the rest of the company’s cruiser lineup.

Scything through Las Vegas, I rode it down the Strip’s greasy tarmac, to Nellis Air Force base to watch F-22s launch, and out into the sparse terrain past Red Rock State Park. And I took it off-road, because the bike I had on loan came equipped with Dunlop’s flat-track tires, and man was it solid out there. I may have also allegedly popped a couple wheelies trying to impress one of The Drive’s old executives who was riding a Harley-Davidson Street Glide with me. 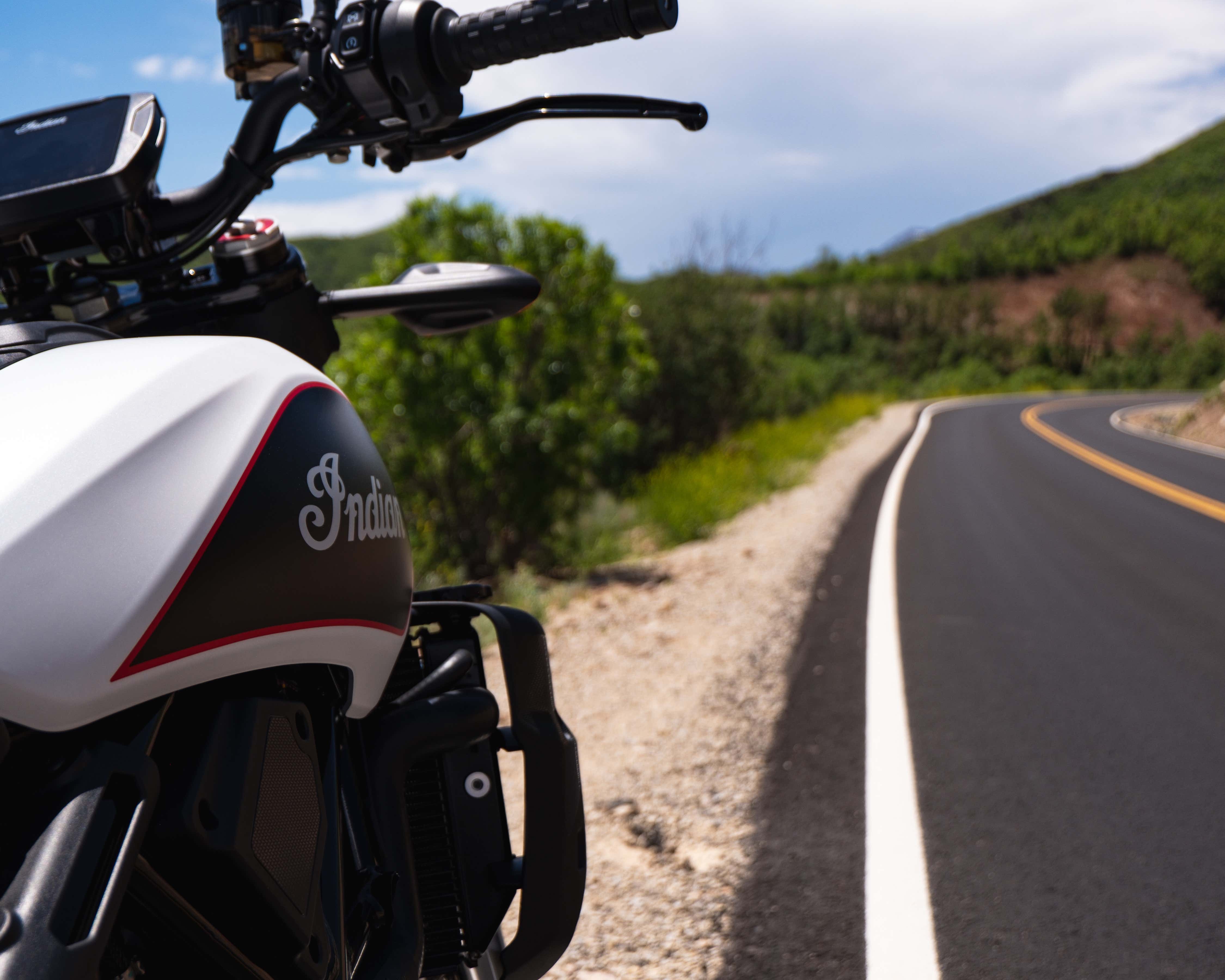 All in all, I came away impressed by the bike’s performance. The FTR 1200 S felt right. It felt like a revelation for that brand. Something new and exciting to compete with Ducati’s Streetfighter V4 S, KTM’s 1290 Super Duke R, and Yamaha’s MT-10. The fuel economy sucked, but with its $12,999 base price, it was an excellent addition to Indian’s lineup. Those qualities haven’t stopped Indian from updating the FTR for 2022, including a slight name change to make it more alluring to prospective buyers.

This time, I traded the Las Vegas desert for the roads around my new home in the mountains of northern Utah—arguably one of the most dynamic environments anywhere for testing a motorcycle. I tore through the Timpanogos, dove into valleys flanked by 10,000-ft summits, and set fire to one specific road that’d make all of SoCal’s resident racers jealous beyond belief. The 2022 FTR S was a great companion, though not without a weird quirk from an Ohlins-to-ZF-Sachs suspension switcheroo that stops it short of being as excellent as I remember. 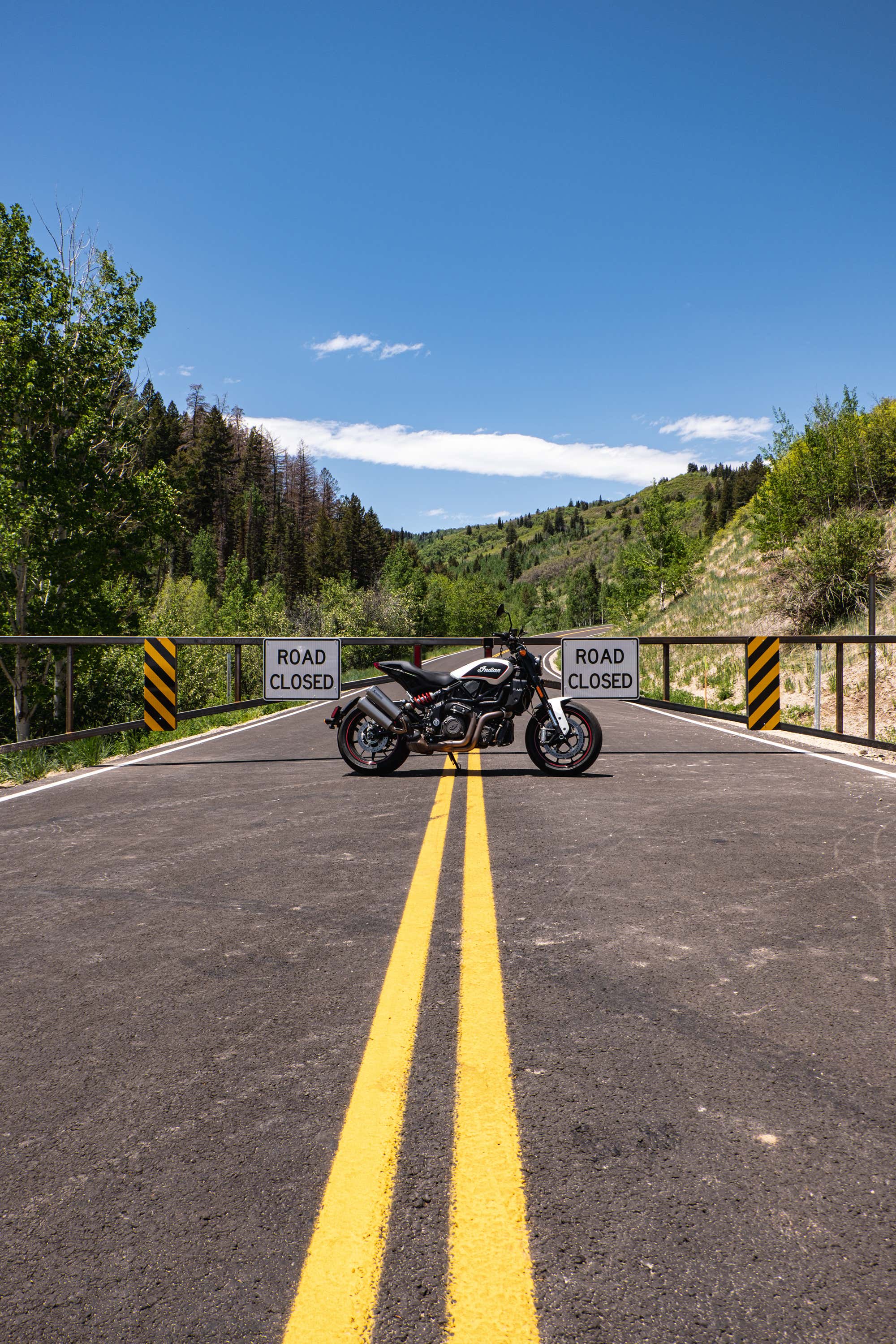 Refreshed and So Clean, Clean

Like I said, I loved my time with the original FTR 1200 S. The only thing I’d have changed would’ve been giving it a more frugal economy map to increase its real-world range. That, unfortunately, hasn’t happened, and a tank still only lasts about 89 to 100 miles pootling along. Getting onto the throttle of the 1,203cc V-twin, which has been detuned by three horsepower to just 120 hp, still rapidly reduces its range.

New for the 2022 model year, the FTR S gets smaller 17-inch cast-aluminum rims for greater access to aftermarket tires, a lower seat height (30.7 inches compared to the original 32 inches) for easier leg-over access, a revised 4.3-inch color TFT display, shorter handlebars for better handling, and new engine calibration that, according to Indian, “refines cold start performance, and delivers a smoother, more predictable throttle response.” The FTR S also comes with street Metzeler Sportec M9 RR tires, which are sport tires. Not the flat-track ones I originally tested the bike with. Purple mountains majesty and all that jazz. 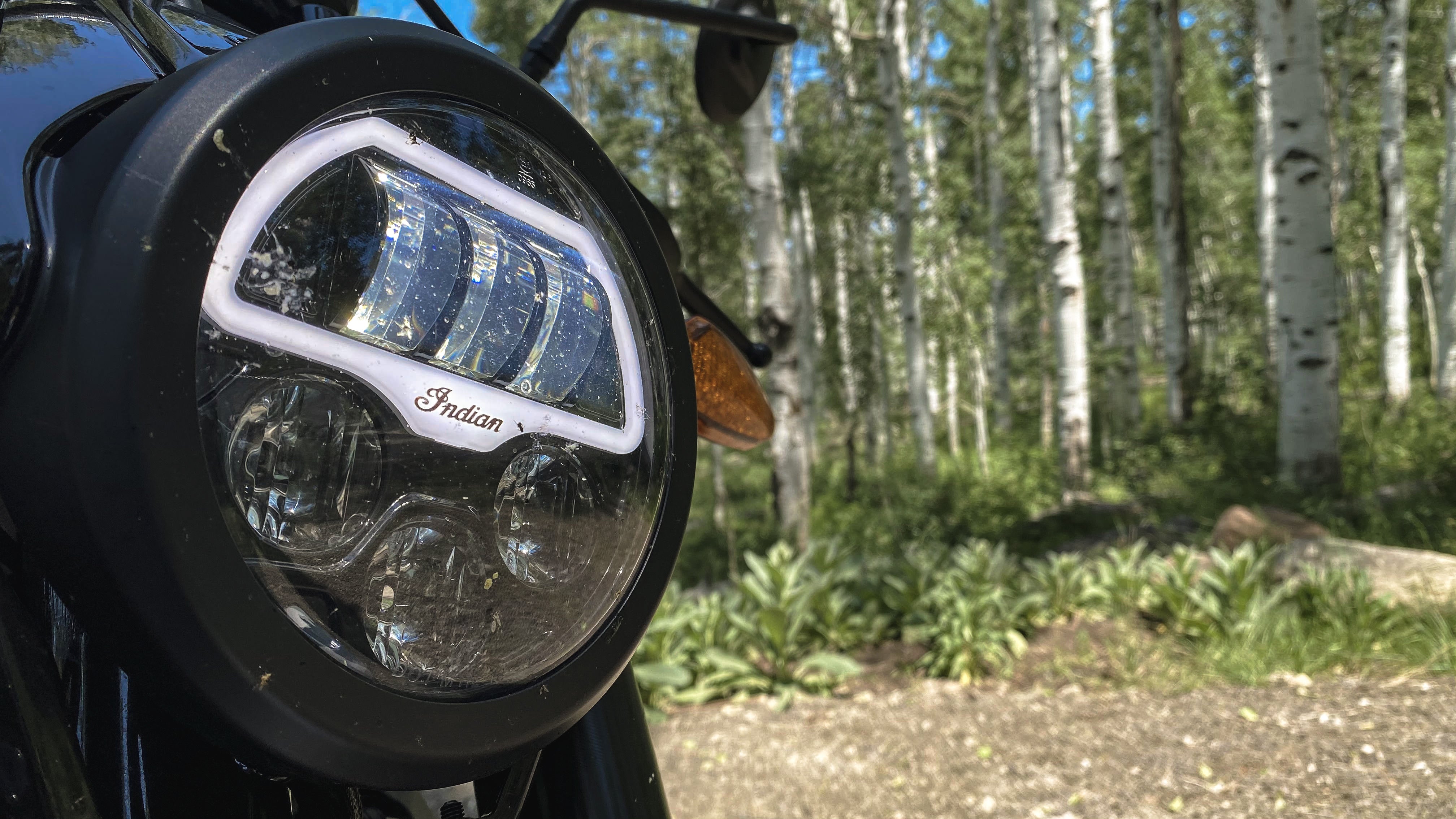 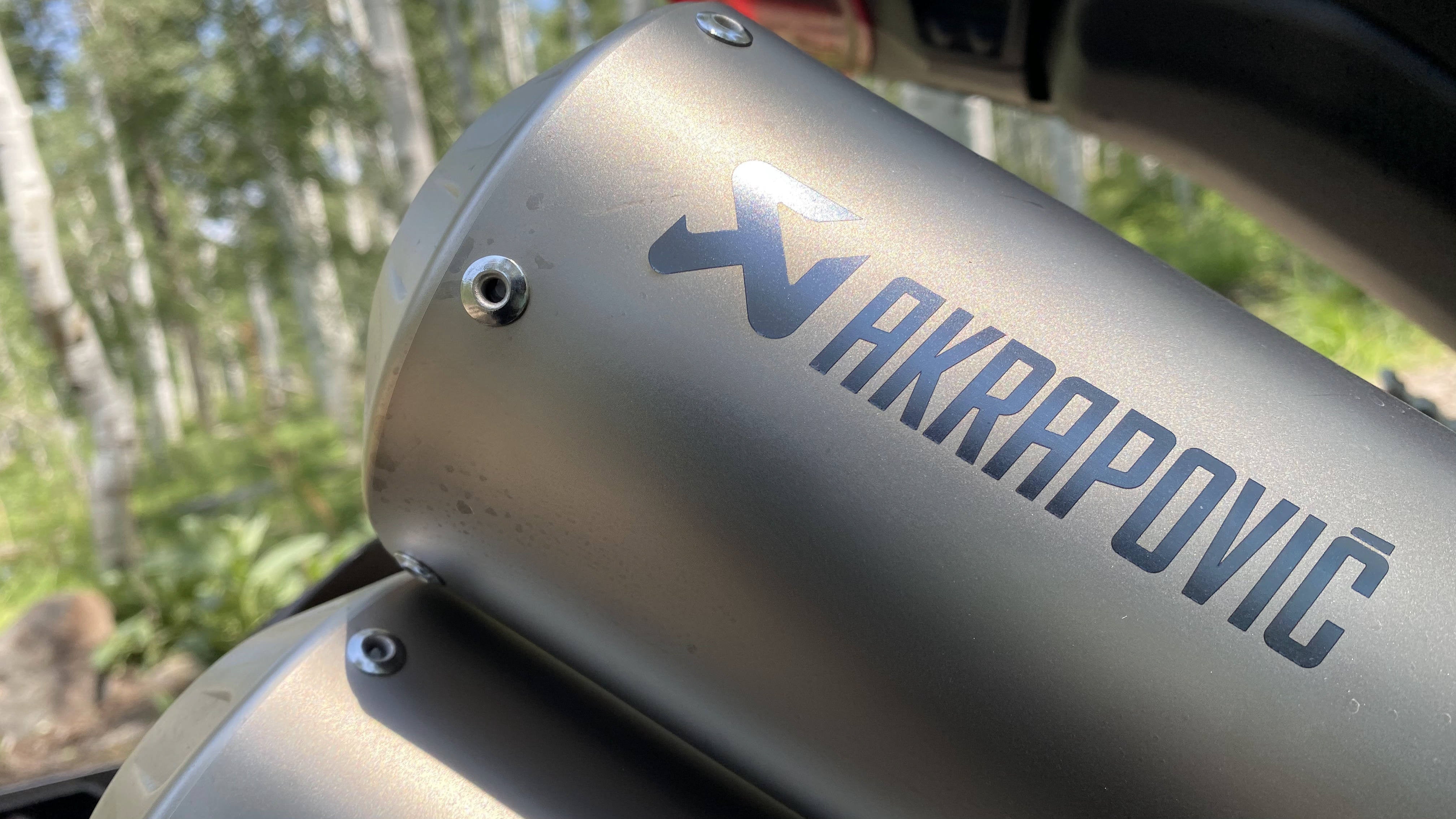 Indian also dropped “1200” out of the FTR’s naming scheme, instead opting for a base model FTR, the upgraded FTR S seen here, a top-spec FTR R Carbon, and a new horse in the stable: the FTR Rally, which offers a more scrambler style and knobby tires.

The rest of the motorcycle is mostly the same. Same Brembo brakes, same wheelbase, same rear suspension, same ride modes (Rain, Sport, Standard). That doesn’t seem like a vast array of changes or even changes that’d result in a wildly different motorcycle. Yet after spending the last month with it, I can confidently say that the FTR S is not the same motorcycle that made me giggle in the Nevada heat. 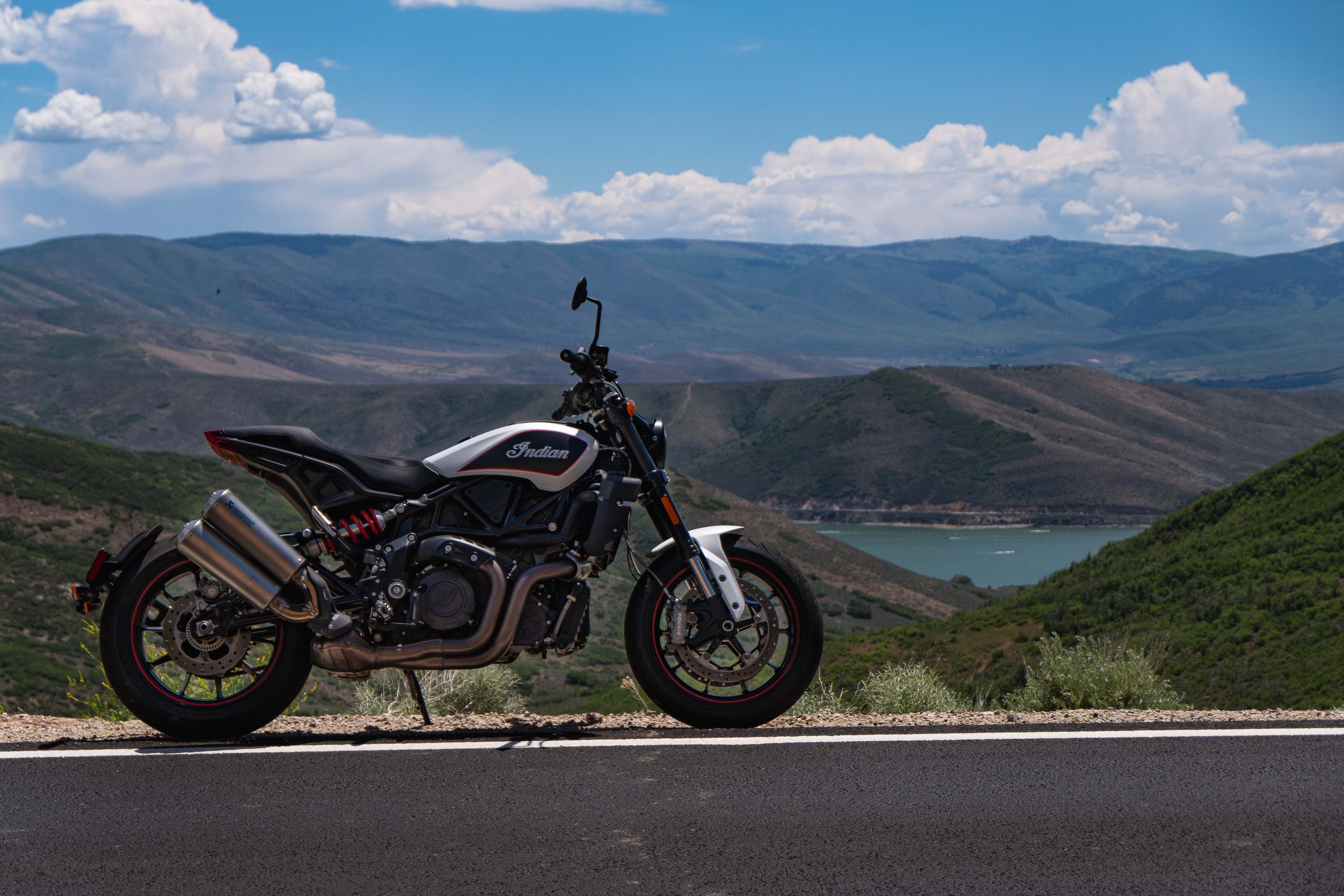 Few places are as beautiful as northern Utah.

I’ll qualify what I’m about to say with two items.

First, we only moved to Utah in February. Much of the area has been covered in a few feet of snow until quite recently, and I haven’t had the chance to learn these mountain roads in the same way as I learned Southern California’s or even Vegas’—I was in that accursed city far too many times to recall. I am a quick study, though, and given I’d already ridden an FTR, I felt confident in our combined capabilities when I threw my leg over the FTR S.

And second, the FTR S doesn’t have the Ohlins front suspension that the FTR 1200 S I originally tested had. Instead, it swaps those for ZF Sachs. While ZF isn’t Ohlins, these shocks are still known for being excellent.

And yet, there’s something wrong with the default settings of this motorcycle’s front end. Into the mountains I went. 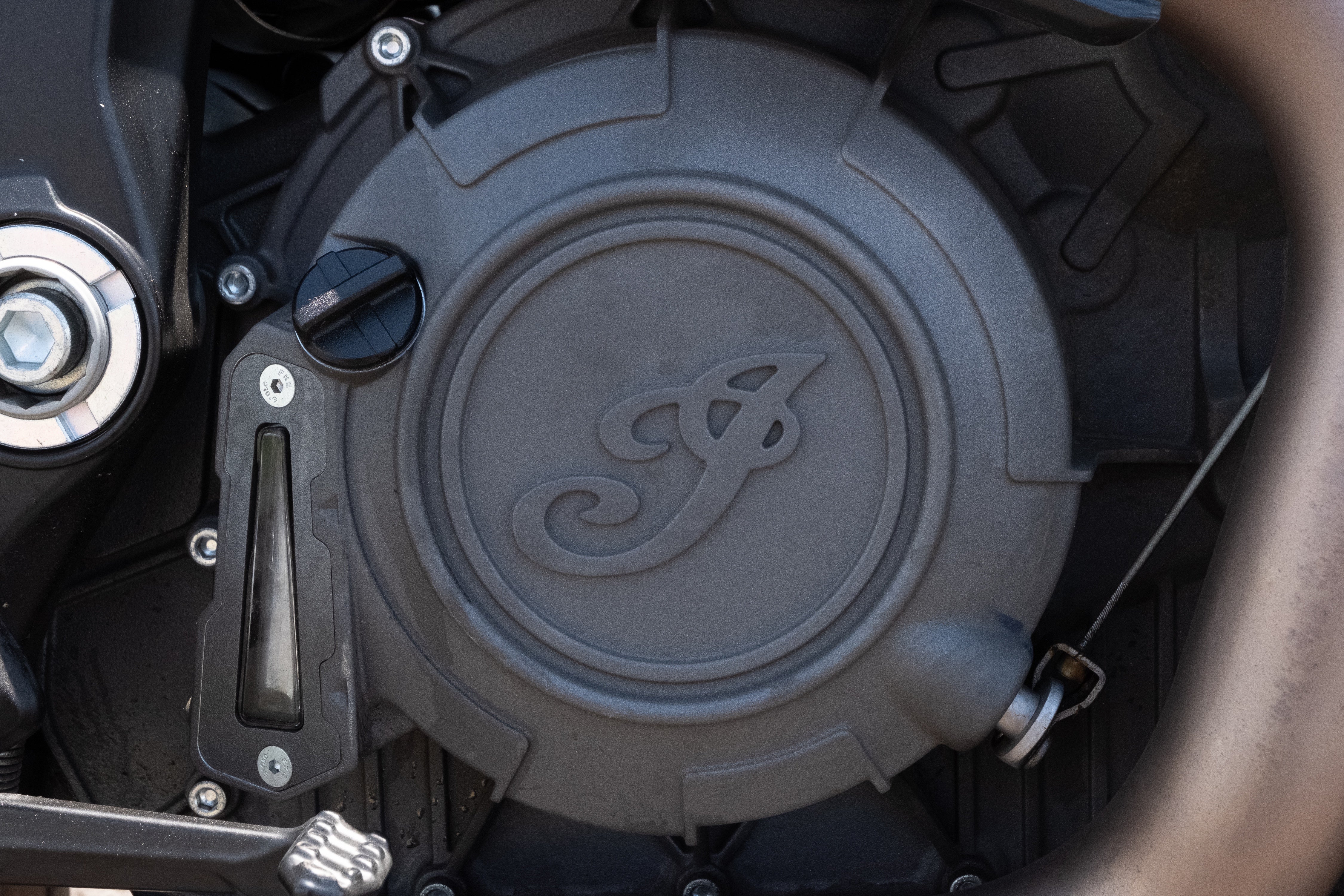 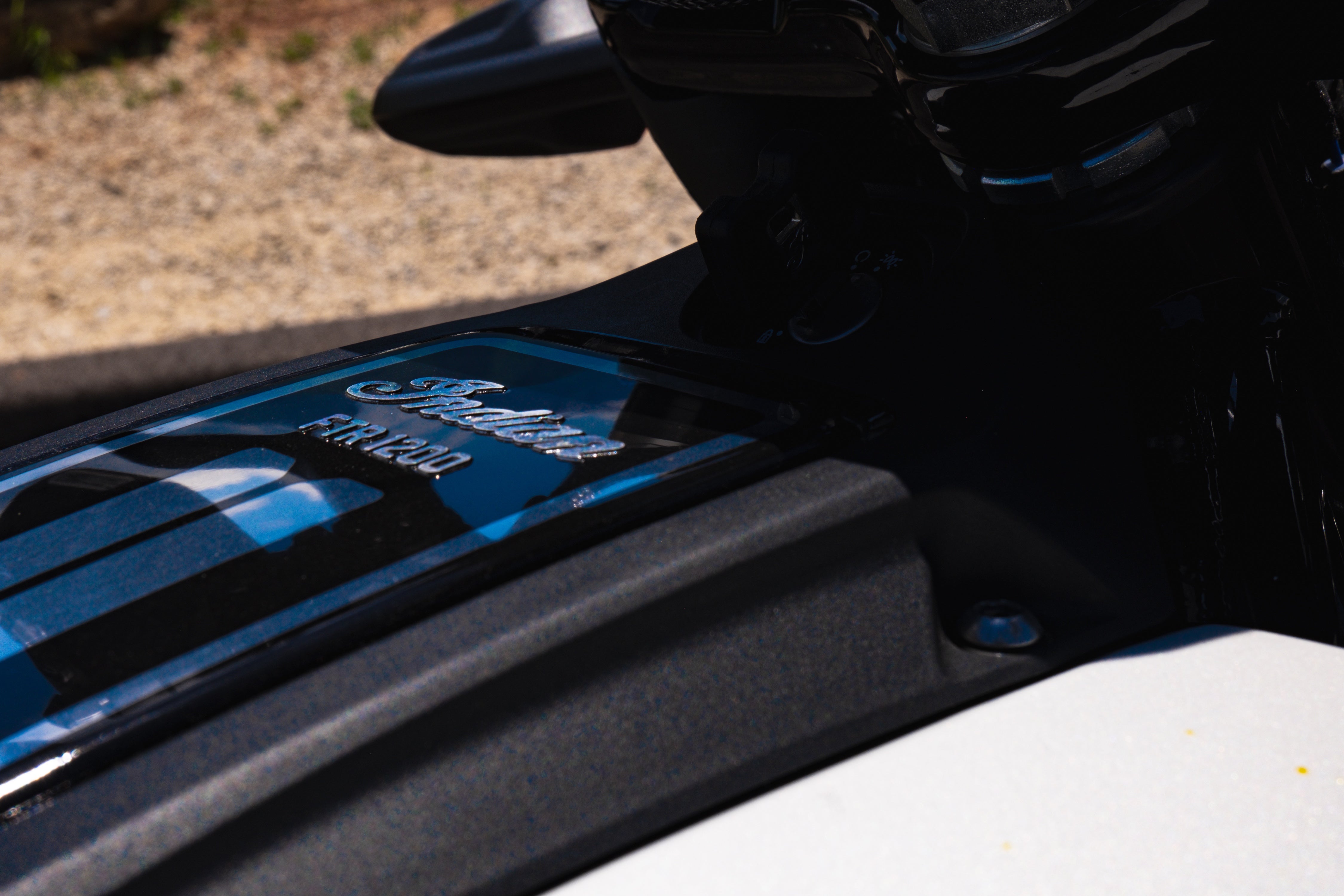 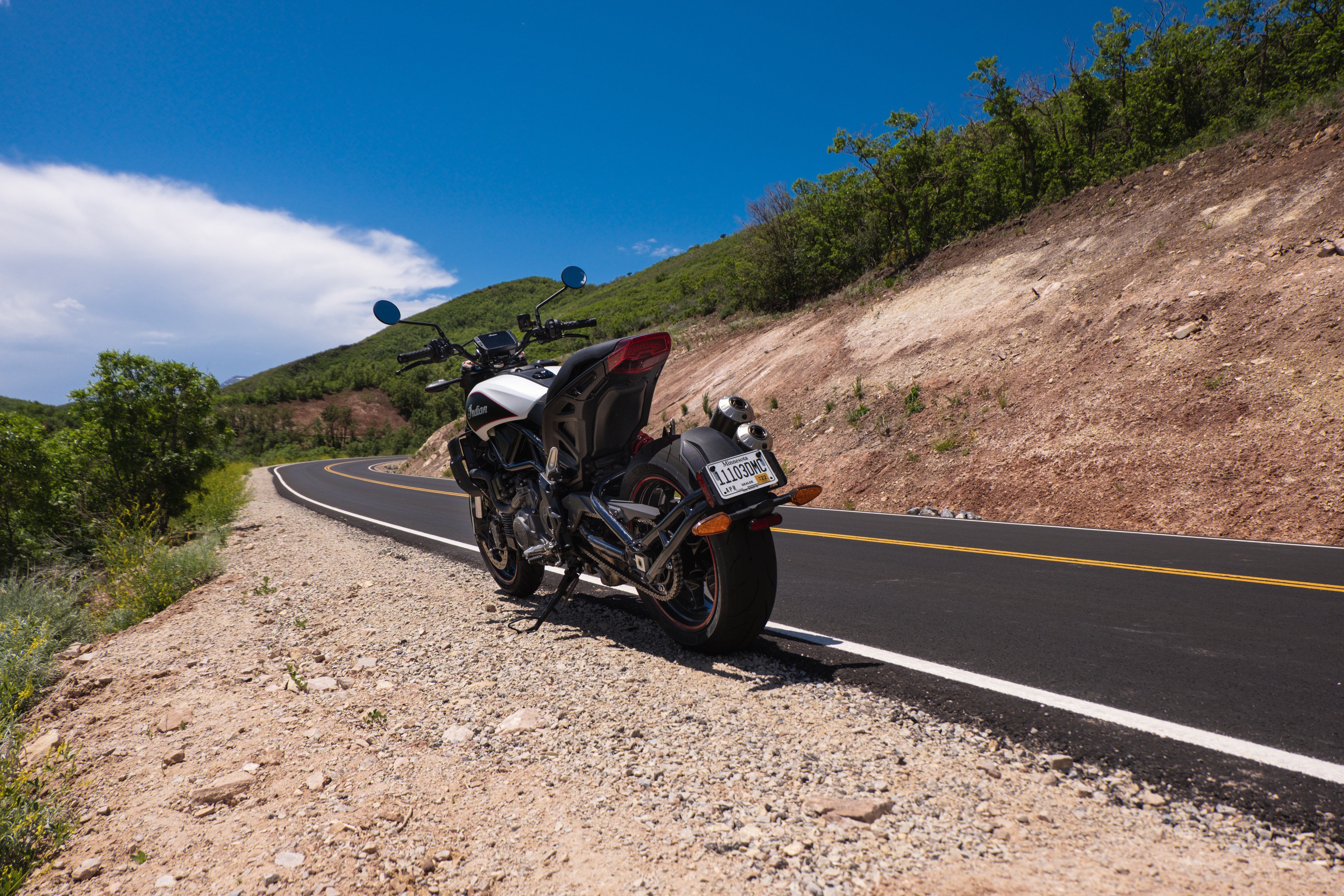 There’s a particularly winding road near my house that undulates up to the Uinta National Forest. You get fast-flowing sweepers, arrow straights for high-speed dalliances, and enough 180-degree off- and on-camber switchbacks to test a motorcycle’s full cornering capability. It’s perfect.

After sufficiently warming up the Metzelers, through those hairpins I’d pull my rear off the seat, push my elbows toward the apex, and lean the motorcycle over, getting my knee close to the pavement. That’s normal operations for a sport naked motorcycle, but on multiple occasions, the front end of the FTR S would shift off the line I initially set up for tight corners. And during a few runs, it wiggled around enough that I felt as if the tires had gone cold and I’d just hit sand—I definitely hadn’t. 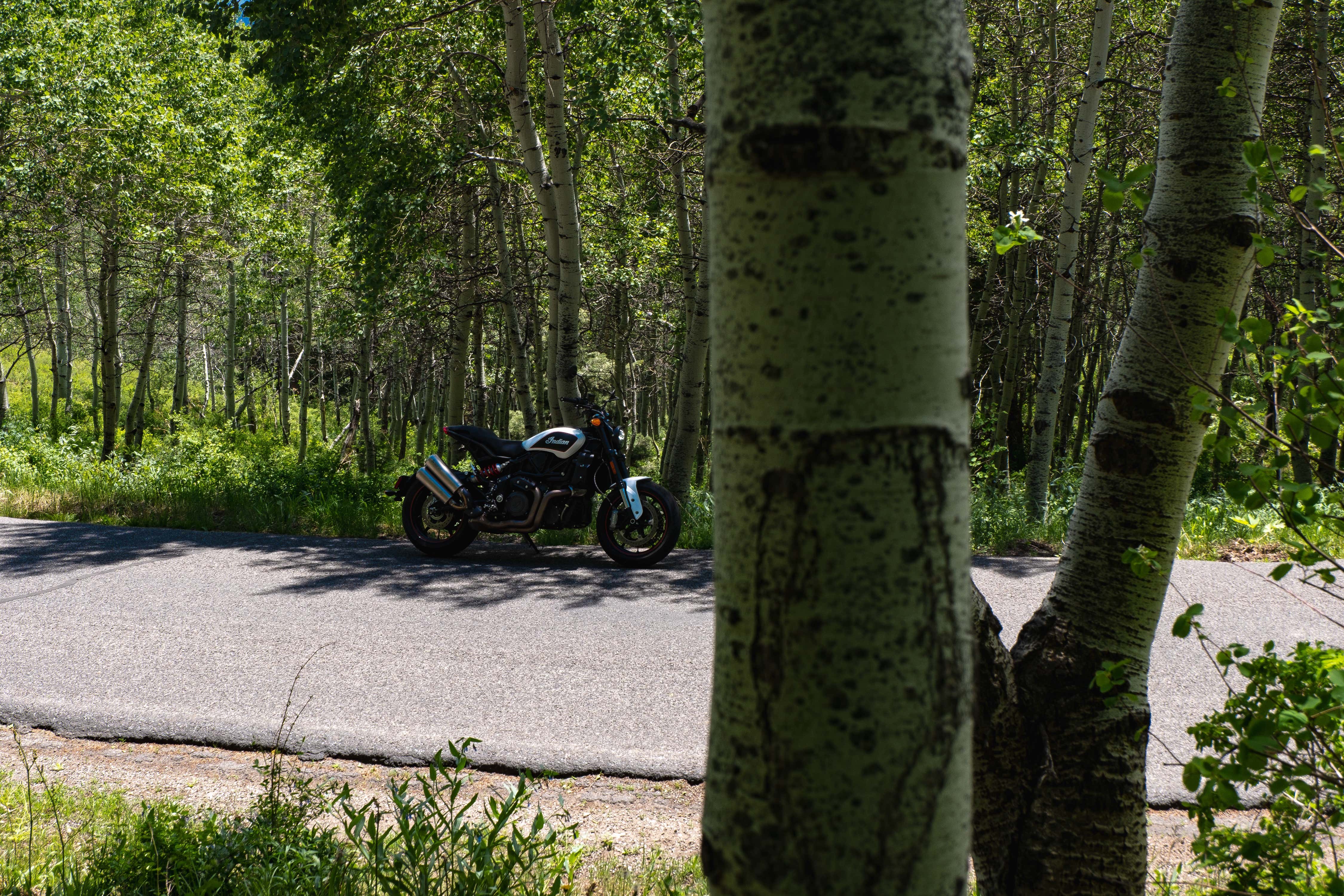 A boxer in amongst the trees.

Initially, I suspected the tires were the problem. Tires warm and cool fairly evenly, motorcycle tires especially, as you’re not loading up the sidewalls as often as the middle rubber. But during subsequent outings, the point where things would get sketchy on those tighter corners changed. Zero consistency. It almost felt as if the suspension’s rebound load setting was adjusting itself midway through a corner, but not in every corner or even the same corner I’d just gone through.

Weirder, this was only an issue for when the bike and I encountered 180-degree or more switchbacks and corners with tight apexes. Flowier, less severe curves elicited the handling I remember from the FTR 1200 S, though. I’d set myself up, set a speed, lean, and the bike would go exactly where I pointed its nose.

The ZF suspension is adjustable, just like the Ohlins, but the Ohlins came from Indian in the right setting. After my many days in the saddle, I would’ve had to fiddle with the ZF Sach’s settings to dial them in—I’m not a fan of doing that on vehicles I don’t own, so I left it as it was. And while that adjustability may intrigue many, why couldn’t Indian be bothered to dial in the ZFs when it had done so perfectly for the FTR1200 S’ Ohlins? Maybe there’s an answer in those settings, though. 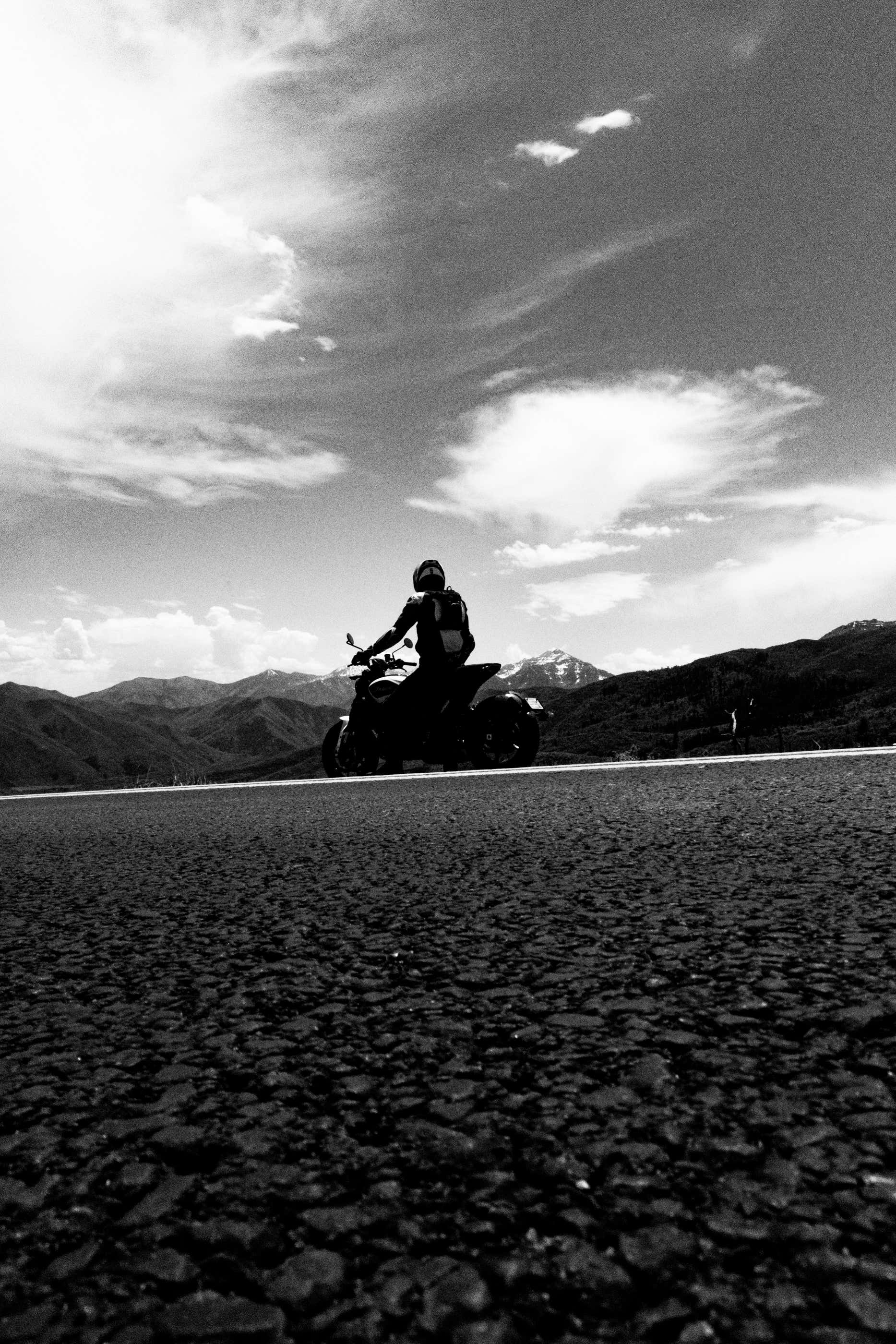 Went for an Ansel Adams vibe for this.

On roads without technical turns, like the one that slices through the Timpanogos, overlooking a reservoir, and ends in Sundance, the FTR S is the boxer I remember. The 120 hp and 87 lb-ft of torque are delivered in such a way, the V-twin feels—and yes, this is cliche but no less true—as if it becomes an extension of your being.

From one corner to the next I’d flow, getting onto the throttle and laughing in my helmet from the V-twin’s oomph, poise, and noise. An Akropovic exhaust comes standard on the FTR S and yeah, it’s great, delivering the sort of gravely and gnarly bark a V-twin should have. The new, shorter bars make it easier for directional changes, and the seat remains supremely comfortable for long rides.

The Indian’s Brembos are solid and shed speed with urgency, though the action on the brake lever is a little longer than I’d like. I personally prefer it to be closer to the throttle in travel for easier adjustment. Same goes for the clutch. The shifter, however, gives a solid ka-chunk with each shift, and it’s almost as satisfying as a Mercedes-AMG G63’s door locks.

On my outings with the FTR, I may have even lost track of time and angered my wife on a number of occasions, who was home by herself with our three children. There’s just something about an American motorcycle, the mountains, and the verdant spring in the West that makes time seem meaningless. A damn-good motorcycle that needs some minor tweaks.

A Lot of Competition

But while the FTR 1200 S didn’t have any home-grown competition, the FTR S now does. Apart from its suspension tuning, I really like the Indian Motorcycles FTR S. When put into market context, though, its competitors knock it down a couple of notches.

Harley-Davidson just dropped the new Sportster. It’s a spec-sheet wunderkind, a ready-to-rock, mid-control (available), naked motorcycle powered by Harley’s new 1,250cc “Revolution” motor, the same as the company’s Pan America ADV. I haven’t ridden the Harley just yet, but from friends and colleagues’ reactions, it’s a barn burner of a bike. And, along with its main competitors, that may spell trouble for the FTR S.

Yamaha’s offering is solid and the cheapest of that group, but the throttle-by-wire isn’t as direct as I would like it. And I’ll have to reserve my judgment for the Sportster S until one shows up on my doorstep. What this means for the Indian is that while the FTR S is good, because of its bevy of growing opponents, it can’t just be good. 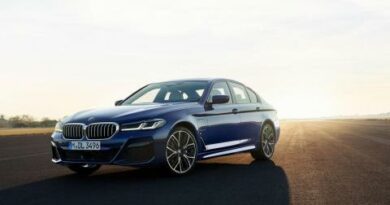 BMW 5 Series facelift to be launched on June 24 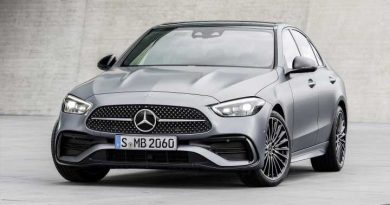 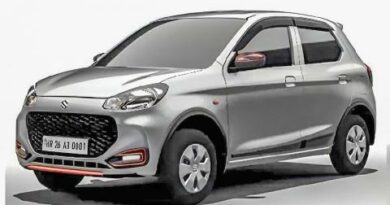