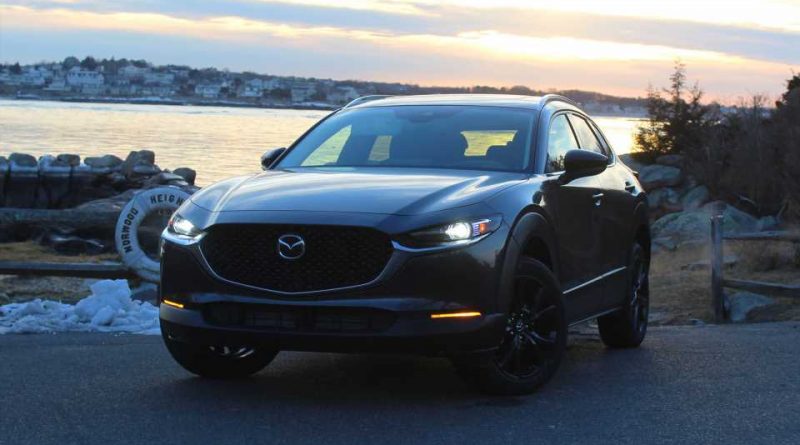 I would imagine it was difficult for Mazda—a brand that considers handling dynamics and sportiness a part of its core ethos—to take its excellent-handling “3” hatchback and, in a nutshell, raise its center of gravity for the sake of calling it something else and selling more of them. And yes, even if it meant entering the fastest-growing, most popular segment in the auto industry. For those who don’t know, it’s best to tell you this right away: the CX-30 is a Mazda 3 Hatchback with a lift, some plastic cladding, and a few other changes which turn it from a road-hugging hatch into a “utility vehicle.”

The CX-30, which debuted in America early last year, was always a handsome crossover option. (It’s not to be mixed up with the aging Mazda CX-3, which is based on the smaller Mazda 2 platform. Confusing!) But now that Mazda has added a 250 horsepower turbocharged four-cylinder option, enthusiasts are really paying attention. 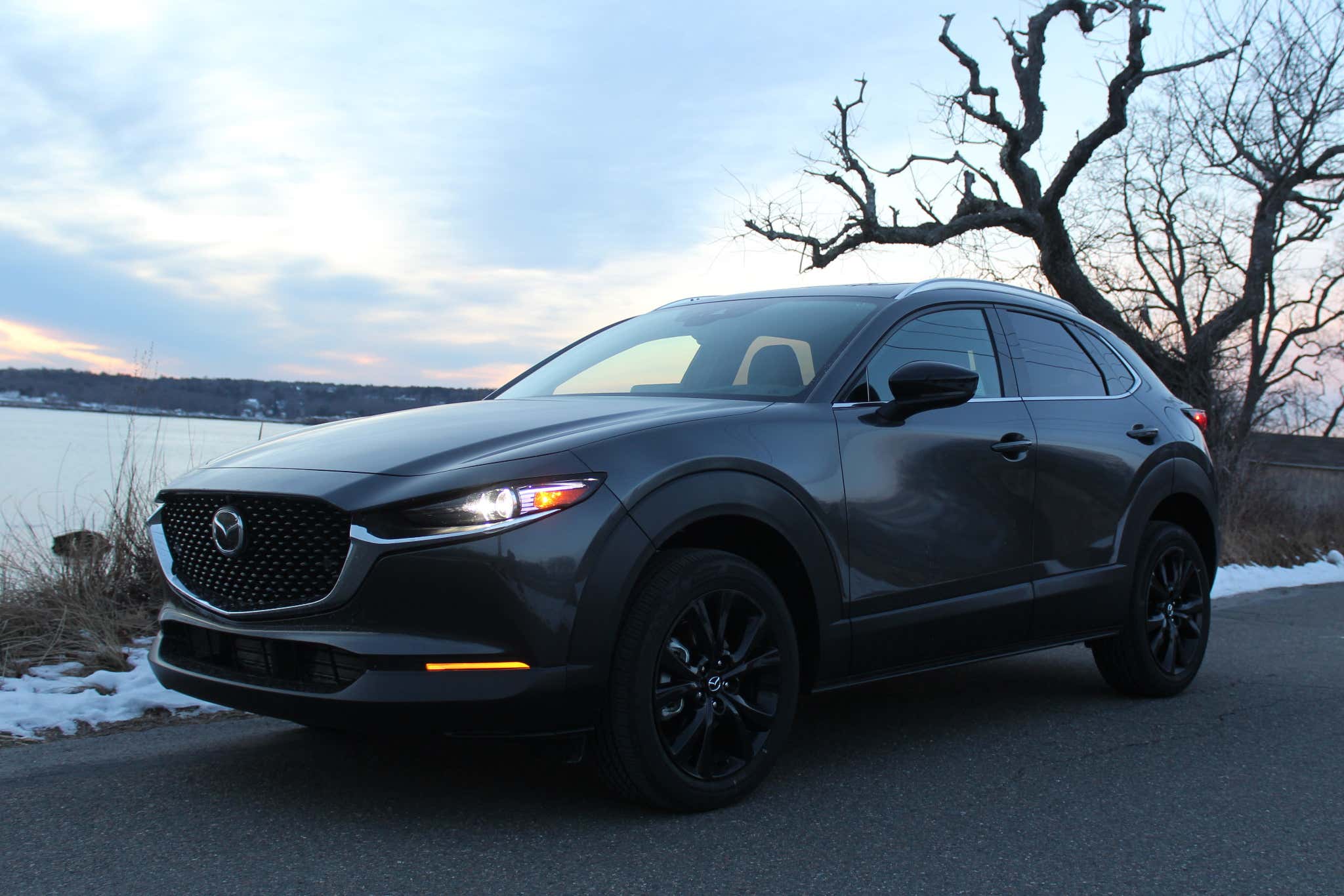 And the results, happily, feel like anything but a marketing-driven cash grab. The CX-30 does lack in a few areas; the infotainment system is just not up to snuff unless you use Android Auto or Apple CarPlay, the lane-centering system—which Mazda calls Traffic Jam Assist—only works under 40 miles per hour, and the visibility out of this thing is pretty limited. However, the Japanese automaker has, somehow, made the compact crossover seem a little less like the sort of vehicle purchased by people wholly restrained by the chains of practicality.

It’s not a total home-run and it’s clear where it’s lacking, but there’s a lot to like here that’s really worth talking about.

The first thing is the drivetrain. Mazda is trying to move upmarket, and to that point, its competitors will have a tough time matching this engine and transmission. The 2.5-liter turbocharged inline-four delivers a tremendous torque from very low RPM all while sounding pleasant, making no harsh vibrations, and responding quickly to changes in throttle position. Its power delivery feels solid like a brick… uhh… shore house.

The transmission is its loyal companion here as well, ensuring the RPMs stay where the engine is going to make you happiest and changing gears quickly up or down when you ask with the paddle shifters. Above 5,000 RPM, for example, the horsepower power and torque both fall off, but the transmission never really takes you there. This all adds up to a drivetrain that always feels ready for a fight around town or on the Interstate.

The highway is one place where the CX-30 does show some of its weaknesses, though. A Mazda engineer made it clear to me that the Traffic Jam Assist (TJA) is meant for just that; relief from the monotony of slow-moving traffic. However, TJA doesn’t present itself as one that’s only to be used at lower speeds, for a few reasons. The first is that most other lane-centering systems work at highway speeds, i.e., above 40 mph.

The other is that there’s no indication that this system is only intended for use below 40 mph; the button used to enable it is the same steering wheel-within-lane sort of icon used by pretty much every other automaker. The result of this was spending much of my time waiting for the little steering wheel on the dash to turn green again after I was un-stuck in traffic. It never did, of course. 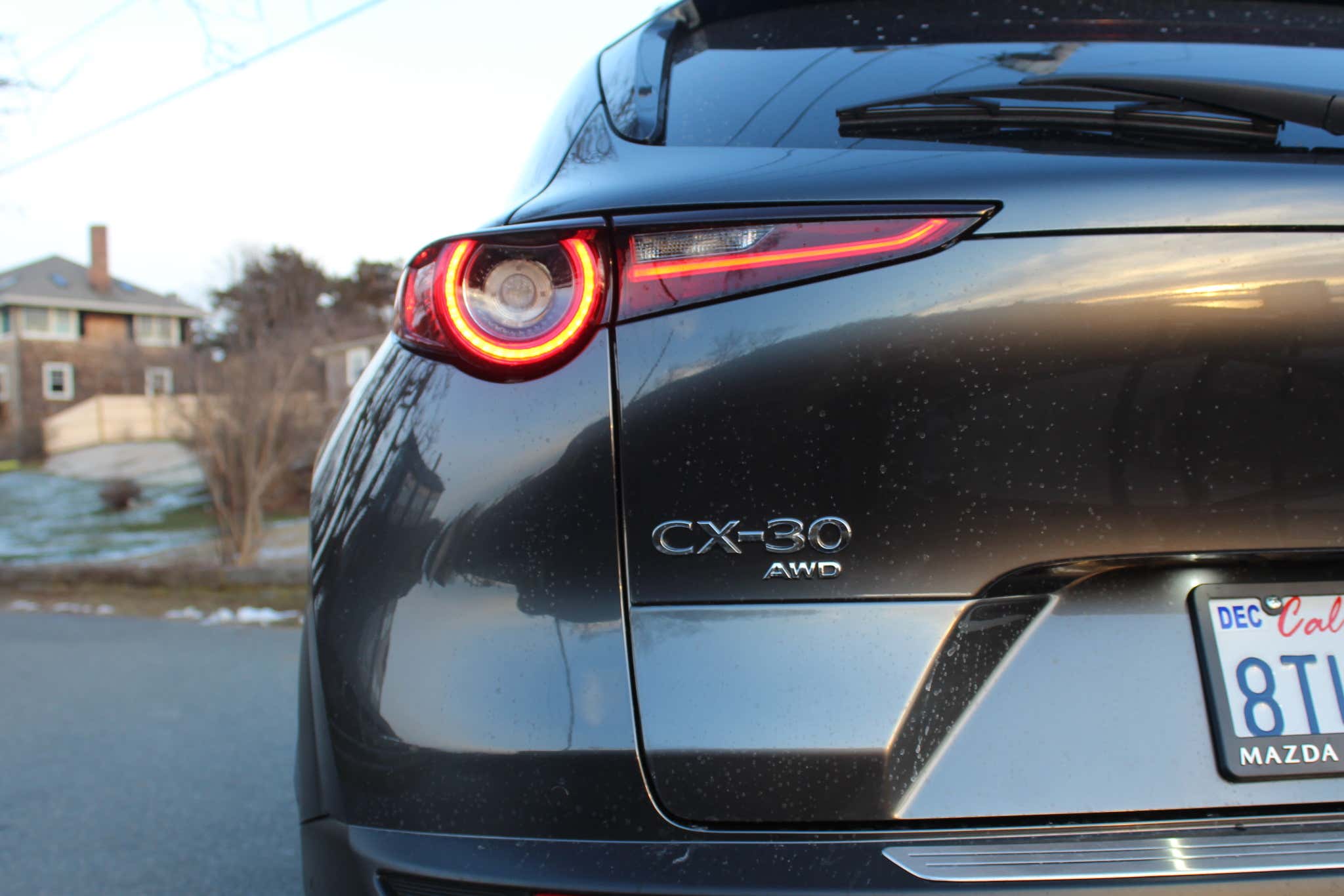 The infotainment system also left something to be desired. Changing stations on the satellite radio was a process, and when I paired my phone using Bluetooth—not Android Auto or Apple CarPlay—the system wouldn’t tell me what song was playing. That seemed like a pretty major oversight. All it told me was that a song from my phone was indeed coming through the speakers, and it was however many minutes long. The novelty of musical Charades wore off after about two songs. Enabling Android Auto does away with the in-house infotainment almost completely, which solved the problem, of course.

That being said, the CX-30s sound system was above average. The interior—as Mazda engineers told me—was carefully designed to ensure that audio from all 12 speakers was channeled directly at your ears—not just bounced around the interior as it is in other vehicles. The result is a system that sounds clear, well-balanced, and high-quality. That sort of thoughtful design was also not just limited to the sound system.

This Mazda was one of those cars that—with the exception of the infotainment system—you can just get in and understand. The important stuff is where you can see it, it’s all reachable without a fuss and it’s obvious that the tactile feel of all the switchgear was tuned really carefully. The HVAC controls are clean, simple, and provide great feedback. The drive mode selector, likewise, feels appropriate for what it does; a tightly sprung click forward or backward clearly indicates that you’ve changed the behavior of the entire vehicle. It’s refreshing to sit in a car that finally gets this stuff. 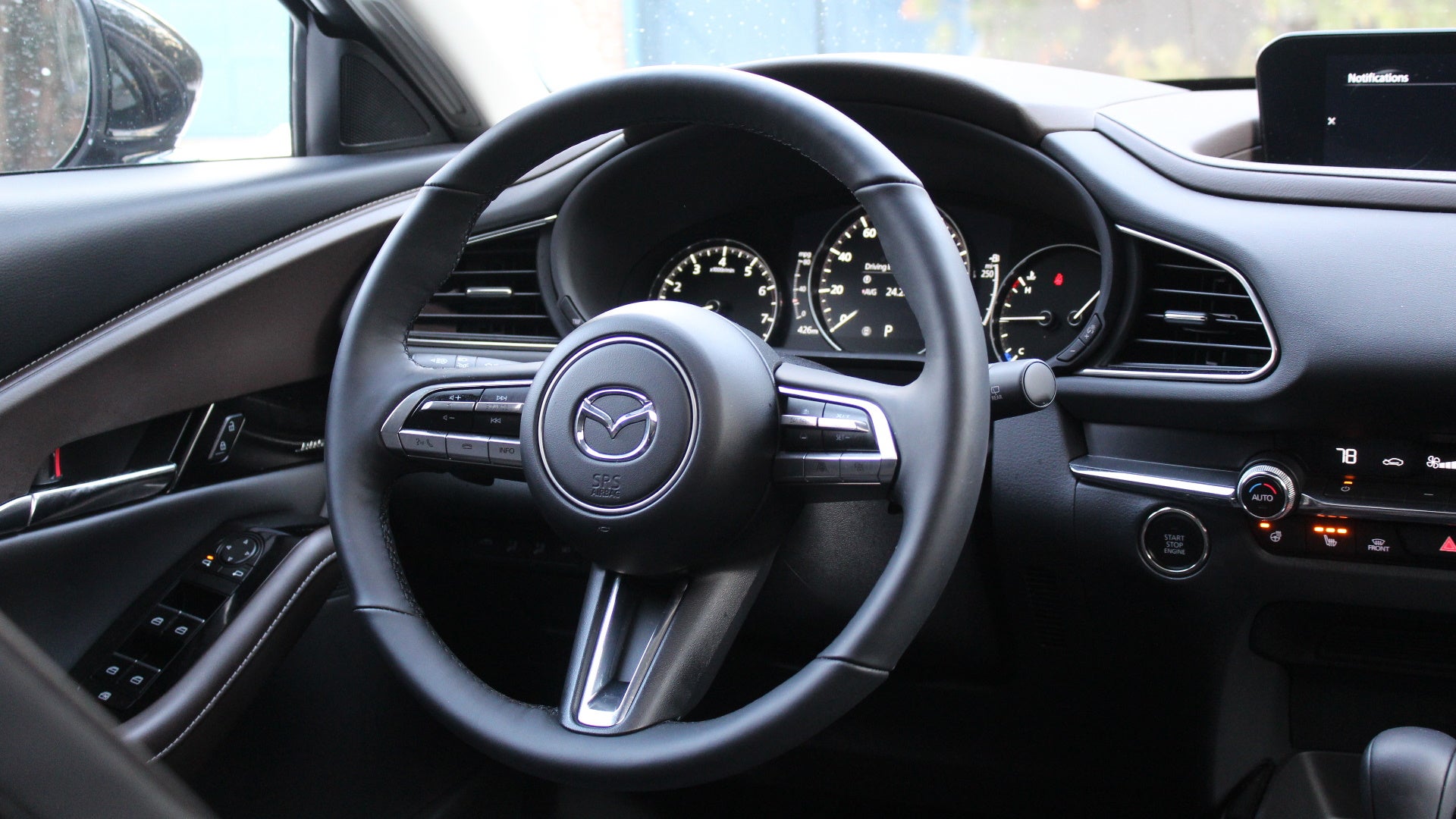 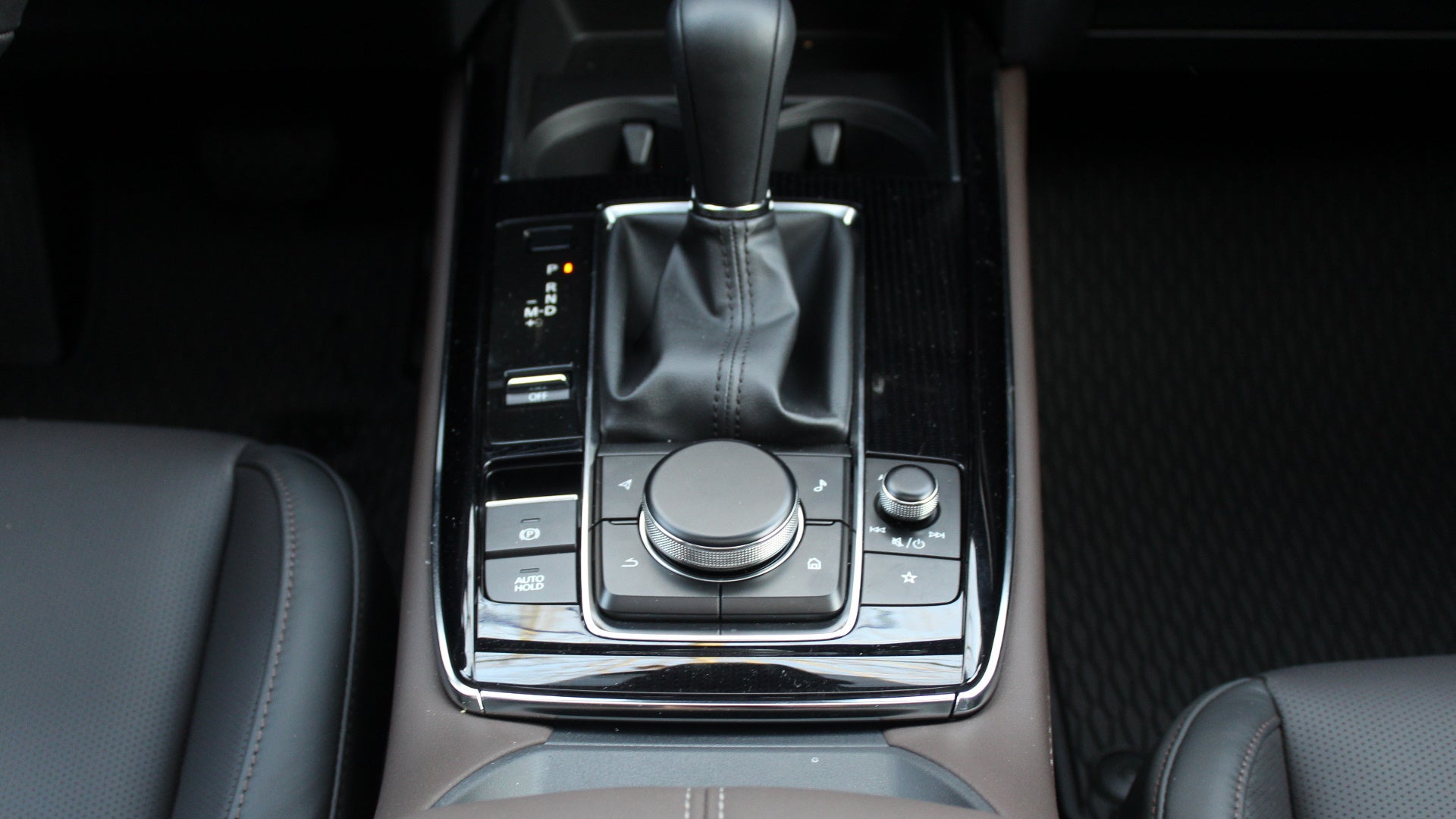 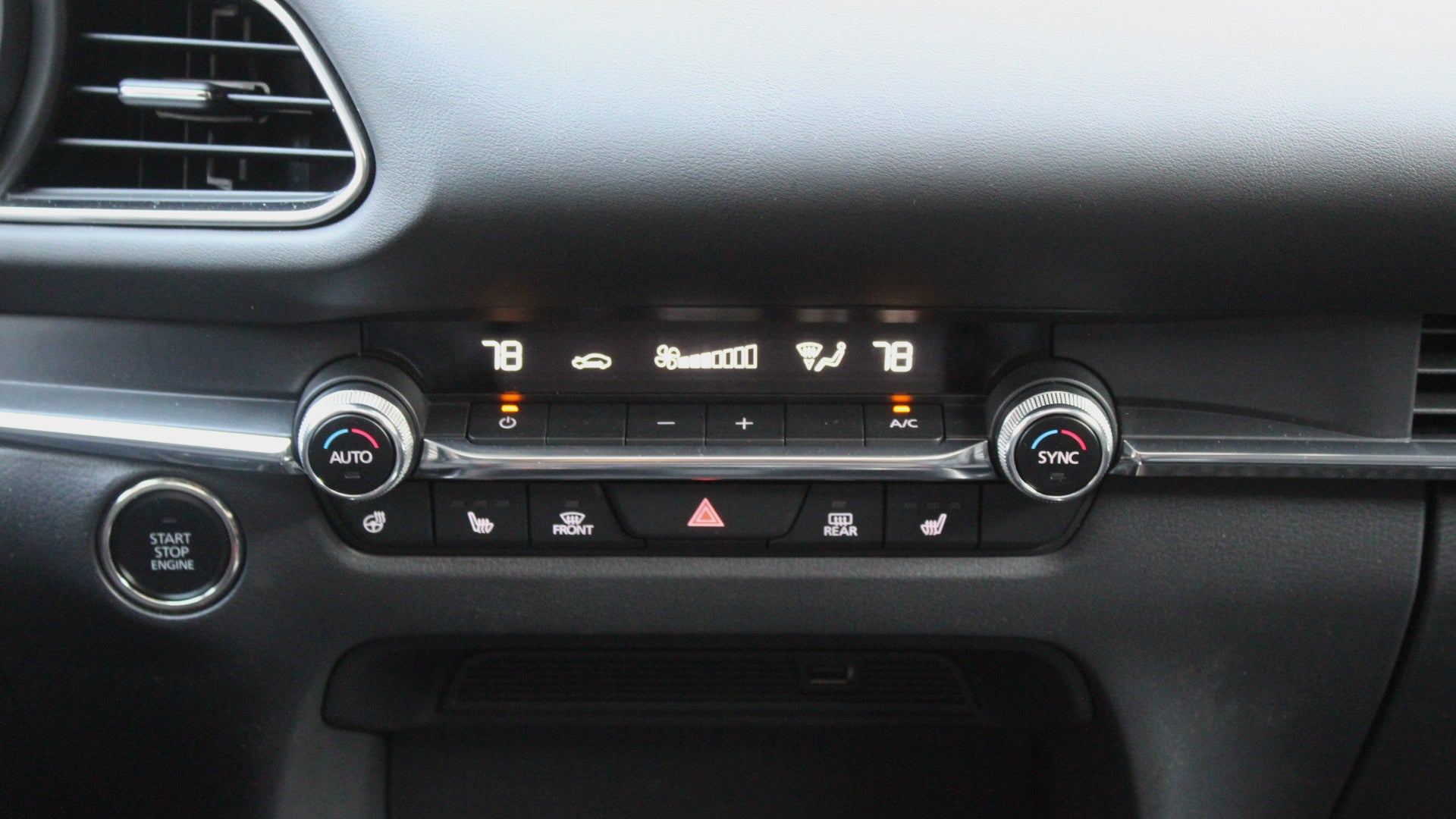 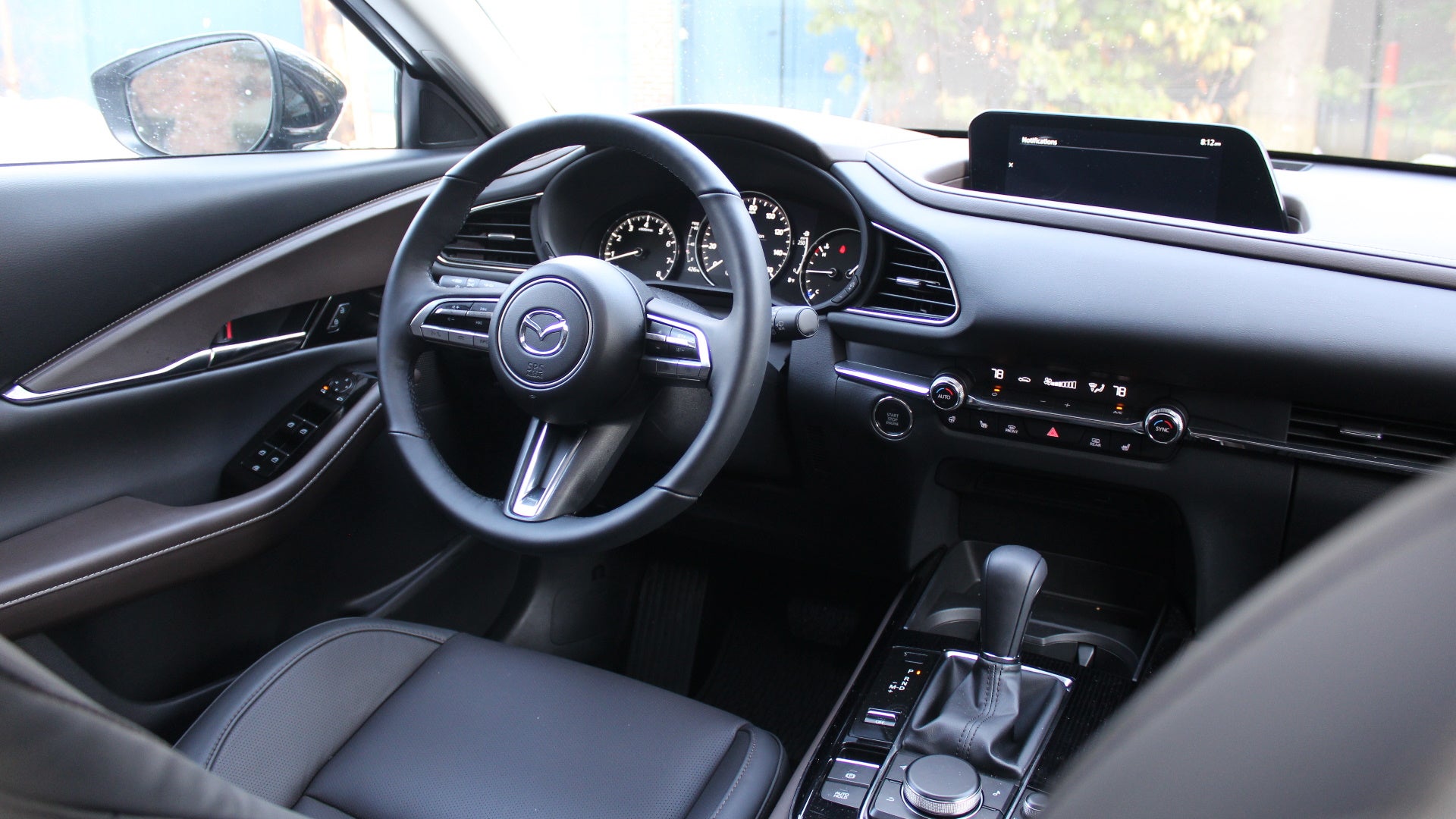 This well-thought-out switchgear isn’t all embedded in a cheap-feeling plastic dash, either. No part of the car feels substandard. The seats are supportive, adjust well, and are comfortable. The dashboard is very soft to the touch, nothing makes that awful plastic crinkle noise when you depress it, and while it may not be the most interesting interior to look at, everything feels tightened in-place with a breaker bar.

Mazda also clearly gets the fact—or, rather, seems to believe—that there are people out there who want a small crossover like this one but don’t want to be seen as a square. You know; a bore, a drone, a mayonnaise enthusiast. The CX-30 doesn’t drive like a run-of-the-mill crossover, it drives like a taller Mazda 3 turbo hatchback. It feels tight, tidy, it’s like your active, outdoorsy friend from college. The sort where you would ask him to come with you to pick out a new hiking backpack, but you wouldn’t ask if that mushroom over there was OK to eat.

This car’s off-road capabilities are kinda like that, too. It’s absolutely not a hardcore four-wheeler, but it will pull you up an uneven trailhead or get you out of a sticky situation thanks to a re-tuned all-wheel-drive system. The 360-camera can also be used at any speed to help spot obstacles—which is a clever change. The small lift and plastic cladding will likewise ensure that when you get back to commuting on Monday you haven’t ruined your paint or lost your muffler. 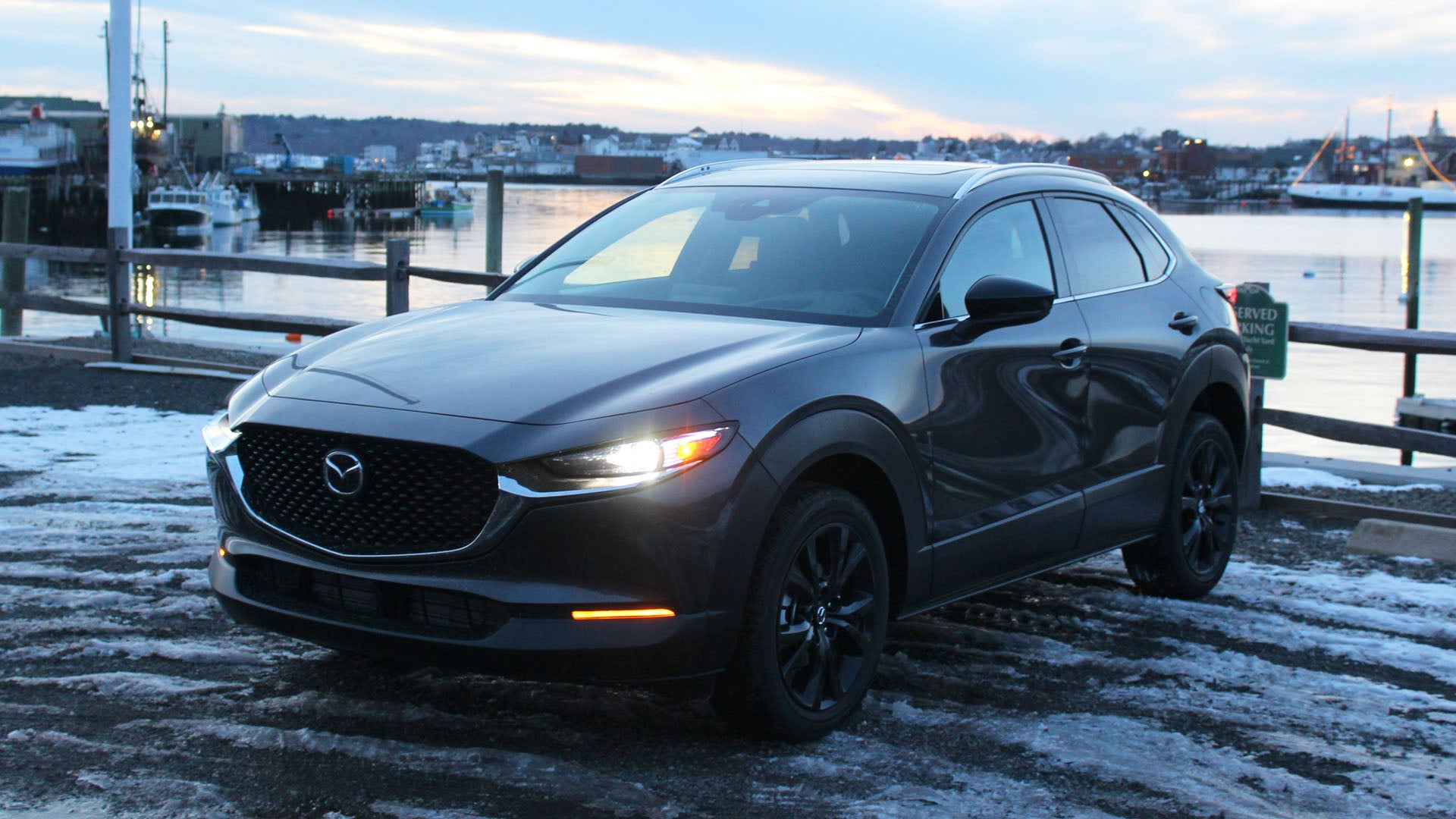 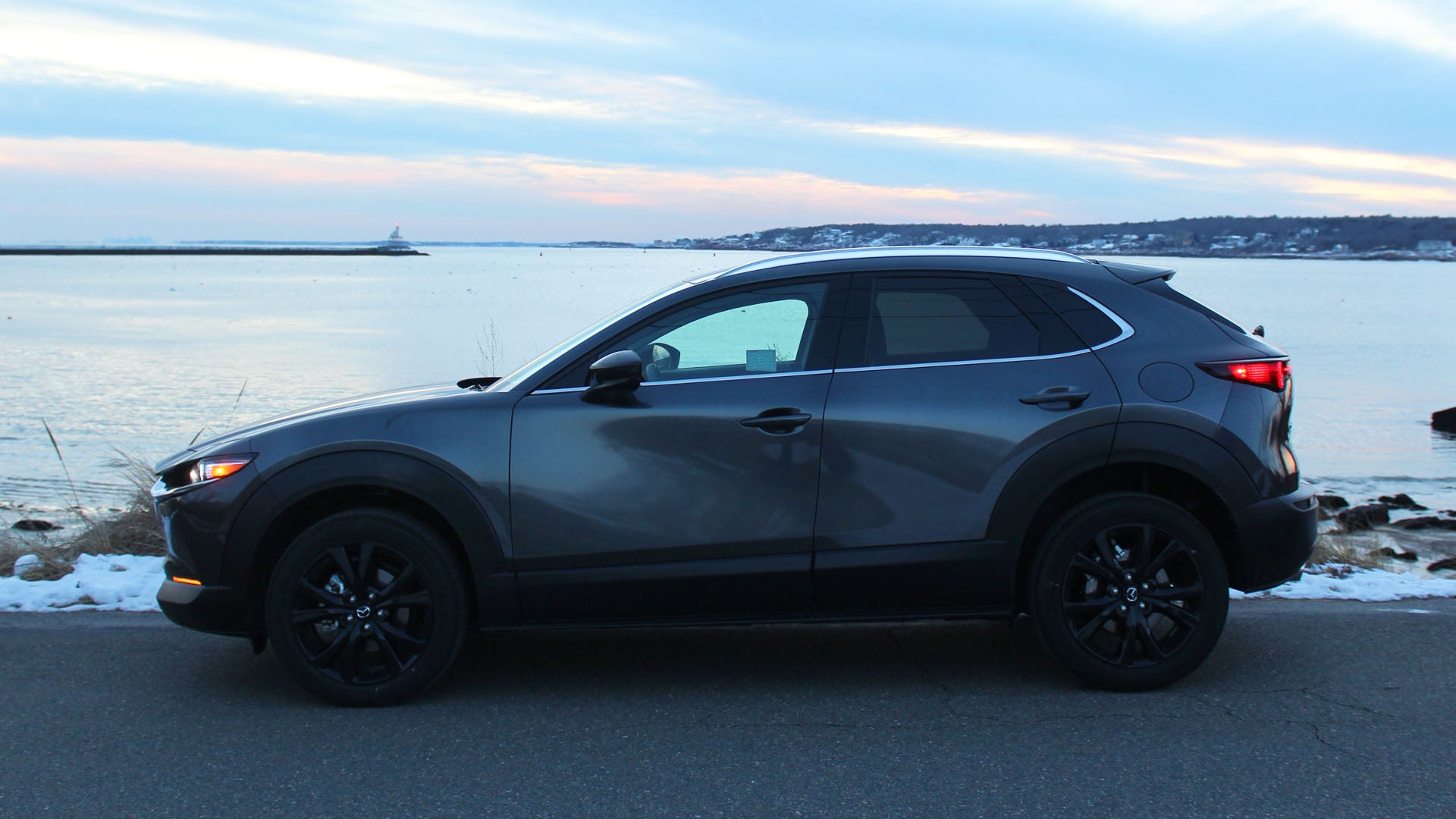 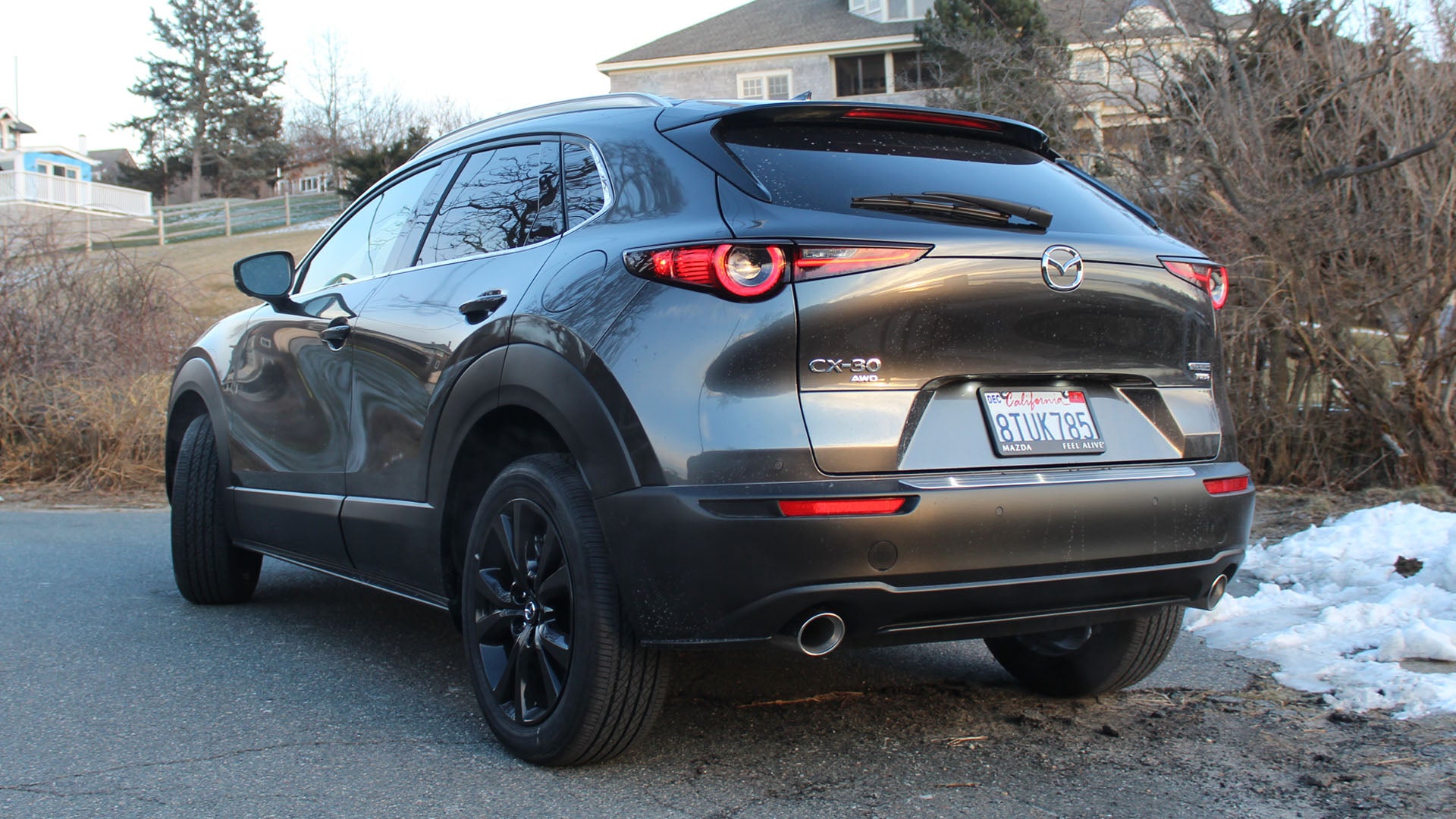 The CX-30 strikes a really nice balance, then. It’s just short of being a real luxury vehicle, but the solid foundation is there. The interior feels very well put-together and its features are mostly intuitive. The engine feels up-market as well, and despite not having the high number of gears that more expensive crossovers do, the six-speed auto never skipped a beat and was very responsive to manual paddle shifts. Sure, the visibility may be a little tight as I mentioned, but the tradeoff for that is a Top Safety Pick+ from the IIHS.

It also doesn’t hurt that it rides great—maybe a hair on the stiff side but never uncomfortable—is fun to throw around, and never skips a beat when you ask more of it. Ever. Around tight city streets, it always feels ready to pounce at an opening in traffic, and quick lane changes or tight corners are handled with ease. The steering is communicative, the tires have ample sidewall so you’re never really getting beat up by potholes, it’s a nimble little city crossover that means business.

So if you’re looking for a fun, powerful crossover for around 30 large, you don’t have to look much further. It’s capable when it counts, it’s fun to drive in almost any situation, and it managed to put a smile on my face despite being one of those little all-wheel-drive jellybean cars that stickler enthusiasts all purport to hate so much. It still has a few flaws and I definitely wasn’t driving a stick-shift Miata, but I didn’t feel like just another fish in the sea. There’s something to be said for being different, and getting it right.

Any additional questions about the 2021 Mazda CX-30 Turbo? Send me a message: [email protected] 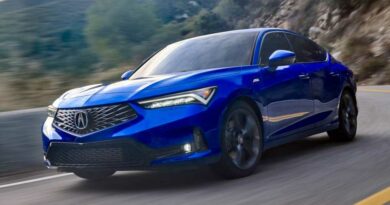 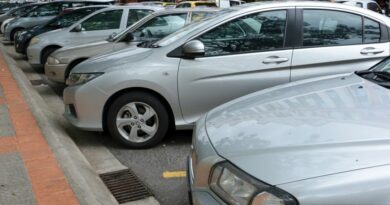 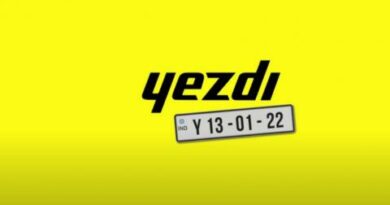