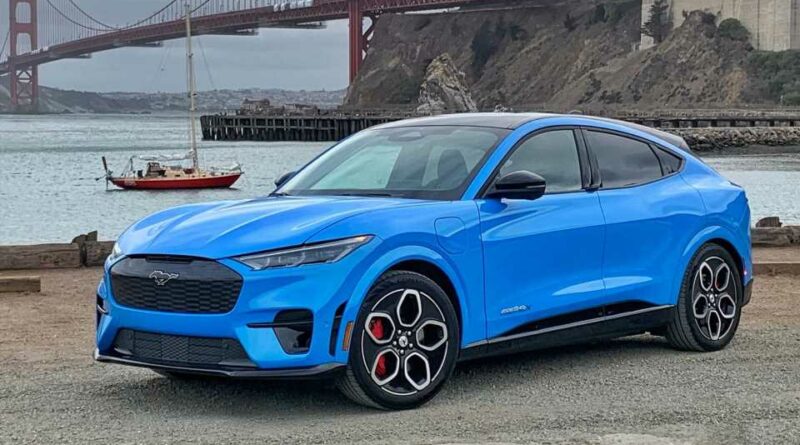 Whether you like it or not, the 2021 Ford Mustang Mach-E is a sales success and here to stay. According to Ford, it is now on track to deliver 50,000 units by the end of the year, and production for the 2021 model is already sold out. Not bad for a year plagued with pandemic-related shutdowns and industry-wide parts shortages, huh? By this measure, the newer, quicker, and more badass 2021 Ford Mustang Mach-E GT and GT Performance Edition should be another home run.

In theory, the premise is simple: If the base Mach-E is the equivalent to the EcoBoost-powered Mustang, then the Mach-E GT is the equivalent to the V8-powered Mustang. But in reality, it’s not that easy. In order to embody the famous moniker, the amped-up Mach-E GT must recreate that powerful GT experience that lifelong Mustang aficionados have come to adore while retaining that down-to-earth approachability that a decent five-seat crossover must also have. 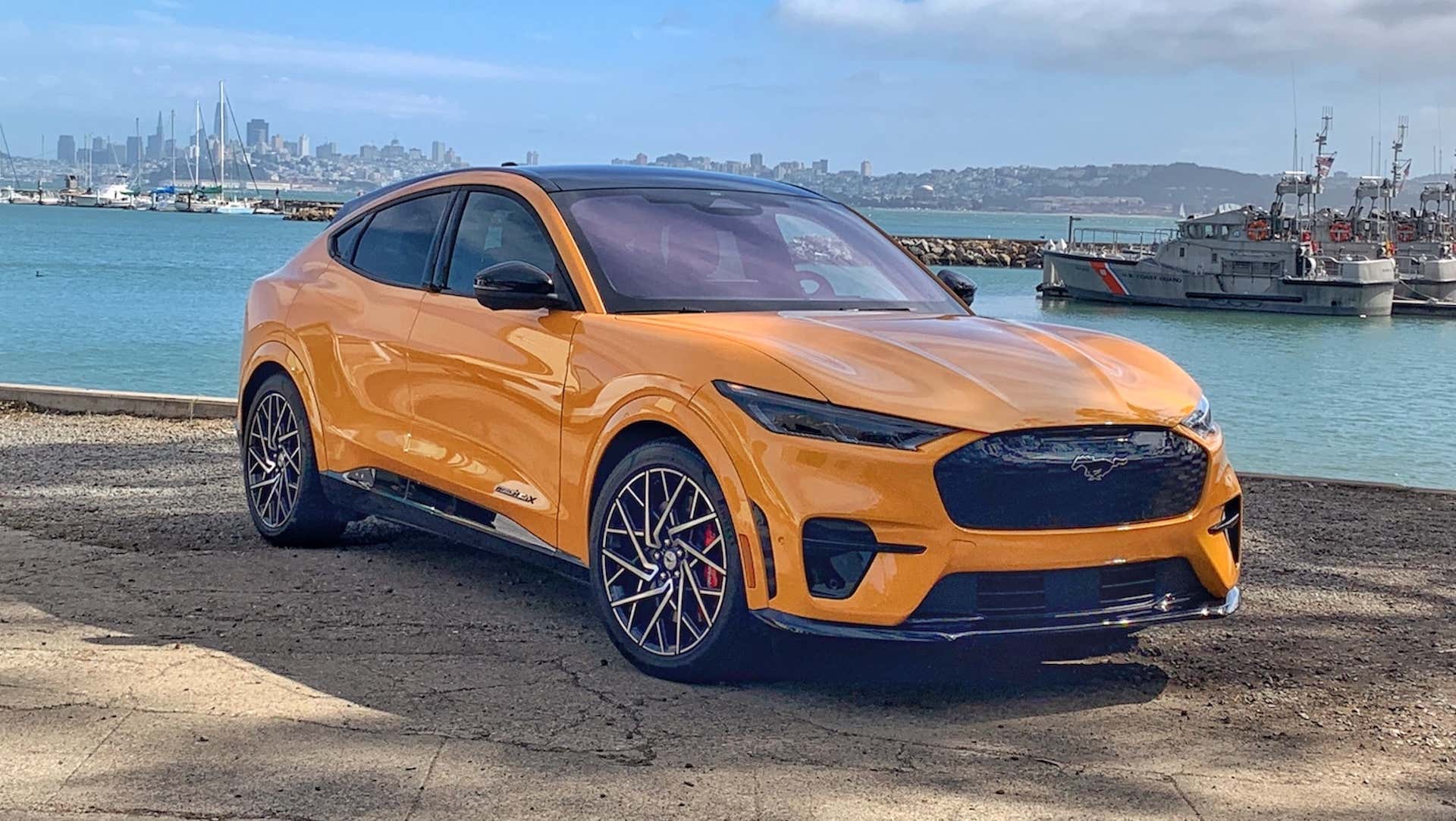 Making this task even more difficult is the fact that buyers of gas-powered Mustangs are okay with exchanging a few miles per gallon for more power—in fact, they’re proud of it—while EV buyers (especially first-timers) probably care very deeply about getting as much range as possible. It’s safe to say, then, that slashing the Mach-E GT’s range the name of speed wasn’t in the cards for the Blue Oval.

So, did Ford pull it off? At the very least, in terms of raw speed that legitimately caught me off guard, I can say this: Hell yes.

After spending a week with the regular Ford Mustang Mach-E earlier this year and being truly impressed by it, I expected the Mach-E GT to be nearly the same package but with different wheels, a flashy paint job, and a bit more oomph. I was so wrong. 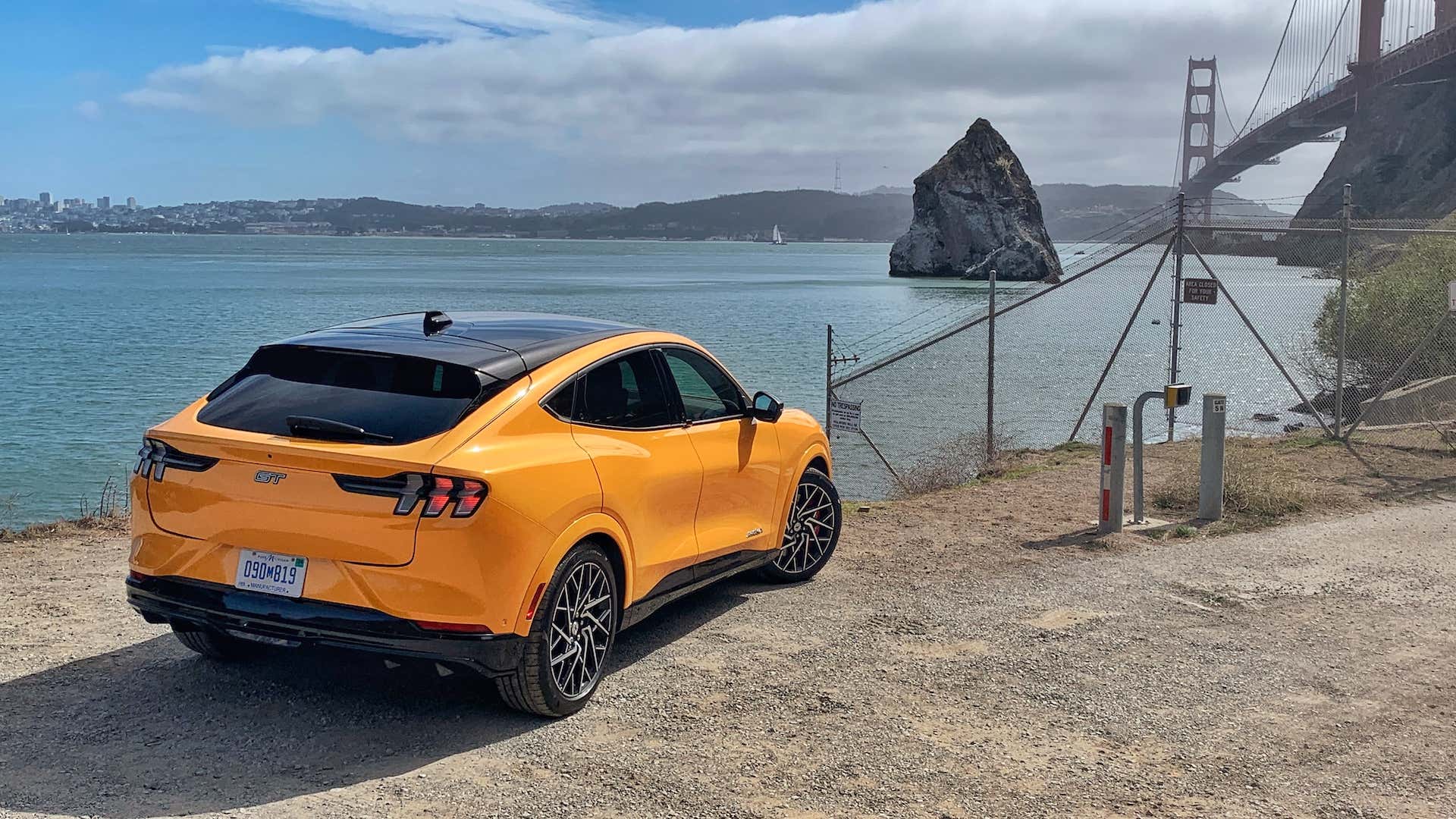 The changes made to the base model to bring it to GT level go much deeper than that. They range from recalibrating the motors and all-wheel-drive/traction control systems to lowering the suspension, beefing up the front brakes, developing new trim-specific tires, and even adding a new, super-spicy driving mode called Unbridled Extend. This extension of the already cheesy-sounding Unbridled Mode is for track use and specifically designed to deliver higher, more linear performance for longer periods of time.

Of course, cosmetic changes were also in order, with the GT and higher-performing GT Performance Edition getting a slew of attractive visual updates to make them look the part. Up front, they gets a faux grille that resembles the honeycomb one found on the traditional Mustang, framed by a more aggressive fascia with twin air inlets at each corner.

The rear doesn’t get as much attention in terms of design changes, with just a GT badge replacing the pony between the taillights. One place Ford did focus on—and quite frankly hit it out of the park—is wheel design. The GT and GT Performance Edition get trim-specific wheels, the former boasting sweet, aero-style, black 20-inch wheels wrapped in 245/45R20 rubber developed specifically for the GT by Continental. The latter gets ornate, multi-spoke 20-inchers wrapped in high-performance Pirelli summer tires. 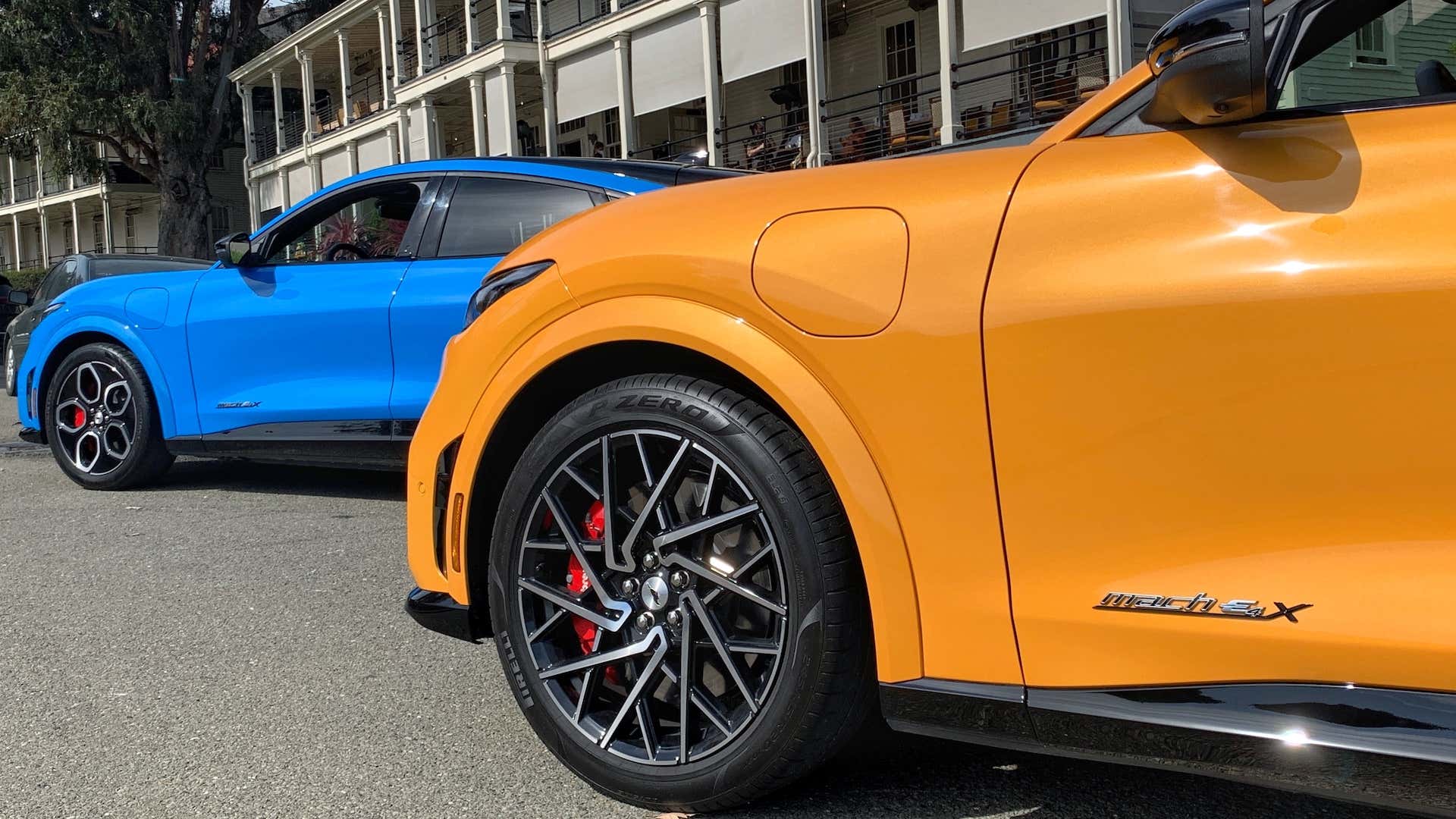 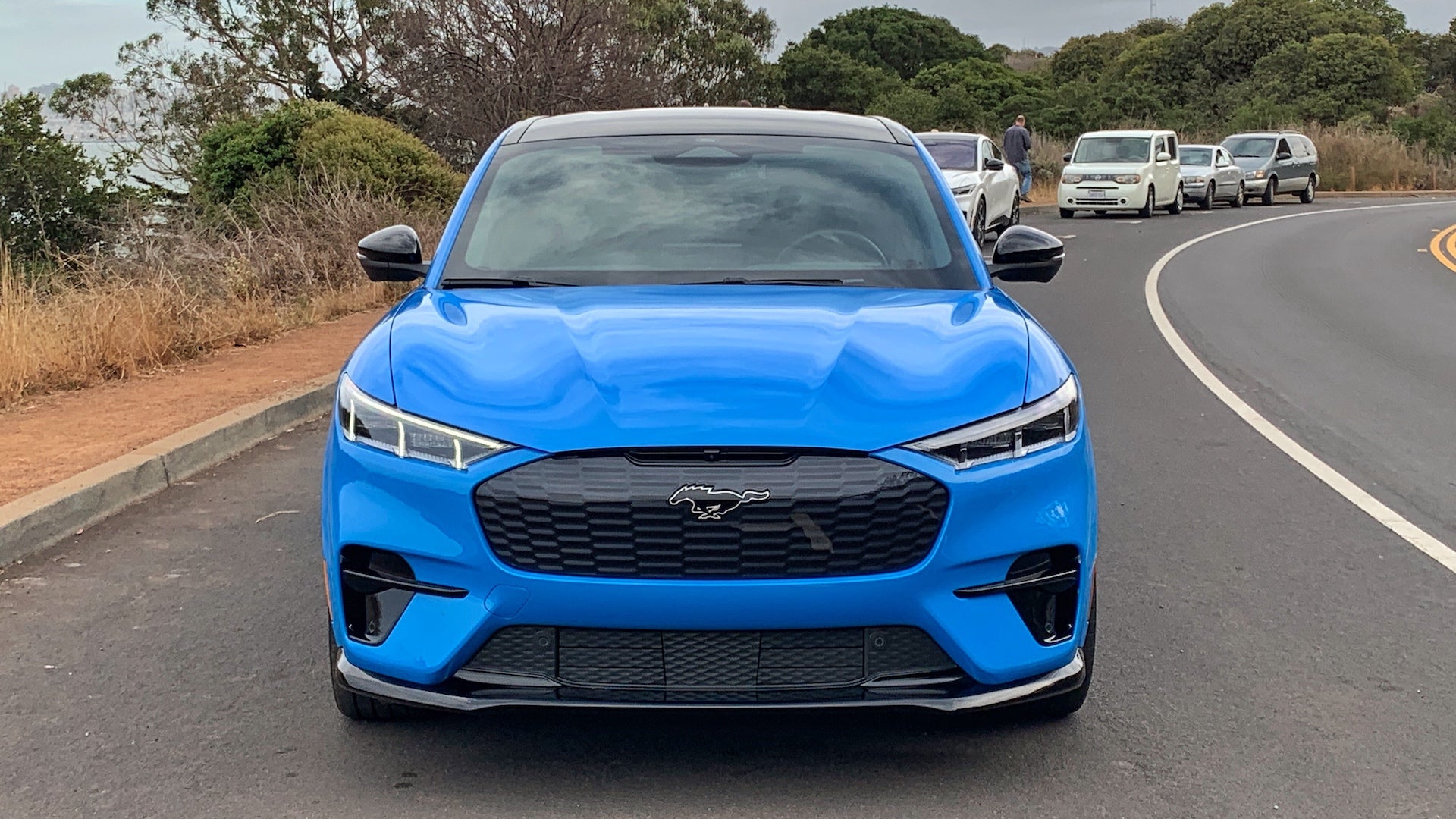 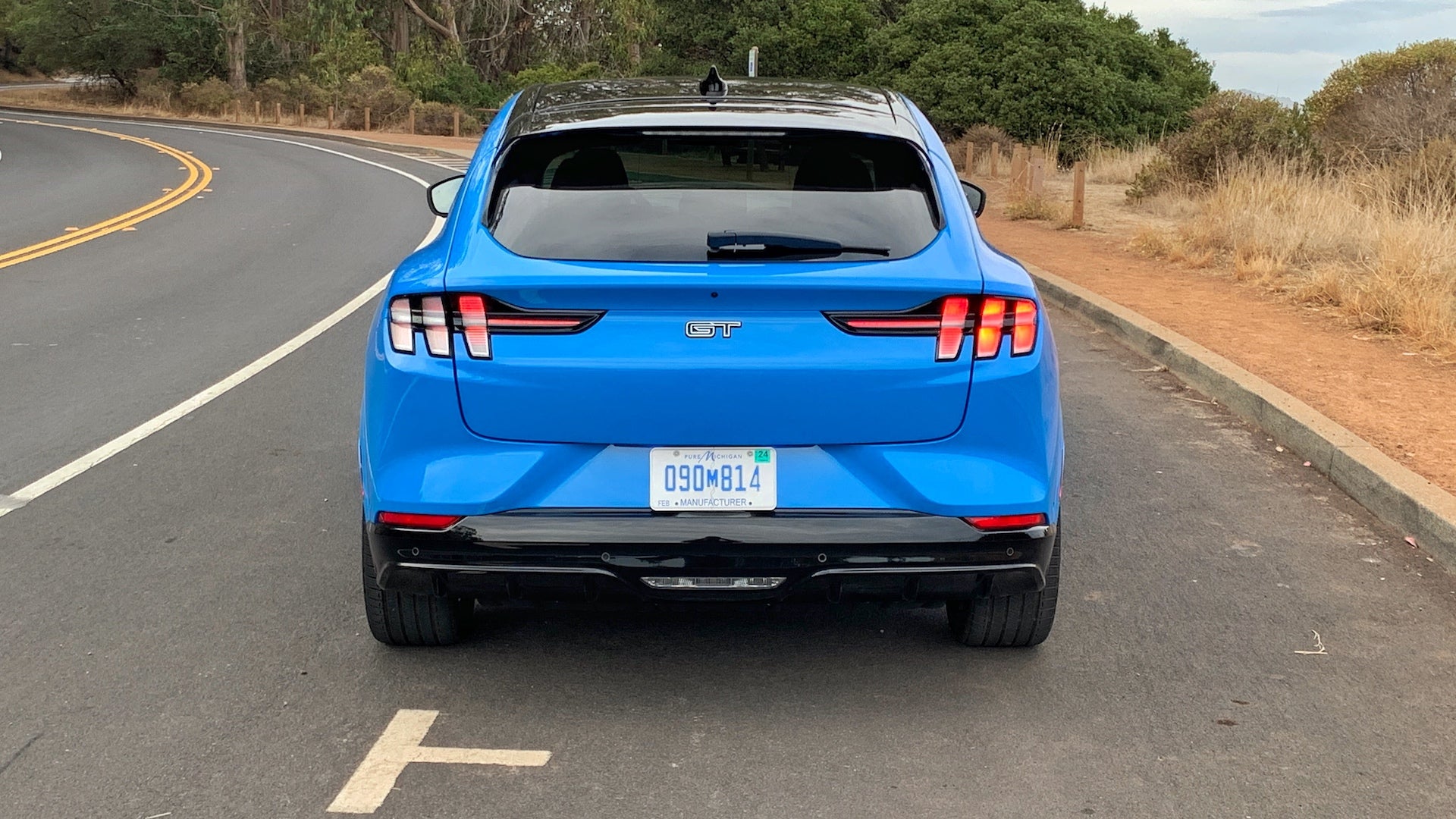 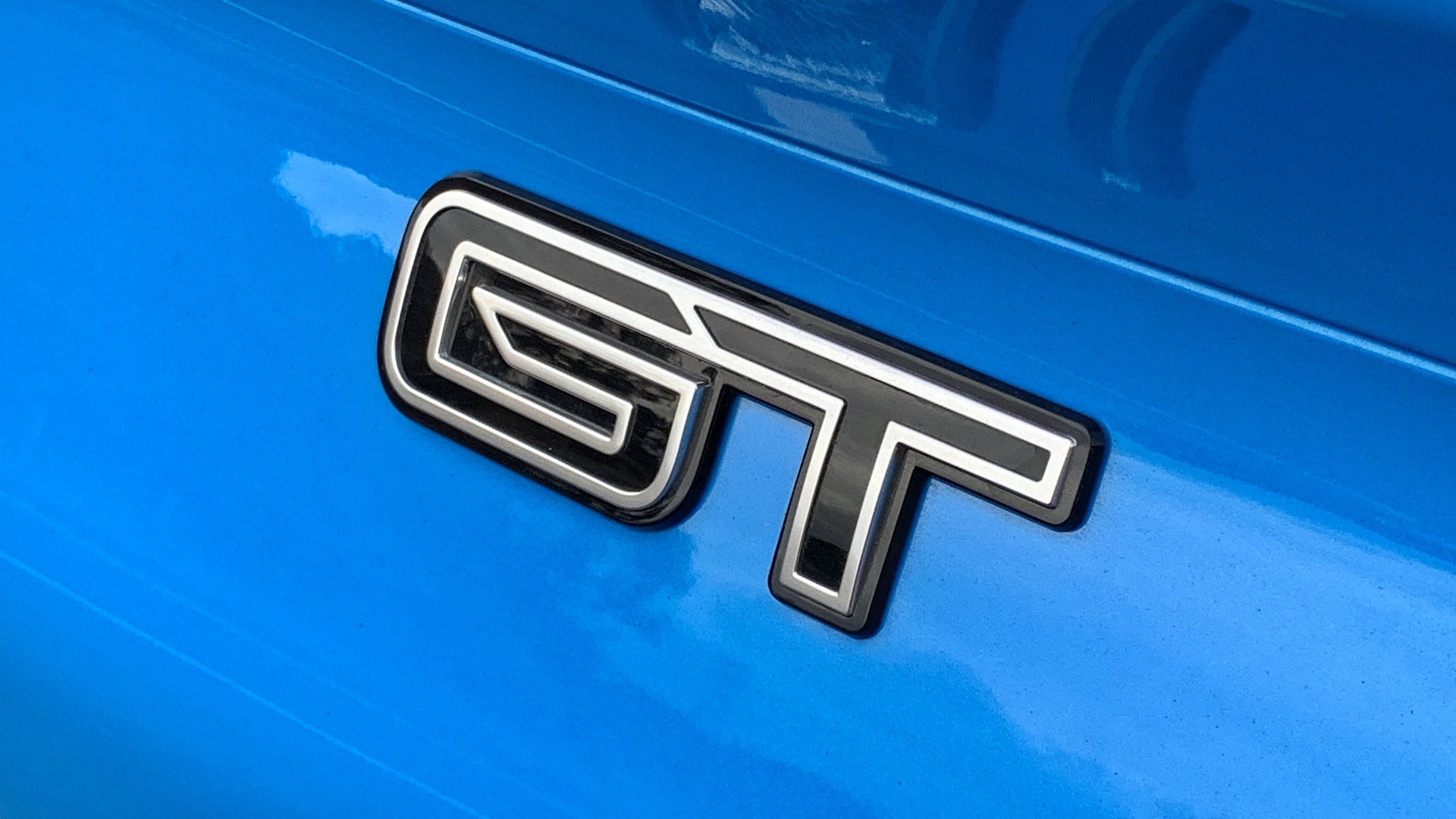 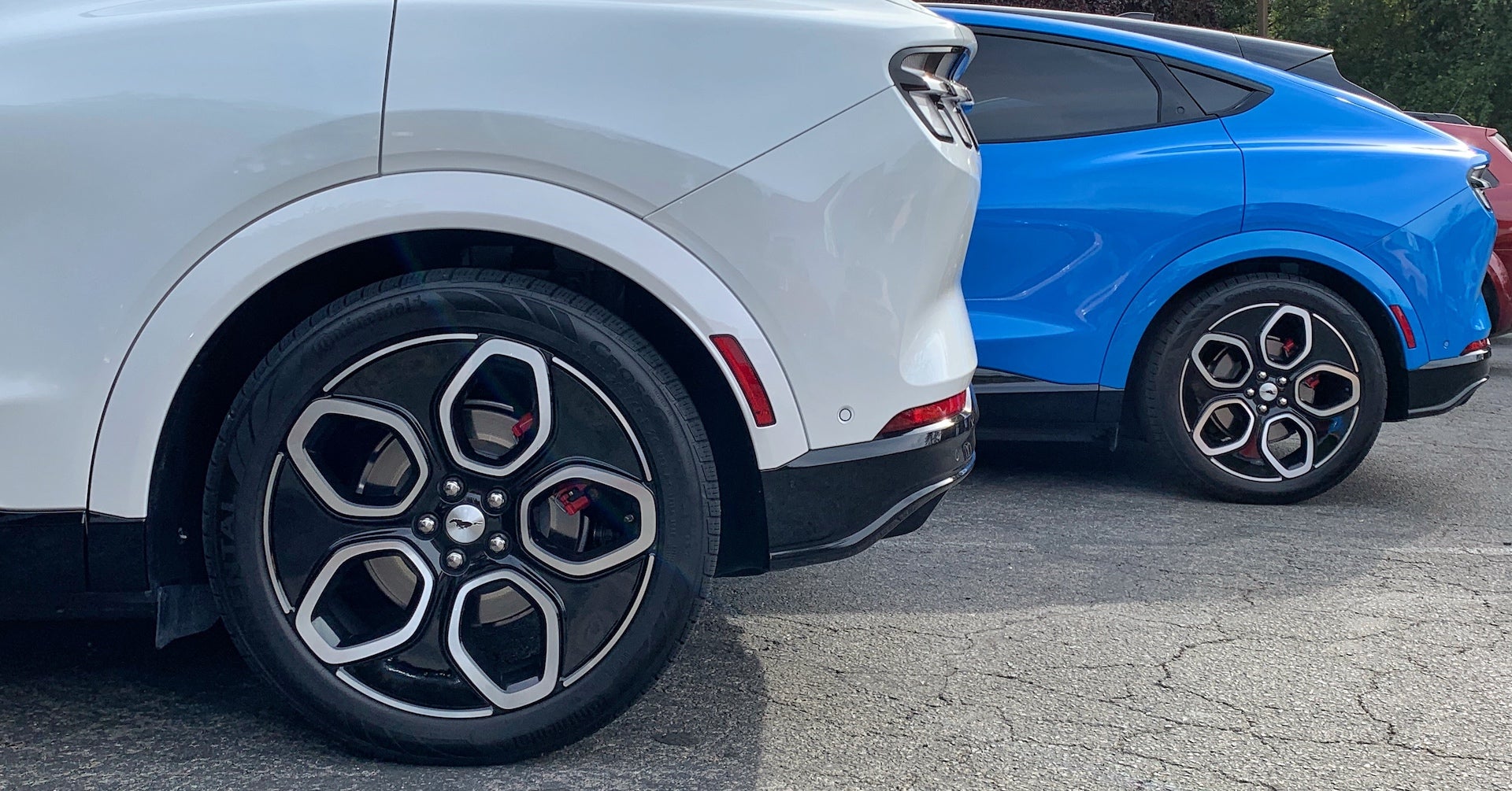 Of course, there are also performance upgrades that make the GT, well, the GT. The hopped-up electric pony sends 480 horsepower and 600 pound-feet of torque to all four wheels, a substantial upgrade from the base Mach-E’s 346 hp and 428 lb-ft of torque. In Performance Edition trim, the horsepower figure remains the same but torque is upped to 636 lb-ft. The end result is zero to 60 in 3.8 seconds for the GT and 3.5 seconds for the GT Performance Edition.

Nothing can prepare you for that first stab of the accelerator. Once traffic cleared up, I gave it the beans, expecting something slightly quicker than the base Mach-E. Nope. I immediately felt like I had been roundhouse-kicked in the face, with my head getting thrown back against the headrest many times harder than I would’ve imagined.

Within minutes of being behind the wheel, I knew that Ford had nailed the GT experience here, at least in terms of acceleration.

Stepping into the GT’s cabin doesn’t immediately reveal any obvious differences over the standard model. Sure, the seats look and feel a bit sportier, but the overall design is the same. It’s not until you start driving that you quickly realize that it’s all about how the GT goes about its job of devouring tarmac. 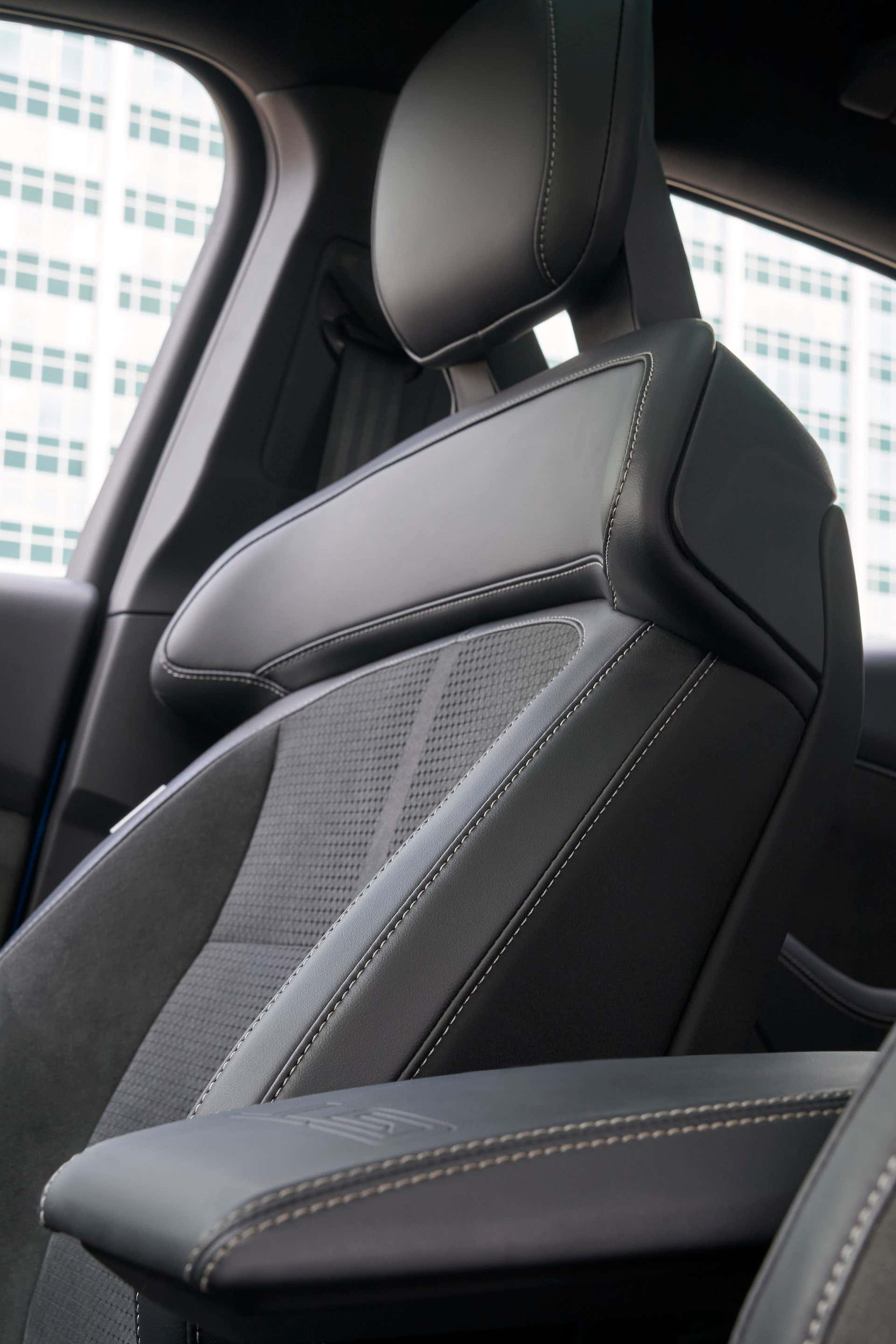 With the drivetrain set to Unbridled Mode, I set off for a 1.5-hour loop around the Muir Woods area outside of San Francisco (no doubt Ford was leaning into that Bullitt heritage with this test’s location), with rally-esque mountain roads making up the majority of the drive. This proved to be the perfect setting to test the handling characteristics of the GT, while occasional straightaways allowed for heavy, albeit brief, acceleration stints.

Right away the amount of power produced by the tweaked-up dual electric motors was staggering, so much so that there were very few instances where I could really bury my foot in the accelerator. Much like in a rear-wheel-drive V8 Mustang, the GT commanded respect and skill when attacking mountainside twisty roads.

Pedal modulation in the torquier Performance Edition seemed like a bit of an issue at first, with power delivery feeling a bit like an on-off switch. I got the hang of it the more time I spent in it, and by my second day driving it—this time at an autocross course—things felt much smoother and much more natural. Be warned: It takes time to understand this thing’s lightning-quick reflexes and acceleration. 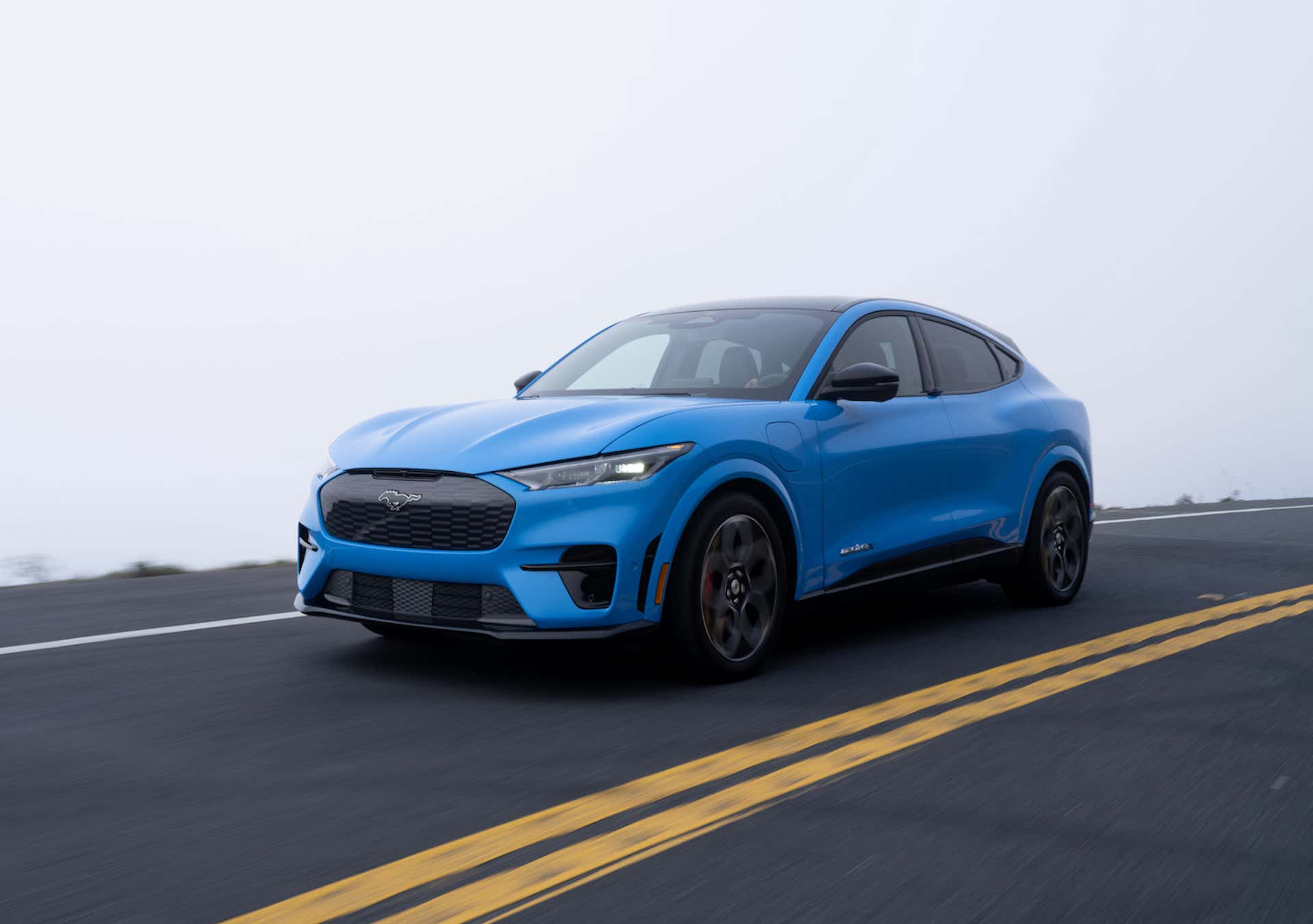 In the non-Performance GT, however, the learning curve didn’t seem as steep, with pedal inputs feeling less abrupt. Another key differentiator between the GT and GT Performance Edition is the suspension, with the latter offering standard MagneRide adaptive dampers—a technology known to work wonders on Mustangs and various other high-performance cars. Regardless of which model you choose, though, both sit 10mm lower than the regular Mach-E.

Steering, much like power delivery, is also very very quick. Diving into a corner happens with a lot less effort than a traditional crossover given its low center of gravity. As a result, you’ll find yourself constantly making adjustments throughout the corner due to the vastly different handling characteristics.

A major highlight of any Mach-E, base or GT, is certainly its balance; it’s neutral. Sure, push hard enough (especially on an autocross course) and you’ll get the nose to dive in and understeer into oblivion, but this is literally no different than any other vehicle. The GT feels light and nimble when tackling corners at a speedy and steady pace.

The brakes are also upgraded in both GT models, with 385mm ventilated front rotors and 316mm solid rear rotors working in conjunction with high-performance calipers—which of course are painted red. The Performance Edition takes things up a notch with Brembo calipers as standard. 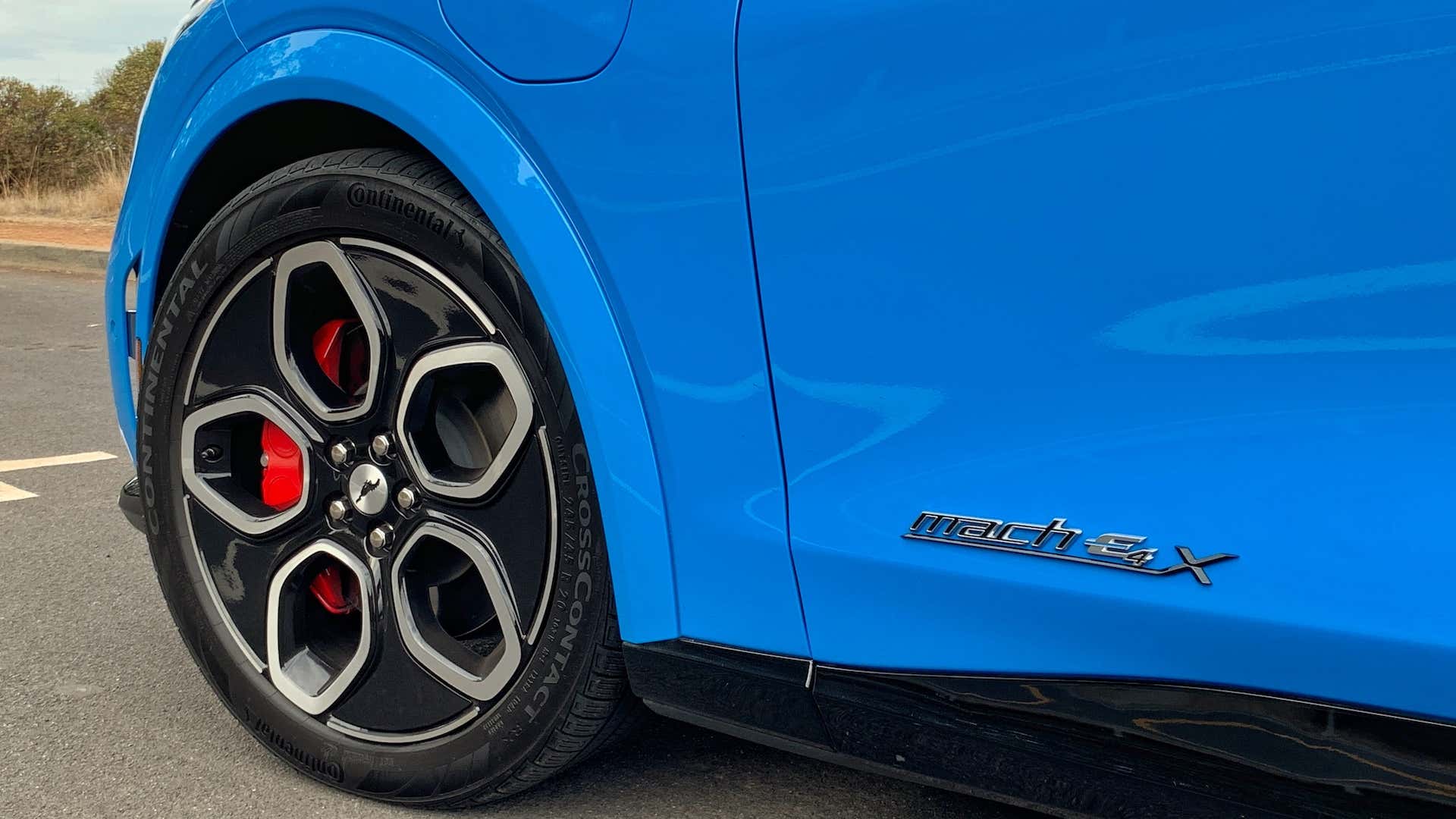 Once you get familiar with the vehicle’s dynamics (and if you have an idea of what you’re doing), you’re rewarded with a crossover that handles extremely well given its size and weight. Remember, this ain’t a Miata, but it could certainly upset a few AMG, M, and even Porsche SUV owners in the twisties.

Away from the devilishly fun mountain roads, however, both GT variants felt relaxed in city traffic and on the highway. Perhaps it’s here that the differences between the base-model Mach-E and both GTs weren’t as obvious. All three models offer plenty of comfort and tech with which to commute with ease.

Overall, the gap in performance between the base model and the two GTs can only be described as vast. If you really break it down, you could say that the disparities between the two models are exactly alike the actual Mustangs, where the EcoBoost isn’t exactly a slouch but it’s nowhere near as fun and involving as the GT. It’s exactly the same thing here. 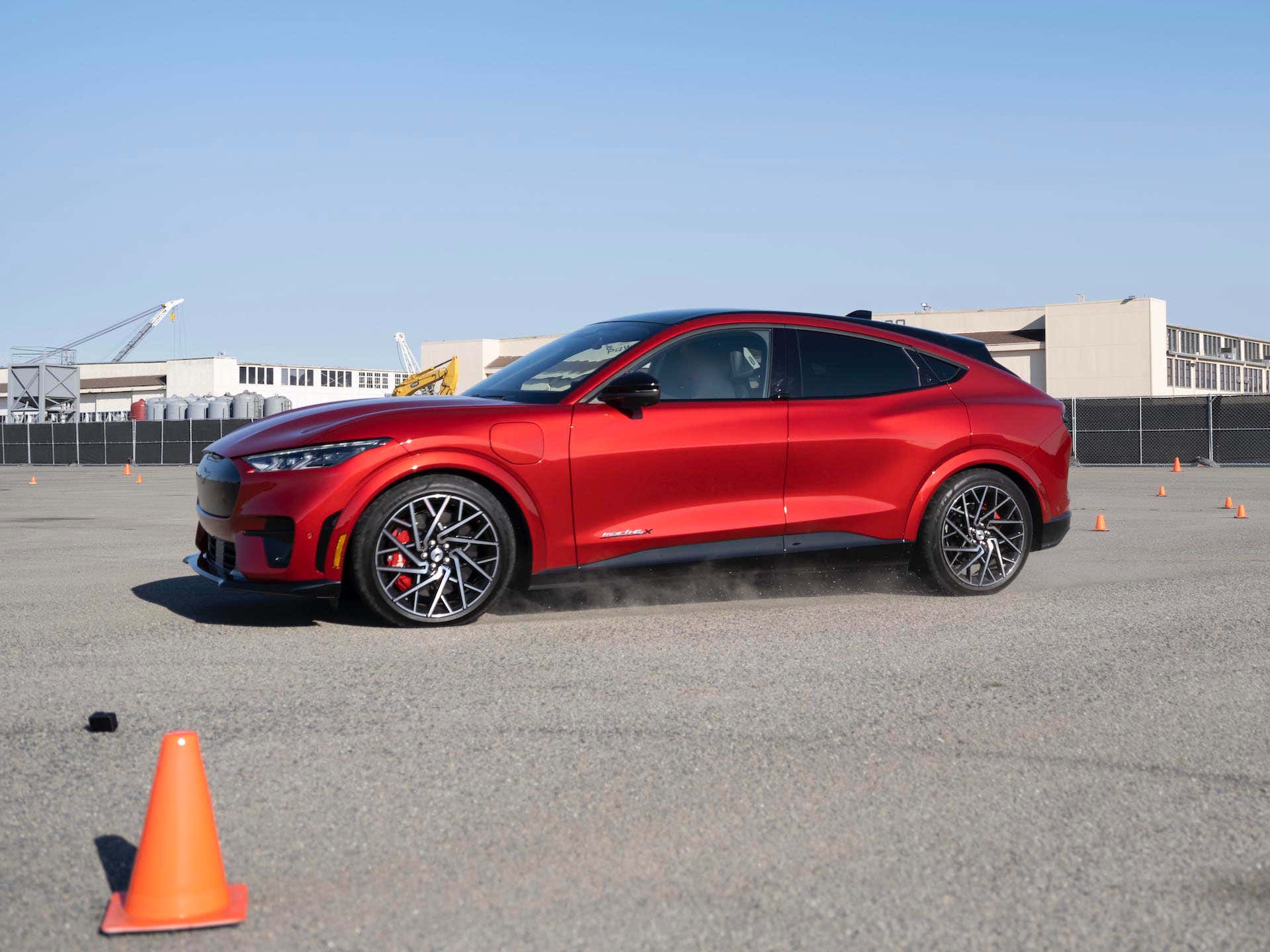 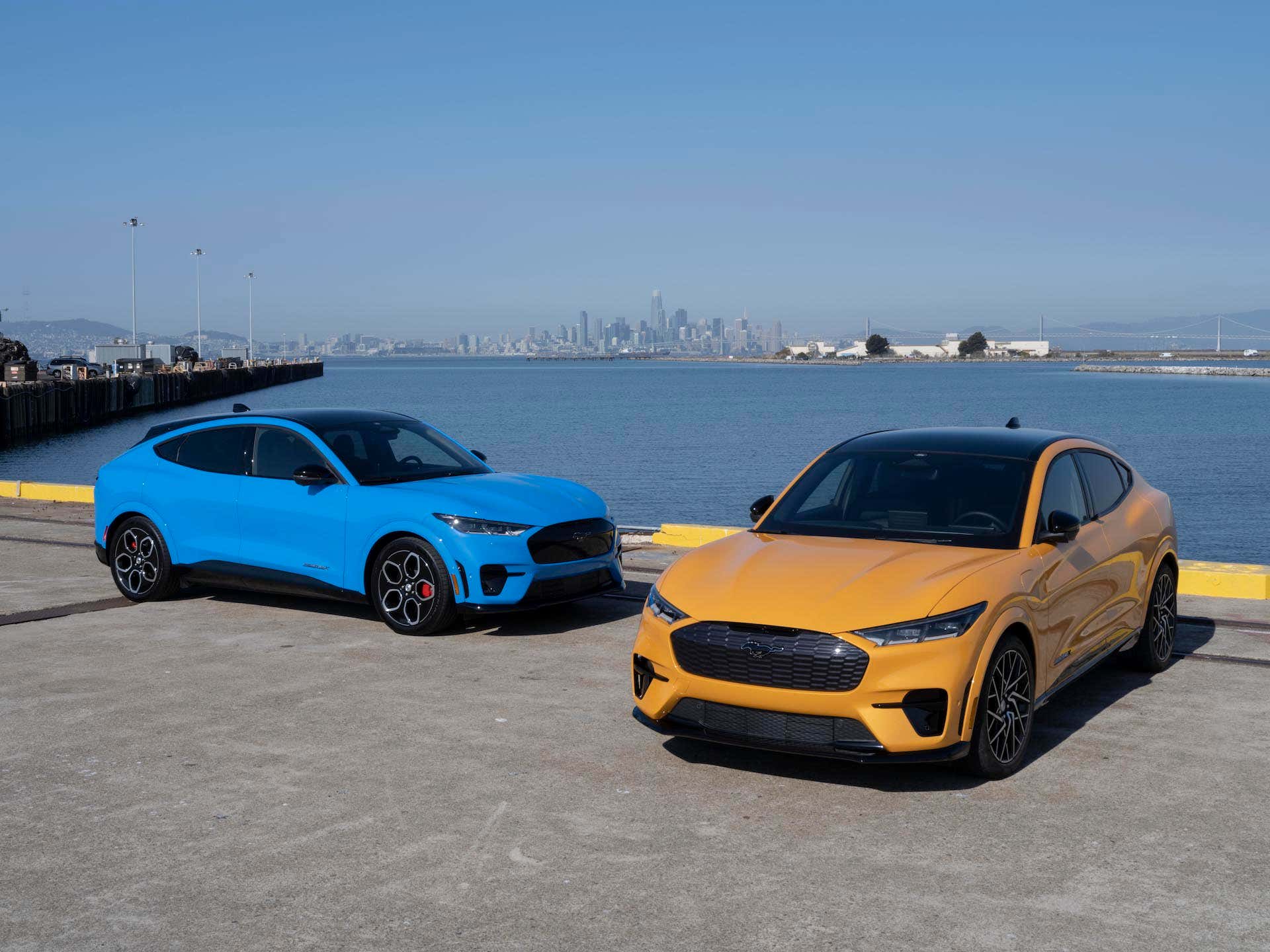 I’m not sure how it’s done it, but Ford’s created three uniquely different Mach-Es with three very different attitudes. My appreciation for the base Mach-E is no secret, so let’s dive into the new performance variants.

The Mach-E GT is really the sweetheart of the bunch. I believe this should’ve been the first Mach-E to roll out. I’m not sure it would’ve won over more customers, but it certainly would’ve silenced a few keyboard warriors claiming “It’S NoT a MuStAnG.” Plus, it just feels like a Mustang. It’s fun, it’s fast, and it offers the right balance of practicality and performance. I don’t care that it doesn’t have MagneRide and that it has less torque and a slower zero to 60 mph time. None of those things made me enjoy my time behind the wheel any less. It made me smile. And this has always been the ethos of the Mustang at its core.

The Mach- E GT Performance Edition is a beast. No, it’s not as crazy-quick as an upper-end Tesla or Porsche Taycan, but its price tag is five figures long and starts with a six and those other cars cannot claim that. It’s got the goodies to move very quickly and look good while doing so. It’s a blast to drive on the track and can mask its weight slightly better than the regular GT due to its fancy suspension setup. With that said, it can feel a bit stiff at times and the power delivery can be so abrupt that it may take some time to get used to.

Whether you’re a first-time EV buyer or an EV veteran, you’ll appreciate the simplistic approach that Ford has taken with the Mach-E. I know I do. It’s just a normal, fun crossover that happens to be electric. And in the case of the GT, it’s quick as hell, too.

Email the author at [email protected] 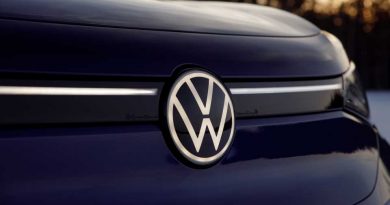 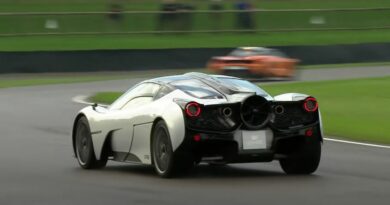