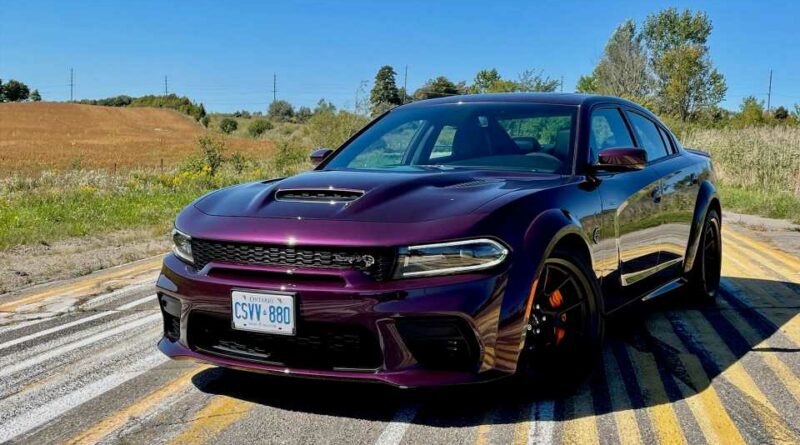 I have a not-so-shocking confession to make: Muscle cars have never really been my bag. I like high-strung Hondas, low-slung Miatas, carbon-laden BMWs, and was always more Team Paul Walker rather than Team Vin Diesel. To me, a fast car is only worth a damn if it’s fast in the corners, not just fast in a straight line, and the whole premise of American muscle has always come off as just a little bit… dumb. (And as one of The Drive‘s small handful of non-American contributors, I was always comfortable holding this view without feeling treasonous.) After driving the 2021 Dodge Charger SRT Hellcat Redeye, however, things have changed a bit.

I get it now. The noise, the drama, the relatively messy, unfiltered speed. The appeal has presented itself and is now fully understood. What’s more, I don’t have to feel guilty or embarrassed by my love for the Hellcat because it’d only be patriotic. You see, despite this car being American AF in every spiritual sense, it’s actually Canadian if we’re going by birth certificate rules. Yep, as indicated by the “2” that heads up its VIN, this Dodge Charger was built right here in Brampton, Ontario. 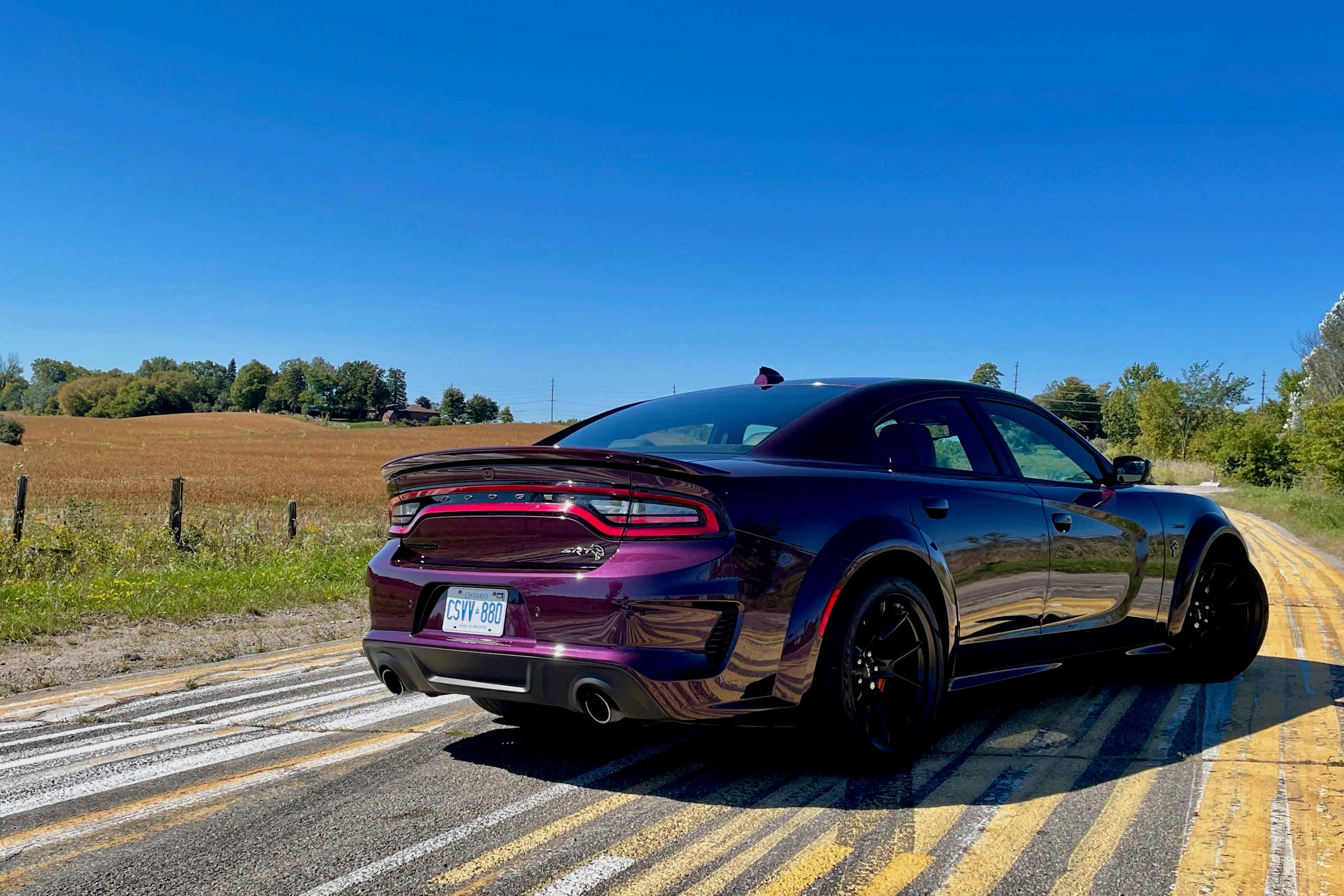 [All price figures in CAD unless otherwise noted.]

Riding on the prehistoric seventh-gen Charger that debuted in 2011, the 2021 Charger Hellcat Redeye takes the already insane Charger Hellcat and gives it wider fender flares and a new hood, complete with a scoop. But what’s under that hood is what matters most.

Like any other red-blooded muscle car of note, the Redeye’s centerpiece is undoubtedly its engine. Specifically, a 6.2-liter, supercharged Hemi V8, making 797 horsepower and 707 pound-feet of torque. The result is a four-door, police cruiser-shaped sedan that’s really friggin’ fast. Unsurprisingly, it isn’t as instantaneously quick off the line as a luxury EV or as stoically effective at bursting from a stop as a launch control, witchcraft-equipped, turbocharged M car. Instead, the Charger puts up its drag numbers via chunky 305-section Pirelli P Zero tires and a metric shit-ton of unbridled, chest-beating American ponies. 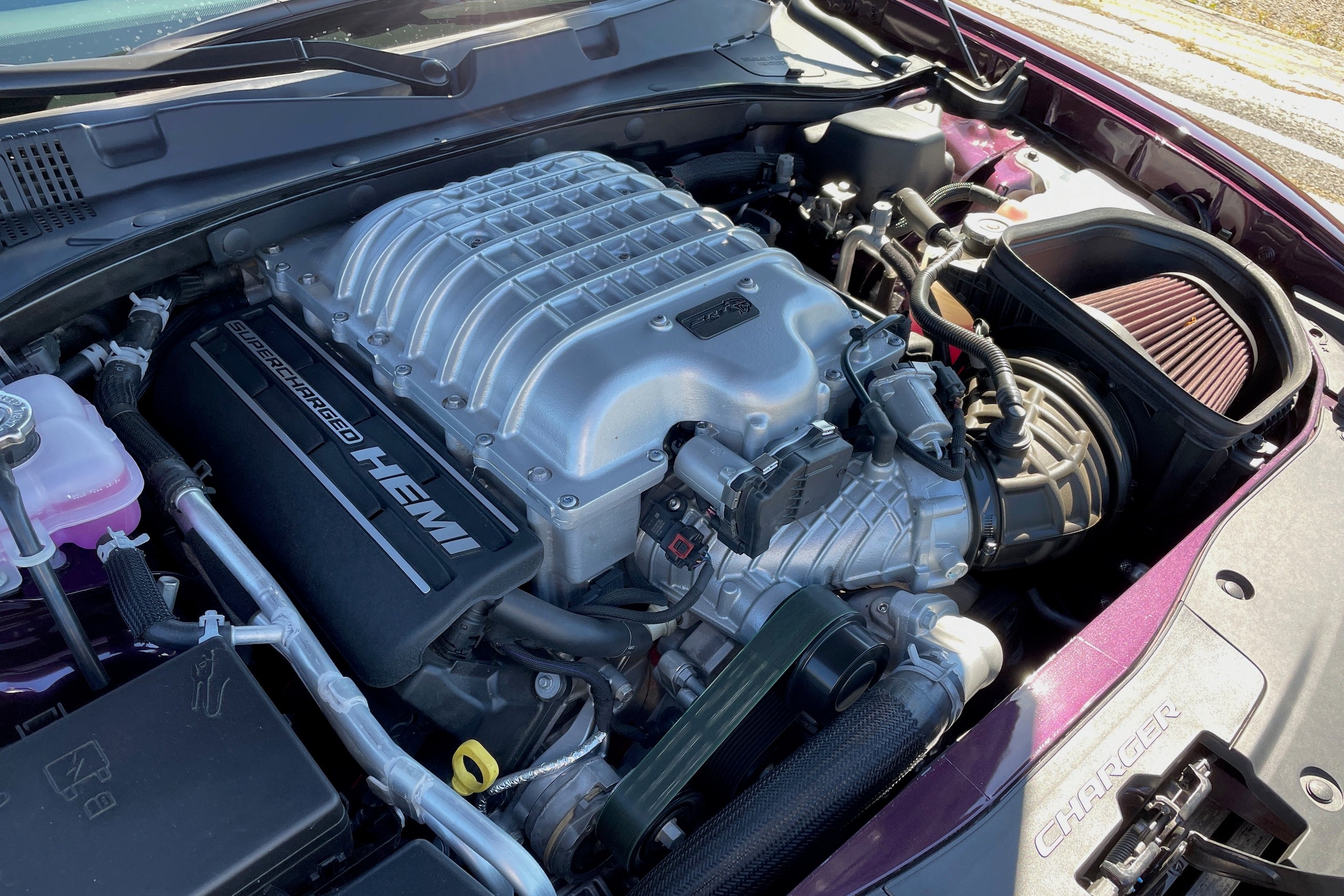 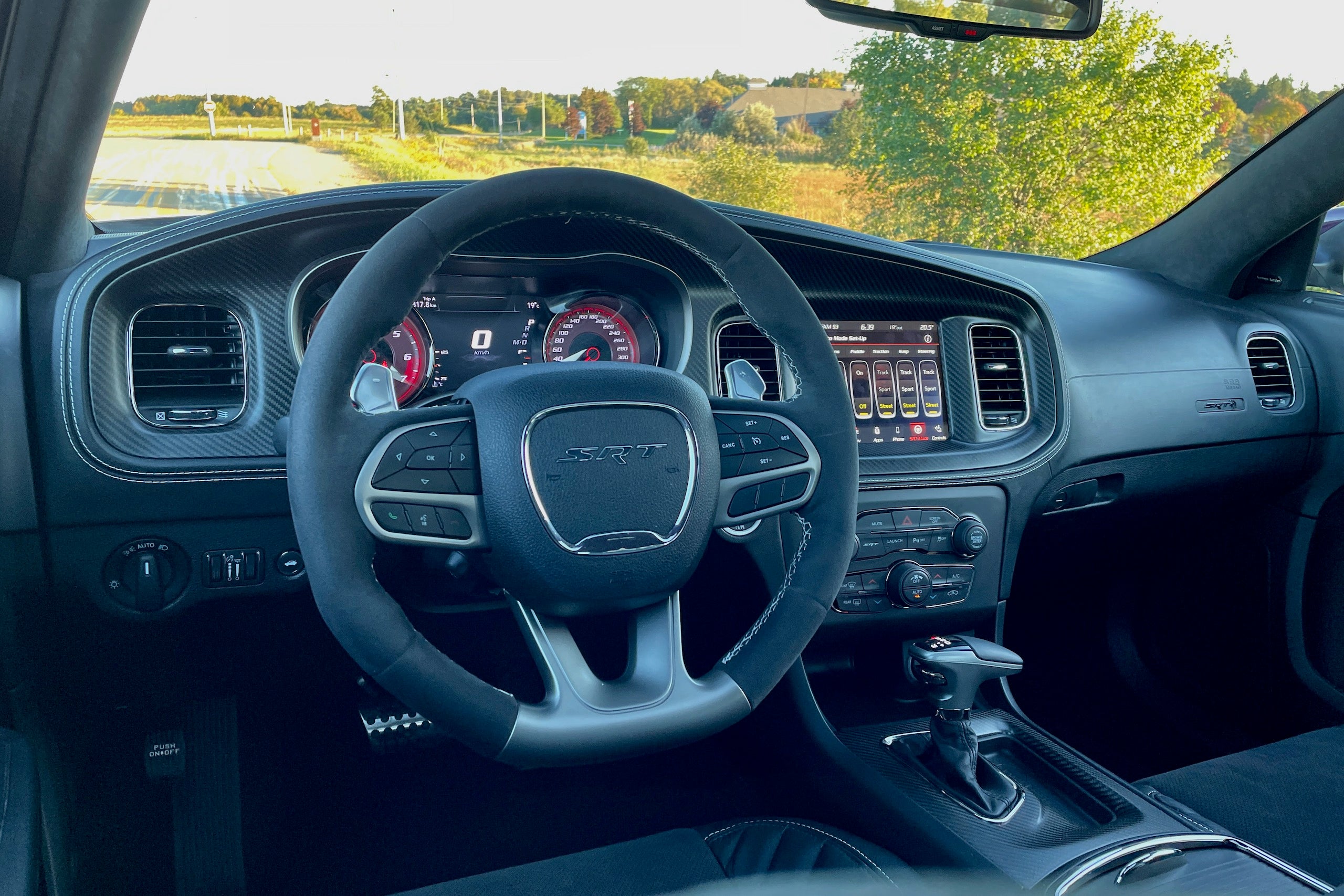 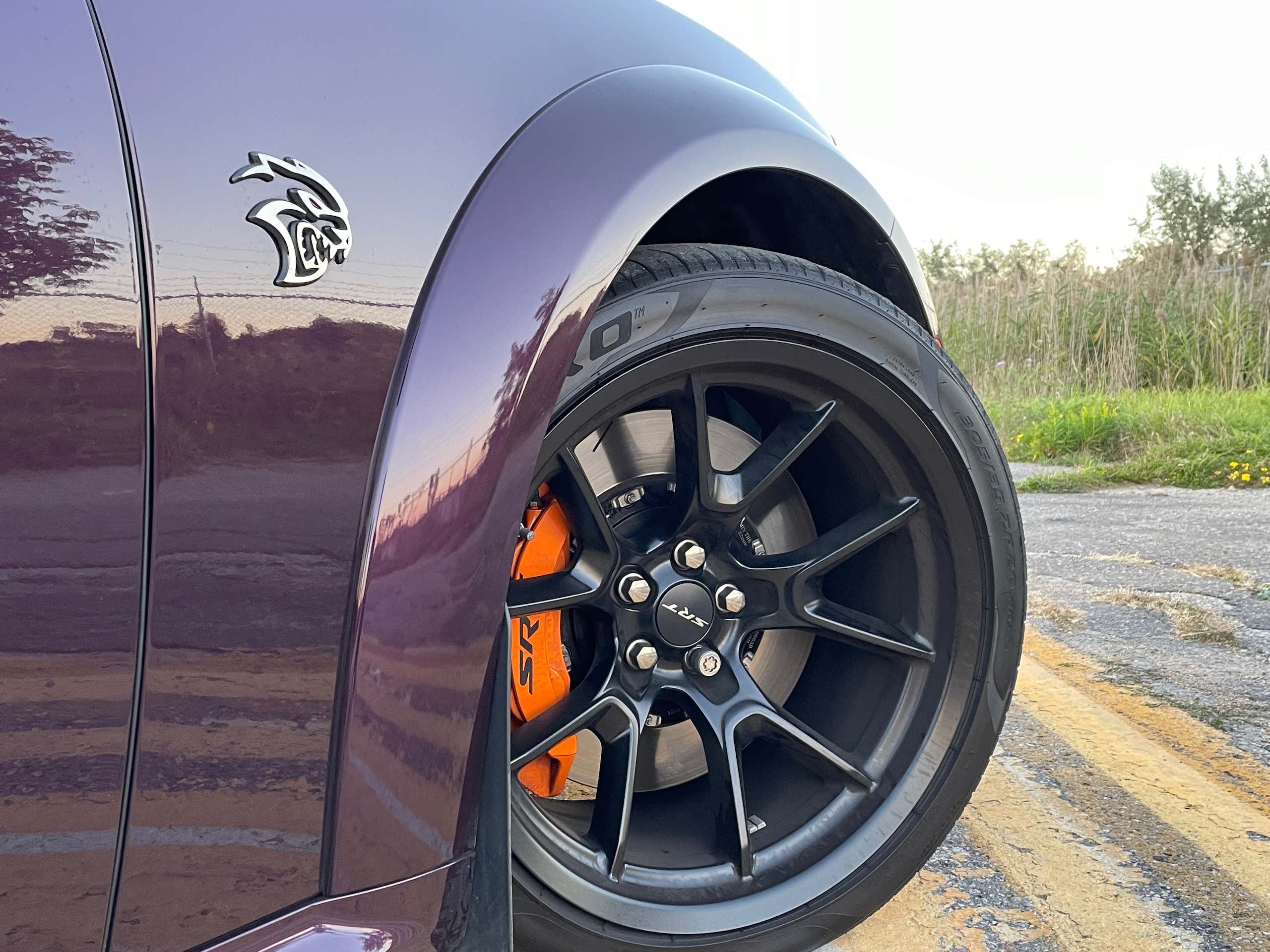 The noise, too, is a huge part of the Hellcat experience. Armed with a 2.7-liter supercharger that’s bigger than most economy car engines and provides 14.5 psi of boost, the theatrical whine that’s heard under even relatively light throttle pretty much never gets old.

However, a 797-horse muscle car that’s really fast and sounds ridiculous is hardly breaking news. What was surprising was that the Charger Hellcat Redeye actually handled quite a bit better than I imagined it would. Thanks to those same massive Pirellis and three-mode Bilstein Adaptive Damping Competition suspension that help it put all of the power down, the Redeye bullies its way through a winding road with great stability and grip. It’s no fleet-footed Miata, of course, but for something this big, heavy, and brutal in premise, you could almost call it nimble. Almost. 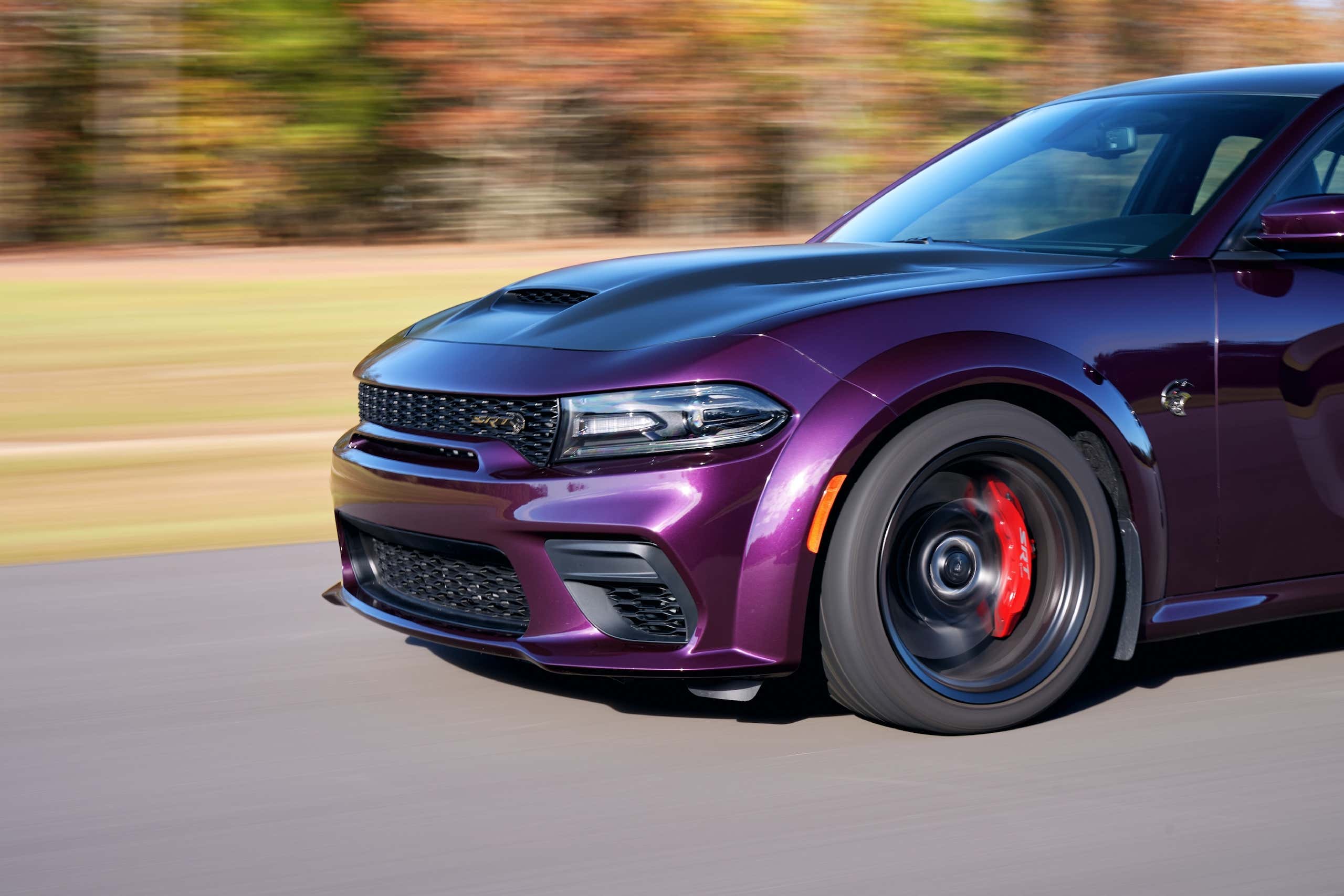 The brakes are strong (they kind of have to be) but appropriately cushy at the top of the pedal. Also fairly cushy are the seats and the Comfort-mode suspension, which make the entire thing feel like the world’s fastest living room couch. Speaking of drive modes, the ones here are some of the most useful and best-judged I’ve experienced. Altering transmission programming, traction control, dampers, and steering weight, Sport mode feels perfect for on-street spirited shenanigans, Auto calms things down to everyday-commutable levels, while Track is a little too hard-and-heavy for the street and, as its name suggests, probably best saved for the track.

Will you ever use all 797 hp on the street? No, but you will use everything else that 797 hp comes with, such as 797 hp-compatible brakes, a chassis and suspension setup that can cope with that magnitude of grunt, and steering that’s strong enough to rein it all in. Don’t get me wrong, the Hellcat Redeye still demands to be driven with respect if you’d like to keep its tires to the road—but as long as you do that, the car feels buttoned-down, accessible, and almost easy to hustle around corners. 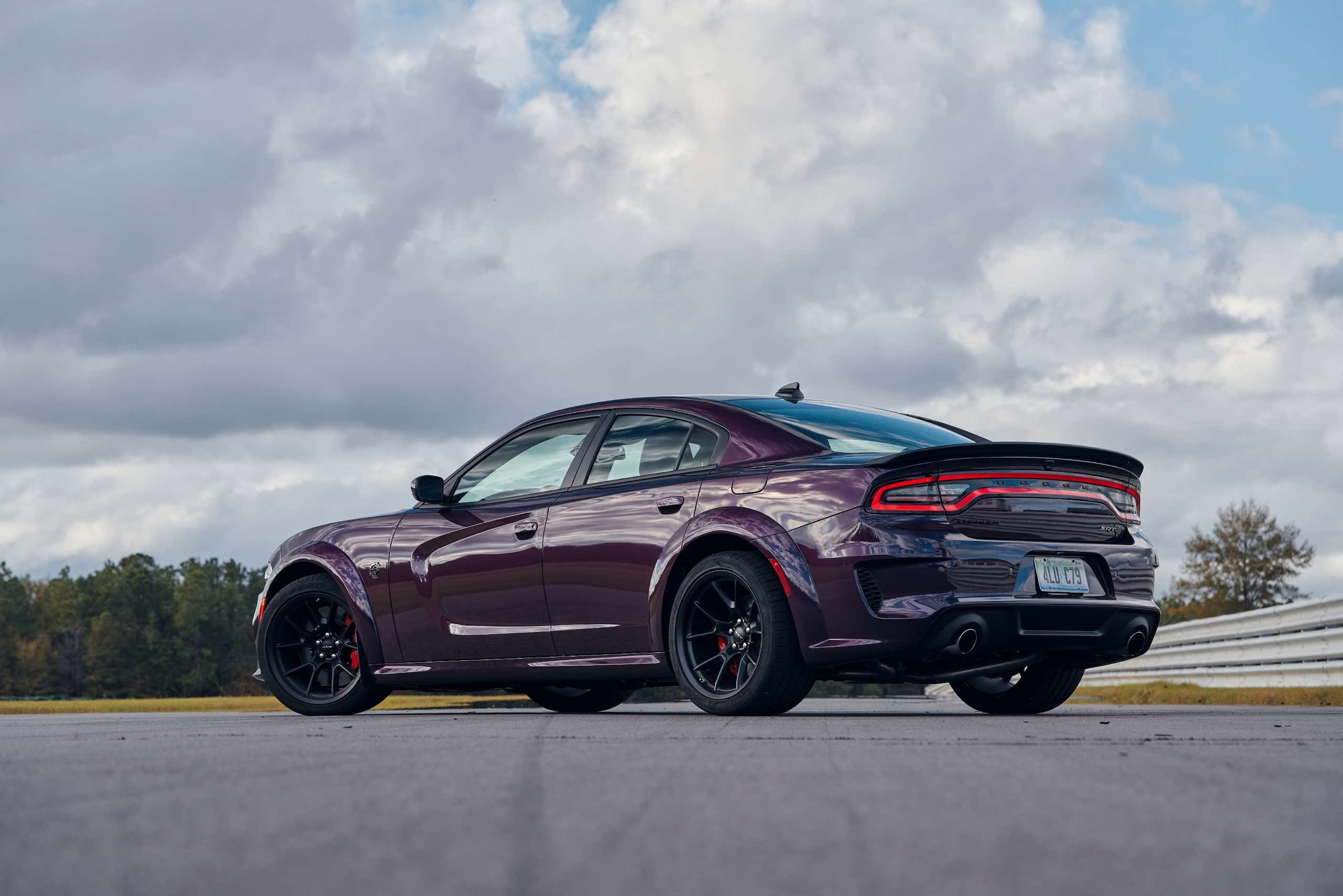 That said, big straights are still, at the end of the day, where this car is happiest. Once the road—and throttle—open up, the big Hellcat is BMW M5-level quick while being about two magnitudes more dramatic. That high-pitched whine that was a fun novelty pulling away from stoplights around town is now a lethal-sounding treble atop a bassline of booming, nasty, iron-forged, American V8 fury. It’s threateningly loud and has the personality of an old wartime contraption whose only purpose in life is to maim, frighten, and destroy.

And I love it.

It makes me laugh in a way that lighter, tighter, more “sophisticated” performance rides just do not. The Charger Redeye may not exactly be the devastating and unhinged handful that I expected it to be, but driving it still felt like… I was getting away with something. Given all of the world’s issues surrounding climate change and road safety, being able to still legally sell a 797-horse, rear-wheel-drive family sedan to anyone who can write a big enough check feels like both a big middle finger to and an oversight on the part of the world’s worrywarts and governing nannies. It’s one of the finest examples of automotive indulgence there is.

The fact that the Hellcat is based on a car that’s also widely used as a police cruiser is just the deliciously ironic cherry on top of this gloriously anti-authoritarian cake. As somebody who staunchly believes that the best-tasting desserts are the ones you aren’t supposed to eat, I’m extremely glad the Redeye exists and that I got to enjoy it while it’s here. 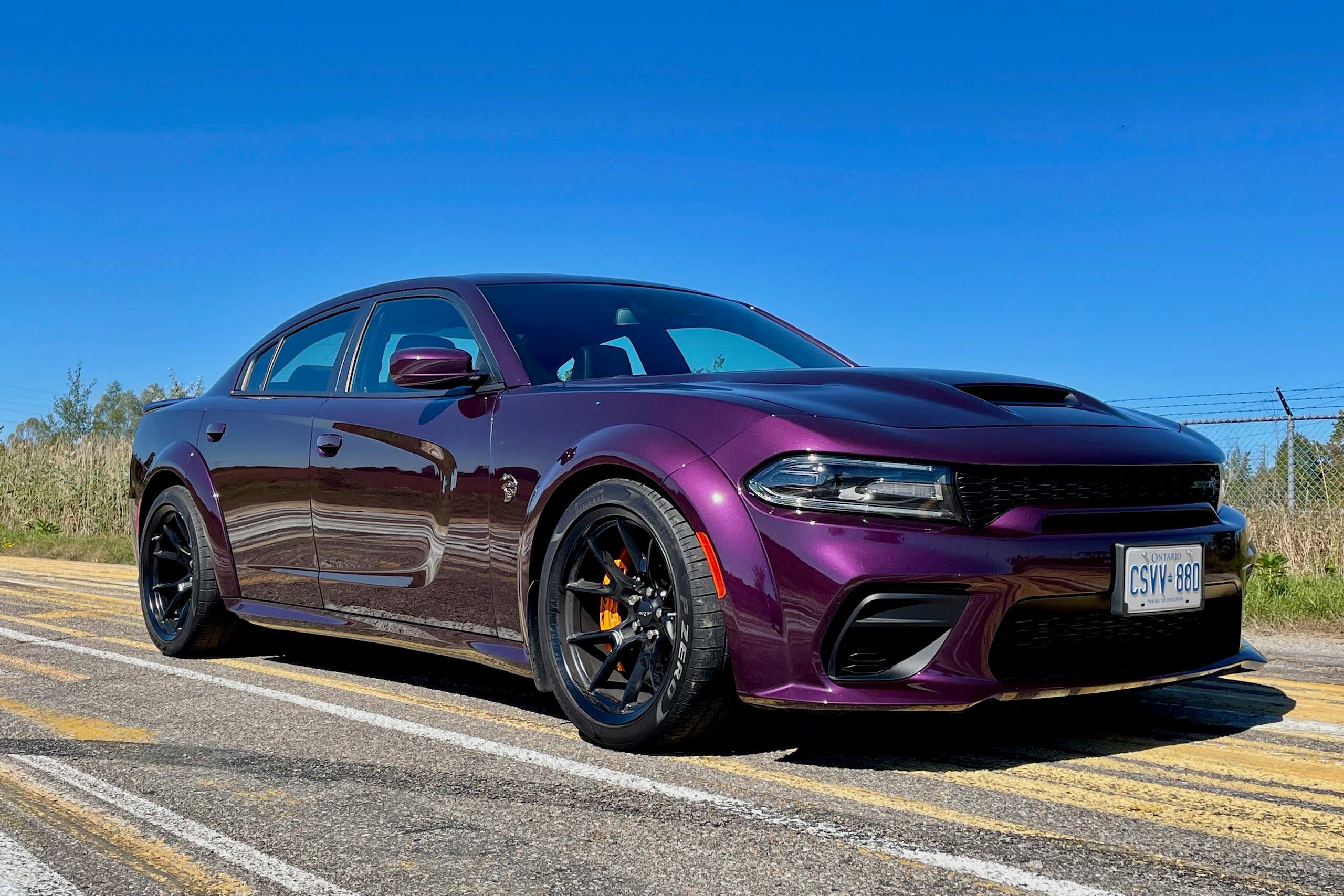 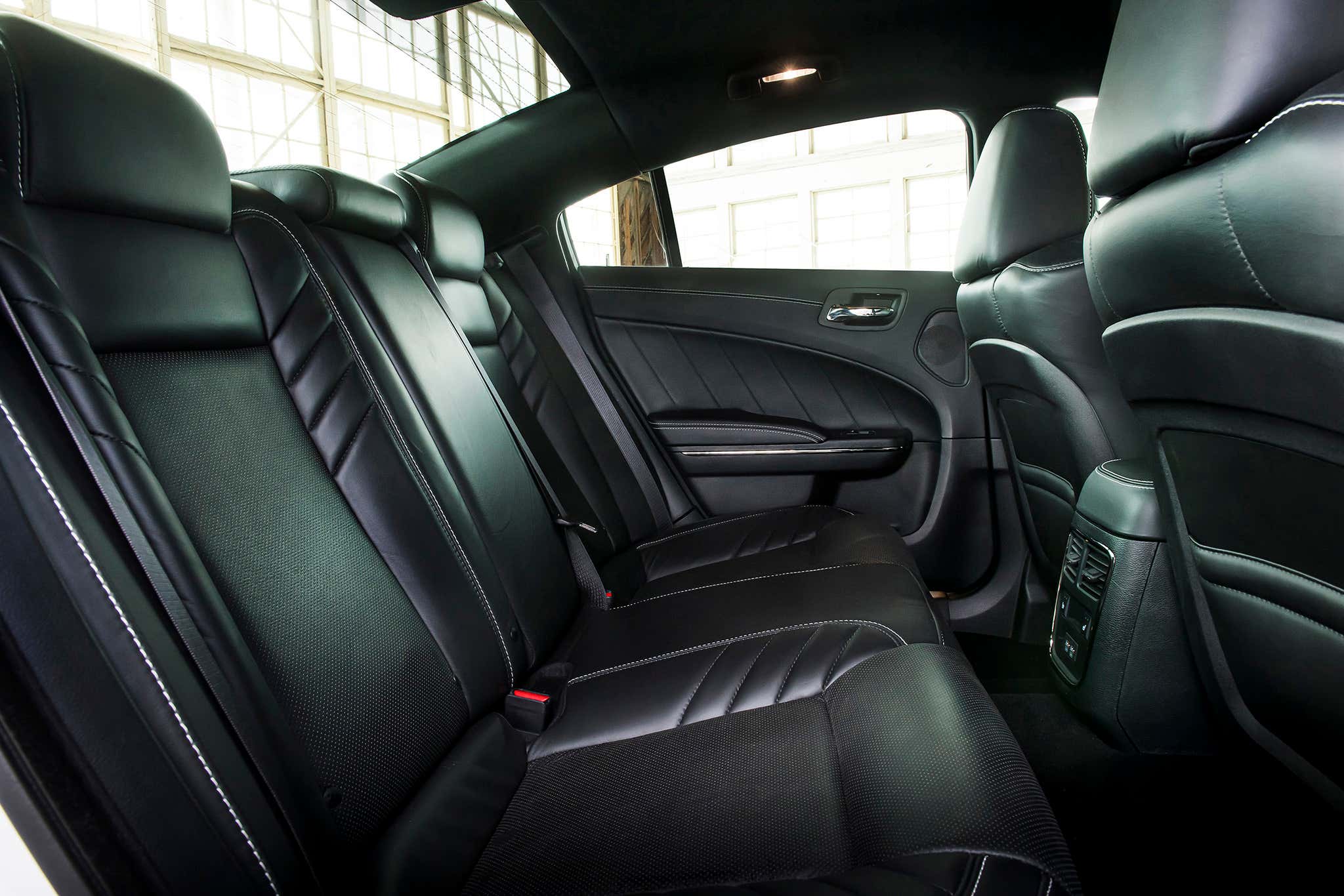 This is not to say the Charger Hellcat Redeye doesn’t have its fair share of objective flaws, of course. Its sheer size, atrocious turning circle, and steering that does not get light enough at low speeds make it big, unwieldy, and exhausting in parking lots, while its interior finishes are indeed more Grand Caravan than Grand Wagoneer. And I feel like the frequency at which that 15 mpg combined will force you to visit the pump would get old pretty quick.

Starting at $87,515 CAD, the Charger Hellcat Redeye isn’t exactly cheap to buy either. The purple—excuse me—Hellraisin press unit you see here came equipped with the $18,000 Customer Preferred Package that includes 20-inch lightweight aluminum wheels and an SRT Power Chiller, $1,495 worth of interior carbon and suede, $650 of Alcantara, the $795 built-in navigation and satellite radio pack, $1,500 of Harman/Kardon audio, and a $1,495 sunroof. When all was said and done, the sum at the bottom of the window sticker came out to $116,685 CAD. 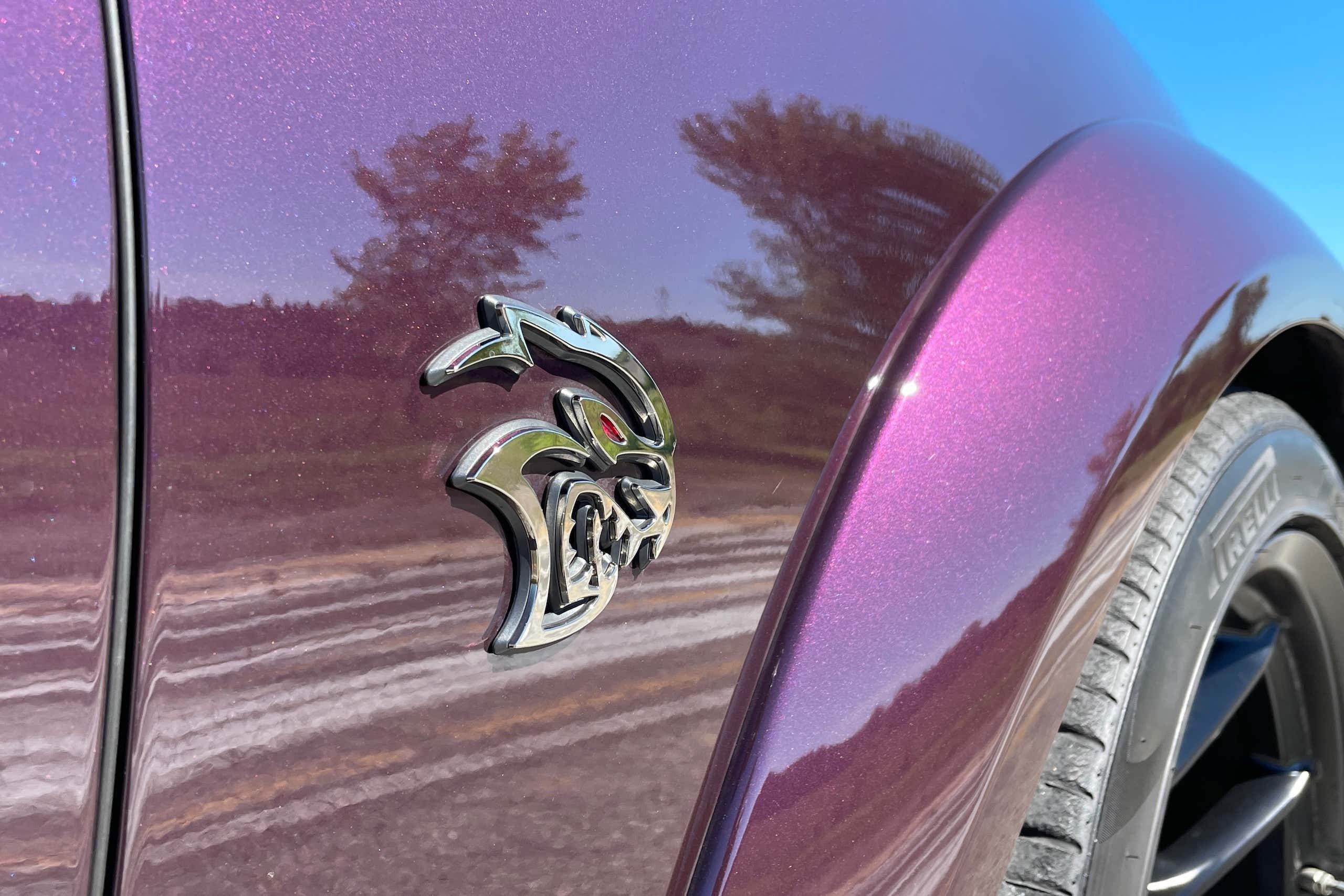 Got a tip or question for the author about the Charger Hellcat Redeye? You can reach him here: [email protected] 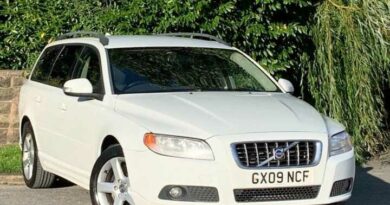 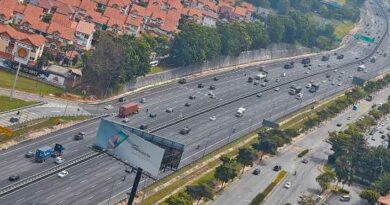 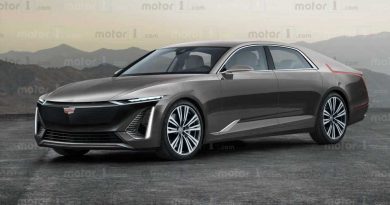