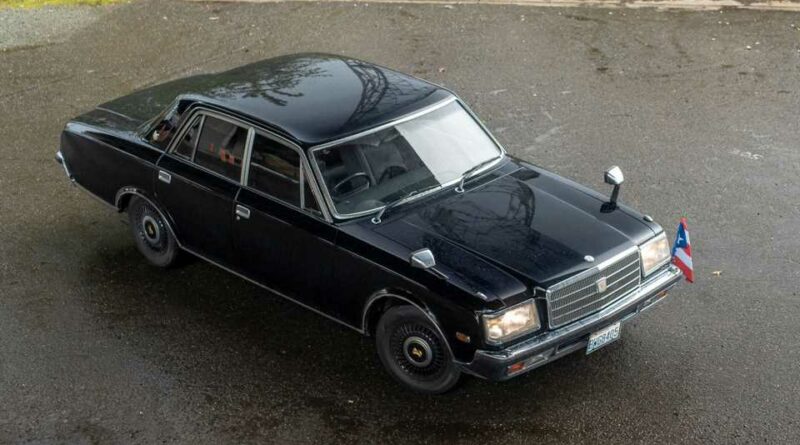 For most Westerners, one look at the all-black sedan won’t tell you much. The trunk proclaims it is a “Century,” but there are no manufacturer badges emblazoned on it; all it bears is a curious golden phoenix on its hood and center caps. Looking more closely, even the era is hard to place. The squared-off tail lights scream the ’80s, the front grille suggests a few decades earlier, and the overall stately lines and extremely restrained design give it a timeless quality.

But in its domestic market, this is the pinnacle of Toyota’s offerings—and a legendarily luxurious one at that. This is a 1995 Toyota Century, and it projects power and wealth in a way that no other car could dream of in Japan. 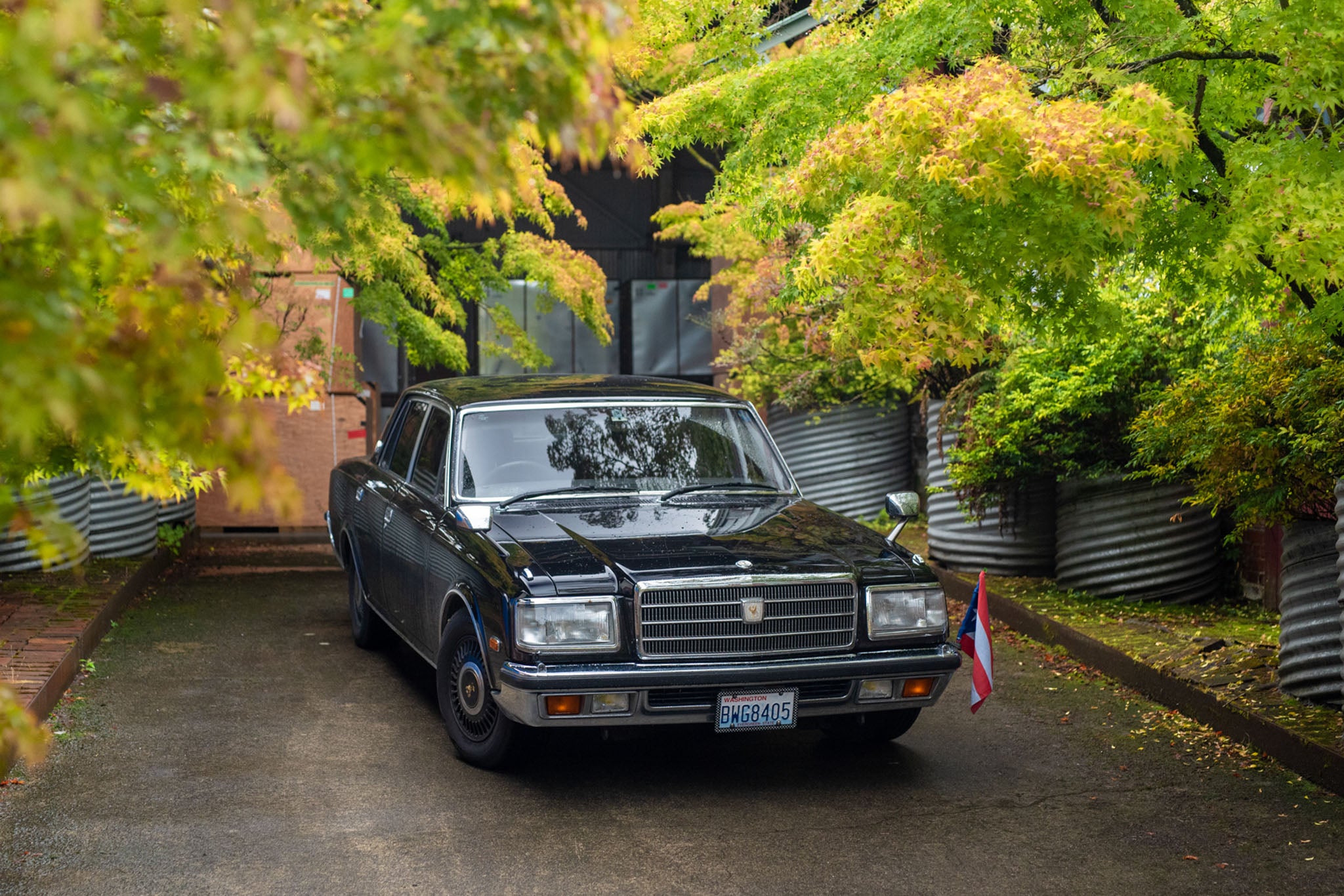 The Toyota Century line hearkens back to the relative infancy of the Japanese auto industry, with the first generation debuting in 1967. It offered something that Japanese automakers had been unable to provide in the relatively impoverished years of rebuilding after the destruction of World War II: true domestic-market luxury. In the initial years of Japan’s manufacturing recovery, the focus was on reliable, inexpensive commuter vehicles and work trucks. VIPs—even the Emperor of Japan, who owned a Cadillac Series 75 in the post-war era—relied on exported American V8 sedans to be ferried about.

By the mid-’60s, however, as the economy and country recovered from the scars of the war and Japan started its ascent towards a global powerhouse yet again, a few manufacturers began to dip their toes in the luxury market. By 1965, there were a handful of American-style, high-end V8 sedans on offer. Toyota’s Crown Eight debuted in 1964 and Nissan’s Prince Royal and President models offered a V8 option in 1965. But the Crown Eight never gained much traction as it shared a nameplate and appearance with the mundane, taxi-service-relegated base model Crown, and was discontinued shortly after introduction. 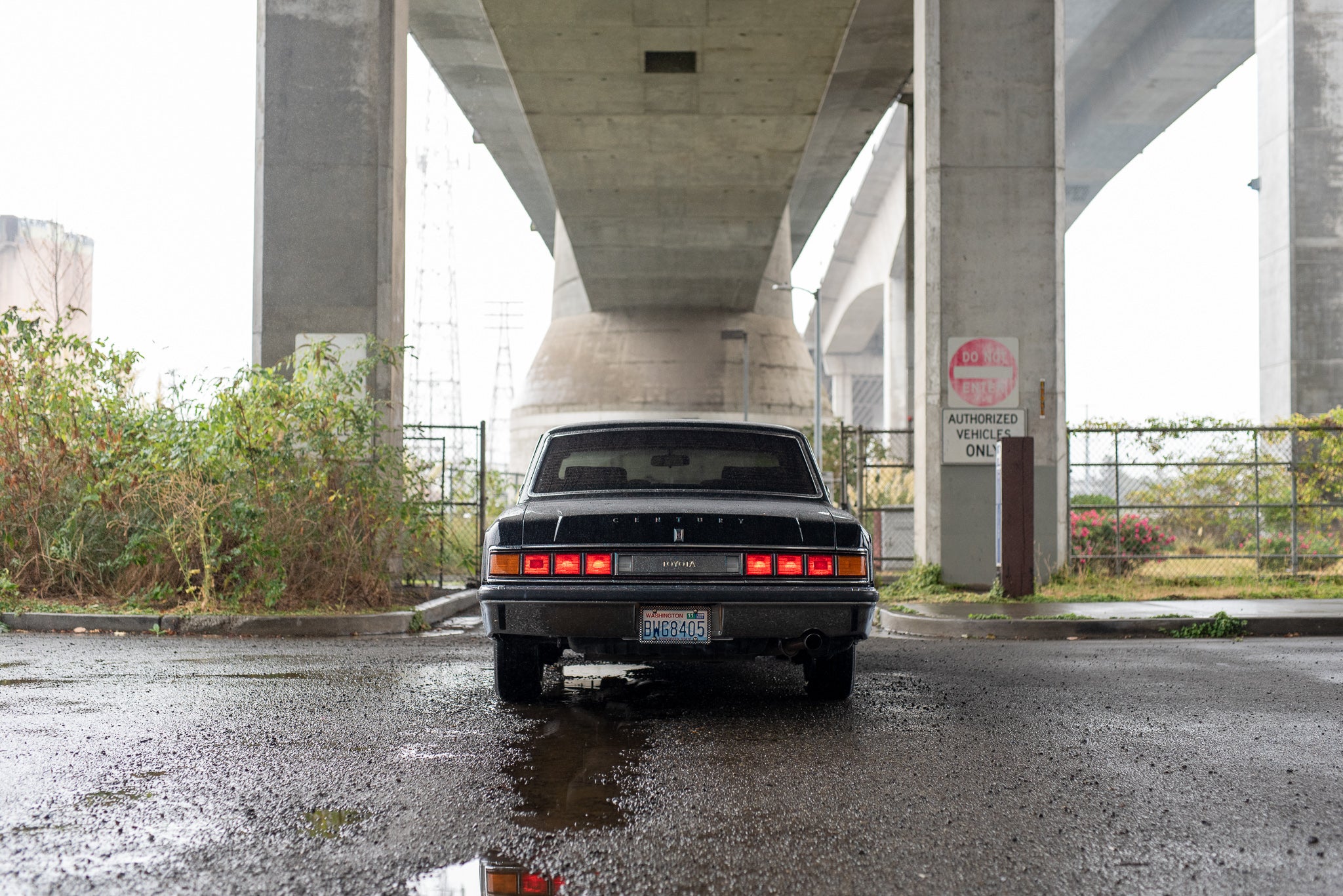 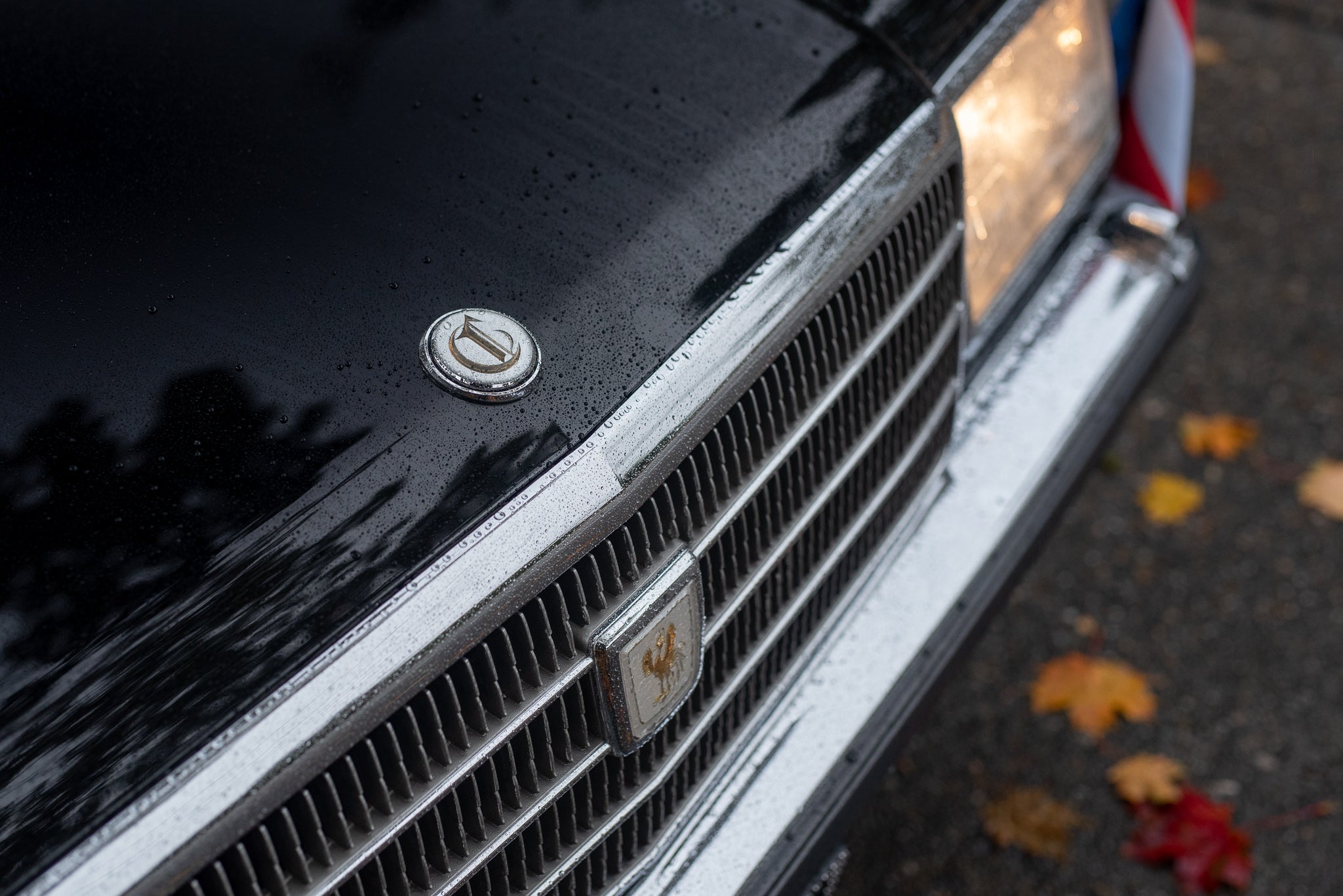 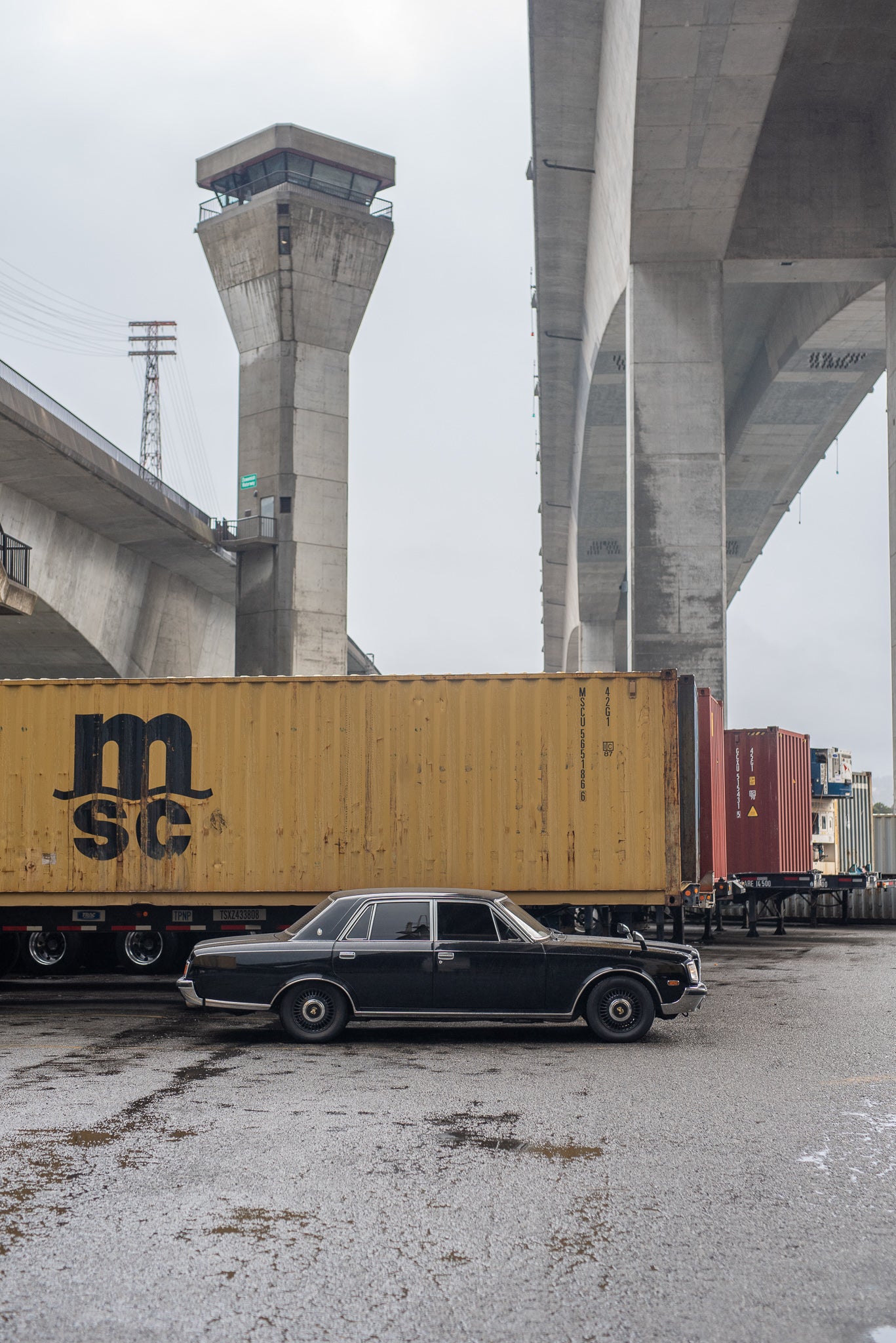 To replace the Crown Eight, Toyota introduced the Century. It was a bespoke platform with a bespoke motor to match—a true hemispherical-head V8, co-developed with Yamaha, never shared with any other Toyota product—and it immediately distinguished itself from the rest of the Japanese market with its comfort and features.

Very rapidly, it became the vehicle of choice for the chauffeured class, from the very upper echelons of the Diet and corporate life to the less-than-glamorous kingpins of the Japanese yakuza. Its image became so indelibly associated with high status in Japan that the car I drove through the streets of Seattle, despite coming out nearly 30 years after the debut of the Century, is still a first-generation car. The Century did not receive a new platform until 1997 because its presentation and mystique were so sought-after that to change it was anathema to its buyers.

And so, the timeless styling is a very intentional design. No matter what build date your Century heralds on its VIN plaque, it will roll off the factory line looking like old money. 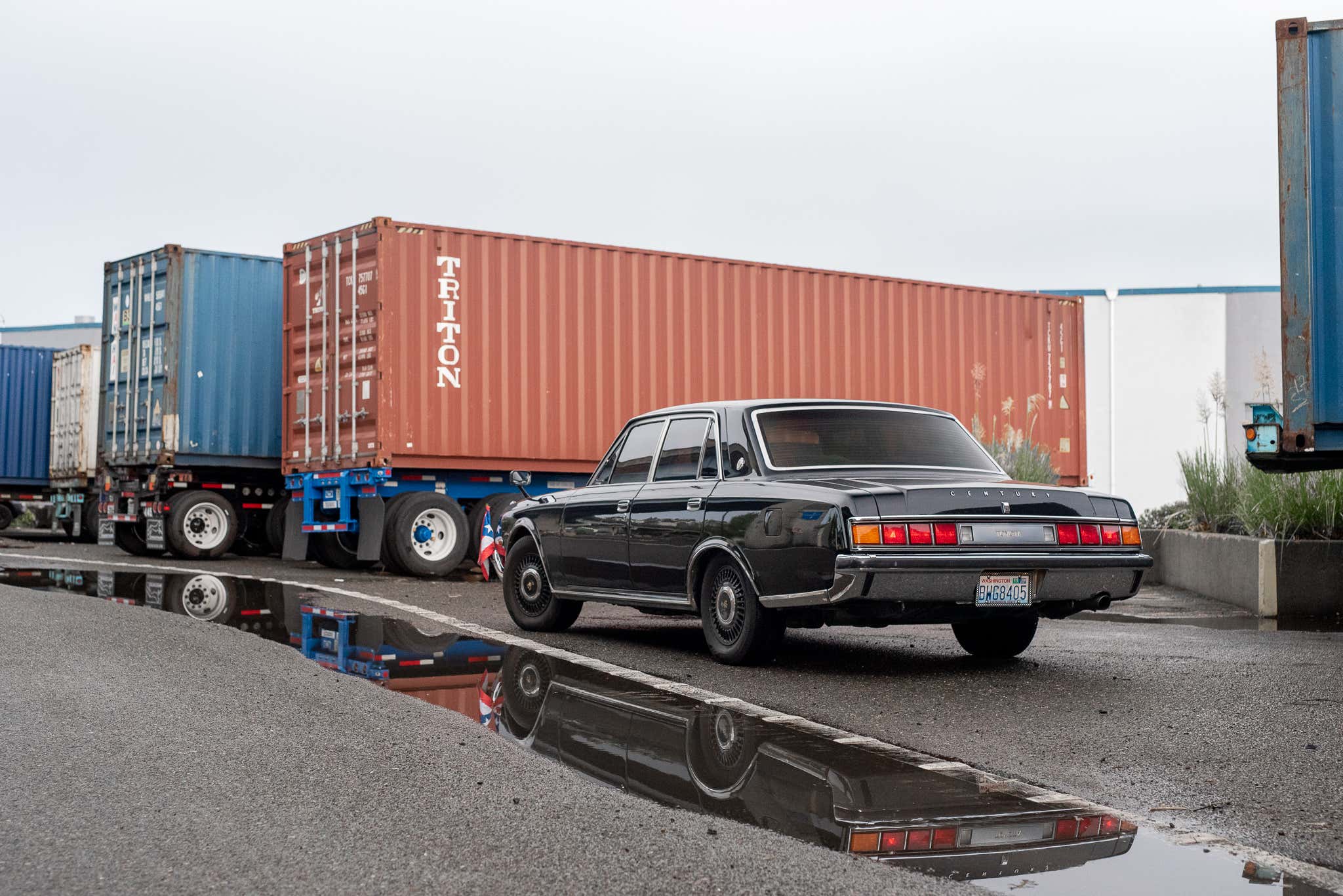 And even in America, without the cultural cachet of the Century surrounding it, it still has an undeniable presence. Getting tossed the keys to a Century is a special occasion no matter what spec it is, but this—one of the final models to roll off the production line before the second generation Century was introduced, with the 4.0-liter pinnacle of the “V” series Toyota V8s purring under the hood—is certainly special. The black-on-black paint scheme and deeply tinted windows help reinforce why this car was commonly thought of as the choice of the Yakuza (to the point that movies shot in Japan that rely on the gangster trope cast this specific car for their baddies). It’s sinister as hell in a way that Sonny’s Lincoln Coupe couldn’t ever attain.

The bad-girl image is great and all, but before I stepped inside, I wasn’t quite sure what it would actually be like to drive. I expected something similar to the first-generation Lexus LS400 that Americans were offered Stateside. A smooth V8 engine, plenty of torque, and class-leading comfort were what defined Toyota’s flagship luxury sedan efforts here, and on paper, the Century seems like a better-dressed version of those early LSes.

In reality, the Century is closer to a Rolls than anything I’ve ever driven from Toyota before. 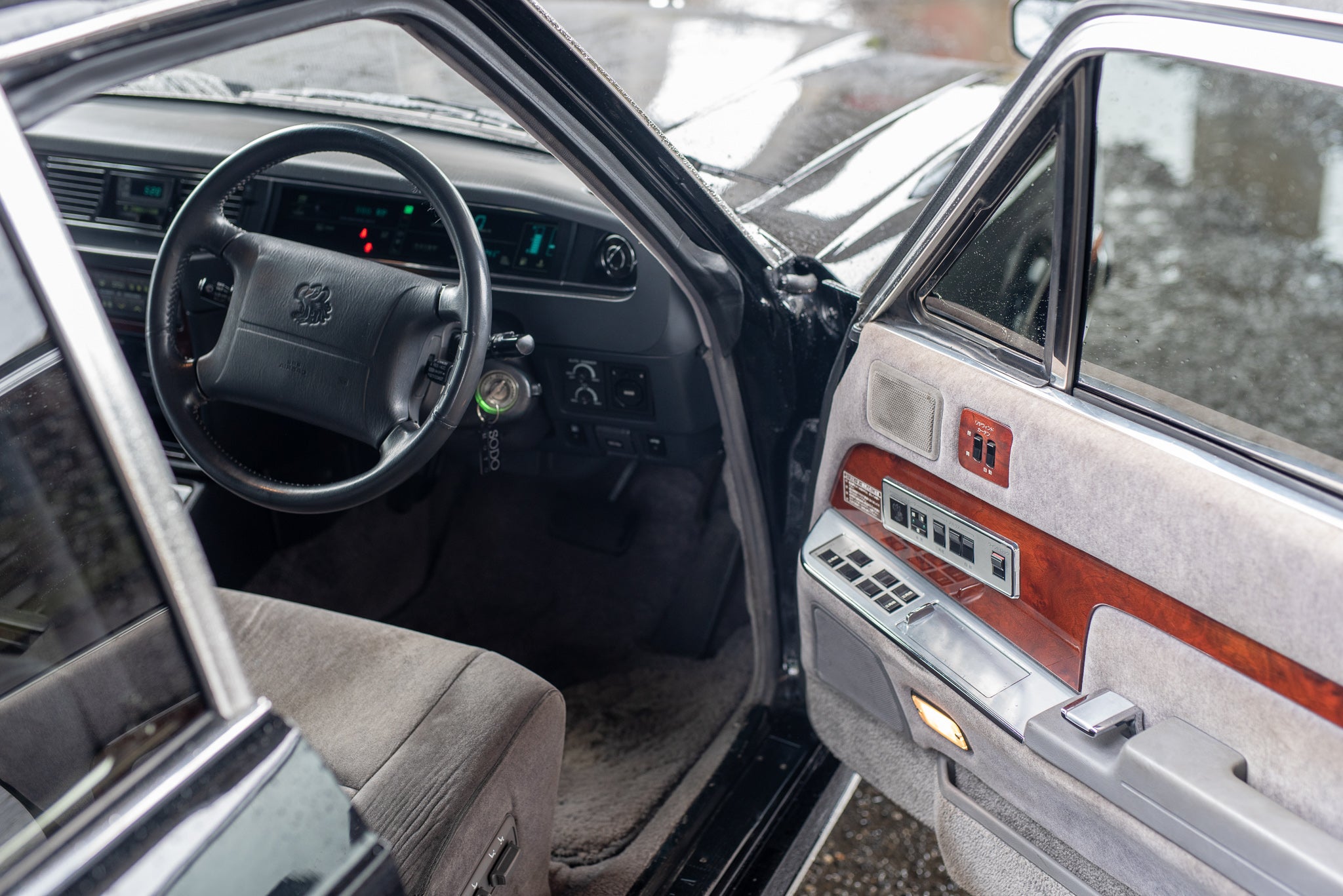 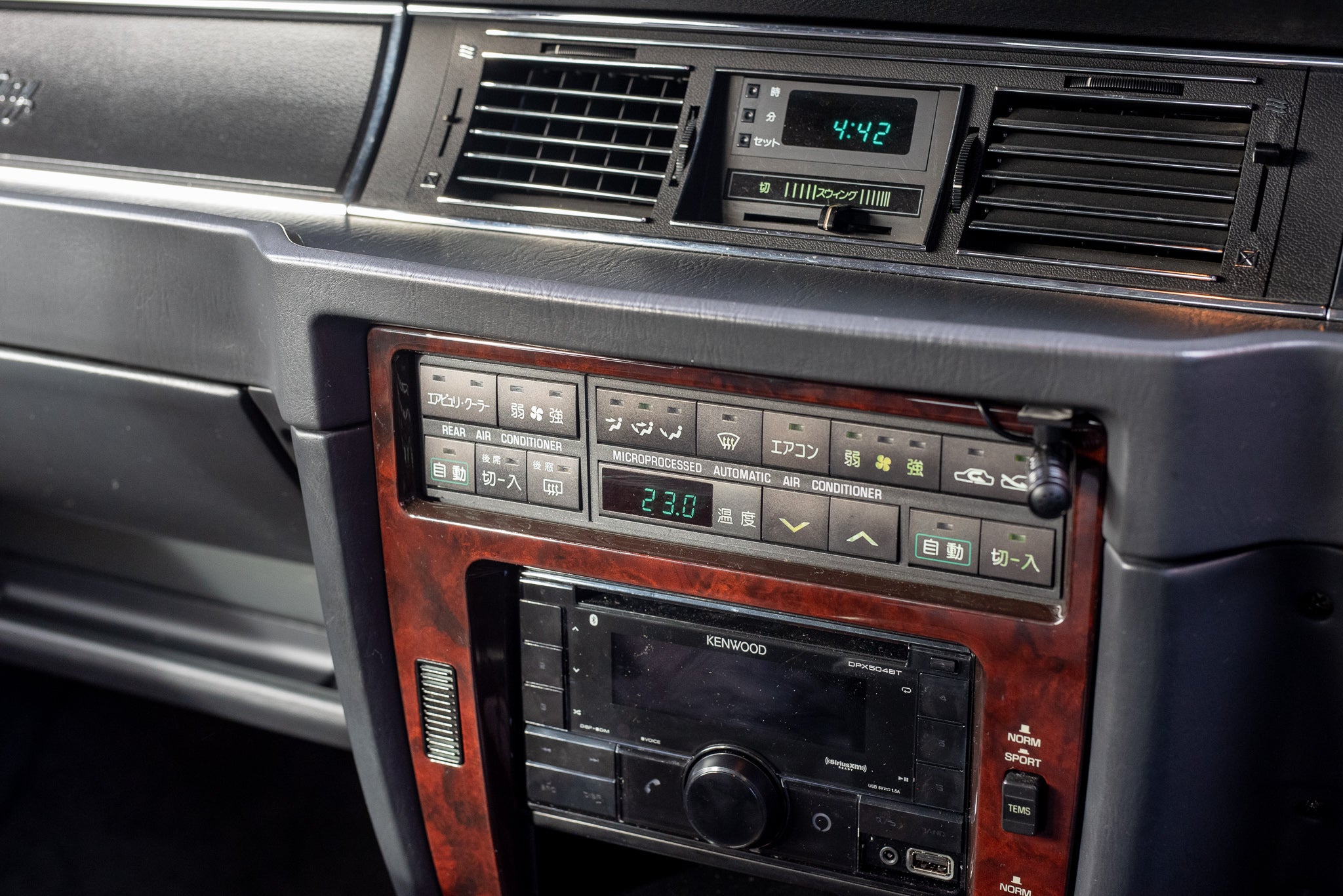 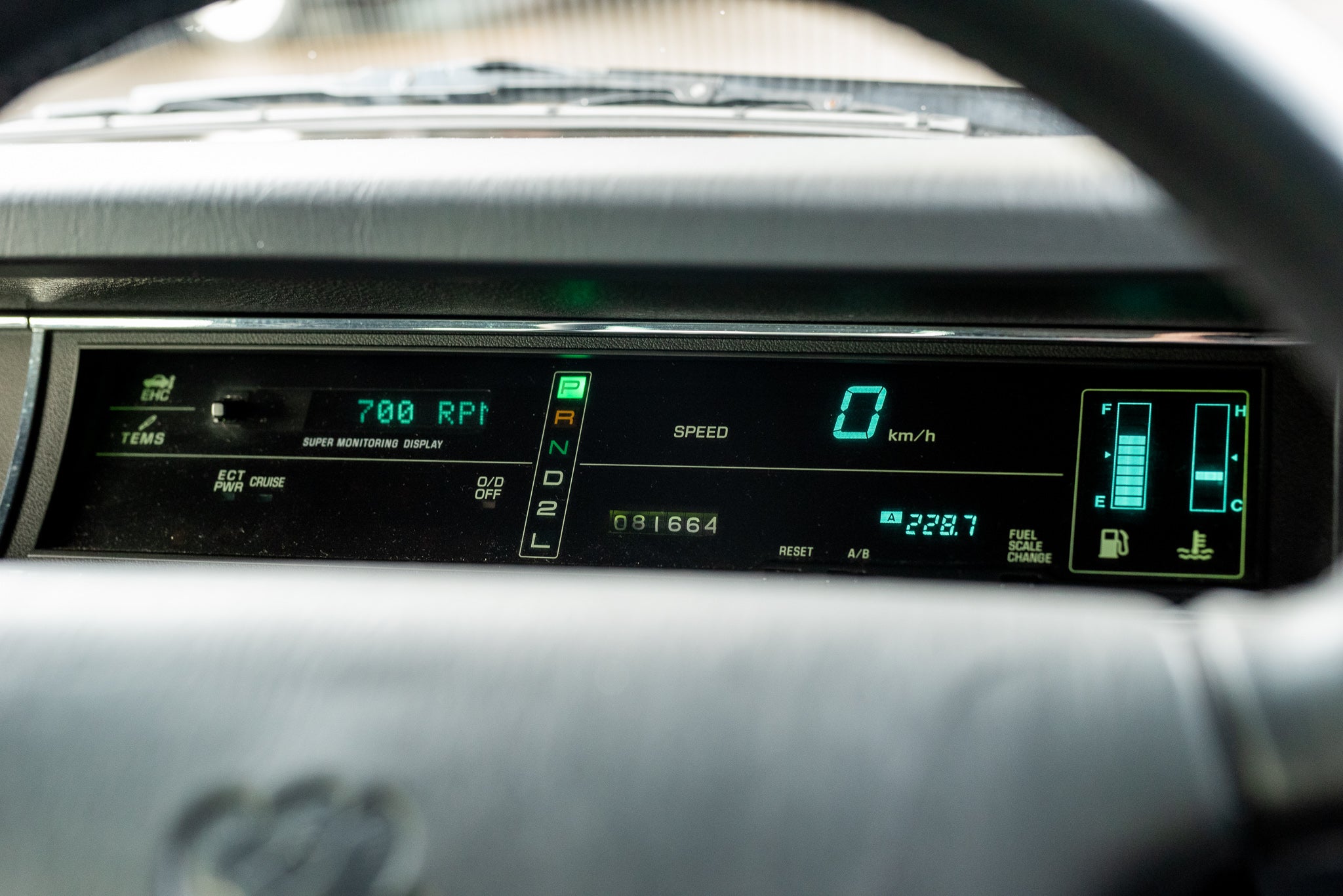 Before turning the key, it’s already shockingly different from any American luxury car because the interior is upholstered in extremely comfortable wool. Wool has been the standard trim for Centuries since the model’s inception because it helps make the cabin quieter and doesn’t get scorching hot or freezing cold in extreme temperatures like leather does. It’s also incredibly comfortable. This is not scratchy Christmas sweater grade fabric; it offers comfort beyond any leather or suede I’ve ever felt.

Additionally, the single-minded focus on the Japanese market is obvious from a brief glance at the center console. In most right-hand-drive JDM cars I’ve driven, all of the printed markings are in English, and kanji and katakana are relegated to stickers seen throughout the cabin, as a way of making the car more export-ready. In the Century, every surface is labeled in kanji. It is all meant for solely the Japanese luxury buyer, and no one else. 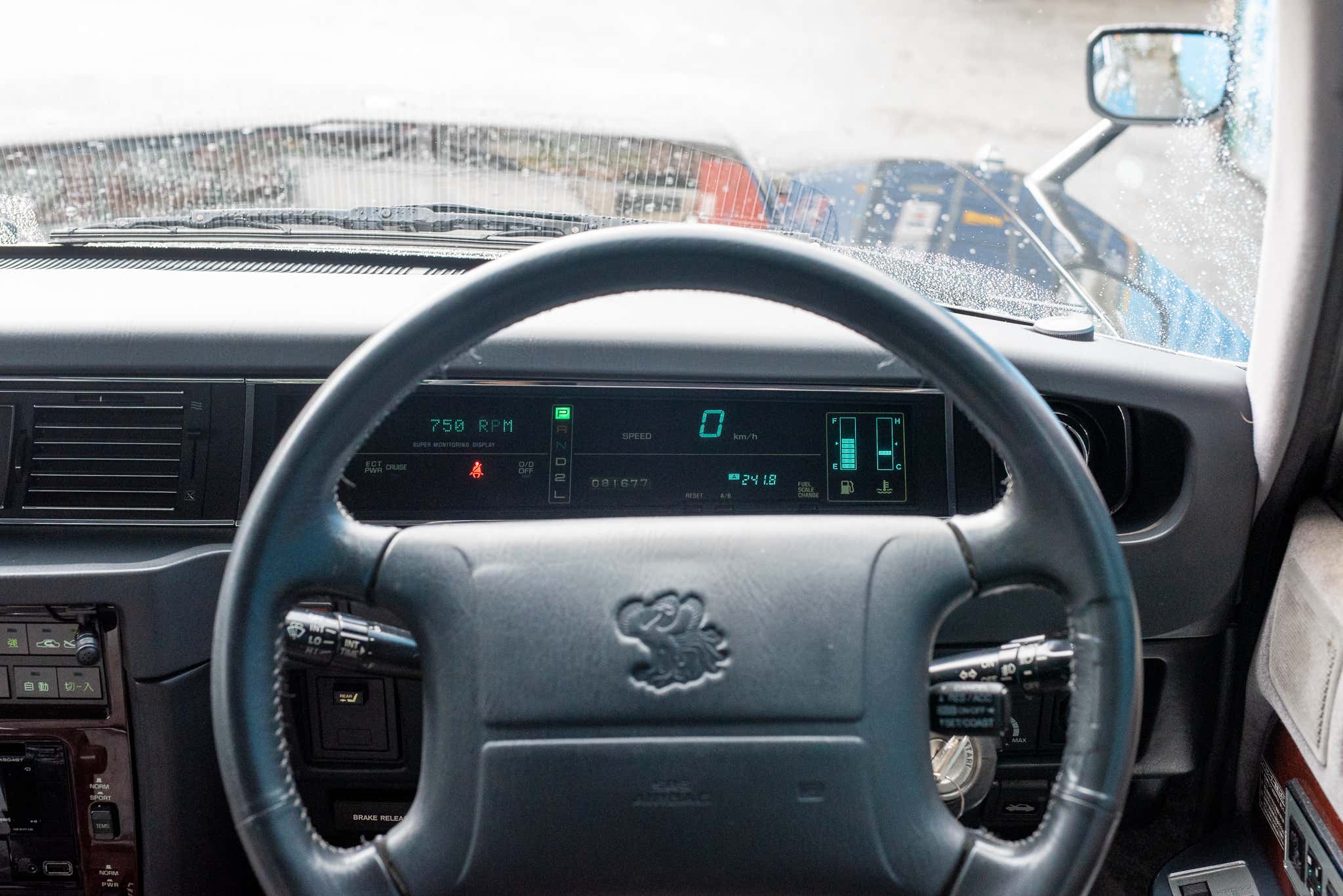 Driving the Century is to enter a world of comfort. The starter motor is louder than the engine itself; from the interior with the windows up, the cabin is completely silent from everything but full-tilt acceleration at the top of the rev range. Not only can the occupants not hear the four-liter up front, but they cannot feel it, either; the motor is so vibration-free you could perform brain surgery in the back seat with the air conditioning blasting on full. Wring that motor out to the top of its rev ranges, and despite the relatively mediocre horsepower figures, the V8 and its 213 pound-feet of torque do a good job moving the four-door along without feeling stressed; it’s like an executive suite that’ll do 180 kph on the Wangan.

The suspension floats in the same way that classic ’60s Americana does, with the long wheelbase and soft valving soaking up the bumps of Seattle’s port roads with ease. Unlike classic domestic body-on-frame sedans, though, you can toss it into a corner and aim it with at least a bit of accuracy. The steering is sharper than the 4,000-pound curb weight would suggest, although I wouldn’t describe it as communicative. Nonetheless, although the body roll is what you’d expect for a Rolls-Royce competitor, the TEMS (Toyota Electronic Modulated Suspension) does a fairly decent job of firming everything up when pitching the Century into a corner, and I actually had quite a bit of fun hitting some on-ramps in it. 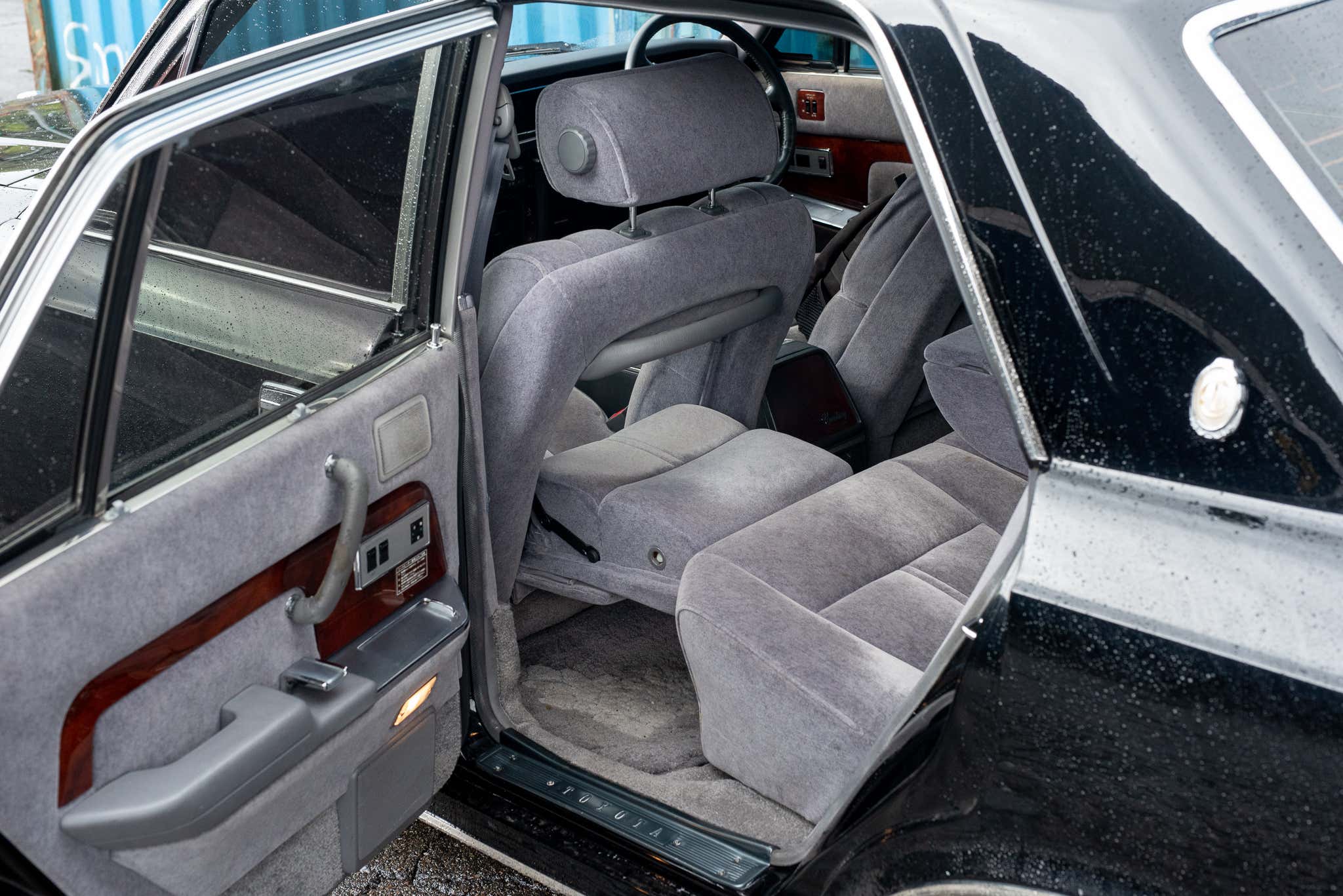 So yes, driving the Century is very pleasant, but reviewing it as a driver misunderstands the entire purpose of the car. This is a car that is purchased but never driven by its owner. The Century is solidly the choice of the chauffeured class, and the best evidence of this is the novel pass-through the front passenger seat has so the rear passenger may sit with their legs up. Legroom unsatisfactory? No worries, the rear passenger not only gets electronic controls to recline and adjust their seat’s lumbar support, but they also get buttons to move the front seat as well. To top it all off, most Centuries—including this one, originally—came with a rear window blind for passenger privacy. 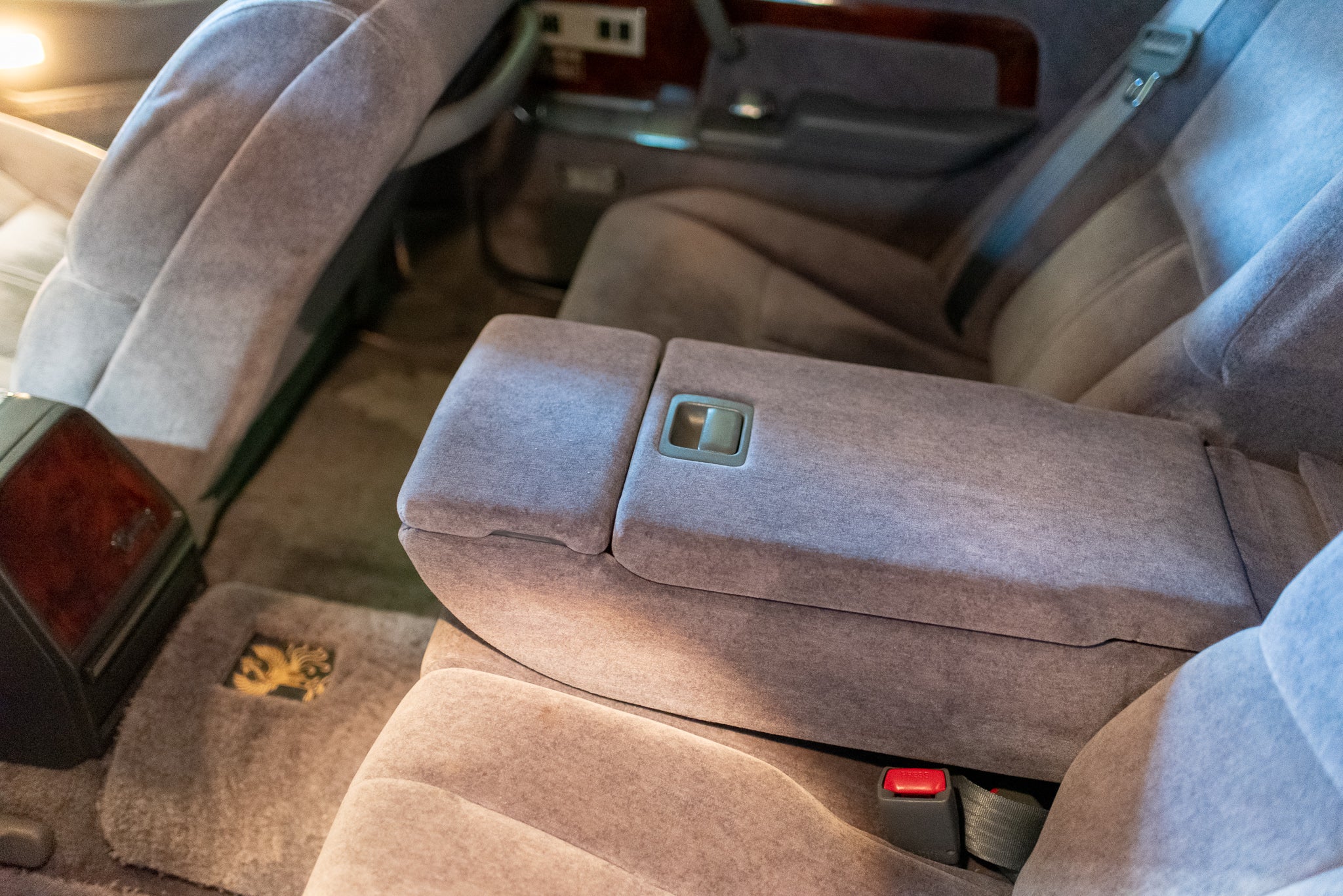 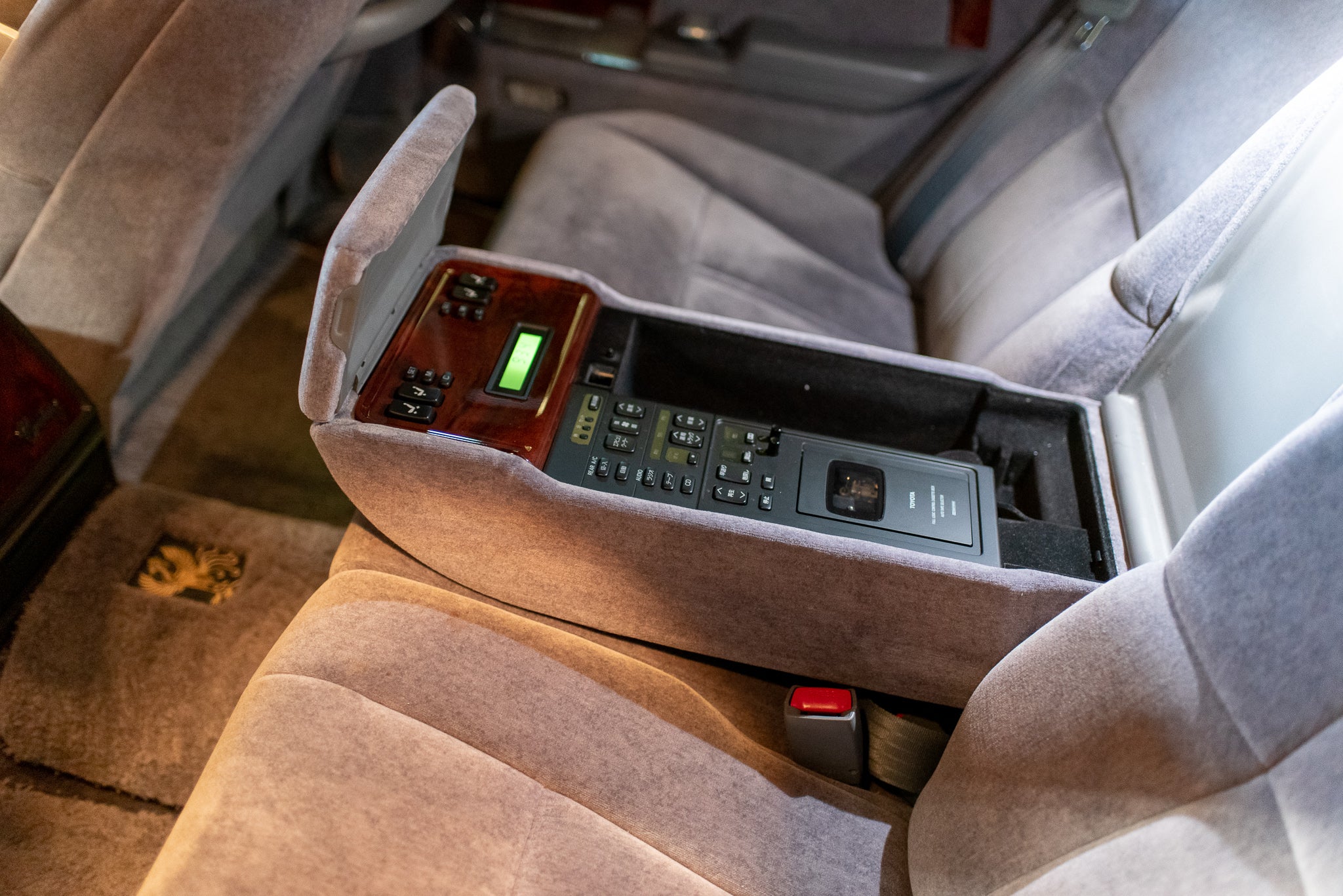 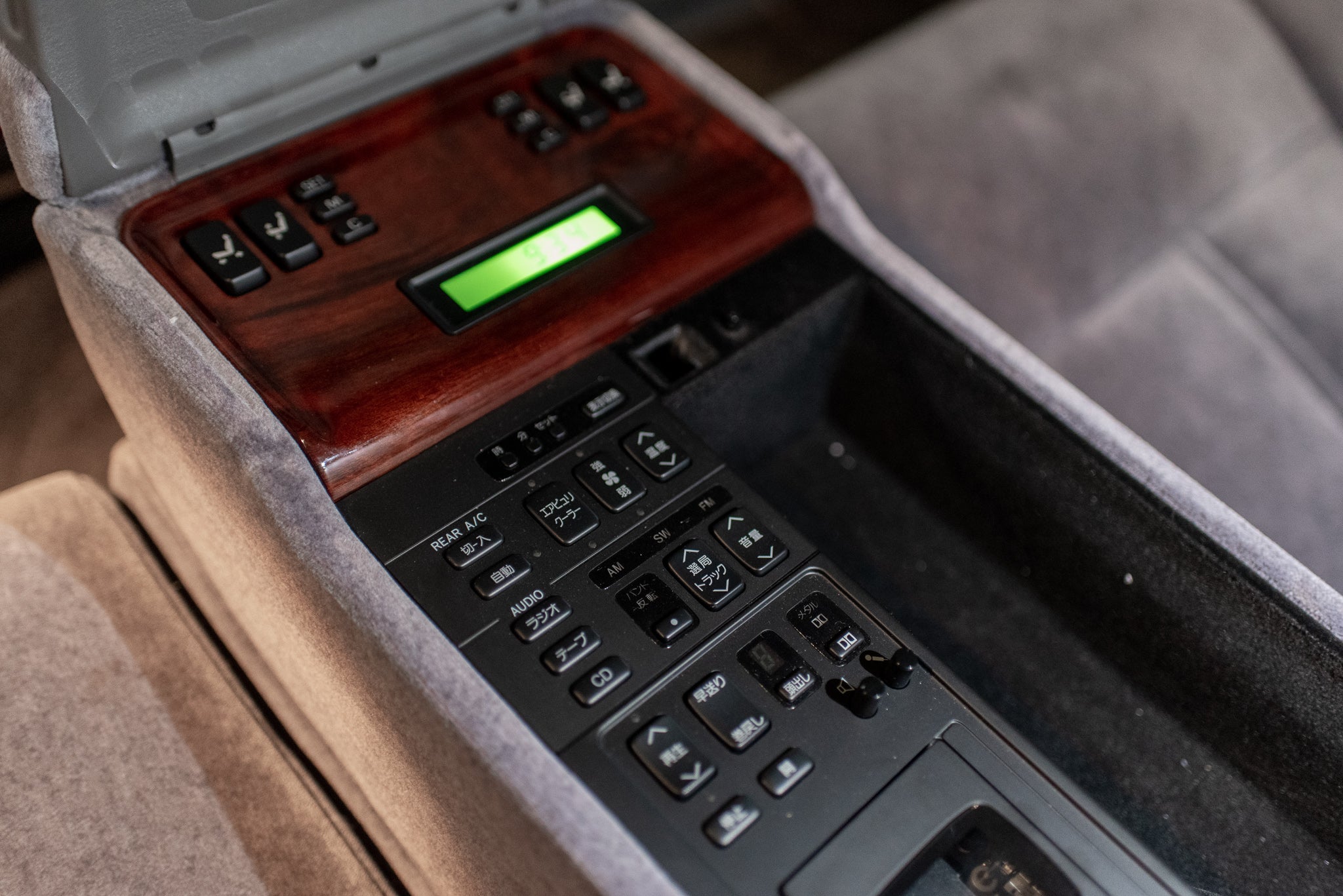 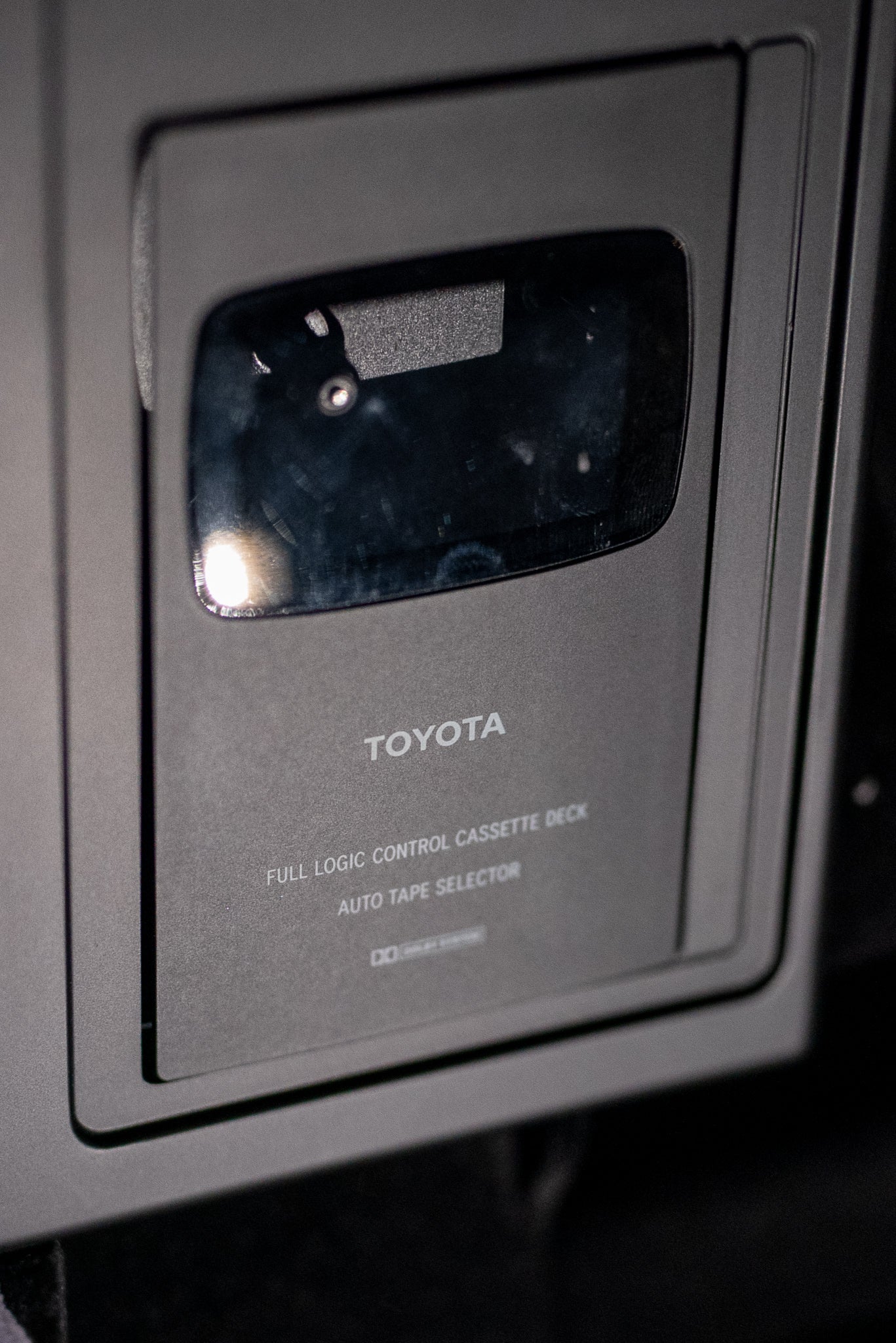 Need to get some work done while being driven to the office? Fold down the center armrest and tilt up the padding to reveal a Toyota-branded tape recorder for dictation built directly into the car. Not a fan of your driver’s taste in music? Full controls for the stereo are built directly into the armrest, as well. With most cars, the highest praise that can be given is that they are designed to be centered around the driver; in the Century, the rear passenger is the center of not just the car, but of their universe. Every possible comfort is directly at their fingertips.

This is where Toyota’s distinctly Japanese view of luxury becomes apparent and its appeal shines. The Japanese vision of indulgence is distinctly different than the Western world’s. Ostentatious hood ornaments and ornate displays of wealth proclaimed to outsiders are shunned in favor of a more subtle, thoughtful attention to the occupants, without a desire for projection. The concept is something that English lacks a good word for, but in Japanese, it’s sometimes referred to as おもてなし—omotenashi—which roughly means “attentive hospitality” or putting your heart into it. If, for instance, you worked as a server, you’d put in every part of yourself for the customer, no holds barred.

The Century’s ethos seems to revolve around this concept of leaving its passenger so well taken care of that they could not possibly fathom wanting more. If the goal is to flex your bank account, the Century is not the car for you—it’s simply too understated. But if the goal is to be in a car that caters to you with such thoughtful design that it virtually anticipates what would make you more comfortable, the Century excels in a way that few cars ever could. 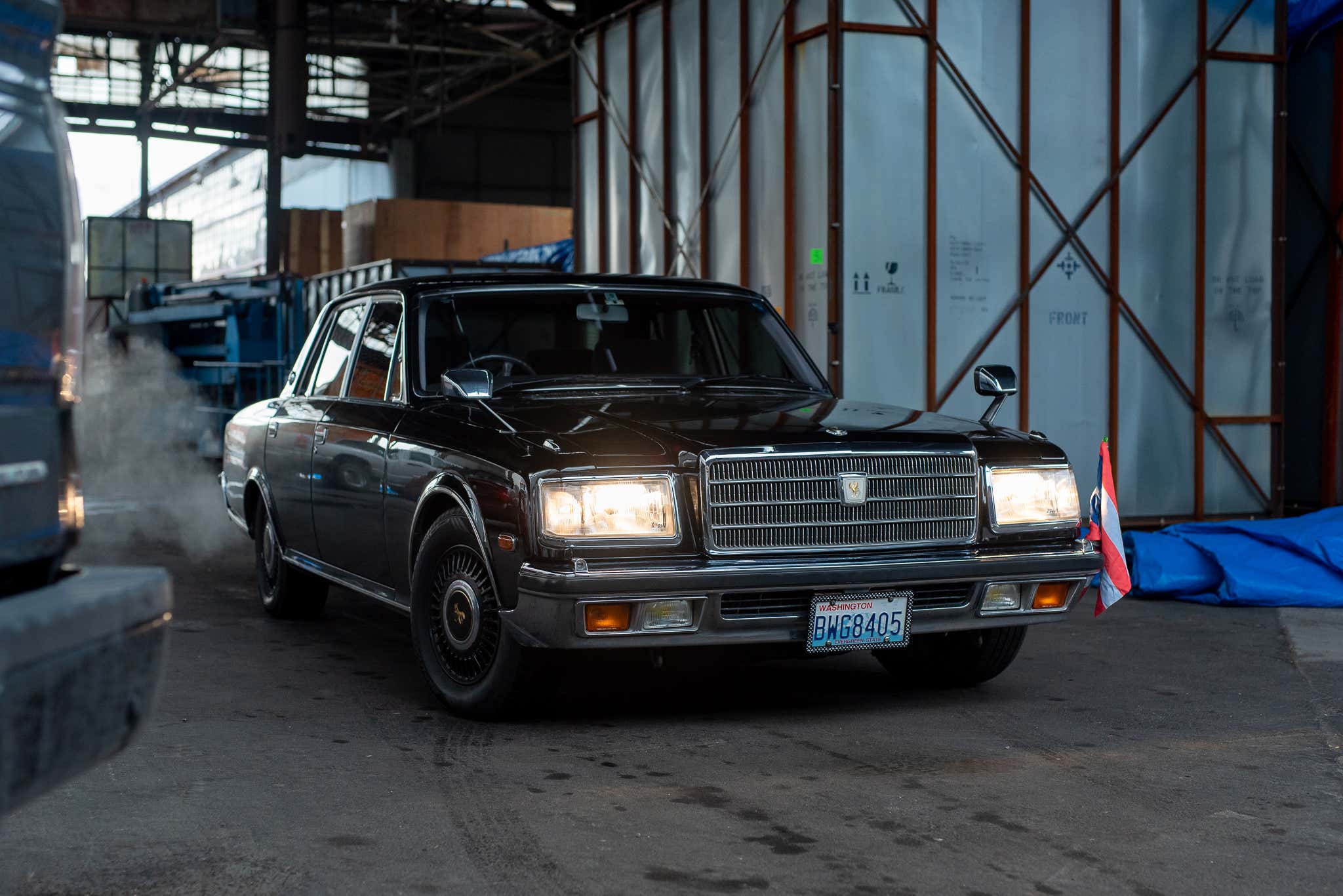 In this way, it makes sense that the Century was never exported. It’s certainly not because Toyota couldn’t compete with the luxury heavyweights of the rest of the globe, because the Century is as comfortable as any Rolls-Royce could be. And it’s been chosen by some of the most influential people in Japan—the Emperor himself opted for one for his coronation ceremony—so it’s more than proven its desirability.

But its entire focus on comfort for its passengers is so vastly different from what the Western world envisions as luxurious, that to market it here would be to dilute its entire appeal. A Century with a hood ornament and a rich Corinthian leather interior would be diametrically opposed to the entire intent of the car; it is defined by elegance without opulence. I couldn’t see a car so restrained doing well for markets like the U.S. where luxury cars, more often than not, are purchased as much as status symbols as they are for their comforts.

But if you wish to enjoy the finest comforts a car can offer from the rear passenger seat, there is no substitute for a Century. If you’ll excuse me now, I’ll be reclining in the back seat, legs up, dictating my next story on the tape deck.

Thank you to SODO MOTO for letting us review its Toyota Century! Got a tip or another older car you want to see us review? Send a note to [email protected] 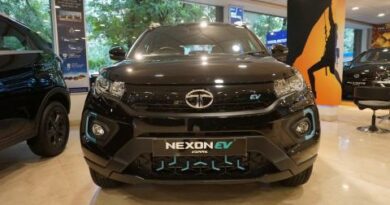 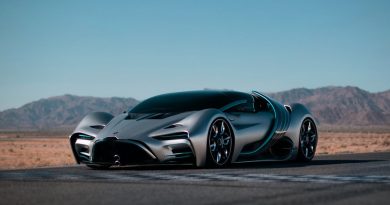 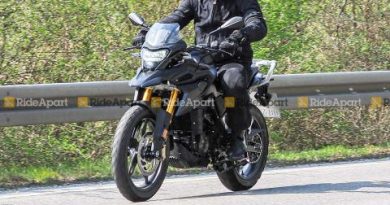