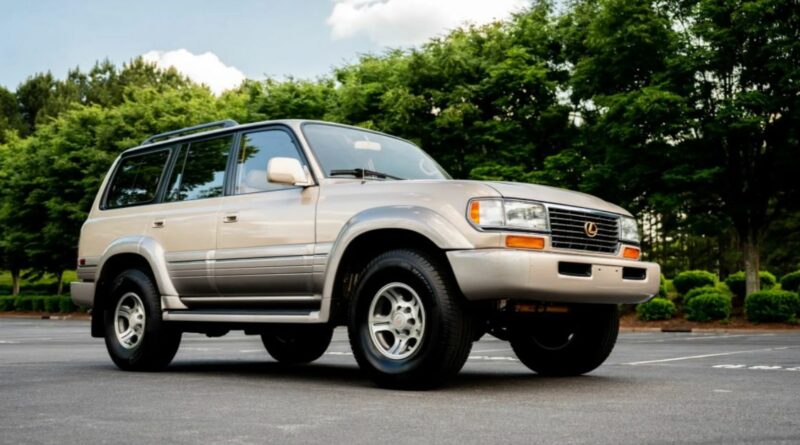 The Lexus LX is one of those SUVs that just about everyone knows, but may struggle to vividly remember the first generation of the vehicle. And some of the younger Lexus technicians in the US weren’t even alive when the first generation was offered for just two model years: 1996 and 1997.

The LX 450, of course, was a very lightly disguised J80 Toyota Land Cruiser that was developed quite late in the product cycle in 1995, going on sale in the US in early 1996. Powered by a 4.5-liter V8 paired with a five-speed automatic, the LX 450 arrived in a booming SUV market with a starting price just under $50,000. (Remember when that was a lot of money?)

The circumstances of its development had been largely forgotten by now, but are worth revisiting just to marvel at how different of a time the mid-1990s really were.

As a trade war brewed between the US and Japan, in the spring of 1995 American lawmakers proposed a 100% import tariff on a list of 13 Japanese luxury cars, including a number of Toyota and Lexus models. Just months ahead of the threatened sanctions taking effect, Japanese car dealers were deluged with demand from consumers who wanted to buy a vehicle before they effectively doubled in price. But the list of 13 cars on which tariffs would be placed did not include any SUVs, and it didn’t include the Lexus RX either because it wasn’t on sale yet. In order to hedge against sanctions actually taking effect, Toyota cooked up the LX 450 by adding a few options to the Land Cruiser along with different badges, new wheels, and a Lexus grille.

The sanctions did not end up going into effect, with the trade war having been settled, but the LX 450 started selling well despite being a badge engineering special, because it was 1996 outside and lots of people were buying big, luxury SUVs. The quick creation of the LX turned out to be a blessing for Lexus, even though its sales were quickly dwarfed by the RX, but it showed there were plenty of people willing to pay money for a less-than-latest Land Cruiser with a Lexus badge. 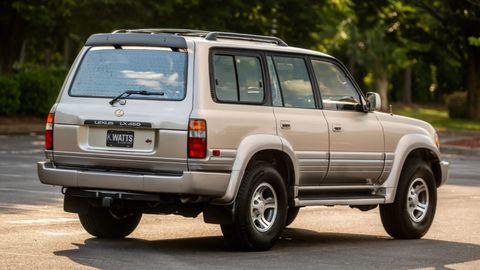 With the first generation recording sales of just around 14,000 units in the US and Canada (it arrived in Canada for 1997), the LX was never a common sight outside of some Lexus strongholds of the time in sunny states and wealthy suburbs, just as J80 production was winding down. A new Land Cruiser was just around the corner for 1998, known internally as the J100, with a corresponding Lexus model badged as the LX 470 and now powered by a 4.7-liter V8. The Lexus LX 470 was now far more differentiated from its Land Cruiser sibling inside and out, with a very different front fascia, and different taillight design, even though the taillights sat in identical niches.

It’s safe to say that the LX 470 quickly upstaged the first-gen model, not to mention by the blockbuster that the RX 330 turned out to be, for plenty of good reasons.

It would be easy to chalk up the rise in demand for the LX 450 over the past few years to the preexisting demand for the J80 Land Cruiser. There is certainly some of that, with the 60- and 80-series models having gradually grown in popularity (and auction results) over the past decade. The worst-kept examples have mostly perished by now, leaving a small number of top, if not strictly concours-condition examples and a moderate number of middling examples.

If there is an extra trend that has been motivating LX 450 buyers, it’s ’90s nostalgia that, at first blush, is not all that easily explained to those who aren’t already affected to it.

“This is a car you’d see driving out of the gates of an expensive private school,” one LX 450 owner tells us. 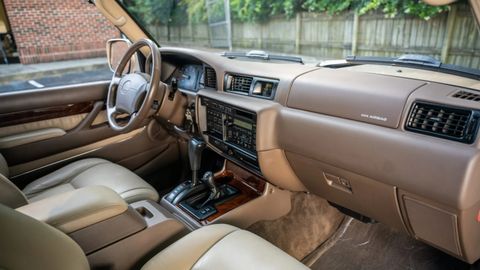 The LX 450, like very few SUVs of the 1990s, was not produced in big numbers at all. Being a pricey and somewhat rare model, it also meant that quite a few examples were the third or fourth cars in a household, or were bought by wealthy retirees who may have kept one in a sunny second home, or simply didn’t drive them all that much. Often optioned in that light champagne color, the LX 450 was also a bit of caricature of Lexus models of that era, seen through modern eyes.

“I bought mine seven years ago now, and it kind of happened by accident,” one LX 450 owner told Autoweek. “I wanted a winter car a few years ago for skiing, and I was looking at getting something sturdy from the 1990s for under $10,000, something I’d keep for a few years. I was looking at all these Land Cruisers around here and not really finding anything that wasn’t rusted, so I figured there would be lots for sale in Florida, retiree cars, and sure enough there were. So I was looking at Cruisers from the late ’90s and then I remembered there was a Lexus one too. So I started looking for those too and I found one in Florida that was a 1997 model. Bought it, flew down and drove it up east.”

Of course, seven years ago was just before the door started closing on low-hanging fruit when it came to Land Cruisers and their Lexus twins. That was still a time of post-recession recovery, and big SUVs from the 1990s with maintenance needs and thirsty V8s were definitely not in demand.

Now is a much different time, and finding an LX 450 with low miles and clean service records could take some effort. 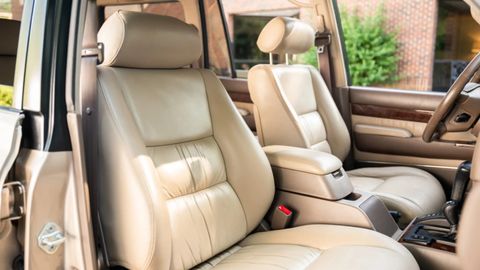 “You’d think nobody would give these the time of day, but I have people come up to me all the time to take a look at it,” the owner tells us. “They say they forgot all about them, but now that they see one they remember them. Sometimes people start cracking up and clapping when they see one, and they tell me it’s because they love it. So yeah, it gets noticed, but only by the right people. The funny thing is that now they’re worth more than 10 years ago so I don’t want to sell it. I’ve started babying it.”

What do people like about them now, we ask the owner, that’s different from 10 or 15 years ago?

“It’s a kind of ’90s kitsch, cause people would get these in that beige color and they’d get the badges gold-plated and everything,” the owner adds. “But it’s also nostalgia because this was a status car back then. You’d see these at golf courses.” 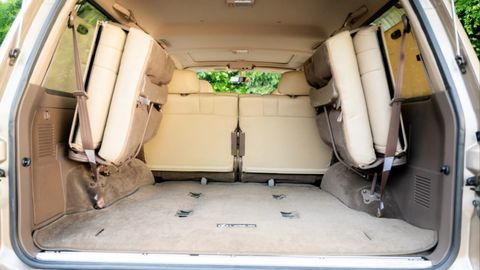 One thing that hasn’t changed about the LX 450 is its thirsty V8, with the gas prices of the late 2010s arriving just in time to make J80 ownership easier. But as hardy as the TLCs of the time were, the ones in the salty northern states have not all fared well, making top examples difficult to locate for a song.

Another thing that appears to be common to J80 and LX 450 ownership are the dual paths that we’ll call the light 4×4 modding route, and the preservation class. LX 450 owners tend to fall heavier into the latter category despite an endless variety of aftermarket modifications available for this model, but a few have been given beefy tires and some off-road equipment.

Nineties nostalgia is certainly not past its peak, but it’s safe to say that the days of finding overlooked, low-mileage LX 450s are just about over. We’ve seen a few examples crest the $40,000 mark in the past couple of years, with the vast majority of cleaner examples sitting between $15,000 and $25,000. That not cheap for a ’90s SUV.

Are there any SUVs from the 1990s that you’d consider buying for occasional use? Let us know in the comments below. 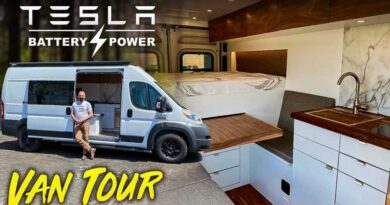 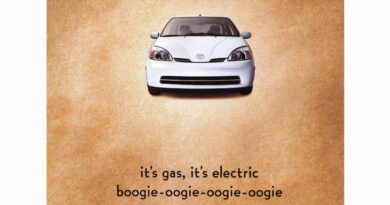