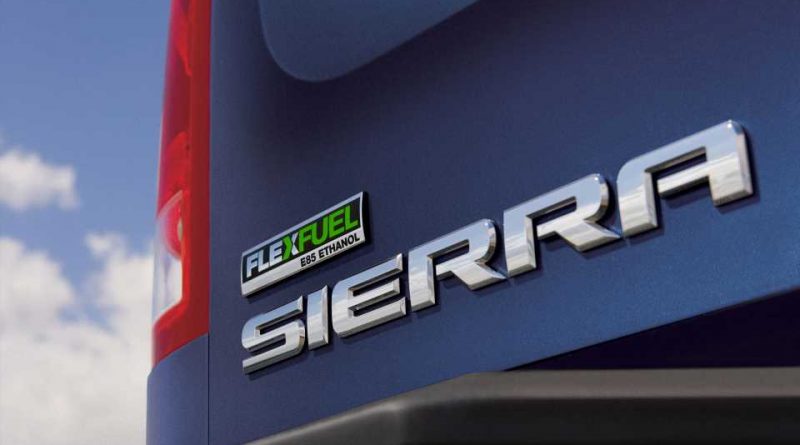 The future of the world depends on humans stopping, and hopefully reversing, the damage they caused to Earth by mining and using fossil fuels. Innovators and scientists have scrambled for decades to find ways to reduce these fuels’ byproduct emissions.

We’re not there yet, even though part of this mission to find climate change resolutions focuses on renewable energy such as ethanol, an alcohol made from biomass. It’s also the key ingredient in Flex Fuel.

Flex Fuel Vehicles (FFV) have spread throughout the automotive industry during the past 20 years and offer customers a fuel choice other than traditional gasoline. It’s not a hybrid or an electric car, but it’s something, and every little something can help. Read The Drive’s Garage Guide to Flex Fuel to learn what it is, how it’s used, where it comes from, and its positives and negatives. Let’s get to it.

What Is Flex Fuel?

Flex Fuel, also known as E85, is a fuel mixture made of gasoline and between 51-83 percent ethanol. E85 can only be used in Flex Fuel vehicles that have been specifically designed to use this type of fuel.

Ethanol is undrinkable clear grain alcohol harvested from starchy and sugary plants such as corn, sugarcane, sorghum, barley, and others. In the U.S., a majority of ethanol comes from corn fermentation. Ethanol is considered a renewable fuel because it is made from biomass, or plant matter, rather than fossil fuels.

Nearly all gasoline has some level of ethanol content, with the most commonly used types at the pump containing up to 10 percent ethanol. 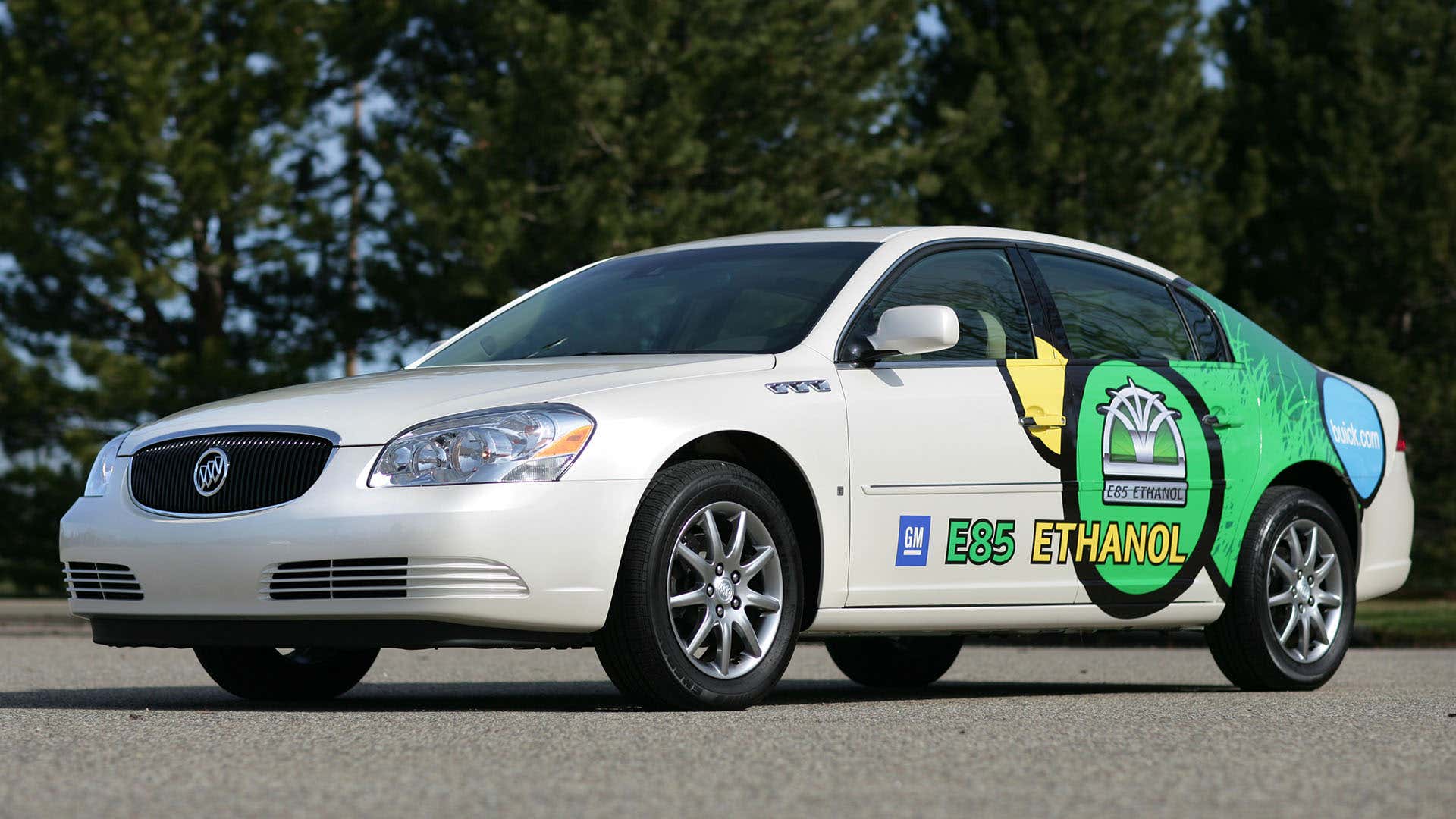 E15 is a different level of blended fuel that uses gasoline and 10.5-15 percent ethanol. In June 2011, the United States Environmental Protection Agency (EPA) approved blends of 15 percent ethanol in gasoline for use in model year 2001 and newer passenger cars, light trucks, and medium-duty vehicles. One benefit is that ethanol is a cheap way to boost octane.

What Is a Flex Fuel Vehicle?

A Flex Fuel Vehicle (FFV) is a vehicle that has been specifically designed to drive using E85 fuel. FFVs are similar to common gasoline vehicles, aside from a few altered parts, and many FFVs can optionally run on regular gasoline making them easier to live with day in and day out.

For example, the Ford F-150 is available with Flex Fuel powertrains, the 3.3-liter and 5.0-liter engines. To accommodate E85, Flex Fuel F150s have unique fuel lines with a nickel coating on the inside diameter of the lines. They also have higher volume fuel pumps and fuel delivery modules with aluminum rotors compared to composite rotors.

As of 2017, there are more than 3,600 public E85 fuel stations in the United States for more than 21 million vehicles on the road, according to the U.S. Department of Energy’s Alternative Fuels Data Center.

How To Identify Flex Fuel Vehicles

Look for these three things to determine whether or not you have a flex fuel vehicle.

Or, look in the car’s manual. Just read the whole thing while you’re at it. Your car will love the thoughtful affection, and it’s the perfect way to kill an afternoon or fall asleep 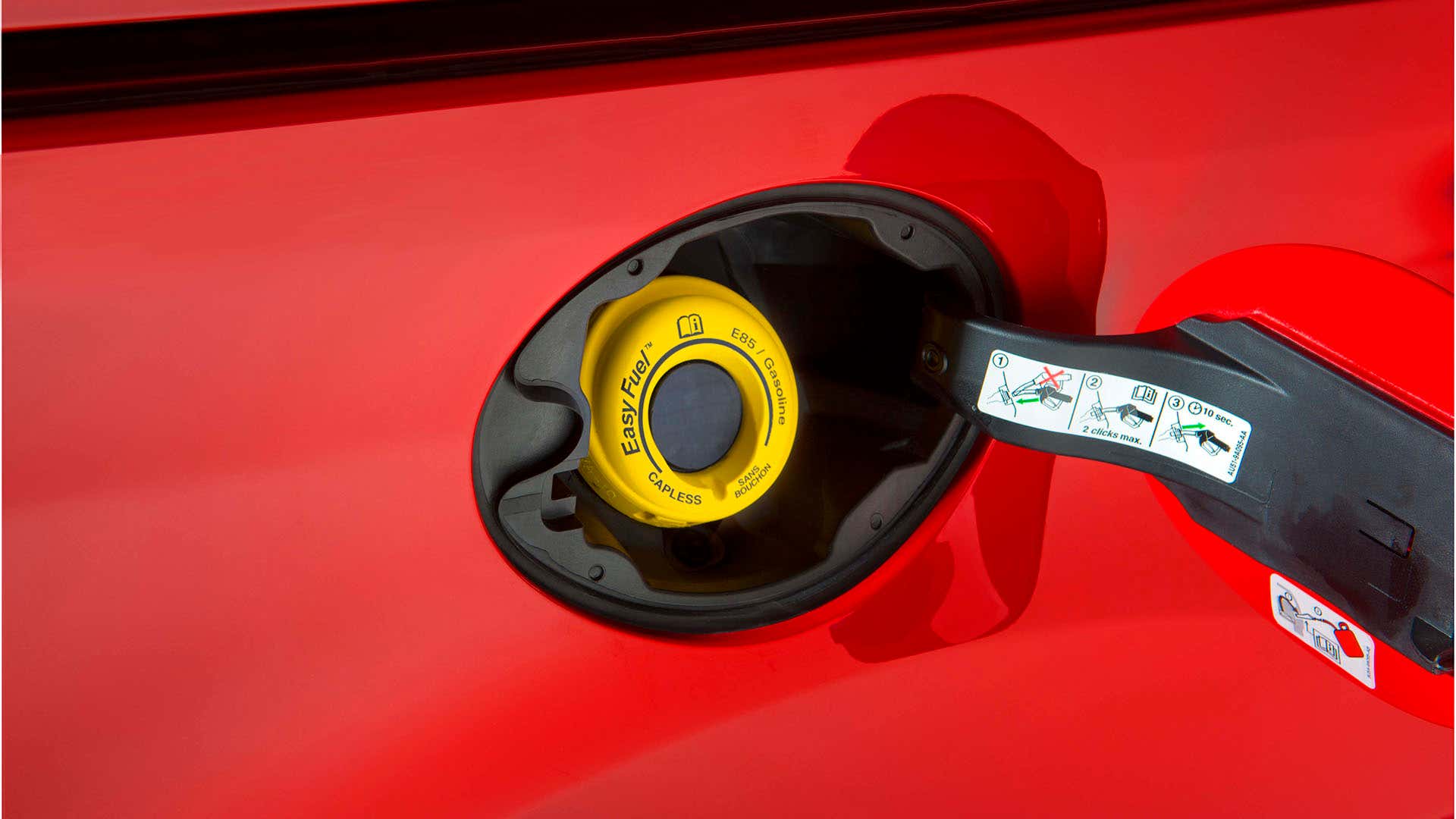 Flex fuel vehicles can be identified by yellow fuel labels.

Technically, the first FFV was Henry Ford’s Model T in 1908, as it used an adjustable carburetor and could run on gasoline, ethanol, or both. From a modern standpoint, however, one of the first Flex Fuel vehicles that could run on E85 was the mid-to-late ‘90s Ford Taurus, following Ford’s experimental M85 methanol-powered vehicles. 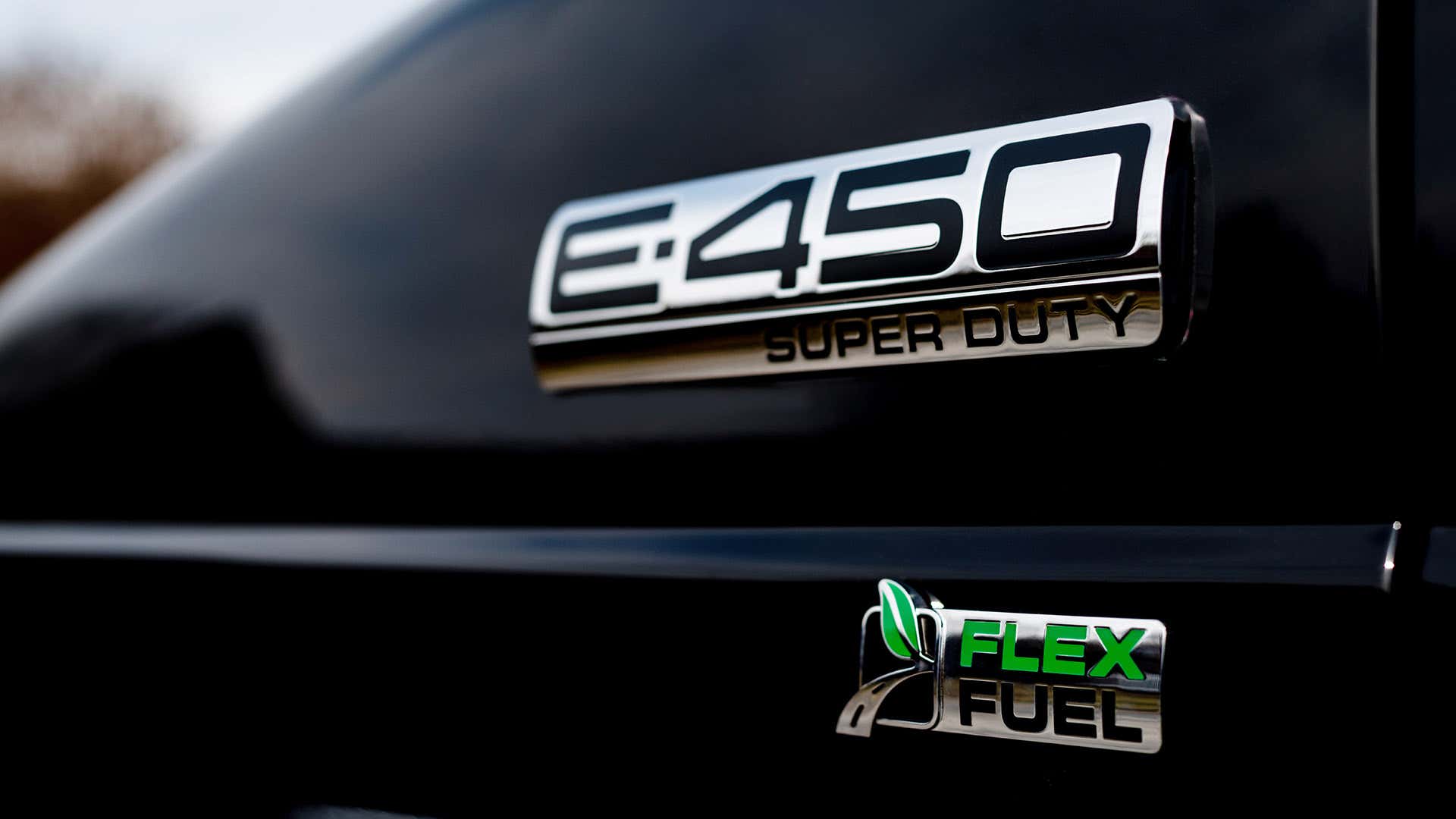 You have the questions, The Drive has the answers!

Can You Use Regular Gas In a Flex Fuel Vehicle?

Most FFVs can run regular gasoline, but always read the vehicle manual to double check.

Can You Use Flex Fuel In a Regular Gas Vehicle?

Regardless of whether or not it’s possible, we do not recommend using E85 in vehicles that have not been designed to run on E85. Should you accidentally fill your car with E85, repeatedly top it off with regular gas throughout the next tank or remove it with a fuel transfer pump.

What Is the Benefit Of a Flex Fuel Vehicle?

The main benefit of a flex fuel vehicle is that a majority of its content comes from a renewable source. A secondary benefit is a slight increase in torque. The Oak Ridge National Laboratory details more on the results of E85 usage in its report, “Effects of High Octane Ethanol Blends on Four Legacy Flex Fuel Vehicles and a turbocharged GDI engine.”

Is Flex Fuel Good or Bad?

Good or bad is subjective, but flex fuel vehicles fit some lifestyles and not others. 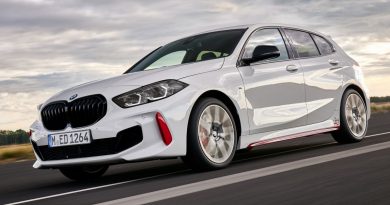 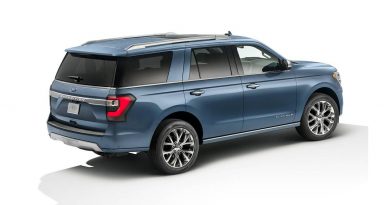 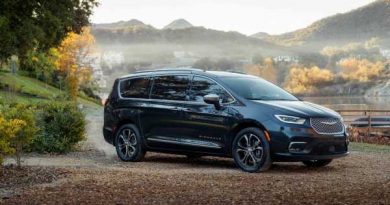