History has been made – Tesla has finally overtaken Toyota to be the world’s most valuable car brand by market value, which currently stands at US$205 billion (RM878.5 billion). Toyota, the second largest carmaker with an annual production of over 10 million cars, trails behind with a market capitalisation of US$200 billion (RM857.1 billion).

Tesla’s rise to the top of the stack is explosive. Its shares multiplied fivefold in the last 12 months, from US$230 (RM986) to US$1,100 (RM4,714). That’s a big turnaround, considering that the electric car brand was just weeks away from death, CEO Elon Musk said in November 2018.

However, with debt included, Toyota is still worth more at US$284 billion (RM1.22 trillion) compared to Tesla’s US$207 billion (RM887 billion) enterprise value, according to financial data provider Sentieo. Analysts are baffled by Tesla’s meteoric rise in shares, despite producing only 500,000 cars this year and barely making a profit. Musk even tweeted that the company’s share price of US$775 (RM3,321) last month was “too high,” but that didn’t slow its valuations. If Tesla breaks even in the April-June quarter, it will be the first time the business has been in the black for four straight quarters.

For traditional automakers, their values have slid due to the coronavirus pandemic. Toyota’s shares fell by more than 12% since February, after being forced to shut down factories and showrooms around the globe. Last month, it revealed that operating profits could reduce by 80% and warned of a steep decline in vehicle sales, but vowed to remain profitable after the fact.

So far, analysts expect global car sales to fall by 15% this year, while demand for electric vehicles – backed by tighter regulations in Europe and China – continue to rise. Tesla expects sales to continue growing despite having more competitors in the field today. 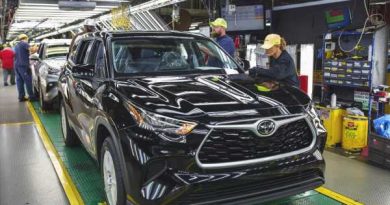 Toyota plans to resume US production from April 20