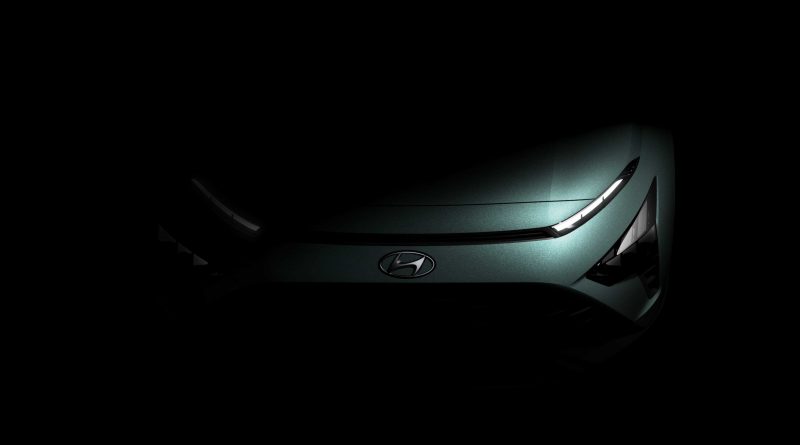 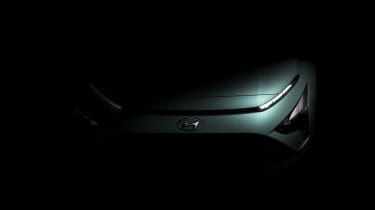 Hyundai will soon expand its line-up with the new Bayon. It’s a compact crossover designed to sit below the Kona and act as the new entry-point to the brand’s crossover range. These official teaser images provide a good indication on how the new car will look.

It’s expected to arrive in the UK in the middle of the year, where it’ll compete directly with the Ford Puma and Volkswagen T-Cross, while providing yet another rival for the Nissan Juke.

Based on these images, the Hyundai Bayon’s design will follow the company style guide. Up front, it shares the same high-mounted daytime running lights, low-mounted headlamps and narrow bonnet intake as the Kona. The crossover’s full-width rear light bar also apes the unit found on the i20 supermini.

Official specifications are yet to be confirmed, but the Bayon is expected to share its platform and engine range with the i20. The supermini currently has a petrol-only line-up, consisting of an 83bhp 1.2-litre four-cylinder unit and a turbocharged 1.0-litre three-cylinder mild-hybrid unit, with either 99bhp or 118bhp.

Elements of the i20’s cabin, such as its funky four-pronged steering wheel and eight-inch infotainment system will likely be carried over to the new crossover. Flagship models should also come with Hyundai’s latest infotainment setup, which features two 10.25-inch screens – one for the gauge cluster mounted and one to handle the car’s media and navigation. 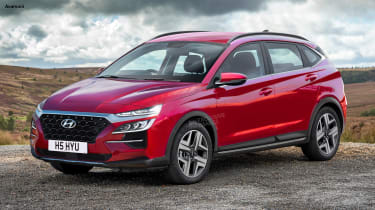 Despite the mechanical and technological similarities, Hyundai insists that the Bayon will be more than just a jacked-up i20 in some plastic body cladding. A spokesman for the brand told us that, apart from the rear doors, every panel on the crossover will be new.

While these new teaser images are more revealing than most, our spy shots provide a better indication of the Bayon’s proportions. It certainly looks a similar size to the i20, although the car’s ride-height and driving position have both been lifted up, to fit the crossover class.

It’s worth noting that, when the Bayon is launched, it’ll be fighting for the same customers as Hyundai’s current B-segment SUV in its line-up, the Kona. However, the firm’s future plans for the latter crossover should provide a suitable amount of distance between the two models, allowing them to sell independently of one another.

When the Kona is replaced in around four years time, it’ll go the same way as the Tucson and the Santa Fe, growing in size across the generation change. Hyundai hopes this will remedy the SUV’s biggest criticisms – its cramped rear bench and small boot.

Hyundai has also hinted at the possibility of the next-generation Kona going electric-only. The firm sold around 3,500 examples of the current Kona electric last year, which is roughly 30 percent of the car’s total sales figures – so the business case is certainly sound.

Making the Kona range all-electric would also provide plenty of breathing space in the firm’s line-up for the petrol-only Bayon, before the Government’s ban on combustion cars comes into force in 2030.

Speaking about the upcoming Bayon crossover, Andreas-Christoph Hofmann, Hyundai’s Vice President of Marketing, said: “Hyundai is strongly established in the European SUV market already, in terms of our model range as well as our sales success.

“By launching a new, additional B-segment model as the entry point into our SUV line-up, we see a great opportunity to cover European customers’ demand even better and to increase our offering in a highly popular segment.”

What do you make of the new Hyundai Bayon? Let us know in the comments section below… 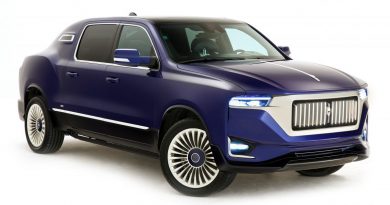 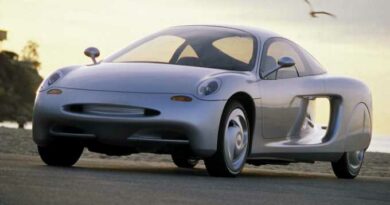