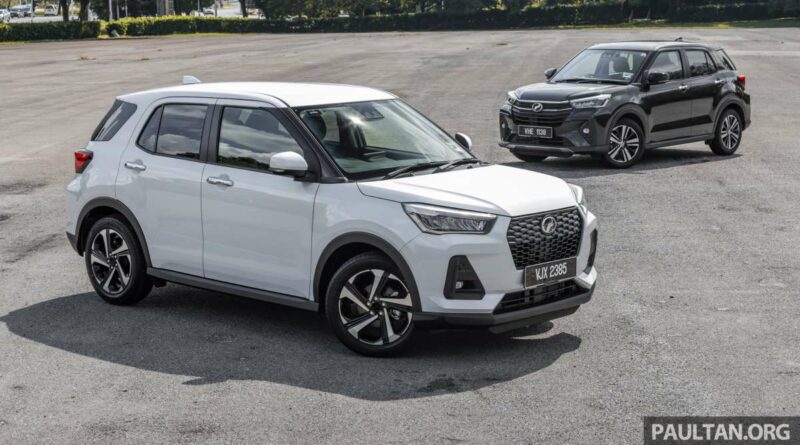 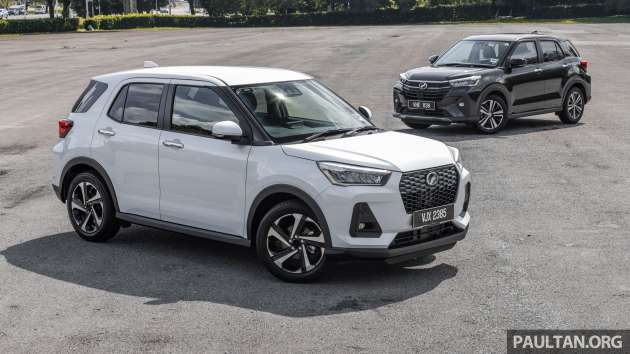 Here’s our first full gallery of the Perodua Ativa Hybrid in the usual comprehensive style that you know and love, with every exterior angle and every interior nook/cranny covered. As a bonus, we have the subscription-only Ativa Hybrid side-by-side with the regular Ativa Turbo that you can buy in showrooms.

If you don’t already know, the Ativa Hybrid is the subject of an ‘electric vehicle study’ as well as a ‘long-term mobility as a service market study’. The first study is to understand driving behaviour of a hybrid vehicle in cities (Klang Valley, Penang and JB account for 60% of Perodua sales, with KV alone contributing 40%) and the other is to understand consumer acceptance of a five-year subscription service, as opposed to the traditional car purchase and ownership.

Programme participants need to pay an upfront payment of RM2,150 (includes refundable three months safety deposit, the first month fee and stamp duty) followed by a monthly subscription fee of RM500 for the next five years. Maintenance (including wear and tear items), insurance and road tax will be covered by Perodua, as the Ativa Hybrids are registered under the company, not in the name of the customers.

It is a five-year commitment and the mileage cap over the period is 100,000 km, which averages to 20,000 km a year or 1,666 km per month. At the end of the tenure, the total amount paid to Perodua would be RM30,150 and the hybrid will go back to the company. By the way, all 300 units are in the same specs and colour – Pearl White without the optional black roof.

As mentioned, this is a study and not a commercial subscription programme, so participants will have to consent to having a GPS telematics system fitted in the car. This is so that P2 can study driving and usage patterns. The subscriber will also need to submit regular reports to Perodua, currently scheduled at once every quarter.

Moving on to the car, the Ativa Hybrid is essentially a CBU Japan Daihatsu Rocky e-Smart Hybrid rebadged to be a Perodua. The P emblems (front, rear, steering wheel) and Ativa wordmark were fitted on Malaysia-bound cars by DMC in Japan, and there’s no ‘T’ (for turbo) badge on the tailgate, which is plastic. Note that the rear number plate cutout is a small JDM square. From this point, I’ll be calling the Ativa Hybrid the Daihatsu Rocky to make it less confusing, as we’ll be comparing it with the Ativa Turbo. 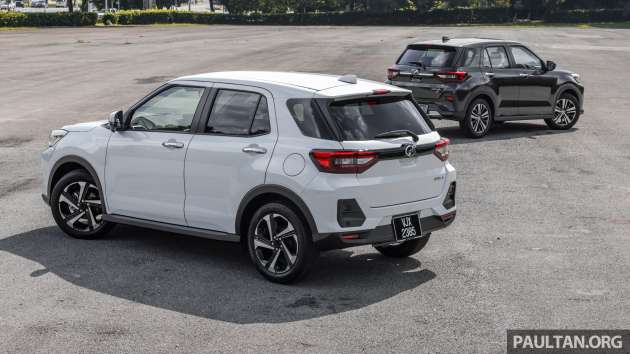 The white paint accentuates the Daihatsu Rocky’s front end, which as you can see, is very different from the face that P2 designed. The Ativa grille is wider and is joined to the headlamps, with chrome strips emphasising this. It gives an impression of width to what is a rather narrow car, which I like. The Rocky’s narrower grille has a cascading scaled insert, which sets it apart from the Ativa’s horizontal lines.

Daihatsu uses triangular cutouts for the fog lamps while Perodua employs inverted ‘L’ shapes – the same motif is repeated on the rear bumper. Speaking of bumpers and grilles, the Rocky’s is cut very abrupt at both ends – you can see the sharp, vertical look clearly in profile. In contrast, the Ativa’s front grille is more protruding and the bumper’s edges sit slightly further out. This gives the Perodua marginally longer dimensions and a more ‘natural’ look, for the lack of a better descriptor.

Other ‘spot the difference’ points include the trim bridging the headlamps (full black for Rocky, part chrome for Ativa), the lack of skid plate-style silver trim at both ends on the Rocky and the JDM car’s smaller and rounder wing mirrors. The Rocky’s passenger-side mirror adds on two small mirrors showing the kerb. Also, the Rocky’s mirror caps are body-coloured; they’re black on the Ativa, no matter which colour you choose.

Because the Ativa is such a familiar sight now, the Rocky stands out with its unique face. And those cool wheels. The 17-inch two-tone rims are in a much more dynamic blade-style design, but the tyres are less dynamic – it’s a hybrid, so efficiency is paramount with the Dunlop Enasave eco tyres, versus the Ativa’s all-rounder Bridgestone Turanza T005A 205/60 touring tyres. The Hybrid’s 195/60 tyres are also narrower.

By the way, the wheels on these two cars cannot be swapped. The Rocky’s rims have five lugs (better for heavier cars, P2 says) while the Ativa has four. As is typical for hybrids, there’s no full size spare here, just a tyre repair kit in the boot’s sidewall.

As mentioned, the Rocky’s tailgate is plastic. This is not unusual for cars in Japan, but car companies typically change the hatch to metal for the Malaysian market to match the local mindset of steel being stronger. An example of this is the T32 Nissan X-Trail. Another area that has been tweaked to suit local needs is the suspension – the JDM Rocky’s setup is 15 mm lower and it’s softer sprung too. Before we move inside, note that the keyless entry for the Rocky works on both the driver and passenger side doors, as opposed to only on the driver’s side for the Ativa. P2 says that its method – single touch to unlock only the driver’s door, double touch to open all – is for safety. We can get behind that, but sensors on two sides does add some convenience.

Once inside, you’ll find that the Hybrid features a high centre console incorporating an electronic parking brake (with auto hold, as per the Alza AV) and two deep cupholders. In contrast, the Ativa’s centre console has a “valley” between the gear area and armrest, and a manual handbrake resides here along with dedicated lock/unlock buttons. The latter is a feature that’s missing on the JDM car. Win some, lose some.

Further up, the Daihatsu comes with its own climate control panel. This single-zone AC cluster has two knobs and an auto function. P2’s unit in the Ativa has no auto mode, but I find its unique two-position memory function to be incredibly useful – P2 owners, would you trade memory for auto? Personally, I won’t as I never use auto anyway, but I do think that the Daihatsu panel looks better. Beside that, the push start button is blue on the hybrid, and the JDM car also gets seat heaters.

Moving on, the original Japanese head unit has been swapped for a local Ativa unit, but this also means that there are no audio steering buttons and reverse camera on the rebadged cars. Technically, Perodua could have added those on, plus a dashcam, but perhaps it was too much work. These are features that once you’re used to them, it’s hard to go back to the old way of doing things, so acclimatisation is needed.

The “lower spec” feel of the Hybrid that P2 ordered is apparent upon first contact – its key fob has two less buttons and feels empty as a result. That impression is affirmed by the empty buttons on the steering wheel, the AV’s red highlights and the local top spec car’s two-tone leather seats. However, it didn’t take more than a few kilometres for my bum to prefer the Japanese seats, which are softer and a fair bit more comfortable.

As for fit and material quality, it’s pretty much the same for both. These aren’t expensive cars and they’re not pretending to be premium either. Instead, the dashboard has a unique design, strong shapes and a geometric theme going on. Look very closely and you’ll find different grains for the main dashboard piece.

Finally, hybrid-specific features include unique meter markings such as Eco/Power/Charge instead of the usual tachometer (there are a couple of looks to choose from, like in the Turbo) and a power flow page in the multi-info display.

There’s also a Smart Pedal function for one-pedal driving, and the S-PDL button is where the ADAS buttons are. Single pedal driving brings plenty of regeneration and “engine braking” into play – once you’re used to S-PDL distances, the brake pedal is reduced to occasional use, such as light taps for the car to come to a complete stop.

The Hybrid is powered by a 106 PS/170 Nm electric motor, with a 82 PS/105 Nm 1.2 litre WA-VEX Atkinson-cycle three-cylinder naturally aspirated engine acting purely acts as a generator for the hybrid battery. The e-motor powers the wheels via an HEV transaxle, which means that this series hybrid model works like a range extender electric vehicle, like Nissan’s e-Power system.

Unlike Honda’s e:HEV hybrids, there’s no direct drive connecting the ICE and the wheels, although in practice, Daihatsu’s ICE – when active – feels directly connected to throttle movements. By the way, the Hybrid’s ICE is a 1.2L NA unit, whereas Malaysian-made Ativas use a 1.0L turbo with 98 PS and 140 Nm.

The Hybrid’s claimed fuel consumption is 3.6 litres per 100 km on the WLTP cycle, which is 27.8 km/l. Perodua says that it’s capable of 31.3 km/l in the Malaysian Driving Cycle, which is supposed to reflect local driving conditions. That means that at the current RON 95 price of RM2.05 per litre, a journey from KL to Penang (358 km) can cost as low as RM23 in fuel.

Sounds too optimistic? We’ll try it out and share our findings. On paper and based on looks, which do you prefer – Hybrid or Turbo? Also, what do you think of the RM500 per month subscription programme? Great deal or would you prefer to own the car after you finish paying for it? 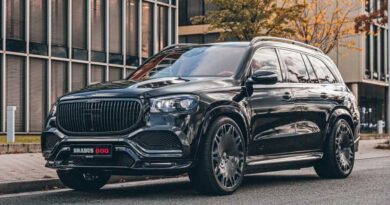 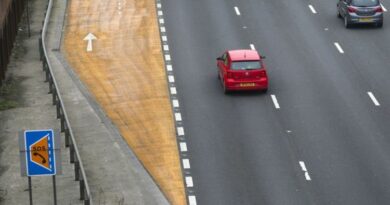 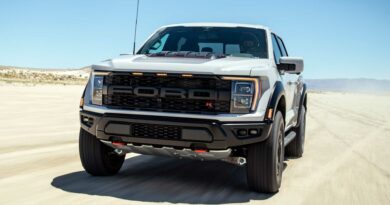