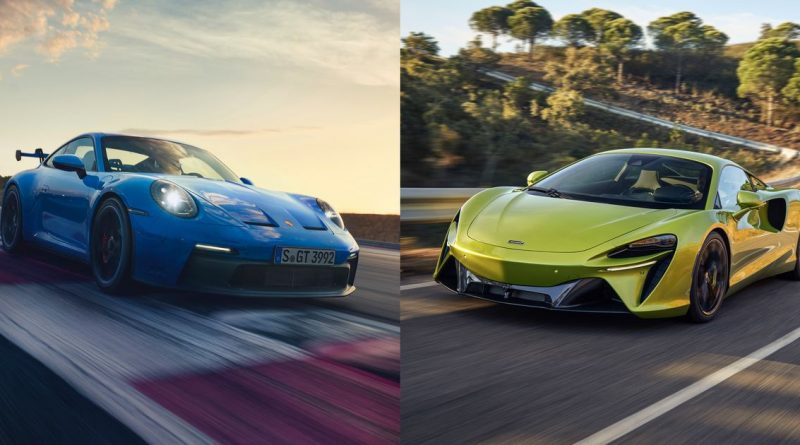 What a fight we have on our hands. It’s the old school versus the new order in what promises to be a titanic scrap that will only even happen in this era, right now. In the blue corner is the champion prize-fighter, the known quantity and the established fanbase’s hero, while in the red corner a new challenger has stepped up, a little heavier and with an even stronger punch aided by clever technology. It’s the new kid and has to prove itself, but it’s got all the tools to take down the champ.

Coincidence brought the releases of the 992-era Porsche 911 GT3 and the McLaren Artura together on the same day but it’s the exact opposite that created them so differently. Porsche is deliberately – after a fair amount of boardroom tug-of-war – staying faithful to the formula it alone has mastered: rear-engined, rear-wheel drive and a mesmeric flat-six with a 9000rpm rev ceiling. There’s not a whiff of electrical propulsion or eco-conscience, and its buyers like it that way.

Conversely, McLaren has thrown its own rule book out of the window, fetched a flame-thrower from the shed and torched it into ash. The Artura has a new chassis, an all-new engine, a new part-electric drivetrain and ancillaries, a newish interior and, of course, a new model designation. Its starting price is nearly £60,000 more than the GT3’s and it’s a lot more complicated in some ways, but its customer base will still overlap the Porsche’s to an extent.

This isn’t a normal period for the industry; it’s totally extraordinary. At no other times in history do you get such a glorious dichotomy as when one technology wholly supersedes another as electric power will do to internal combustion. Much like horses became beasts of leisure, not work, internal combustion will be kept alive as a hobby by those with the means. When that happens there’ll be a very different lens through which to view the 2020s, but right now, as the market begins to spread its efforts out to almost every one of its myriad corners, we’re being offered some incredible contrasts.

Take the 911’s fairly straightforward mechanical and chassis tweaks that extract a phenomenal 17 seconds more out of the 20.6km Nurburgring lap compared to the old one. Moving to motorsport-type double-wishbone suspension at the front, adding width and GTE-inspired aero features has made a significant difference without changing the formula so loved by press and customers alike. It must be a wonderful thing; furiously aggressive and powerfully electric without ever needing to plug in, and with rich heritage stretching back to the mid-20th Century.

The Artura’s brand new 120-degree V6, built to be as compact as possible when all the extra parts like turbos, transmission and exhausts are added, is the total opposite. Brand new, with an unusual and seldom-built V-angle and a deliberate focus on hybridisation, it’s a lot of things the GT3’s flat-six isn’t. Just about the only thing they share is the cylinder count. For your extra £60,000, though, the McLaren gives you a considerably more powerful combustion motor despite giving away a full litre of cubic capacity.

That’s before you even factor-in the electric assistance. All of a sudden the people’s champion starts to look very much outgunned to the tune of 168bhp and a great big slug of torque through the midrange. In what sounds like another minor miracle worked by the Woking brand, the Artura is also only 60kg heavier than the Porsche. Consider our gobs smacked on that one.

The GT3 embodies pure analogue ICE adrenaline in saleable form. You can get it with a manual gearbox, it will rev to 9000rpm time and again without popping, it will smash laps of any given circuit until the tyres need replacing and like previous GT3s it will also be easy to live with if you’re a proper enthusiast and want to use it every day. It’s the very best manual super-sports car that humans can reliably build for the road at a price that enough people will pay.

The Artura is a hell of a way for McLaren to step into its new reality. More power than the frighteningly quick 650S of not so long ago, the ability to cruise 18 miles on electric power and a hybrid setup designed for performance as much as emissions, it’s a miniaturised P1 for less than a fifth of the cost. That it was unveiled on the same day as the 992 GT3 is remarkable; that it exists in the same time in history to fulfil broadly the same everyday-supercar objectives is testament to the enormous state of flux the automotive industry is living through.

A hell of a fight looms between the GT3 and Artura, despite the obvious performance bias in the McLaren’s favour. In more ways than one it’s a fight the GT3 can’t win, but nevertheless we hope with every fibre in our beings that someone eventually gets them together for the brawl we all want to see. We suspect it will depend on the tester as to which of these two legends in their own time comes out on top, but when in 10 months’ time it comes to summing up CT’s highlights of 2021, we know we’ll be talking about both. 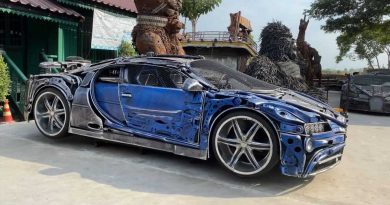 Bugatti Chiron Replica Made From Scrap Metal Is Automotive Steampunk 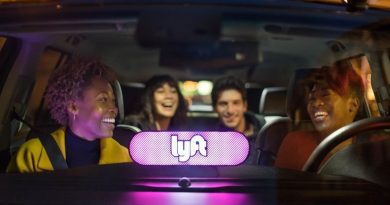 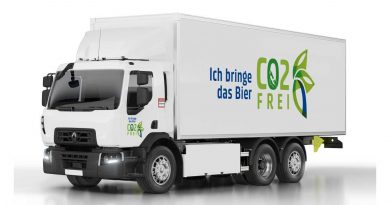