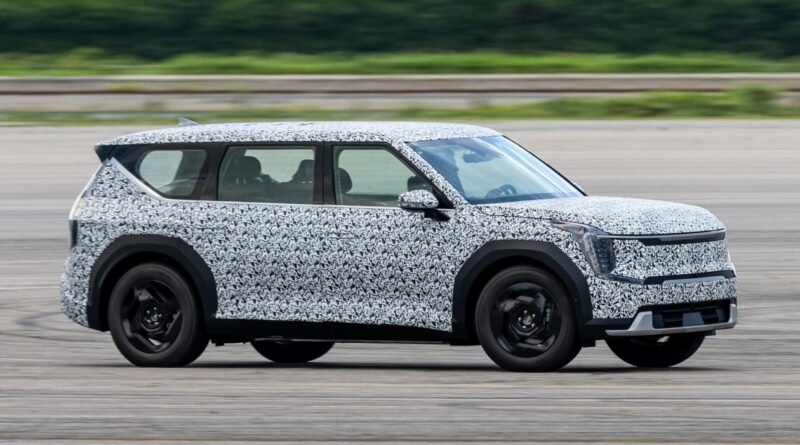 We’ve spied the upcoming Kia EV9 testing before, but this is the first time we’ve seen Kia’s official images of its new all-electric large SUV. The Korean firm has also revealed the EV9 will debut at the beginning of 2023, with it expected to hit UK markets later next year.

We first saw the family-friendly flagship EV9 in concept form at last year’s LA Motor Show and it looks like most of the concept’s boxy proportions will be carried over to the finished model.

At the front, Kia’s signature ‘tiger-nose’ design cues can clearly be seen, while the grille will be completely blanked off for this EV-only model. There’s also a smaller grille underneath with thin vertical LED headlight strips to either side.

The side profile shows the EV9 is fairly toned-down in terms of the angular creases and boxiness seen in the concept. These changes will no doubt have been affected by the prioritisation of aerodynamics to maximise range. Even still, the chunky wheel arches and angular wing mirrors (not rear-facing cameras like on the concept) should help the EV9 stand out in a sea of large SUVs. The door handles sit flush with the bodywork to further the EV9’s aerodynamic efficiency.

At the rear we expect the concept’s rising windowline as it approaches the rear pillars to remain, as will the show car’s rear lights and roof spoiler. The Concept EV9’s ‘triangular aero design’ 22-inch wheels have been swapped for a smaller set of still quite funky rims when it comes to the production-ready model.

These images were taken at Kia’s global Namyang research and development in Korea and highlight some of the tests the EV9 is currently undergoing.

We’ve not seen inside the EV9 yet, although we expect plenty more inspiration from the concept car. A 27-inch widescreen display would be one of the largest screens fitted to a production car (still smaller than the 31-inch unit in the new BMW 7 Series, however), and it’ll sit high up on the dash. We also expect a fairly minimalist cabin design, with few physical buttons but don’t think the concept’s one-spoke, oval steering wheel will come to market.

In the Concept EV9 the cabin can actually change its layout depending on which of its three settings is selected. There’s ‘Active Mode’ for a traditional driver-focused set-up, while ‘Pause Mode’ rotates the front and third-row seats around, turning the second row into a table to mimic a “first-class lounge”. ‘Enjoy Mode’ sees all three rows of seats face the tailgate, which opens to give occupants “the opportunity to connect with the outside environment”. While the EV9 will probably stop short of rotating the seats, we think there’ll be a selection of modes to alter the cabin’s feel.

At 4,930mm long, 2,055mm wide and 1,790mm tall, the Concept EV9 is larger than the Sorento SUV, the firm’s range-topping model in the UK and 1cm shorter than the North American-market Telluride. We don’t expect the EV9 will deviate too much in size from its concept. Unsurprisingly, it will sit above the EV6 in Kia’s electric SUV range, offering three-row seating to rival the likes of the Mercedes EQB and upcoming Hyundai Ioniq 7.

Just like the Ioniq 7 that’s due in 2023, the EV9 will be based on the modular E-GMP platform. This means we could see the EV6’s 77.4kWh battery being made available for the EV9.

The EV6 has a maximum range of 328 miles, so expect a bit less in the EV9 due to its extra size and weight if this pack is carried over. Of course, Kia could enlarge the battery for this bigger, heavier and less aerodynamic model, with the larger wheelbase providing scope for this in future as well.

Just like the EV6, the EV9 should also offer single and dual-motor options, while its 800V electrical architecture will allow super fast charging speeds of up to 350kW.

The Concept EV9 is a core part of Kia’s plan to become a “Sustainable Mobility Solutions Provider”. It aims to achieve carbon neutrality throughout the firm’s value chain by 2045 – through logistics, vehicle production, vehicle use and disposal. 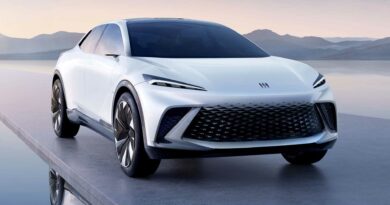 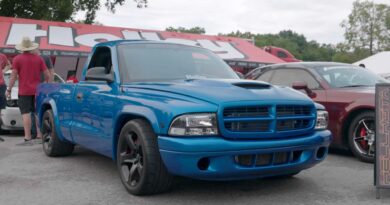 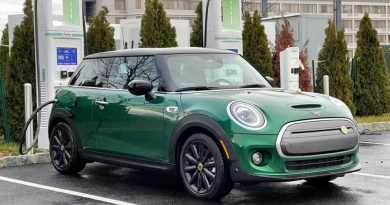