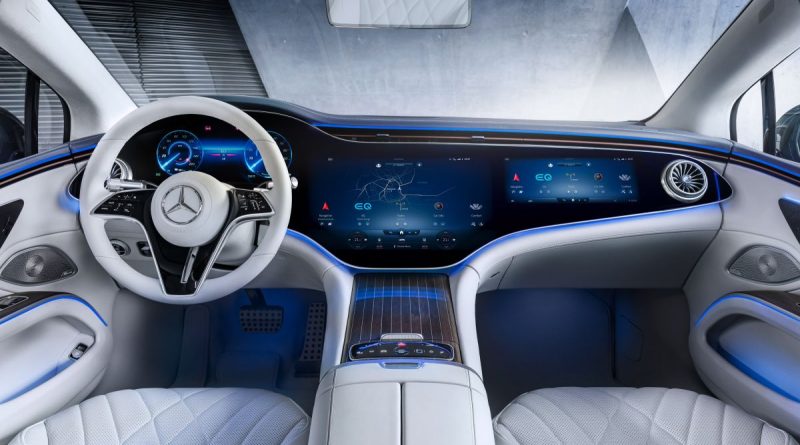 The slow reveal of the Mercedes-Benz EQS continues with a detailed look at the all-electric sedan’s interior, which the company says was “designed for all senses,” namely visual, auditory, olfactory and haptic. The EQS will be produced at the company’s Factory 56 facility in Sindelfingen and will be launched in Europe this coming August.

In terms of visuals, the main highlight of the cabin is the optional MBUX Hyperscreen that incorporates three displays under a scratch-resistant aluminium silicate glass spanning 141 cm across the entire dashboard. The three displays include a 12.3-inch unit for the driver, a 17.7-inch central unit and another 12.3-inch screen for the front passenger.

Base variants of the EQS without the MBUX Hyperscreen will get a different setup that is similar to what you’ll find on the latest S-Class, which does away with the front passenger display. Additionally, the central screen is resized to 12.8 inches and adopts a portrait layout, while the 12.3-inch driver display stands alone and forgoes a cowl over it. The lesser option also gets a different centre console design that only accommodates a storage cubby, with quick controls for the drive modes, media controls and other functions being relocated to the dashboard, along with engine start/stop button. On cars with the MBUX Hyperscreen, these are kept within reach on the centre console.

Other notable visual cues include the wide-width slim air vents that stretch across the dash and blend seamlessly into the door cards, which have door handles the mimic the shape of the seat controls. The lack of a conventional transmission tunnel also allows additional storage space below the centre console, while premium materials and a comprehensive ambient lighting system make things even more pleasing to the eye.

The EQS comes with one of two steering wheel designs depending on the chosen interior package, with different trim designs available for variants without the MBUX Hyperscreen – a pinstripe and tiny Mercedes-Benz logos are pictured here.

The Mercedes-Benz User Experience (MBUX) system is as we’ve previously described, with crisp visuals and formidable hardware to power everything. This includes a more advanced artificial intelligence system that allows the Hey Mercedes digital assistant to recognise more commands and a “zero-layer” design that serves up relevant functions after analysing user habits.

Rear passengers aren’t left out either, with the MBUX High-End Rear Seat Entertainment Plus package being offered as an option. This adds on two 11.6-inch displays with touch controls on the back of the front seats, and customers can also specify a fully-fledged tablet for greater convenience.

On the olfactory (sense of smell) side of things, Mercedes-Benz is particularly proud of the EQS’ optional Energizing Air Control Plus package. This includes a HEPA filter that has nearly the surface area of an A2 piece of paper and is placed under the front bonnet of the car.

The filter is capable of trapping particles as small as PM 2.5 to PM 0.3 and is 99.65% efficient, with the “OFI Quality Seal ZG 250-1” from the Austrian Research and Testing Institute (OFI). Air filters with this certificate reduce bacteria and viruses particularly effectively directly at the filter, which is apt considering the state of the world we live in currently.

Meanwhile, the Air-Balance package comes with a new fragrance developed specifically for the EQS – No.6 Mood Linen – with the number six being a historical nod to the “Mercédès Electrique” vehicles that joined the model range way back in 1906. The company describes the in-car fragrance as having a hint of fig that is rounded off with linen to give the impression of fig tree standing at a high elevation. To engage the ears, the EQS plays sounds to greet the driver and/or passengers as they approach the vehicle, while the cabin itself contains a 15-speaker Burmester sound system. The car’s Energizing Comfort system taps into the sound system, with three Energizing Nature programmes – Forest Glade, Sounds of the Sea and Summer Rain – being new additions.

These programmes were developed alongside acoustic ecologist Gordon Hempton, and are meant to create a more relaxing ambiance while on the move. Should you want to take a break at a service area or charging station, there’s even a Power Nap programme that adjust the driver’s seat and closes the side windows and roller blinds for a sleep-promotion atmosphere.

All these technologies and features help to ensure the EQS is a serene place to be in, complementing the performance that the car’s all-electric powertrain offers. The EQS is the first car to be underpinned by the brand’s Electric Vehicle Architecture (EVA), and we should get even more details in the next few weeks. 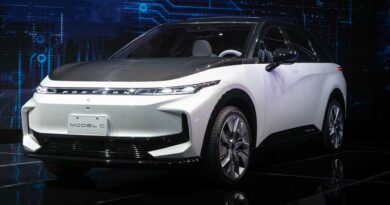 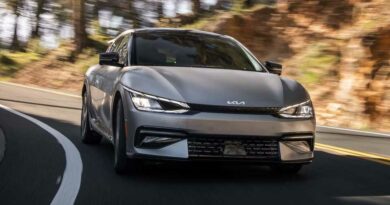 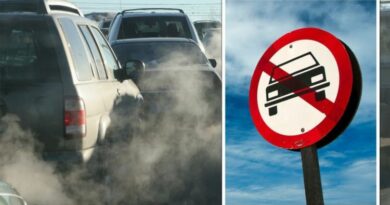