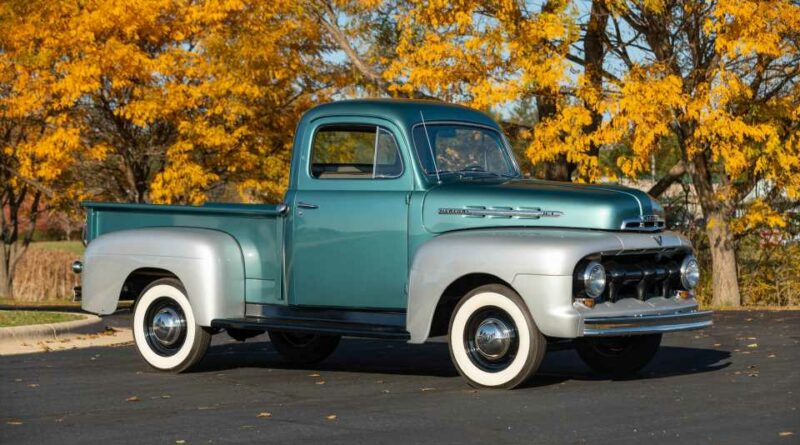 When someone mentions Ford Motor Company’s Mercury brand, images of exciting cars like the Cougar, the iconic late 1940s Eight sedan (usually turned into a “lead sled”), or even imports sold through their dealerships like the Capri or the Merkur XR4Ti. What isn’t always brought up is the brand’s line of pickup trucks. Yep, you’ve read that correctly; There was a time that Mercury built trucks that were sold in Canada, and we’ll detail that history thanks to this 1951 Mercury M-1 pickup going on the auction block at Mecum Kissimmee in 2023.

A New Era for Ford and Mercury

During the 1950s, Mercury was seeing some success with its latest designs that catapulted the brand to be the sixth-most popular in the U.S. It was also around this time that Ford began a new line of pickup trucks that would become its most popular vehicle of all time, the F-Series—originally called the “Bonus-Built” trucks because they offered “bonus” features like a larger cab, better seat padding, easier steering, and a one-piece windshield. It also featured standard items like an ashtray, glove box, and driver’s side sun visor that were all optional and unusual to have on other trucks of its era.

It was the same time that Ford of Canada had split its sales divisions into Ford and Lincoln/Mercury networks while adding in Monarch and Meteor sub-brands in the country. This is when Ford of Canada decided that, because of this brand split and the fact that very few rural communities in Canada had both a Ford and a Mercury dealership, it would be a great idea to bring the F-Series north of the border under both Ford and Mercury branding. Each brand’s trucks were the same for the most part, but where Fords were sold as “F-Series” trucks, Mercury’s were sold as “M-Series” and followed their designations for Gross Vehicle Weight Rating (GVWR), just as early Fords did. However, by 1951, both Mercury and Ford switched over to a simpler designation like F-1, F-2, and so forth, but Mercury brands still used “M” rather than “F.”

Other differences for 1948 to 1968 trucks were mostly related to its exterior trim. Inside, there were Mercury specific trims until 1961 to 1966, where only the classic gear and lightning bolt symbol was found on the steering wheel horn button. Other than that, these trucks were no different inside from that same year of Ford F-Series. Then from 1967 to 1968, it was all Ford trim inside with no Mercury branded items found at all. The outsides of these trucks would get Mercury branding on the grille and tailgate, but the trim and moldings remained mostly the same between F-Series and M-Series. Mercury also got its own version of the 1960-1967 Ford Econoline known as the EM-series and its pickup variant, but were largely just rebranded Ford Econoline trucks. However, to avoid any tariffs related to crossing the U.S.-Canadian border, all trucks were built at Ford of Canada’s Oakville Plant in Ontario.

Unfortunately, the writing was on the wall for Mercury trucks by 1965. The Auto-Pact was signed and opened up the U.S. and Canadian border for tariff-free transportation of vehicles that was on the books until 2001, being effectively replaced by the North American Free Trade Agreement (NAFTA). Even as that agreement allowed the Oakville plant to ramp up production of trucks, Mercury’s M- and EM-series pickups were stopped by 1968.

Mercury trucks were also never sold in the U.S., even after the Auto-Pact was law. Mercury would live on as a dwindling counterpart of Ford until 2011 when dropped to just the Mariner (a rebadged Ford Escape) as its only truck/SUV offering after the Mountaineer was dropped in 2010. The Oakville plant is still in use and is the location for production of the Ford Edge and its Lincoln counterpart, the Nautilus.

This would be the first year that both Ford and Mercury switched over to their simpler tonnage designations, but overall you’re looking at the Mercury version of the F-1 pickup from 1951. This particular truck has had a very extensive restoration, according to Mecum, and has only been driven 620 miles since that was done. The interior is spartan with the only “Mercury” branding being on the horn button. Outside, you’ll find a tasteful teal and silver two-tone treatment with black painted wheels, running boards and grille.

Of course, being a truck of the 1950s, you’ll find two large chrome bumpers at either end along with chrome on the hub caps, molding, and other trim pieces. The upper grille and louver trim on the hood and embossed lettering on the chrome hubcaps and teal tailgate get all of Ford’s M-brand’s icons, but you’ll also notice a familiar badge on the body panel just above the grille: the iconic “V8” badge from Ford. That means that you’re not just looking at a three-speed manual pickup with a floor shifter, but one packing the legendary 255 cu in (4.2 liter) Ford Flathead V-8 engine under its massive hood that could also be found in Mercury cars in 1949 to 1953.

Other features found on this immaculate restoration include a heater-defroster, pushbutton AM radio, a finished and treated wood bed with painted retaining strips, bias-ply 16-inch whitewall tires, and a rubber floor mat. This truck will also go across the auction block during the 2023 Mecum Kissimmee Auction that takes place on January 4-15, 2023 in Kissimmee, Florida. This is only one of a large number of restored and modified vehicles and motorcycles that will be offered for sale during the 11-day event. 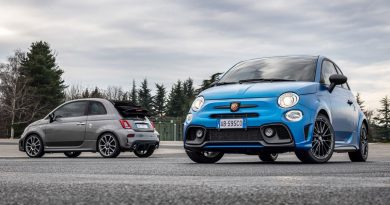 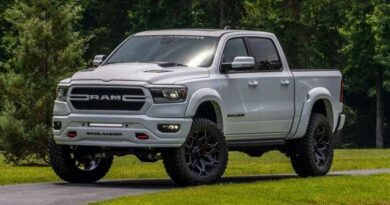 Ram Badlander Was Made To Conquer 'Any Terrain In Rugged Luxury' 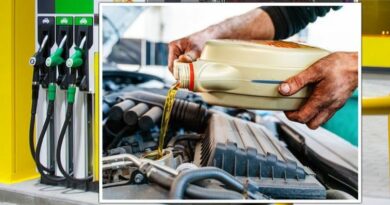