Top Gear America host Dax Shepard’s car love is no secret. He was on Conan talking about his 700-horsepower Buick Roadmaster station wagon, and he’s appeared in MotorTrend previously showing off his garage. There’s much more to Shepard’s car obsession than what he owns, though.

“I’m in to all cars,” Shepard told us. “I can’t think of a … Well that’s not true. I’m not dying to drive something pre-’40s, but I like most everything you put gas in. I’m super into motorcycles. I’m really into off-road and I like classic cars; I think I have an eclectic taste in classic cars. I generally like when people take a car that no one else recognized as cool and then make it cool.”

Related: It’s time to kick some asphalt! Buckle up and join us for the joyride asTop Gear America starts streaming January 29, only on the MotorTrend App. Get ready with a free trial today!

This is a key tenet of Shepard’s car philosophy: Nothing is sacred. Anything can be improved in performance, appearance, and comfort. As his restomod ’67 Lincoln Continental sedan demonstrates, he has no issue tearing up a classic to build something cool.

“I do not revere numbers-matching, or original paint, or any of that shit,” Shepard said. “I have lots of favorite movies from the ’80s, but I don’t watch them on a 17-inch Zenith TV. I watch them on a 78-inch TV. Even though they’re still my favorite, I want it to be the best that it can be. So I want cars to stop and accelerate and turn. I’m not a purist by any stretch. I would probably gut any car.”

The Continental is no doubt the most famous example, having starred in his 2012 film Hit and Run. Its old MEL 462-cubic-inch V-8 is long gone, replaced with a 700-hp fuel-injected Ford Racing crate motor, which laid plenty of rubber in our parking lot as he left the building. Big wheels, coil-over suspension, and Wilwood brakes round out the build.

His life growing up in Michigan didn’t start with 700-hp cars, even though he and his mother both worked for General Motors at one time or another. Shepard’s first car was a ’76 Pontiac Catalina he bought for $400 because it was cheap and it had a big-block. Before long, it was replaced with an ’84 Mustang.

“In high school, I had an ’84 Mustang GT that I took the engine out, rebuilt it, and did everything on that car because I was broke. I did everything on every car I had until about 15 years ago when I started making money, but less and less. Back then, cars lasted a few weeks. My ’84 Mustang, I got it in ’92. So seven years old, already a terrible piece of shit. The passenger seat, the weld broke and it was all over the place. The heater core went out in it, six years old. Everything was. The f–king shocks were shot.”

Shepard does still try to work on his own cars, but with a full-time acting career and a full-time dad career, he also occasionally employs HOT ROD Garage co-host Lucky Costa.

“I’m trying to think the last thing I did,” Shepard said. “I put rotors and pads and shit on my E 63 station wagon. I think it’s the last mechanical thing I did.”

“I love wagons so much,” he said. “In fact, I think I could see myself getting two or three more wagons over the years. There’s so many good ones. Even within the supercar world, I like the shooting brakes. I’m deeply interested in that Ferrari FF ,and I’m delighted that the resale value is less than great because it makes me think it’s in the realm of possibility at some point. I guess I mostly like awkward, weird stuff that’s fast. And I love sedans that are fast. There’s something about fast sedans.”

Like any good car guy, he isn’t satisfied with the five cars, five motorcycles, four off-road toys, a shifter cart, and a pair of trailers littering his Southern California ranch. He’s got his eye on several more, and even has plans for housing them all.

“I don’t drive all of them,” he said. “I’m mad I don’t drive all of them, and yet I’m actively, weekly looking at new cars I must acquire. I’ve got a couple that I’m circling right now. I keep going back. I keep looking at ’05, ’06 Bentley Continental GTS because they’re free. They’re free. They’re like 1/10th of what they were new. No miles with a W-12 twin-turbo and all-wheel-drive Volkswagen stuff. I’m like, ‘I should have this thing. Just take dirt roads going 70, who cares?’ That and all those, like the CL 55 and CL 63, those AMGs, those are free, too. You can get those for like in the teens with no miles.”

“What I like about off-road is the barrier to entry is so much cheaper. To go do a track day is always, who’s running the track? Whereas Glamis, Ocotillo, Gorman, you just show up and the whole place is yours and there’s no rules, and I love all that.” —Dax Shepard

Even though his fix-or-repair-daily days are behind him, there are cars out there that make him want to get back under a lift.

“What I really, really want to build,” he continued, “is a ’68 to ’72-ish Blazer, long travel Blazer. That’s really, really what I want. Something, though, that is civil enough on the inside that my wife would drive it. But I want, basically, a sand dunes taxi when I have my whole family out there to go to this restaurant, Duner’s Diner, which is about 20 miles through the dunes. I really want that.

“I’m thinking more and more about building a B-body ’94 Fleetwood, but three pedal, yeah. Those are the two that I’m closest to endeavoring on, but the whole issue I have currently is I don’t have room for all this stuff. We’ve been building a new house, and I’m building a barn there. So that should open up the floodgates to maybe one or two more builds.

“It won’t even be that big. When I say ‘barn,’ I’m playing it fast and loose with the term ‘barn.’ It’ll look like a barn, but it’ll probably hold five cars and maybe eight motorcycles in it. Well, with the lift, maybe six cars.”

Besides the Blazer, you can bet future builds will include more off-road stuff. In addition to previously owning a Class 3 Baja car, Shepard counts among his current collection a 1,000-hp twin-turbo LS3 sand rail.

“What I like about off-road is the barrier to entry is so much cheaper,” he said. “To go do a track day is always, who’s running the track? Whereas Glamis, Ocotillo, Gorman, you just show up and the whole place is yours and there’s no rules, and I love all that. So just the convenience of off-road. I also like that there’s a third dimension to it, so it’s not just cornering and accelerating, braking, but I love that there’s jumping as an aspect, that it becomes multidimensional.

“I’ve been crazy lucky,” he continued. “I’ve gotten to drive a ton of shit and be on a bunch of different tracks, but I don’t think there’s any driver’s sensation that compares to the dunes. Wheelie-ing over the tops of dunes and then just dropping down and there’s cornering and braking and keeping the front end light. There’s so much going on. It’s so stimulating. I think it blows away pretty much everything else.”

Of course, the dunes are also where Shepard had his biggest wreck.

“Not a big crasher,” he said. “Gone off the track a couple of times, but not in a colossal way that caused any damage. I really haven’t. I’ve cartwheeled a Razor once. That’s probably the only thing. I went end-over-end in a Razor in the sand dunes. We ripped off all of the control arms up front, but we had to drag it back with a sand car in reverse. The Razor had to be in reverse. Nothing on the front end was attached anymore. But yeah, I think that’s the only wreck I’ve had.”

He’s also gone down on a motorcycle, which ended in a shoulder surgery, but that hasn’t kept him off bikes.

“One of the first questions Jethro asked me when I met him was, ‘Why do you ride bikes?'” he said. “And I’m like, ‘Very simple: sub-400 pounds and 200 hp. Where are you going to find that power-to-weight ratio?’

“Also, what I love about bikes is, similar to off-road, you can’t destroy one. I’ve had a [Suzuki] GSX-R drag track bike for 10 years. Now I have a [Yamaha] R1 track bike. Never have replaced the pads. I do an oil change every 3,000 miles. You can just fu–king drive them and ride them at 13,000 rpm indefinitely and they’re fine. Like a track car, you’re constantly putting shit on. Tires, brakes, all this stuff, but a motorcycle, man, there’s not a better bang for the buck. Also, you can’t spend 25 grand on a motorcycle, you know? I’m super into Ducatis. It’s like a Ferrari for 20 grand. It’s crazy.”

Stream TOP GEAR AMERICA on January 29, 2021, on the MotorTrend App. In the meantime, sign up for a free trial today and start watching 8,000+ episodes of hit car shows! 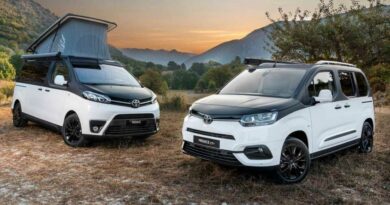 Toyota Proace Camper Is A Nifty $45,800 Motorhome The US Should Get 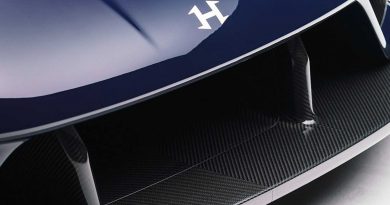