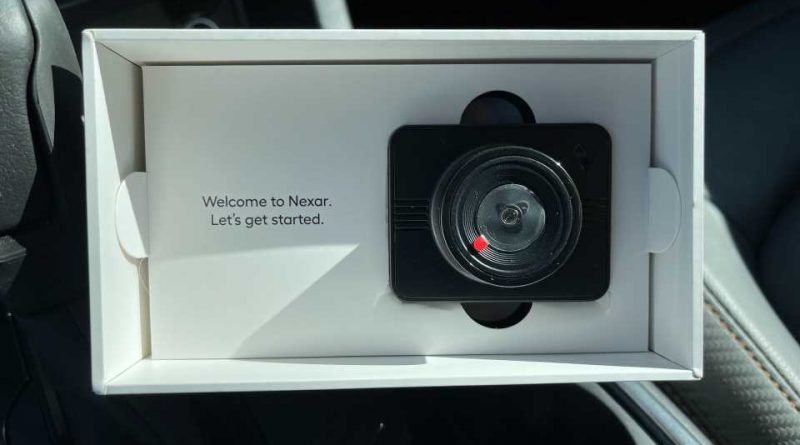 A car accident can be one of the most jarring and expensive experiences you’ll have. Most of the time, the other driver sticks around and is helpful to both you and the police. That’s not always the case. Sometimes, it can be hard to determine who is at fault, and even if you think you’re doing everything right before and after the accident, it could still land on your plate to pay for the damage. And sometimes people just, you know, take off and run. That’s when dash cams come in handy.

If you’re involved in a crash, dash cam footage can help clear your name if you weren’t in the wrong, and may even save you big bucks if your insurance company tries to screw you or it comes down to a court case over damages. The cameras, which are typically mounted to either the windshield or dash, capture footage in front of the vehicle—and some from behind—which can prove to be invaluable in showing which party is at fault in an accident. 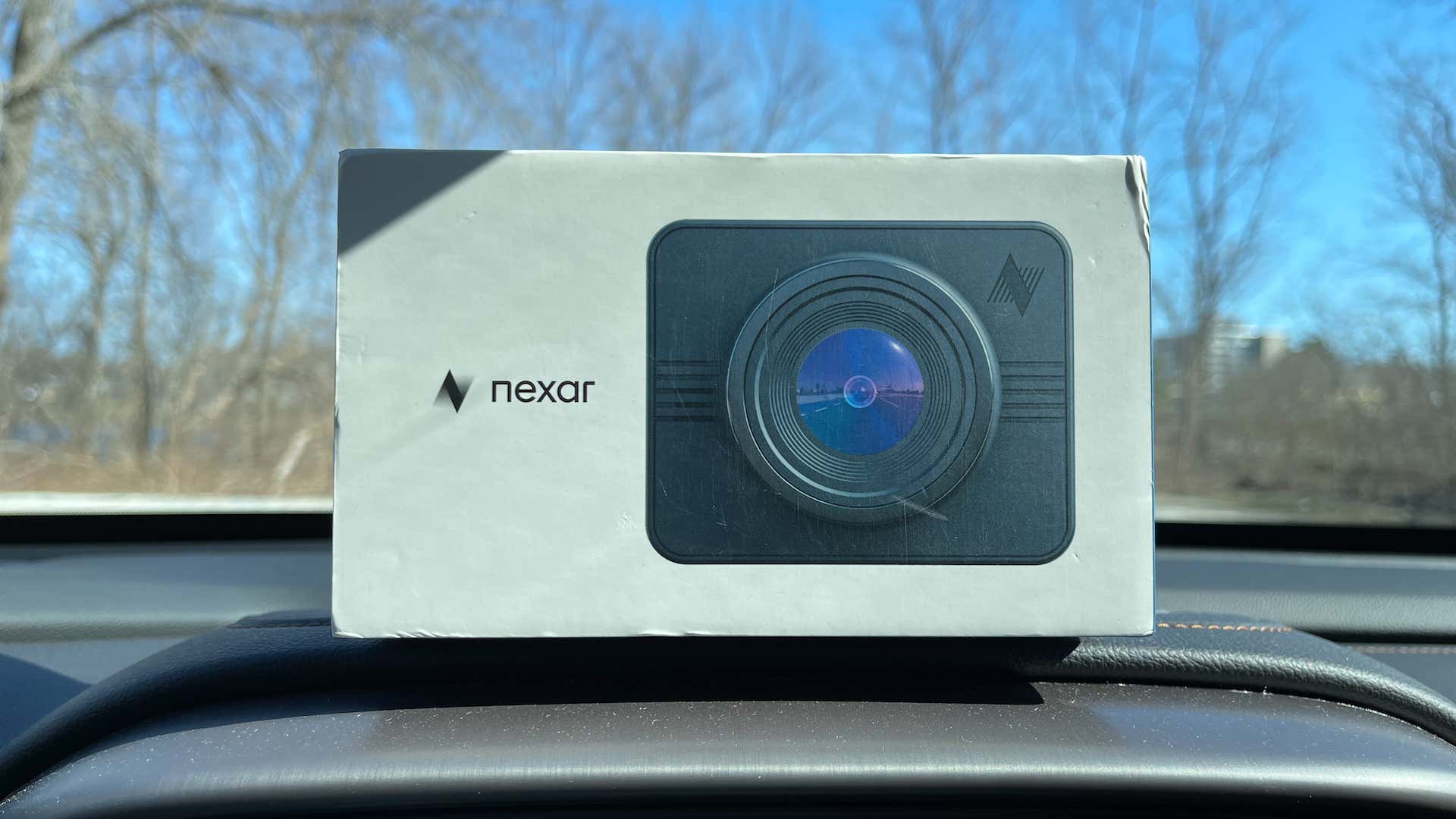 Dash cams have become big business as camera tech in general has evolved over the last decade, and there are now loads of models out there. Given the multitude of products, the next on our dash cam hitlist to try out was the Nexar Beam, which uses a smartphone app and clever sensors to detect action and capture video as it happens—and as of this writing, it’s $120 on Amazon. Like our Aukey review from a few weeks ago, we put the Nexar through its paces and our daily drives to see what’s what. Here’s what we found.

Our Initial Impressions of the Beam

The Beam is packaged much more like an iPhone than you’d expect for a dash cam. There are no shouty pictures or text on the box, and the unboxing experience is uncannily Apple-like. The unit itself is light and almost feels like a toy, but the compact size and shape are beneficial for outward windshield visibility. This thing looks dead simple to set up, too.

Getting After It with the Beam

Judging by the crummy images from Russian dash-cam videos, you might assume many models produce dreary CCTV-quality video, but that’s not the case. Many, such as the Nexar tested here, offer high-resolution video capture that shows intricate detail, both in daylight and at night. Because a dash camera is a daily use item, we wouldn’t recommend one that has physical cords. The Beam’s power cord is long enough to tuck out of the way, so we’ll give it a pass. That said, there’s still a power cable to contend with. 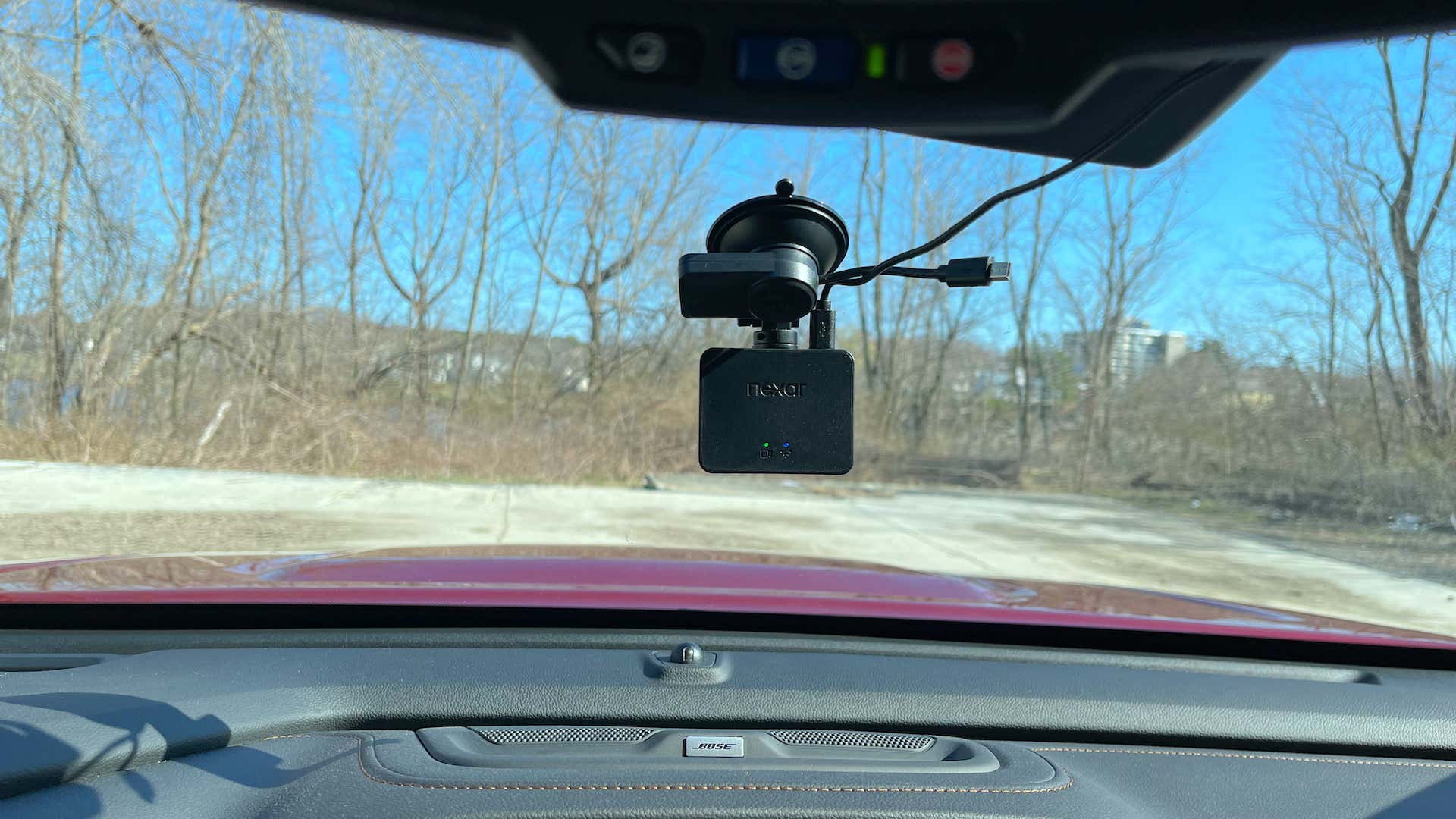 Mounted low for this image, the Nexar Beam is small enough to tuck away out of sight.

In more than a few cases, devices that require a companion app to function properly don’t always work as advertised, but not the Beam. In less than 15 minutes, I had the unit out of the box, the app downloaded, and the whole package paired and ready to go. It took me longer to find a way to conceal the power cable than it did to get the device set up, which is a problem that less finicky people won’t have to endure.

On the road, the camera maintains solid image stability and delivers great picture quality. It uses sensors to determine if there’s an event worthy of recording and captures clips surrounding the moment. It’s also capable of detecting bumps and shocks while the vehicle is parked, so it can notify you of a parking lot scuffle. If someone backs into your bumper or tries to break into the car, the camera can capture that.

If you’re the unsure type, as in, you need to see something working in order to believe that it’s working, you might be out of luck with the Beam. There’s a light on the back of the unit, but unless you want to stare at your smartphone while driving (don’t), there’s no driver-facing screen to glance at to triple-confirm that it’s recording. That said, it’s easy to pull over and get eyes on the film thanks to the super simple app.

What’s Dope About the Beam

The Beam is about as close to plug-and-play that you’ll see from any automotive device today. The process involves downloading a smartphone app, placing the camera on the windshield, and plugging it in. And that’s really it.

Syncing between the camera and app is quick and painless as well, which isn’t something that can be said about many devices with features driven primarily by a smartphone. The lack of a screen on the device itself isn’t a terrible problem, though viewing settings and quick film replays on a smartphone is both difficult and illegal while the vehicle is moving. No screen also makes it slightly more difficult to aim when placing it on your window, but that’s no problem once you hone your mounting spot. 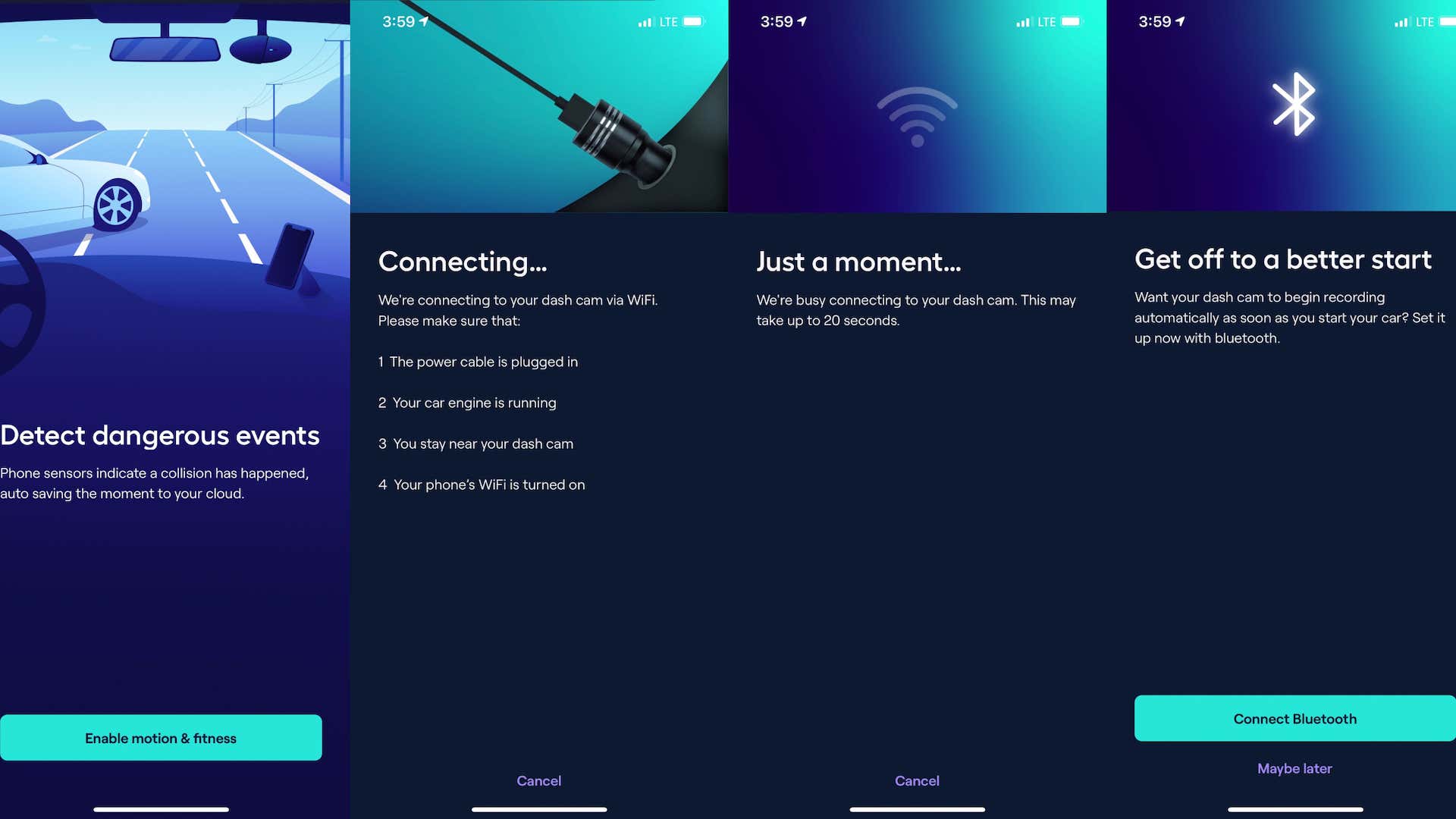 Sync and setup with the app takes less than a minute.

That ease of setup also translates to ease of use, so the Nexar is largely a set-it-and-forget-it device. It starts recording automatically when the vehicle is moving, and its ability to detect traffic events means that you’re less likely to miss important moments on the road. The Nexar app requests permission for access to your phone’s physical sensors, and uses them to determine when there’s something worth recording. I don’t live in a major metro area where I’d be constantly surrounded by tightly packed cars, but the parking sensors are also nice peace of mind, as the unit can notify you of a fender bender while the car is parked.

What’s Not About the Beam

My biggest complaint about the Beam is that it remains tethered to a 12v outlet. We live in a world where I can do 1,000 things through a smartphone app, including park a car, but I can’t have a wireless dash cam? That’s unacceptable. Though the Beam is far from the only offender, dangling cords should be a thing of the past.

The other major downfall here is with the smartphone app. Running on a three-hour round-trip, I noticed a significant battery drain on my iPhone 12 Pro. True, the phone can be plugged in, but what if your only charging port is taken up by the dash cam itself? This is one of those situations where having everything run by a smartphone is both a blessing and a curse. On one hand, it’s supremely convenient to be able to hit the road without much friction, but on the other hand, you’re relying on one piece of technology to control another. If the smartphone dies, freezes, or is otherwise incapacitated, you’re not going to get much value of the dashcam.

Our Verdict On the Nexar Beam

There are better dash cams on the market, but few offer the wealth of features and video quality that the Nexar Beam does, especially at its price. Dash cams in general are probably a better investment than something like a radar detector, if only for the peace of mind that you’ve got video evidence if something happens.

Even in GIF form, the video quality is solid.

The parking lot monitoring functionality is also a big plus here, and could alone warrant the price of the camera if you live in an area where you have to street park or leave your car in a busy lot during your workday. You won’t be able to catch every fender-bender, but some is better than none. 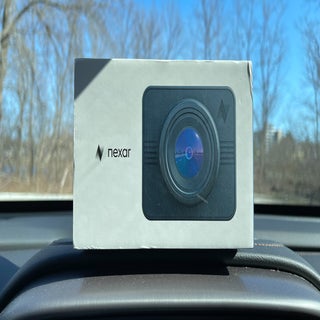 Getting a dash cam is probably a good idea this summer, and the Nexar Beam is a compelling package.

Q. Can I transfer video to a computer?

A. The Nexar Beam has the ability to upload its videos to a cloud drive, which can then be accessed on a smartphone or computer.

A. There aren’t any federal laws prohibiting the use of dash cams, but your state or region may have laws about what can be mounted on your windshield and where. Even if there are no restrictions, it’s best to keep the camera mounted out of your line of sight.

Q. Can the police use your dash cam against you?

A. In some cases, yes. If law enforcement believes that the recordings on your camera could be used as evidence, they may have a right to the footage. Check your local and state laws for clarity.

Q. Can I use my dash cam footage in court if I’m hit in an accident?

A. Yes. In all but a few cases, dash cam footage is admissible as evidence in court.

Q. Can I use a camera to record my vehicle’s cabin?

A. First, remind us not to ride with you. Second, you can record the inside of your vehicle, but many state laws require that you inform passengers that they’re being recorded. If you’re a rideshare driver or delivery driver, it may be mandatory, but it’s still best to check your local laws before recording anyone.

The Drive’s Gear section is our brand new baby we want to grow. To give you, our dear readers, clarity on the process, the products we get arrive from a variety of sources, including purchased ourselves or through manufacturers. No matter the source, we maintain our editorial independence and will always give you our honest assessment of any product we test. We cannot be bought. Unless you wave $1 billion in our faces. Maybe then we’ll consider it.

Let’s Talk, Comment Below To Talk With The Guides & Gear Editors!

We’re here to be expert guides in everything How-To and Product related. Use us, compliment us, yell at us. Comment below and let’s talk, y’all! You can also shout at us on Twitter or Instagram! You can also hit us up through email: guidesandgear@thedrive.com. 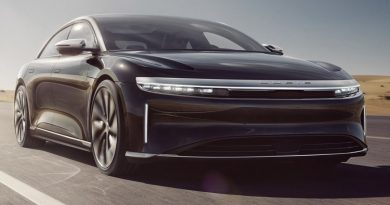 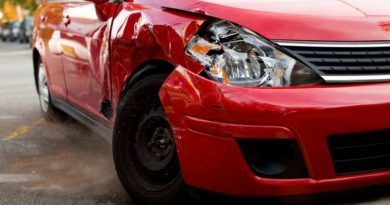 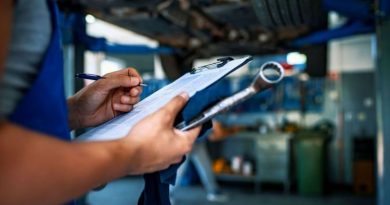 MOT fails SOAR with record rise for diesel drivers: Are you at risk of failing?