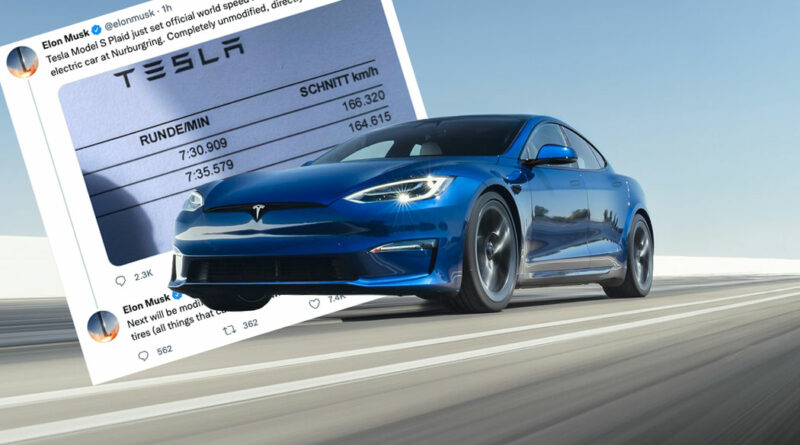 That 7:30:909 time, if true, would make the Model S Plaid, which uses Tesla’s new tri-motor powertrain good for 1,020 horsepower and 1,050 lb-ft of torque, 11.431 seconds quicker than the next-fastest EV to lap the Nürburgring, the 616-hp dual-motor Porsche Taycan Turbo. It’s worth mentioning that the more powerful 750-hp Taycan Turbo S has yet to be run around the famed racetrack. That’s probably a moot point, though—the 1,914-hp quad-motor Rimac Nevera is likely to be significantly quicker around the ‘Ring than them all.

While there’s a long list of internal combustion engine performance cars faster than the Model S Plaid around the ‘Ring, only two four-door vehicles are quicker than the Model S—the Jaguar XE SV Project 8 (7:23.164 in a Jaguar-conducted test), and the Mercedes-AMG GT 63 S 4Matic+ 4-Door (7:23.009 in a Mercedes-conducted but independently timed test).

One caveat: As Tesla has proven time and time again with the Model S Plaid, its best to approach its claims with a healthy dose of skepticism until they’ve been independently verified. Take the company’s stated 1.99-second 0-60 mph and 9.23-second quarter-mile times for the Plaid, which as it turns out require a sticky, prepared launch box used for drag racing to achieve. We tested the car both in this Tesla-approved manner and using our usual methodology—so, on an unprepped surface like that of pretty much any road in the world—and found the car to be slower in the truer-to-life scenario. Of course, slower is a relative term here, as it still managed a blistering 2.07-second 0-60 run and a quarter time of 9.34 seconds.

In the Twitter thread, Musk went on to say the next hurdle for the Plaid will be to run the famous track in modified form with additional aerodynamic pieces, carbon-ceramic brakes, and stickier tires, but also said that Tesla “didn’t have the bandwidth” to attempt such a run itself, instead deferring to “good third-party mod shops.” He also stated that an over-the-air software update with track-oriented settings and “waypoints and other things” for the Model S is “probably a few weeks away,” adding “I know, I know” in a reference to the company’s well-known failures to hit stated launch and released dates.

We’ve reached out to Tesla for its VBOX data and footage of the Nürburgring run and will update if we hear back from the automaker. 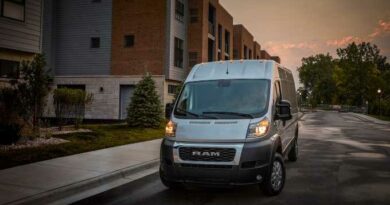 2022 Ram ProMaster First Look: Better Inside, Not Out 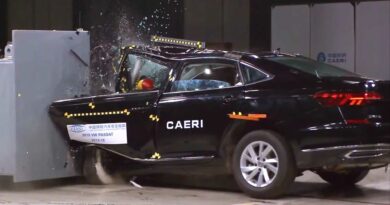