The Citroen Skate is a self-driving EV platform, onto which can be attached a range of pods suitable for transporting people, goods and services around a city

Citroen has teamed up with the hotel chain Accor and the technology company JCDecaux to create a new future-gazing concept, which hopes to change the way we move around a city.

Over the course of several long lunch meetings, the three French firms came up with this – the Citroen Skate. It’s an autonomous EV platform, which has been designed to serve various purposes simply by changing the pod on top.

That means the same platform could transport passengers around the city in the morning, with a specially designed windowed pod, before running a shipment of goods to a local shop in the afternoon by swapping to a sealed cargo-carrying pod.

The designers say this approach could be the breakthrough which makes autonomous driving technology profitable. Rather than fitting the tech to conventional passenger cars, which the firms say spend 95 percent of their time stationary, the Skate can be made to work all the time across a variety of transport sectors, helping to quickly offset the cost of development.

To dive deeper into this productivity well, Citroen and its partners also designed a series of mobile services that use the Skate as a base. These will help keep the platforms occupied and generate more income. One such idea is a fitness pod which allows the occupants to exercise as they’re transported around the city.

The fitness platform features a rower on one side of the vehicle and an exercise bike on the other – and Citroen says the idea could make commuting more efficient for its passengers, as the journey into the office will serve a dual purpose.

JCDecaux also stepped forward with a design that takes inspiration from its various street furniture dotted around the world’s cities. It’s called the City Provider, and can transport up to five passengers in an airy open box, complete with USB sockets, two interactive screens and planted roof.

The Citroen Skate occupies a similar footprint to the Smart EQ ForTwo city car, but it’s only 51cm tall without a pod on top. The pods expand the vehicle’s footprint to that of a conventional supermini car, albeit with heights of up to 2.5 metres for the passenger-carrying models.

The pods are mounted on moveable hydraulic cushions, to ensure the passengers don’t feel every pothole and jolt in the road – and they can be swapped over in less than 10 seconds.

The Skate has a top speed of 25km/h (around 15mph) and features an inductive charging system – meaning that it can simply park itself over a charging pad to top up the battery, without the need for human assistance.

The Skate moves around on unusual omnidirectional wheels, designed by Goodyear, which work a bit like the rubber trackball in an old-school mouse. Each wheel has a small electric motor inside, which allows complete 360-degree freedom of movement. So, the Skate can crab-walk and rotate on the spot, which Citroen says will allow it to thread itself through even the tightest city streets.

As the front and rear of the vehicle are completely identical (as the Skate’s unique chassis setup means it doesn’t have a dedicated direction of travel), the EV’s Citroen badges come with two backlight settings. Whichever one faces forwards shines white, while the one at the rear is backlit in red, so other road users can recognise which way the vehicle is travelling. 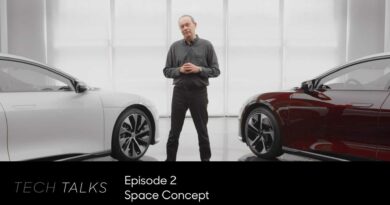 Lucid Air Is Very Roomy Inside For Its Size, Here’s How They Did It 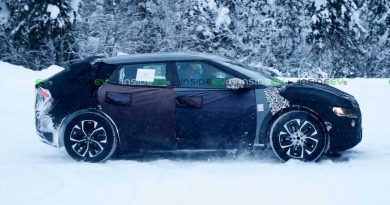 Will Genesis GV60 Electric Crossover Make Its Debut This June? 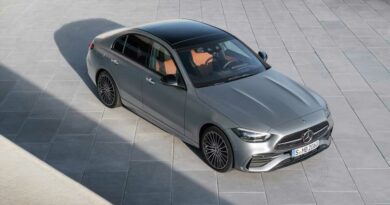 2022 Mercedes-Benz C-Class Sedan Pricing: You Get More, You Pay More