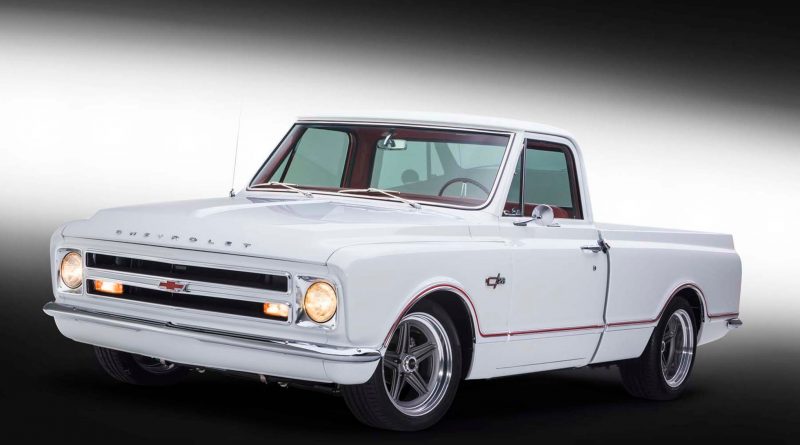 Chip Foose is a truck guy. His first car was a 1956 Ford F-100 Big-Window that he still owns to this day. We used to see Chip’s root beer brown 1956 F-100 parked in front of his office back in the early ’90s when he was a designer for Hot Rods by Boyd. Chip was fresh out of the Art Center College of Design in Pasadena and his office walls were covered with concept illustrations that included a few Harley-Davidsons rebodied as a two-wheeled 1957 Chevy Bel Air, a 1963 Corvette Sting Ray, and maybe even an early Ford Mustang.

That was when Boyd’s shop was a maze of industrial units collected one-by-one leading to the original free-standing building at 8400 Monroe in Stanton, California. It was something to see; the cement walls of neighboring tilt-up industrial units were concrete sawed open to mount steel man doors to provide a quicker route to the other sites on Monroe. At the back building in the row of units owned by custom painter Dick Vale there still might be the Oscar of CadZZilla on the wall. An Oscar is a full-scale illustration of a concept car being built into reality. Fans of the TV show Overhaulin’ will recollect the episode where Chip’s 1956 F-100 got the full Overhaulin’ treatment and came out of surgery with a passel of body mods and a glossy coating of Raven Black urethane.

In 2007 Chip was commissioned by the Ford Motor Company to lend some of his magic and design his vision of what a Ford F-150 FX2 Sport pickup should look like. The truck came out as the 2008 Foose F-150 and Chip got serial no. 1. Folks who have visited Foose Design at lunchtime when the shop is open to host tourists might recollect seeing Chip’s Foose F-150 parked in the driveway in front of the chain link fence surrounding the shop complex. 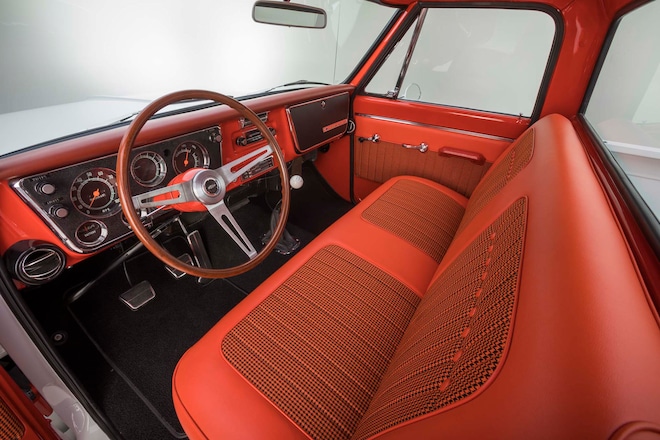 One day Street Rodder showed up to check out an ongoing project Chip was building for Wes Rydell and in place of Chip’s Foose F-150 he’d been driving for some years was a brand-new platinum silver Ford F-150 pickup. Chip had traded his Foose F-150 serial no. 1 in for a new truck. We’re not sure who influenced who, Chip and MotorTrend TV’s Wheeler Dealer Mike Brewer are good friends. The wheeling and dealing already started and it wasn’t long after that we saw Chip had traded the silver F-150 straight across for a really cherry 1967 Chevy C10 shortbed. That was when we met up with Chip at the bimonthly Sunday morning Enderle Center Show in Tustin, California. We spoke with Chip about the C10 a little bit and then he fired up the white Chevy and drove away. A Washington state resident ordered the 1967 C10 new.

It didn’t seem like more than a few weeks later we were at Chip’s shop covering for Street Rodder and the white 1967 C10 was blown apart into a million pieces. Chip explained the 327-inch V-8 the truck came with blew up. It just so happened Chip had a complete 1967 Camaro Z/28 engine in his inventory and a concept to build what the truck could have looked like if a COPO Z/28 pickup was an option.

Incredibly, the date-coded casting numbers on the 302-inch Z/28 engine indicate both blocks the 327 and the 302 left the foundry stamped only a few numbers apart. It makes sense without verifying facts we recollect the Z/28 302 engine was a 327 block with a 283 two-main crank. The 1967 Z/28 engine in Chip’s truck was blueprinted to factory stock specs by Bostick Racing Engines. As all early 302s the camshaft is a Corvette 30/30 and the heads are camelback Corvette as well. The exhaust system starts with a pair of Corvette 2.5-inch cast-iron ram horns and is silenced with a pair of MagnaFlow stainless steel mufflers. Carburetion is an OE 780-cfm Holley and the distributor a stock Z/28 Delco converted from points to PerTronix electronic ignition. The high-winding 302 reached 405 hp on the dyno. 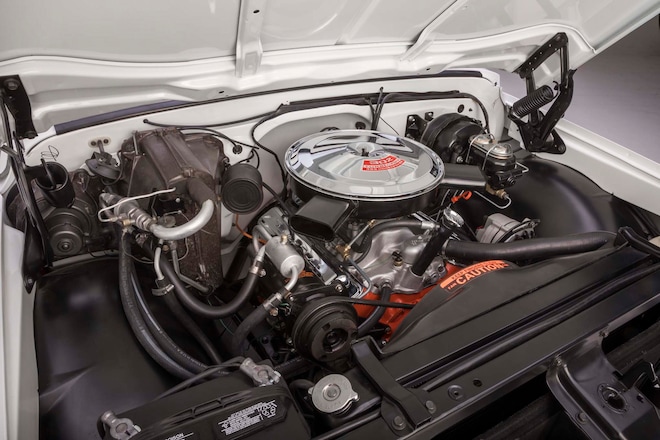 The transmission is a Bowler TREMEC five-speed with a Centerforce clutch and shifted with a Hurst arm. A Powertrain Industries driveshaft connects the trans to a 12-bolt Chevy rearend with 3.08 gears and Positraction. We made several visits to keep up with Chip’s progress and from start to finish the C/28 project took a swift five months to complete. During one visit the C10 chassis was a complete roller, Chip had painted the cab and other parts were in the paint booth drying.

A few weeks later Chip’s C/28 was completed and on its way to SEMA. Every detail Chip incorporated into the C/28 to emulate a factory build is exacting right down to issuing a SPID (service parts identification)—a listing of all the options equipped on a GM vehicle printed on a sticker inside the glovebox door. The handling package is a combination of Hotchkis sway bars and Classic Performance Products components with four Master Power Brakes discs paying tribute to the rare Camaro JL8 four-wheel disc brake option. 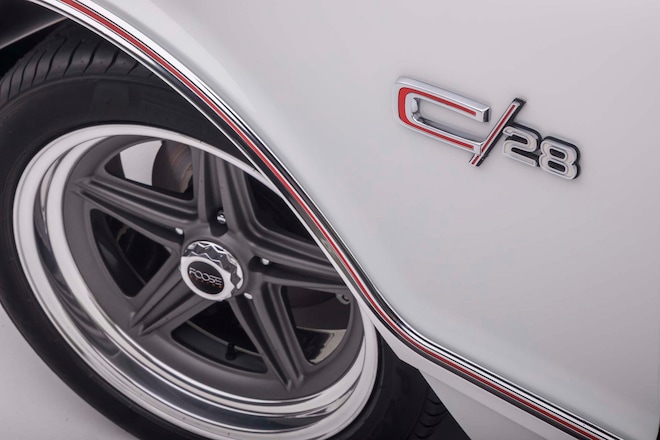 The factory original-style orange Hound’s-tooth cloth upholstery is a kit from The Truck Shop, custom upholstered by Alfredo Carcamo of Al’s Garage. Chip pointed out how he sprayed single-stage BASF paint over every original spot weld and mass production detail to replicate OE bodywork and paint. For the custom touches, or should we say included with the optional C/28 package, Chip pulled the grille back, lowered the turn-signals, and reworked 1967 Camaro bumpers to fit custom front and rear gravel pans.

It’s always interesting to swing by Foose Design to see what Chip and his craftsmen are working on. We asked Chip where the C/28 was, and ever the wheeler dealer Chip replied it was gone; he’s driving a new Ford F-150. It turned out a friend of Chip wanted the C/28 bad enough that he threw in two engines to sweeten the deal: an Offenhauser and a Duesenberg. The Duesy mill is headed under the hood of Chip’s latest coachbuilding adventure monikered the “Foosenberg,” a stretched 1932 Ford inspired by the Franklin Hershey–designed alloy-topped Murphy coupe. 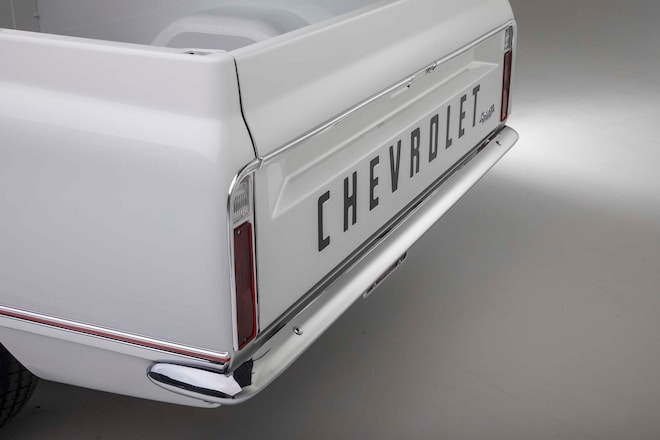 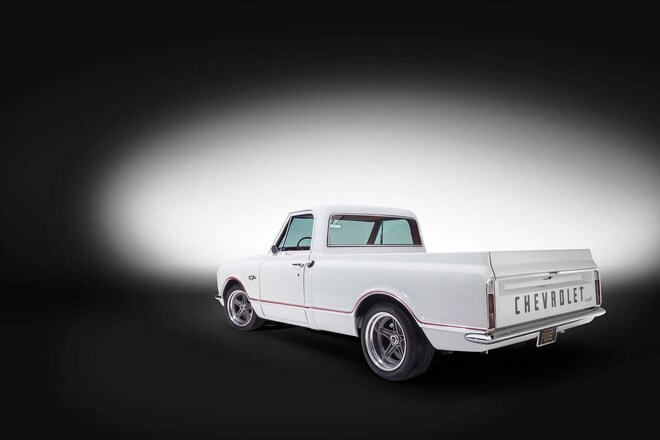 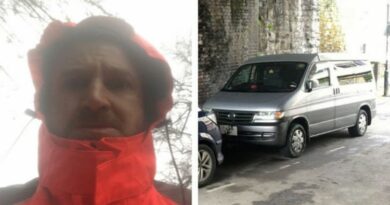 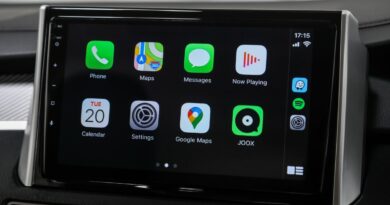 Is having Apple CarPlay or Android Auto important? – paultan.org 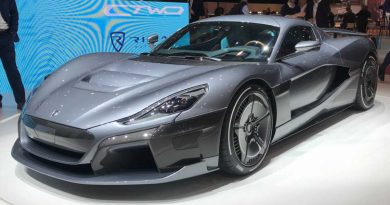