Home » Car Reviews » Bustin’ It: Meet the Cars and Stars of Motor Mythbusters 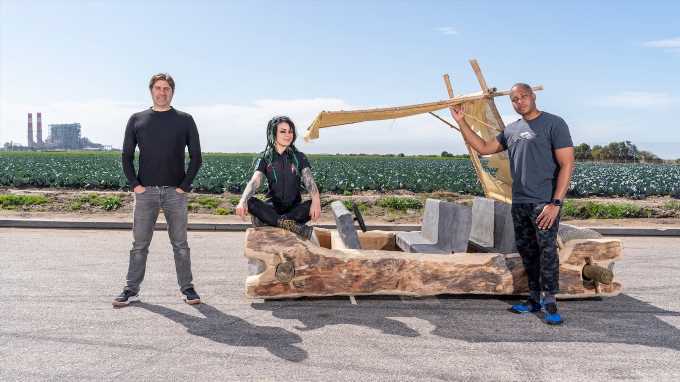 This is the best Honda CR-Z we’ve ever driven. We’re pretty sure it’s the best CR-Z anyone has ever driven. Goose the gas, and the unmuffled exhaust’s ear-splitting buzz is pierced by the jet-engine scream of the giant turbocharger that practically bursts out of the comically bulged hood. The instrument panel is awash in yellow warning lights, the car’s ECU dimly aware something is amiss with the hybrid system. It doesn’t know exactly what’s wrong, but we do: It’s been fooled into force-feeding extra juice to the CR-Z’s electric motor.

Downshift to second and drop the hammer—yeah, it’s a stick—and the “Hot Rod Hybrid” responds with a rush of air, fuel, electricity, noise, and acceleration, hunkering down on its lowered suspension and tearing through the corner. The CR-Z evokes village-idiot-sized grins—it’s fantastic! And better yet, it was created in the serious scientific pursuit of better fuel economy.

Who could have created such a marvelous monstrosity? To die-hard fans, the car’s duct-tape wrap is an instant giveaway: This Honda has MythBusters written all over it.

Cars and car-related myths were an integral part of the original MythBusters series, and the new Motor MythBusters show (you can start watching today, August 4, on the MotorTrend app) focuses exclusively on automotive-related myths.

“We’re looking at car stuff you’ve always wondered about but would never have the time or resources to actually test,” says host Tory Belleci, a veteran of the original MythBusters. “I’ve always loved cars, and on the original show, whenever we had experiments that involved precision driving, I was usually the person to do that, so of course I was on board.”

Belleci is joined by two new faces: Bisi Ezerioha, racer and founder of Bisimoto Engineering, and Faye Hadley, professional wrencher and co-host of MotorTrend’s All Girls Garage. “It’s fun to see their excitement, and I’m learning a ton from them about taking cars apart and putting them back together,” Belleci says.

Ezerioha was eager to participate in the new show.

“I have this wonderful knack where I can figure things out quite easily,” he says. “When it comes to Motor MythBusters, that’s the little thing I bring to the table.”

But he’s selling himself short: Ezerioha has a degree in chemical engineering (his parents wanted him to be a chemist so he could take over the family cosmetics business) and a track record of building insanely fast cars, including a 1,000-horsepower Honda Odyssey minivan, and numerous twin-turbo and all-electric Porsches. In his racing days, Ezerioha drew on his chemistry background and made fruit-scented gasoline, just to annoy his competitors.

Hadley was a bit more hesitant to participate.

“This was a totally different thing for me, way out of my comfort zone,” she says. “All Girls Garage is just basically doing what I already do. I’m not a fabricator. I don’t do a lot of custom stuff. I’m a mechanic; that’s what I do.”

But Hadley soon found her expertise was vital to the new show.

“When the producers were trying to figure out what was possible, they kept asking me, ‘Can this be done? Can that be done?'” she said. “They needed someone who had been through the experience of actually doing it. At first, I thought, ‘They’re all going to hate me because every time they come up with an idea, I’ll be like, no, this is not going to work.’ But we started working on the first day, and we all got along perfectly. It was like we’d known each other for a million years.”

“We’ve become great friends, just based on our experiences on this show,” Ezerioha adds. “When you go through these trials and tribulations together and problem-solve as one unit, you get pretty close. This is what I love about Motor MythBusters. As an engineer, you always think, ‘What if? Is it possible?’ This show allows us to test and see the results firsthand, results that are solid, and to be able to make concrete conclusions based on the evidence we gather. It’s amazing to be able to put these myths to the test scientifically. I wish I could do this show every day of my life.”

Working out of a new shop called the Carthedral, the three hosts will put some of motoring’s longest-lived legends to scientific test. Can you increase the boost of a turbocharged engine using a soda can tab? Do birds prefer to poop on red cars? If your car overheats, can you really replenish the radiator using, er, available bodily fluids? And can you improve a hybrid’s fuel economy by turbocharging it? Motor MythBusters aims to answer these pressing questions, and many more.

But although Belleci is steeped in MythBusters history, the show required a shift in thinking for his co-hosts.

“I went to engineering school,” Ezerioha says. “I focus on the data. I’m all about the technology. Faye is an amazing mechanic. When it comes to diagnosis and repairs, she is spectacular. And then we have Tory, who loves blowing things up. At first I was, like, ‘Why would you do that? We spend so much time building things, and you want to blow them up!’ But now I’ve started to enjoy it. He’s a perfectly bad influence on me.”

Belleci, however, is quick to address the original show’s appetite for destruction.

“If you know MythBusters, we do a lot of builds, but then we also do a lot of hard tests where things break and explode and get destroyed,” he says. “In Motor MythBusters, we’re trying to find the balance of building cars and testing them in a way that we don’t completely destroy them. Every time I post a photo of a car from this series, everyone is like, ‘Oh, no, don’t blow it up!’ They just assume we’re going to drive everything off a cliff or trash it.

“Some of these are classic cars we don’t want to wreck just for the sake of wrecking,” he continues. “Some cars are junkers we tore apart and rebuilt to be way cooler than they ever would have been in their previous lives. We’re taking the vehicles very seriously. They are precious, and we try to pay respect to them. We’re doing a lot of weird builds and a lot of testing and finding things that people can easily do to their own vehicles to make them cooler and faster.”

The Hot Rod Hybrid we’ve just driven is a great example of the Motor MythBusters approach.

“The myth itself was that if you added a turbocharger to a hybrid, it would be even more fuel efficient,” Belleci says. “We took the stock hybrid on two courses, one flat and one in the mountains, and measured how much fuel we consumed. Then we brought it back to the shop, made our modifications, and drove those same courses again.”

Of course, nothing is ever quite so simple when left to the Motor MythBusters crew, and this was where Ezerioha’s engineering background came to the forefront. Along with turbocharging the engine, he came up with a way to boost the hybrid system’s output, as well.

“Bisi’s a genius,” Belleci says, and Hadley agrees: “He is so freaking smart.”

But because this is Motor MythBusters, merely making the car more powerful wasn’t enough.

“We called in Gene Winfield, the famous car customizer,” Belleci says. “He’s designed and built some of the coolest cars in television and movies. He’s a legend of hot-rod building, and he gave us some pointers: Change the bumpers, change the fenders, paint it with flat gray primer and make it look all Mad Max-like. I said, ‘Why don’t we just cover it with duct tape?’ We followed the lines of the car with the tape, and it just looked so ridiculous and MythBusters-esque. I mean, who soups up a hybrid?”

The car that resulted is perfectly bonkers, in the sense that it’s as bonkers as it is perfect. It’s quick, it’s noisy, and it’s way the hell more fun than it ought to be.

Does it work, or was it totally busted? Like you, we’ll have to wait until the show airs to find out.

The Cars of Motor MythBusters

Can you really increase a car’s turbo boost with a soda can tab, the way Vin Diesel’s Dominic Toretto character did in The Fate of the Furious? Motor MythBusters took a 1973 Chevrolet Monte Carlo, stripped it down for lighter weight just like in the movie, and added a turbo to its classic 350-cid V-8. Were the hosts able to successfully replicate the soda tab device? Let’s just say the Motor MythBusters crew built a better mousetrap.

Does chopping a car increase its top speed by improving its aerodynamics? Motor MythBusters started with the least aerodynamic vehicle the crew could find, a 1973 Dodge Tradesman van, and chopped its top—an operation that was surprisingly more difficult and required way more skill than the hosts imagined. Once again, they wouldn’t tell us the results, but Ezerioha gave us a hint: “I’m starting to think I should chop every car I build.”

Can a human being really drive a car with a wooden chassis and stone wheels? The Motor MythBusters team created an actual Flintstones car, complete with a set of “Fred feet” to make it go. “Tory came from a lumberyard with two large logs,” Ezerioha says. “We whittled them down by hand. I’ve never wielded an ax before. Never had the opportunity to play with a chain saw. I never had to do that in engineering school.” 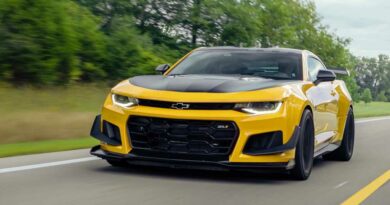 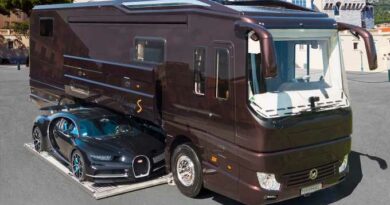 Peek-a-Bugatti! What’s in the Belly of This Motorhome? 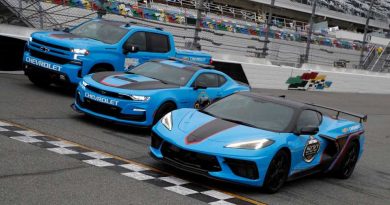