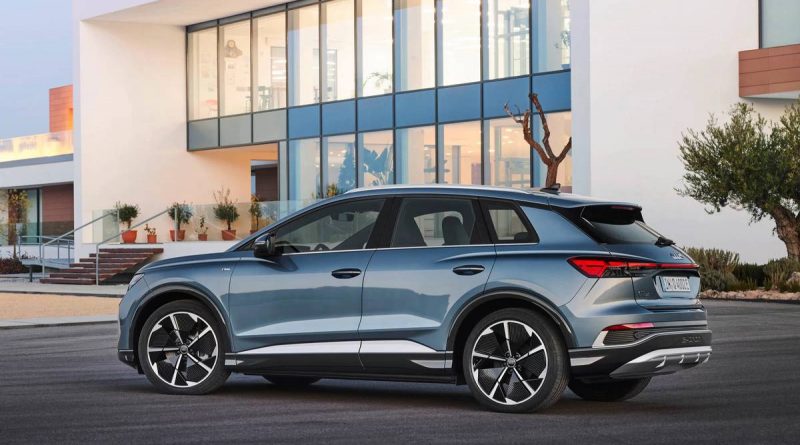 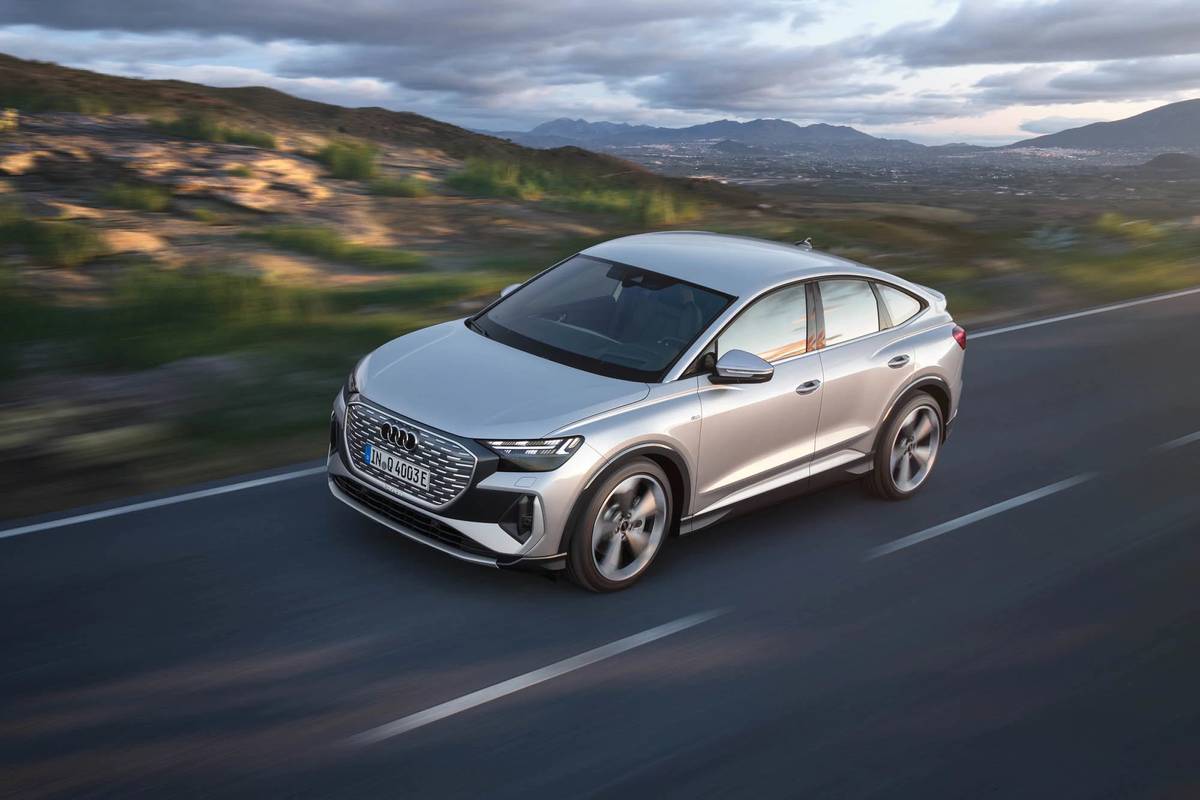 The list of electric vehicles available from major automakers planning to challenge the dominance of Tesla is about to grow by two models, as Audi has taken the wraps off its 2022 Q4 E-Tron and Q4 E-Tron Sportback models. They mark the lowest-price, entry-level, electric-vehicle crossovers from the German luxury brand, riding on a dedicated EV platform and offering an estimated maximum of 250 miles of range, according to the manufacturer.

Size-wise, the new Q4 E-Tron and Q4 E-Tron Sportback are dimensionally similar to Audi’s compact Q5 crossover, so smaller than Audi’s other EV SUV, the original E-Tron. The company says that the footprint is the same as the Q5, but that the Q4 E-Tron brings the next generation of EV styling to the Audi lineup, albeit in the smallest entry-level model available for sale. The standard Q4 E-Tron will be an SUV, while the Sportback model gets the “crossover coupe” treatment with a lower, racier roofline and truncated cargo area that ends in a two-part window and deep, integrated spoiler. Both models put a special emphasis on aerodynamics, with the Q4 E-Tron achieving a 0.28 coefficient of drag, while the Sportback manages an even better 0.26. Both models will be offered with all of Audi’s signature styling elements, like the S Line and Black Optic exterior styling options and the animated coming-home and leaving-home dancing head- and taillight patterns. New to the system: The driver can choose between four different running-light signatures via the onboard multimedia system.

On the inside, it’s an expected move to a “glass cockpit” for the Q4 models, including an optional flat top-and-bottom steering wheel with touch-sensitive controls and capacitive hands-on detection for semi-autonomous driving aids. Audi claims that the interior is roughly the same size as the Q5, but the Q4 E-Tron features better passenger space due to the elimination of the transmission tunnel and improved legroom thanks to a flat cabin floor. The center 10.1-inch multimedia interface (Audi MMI) display is angled toward the driver and features a floating panel below it that houses the electronic shifter above an additional storage cubby. The gauge cluster is a standard 10.25-inch digital affair; it can be upgraded to Audi’s signature Virtual Cockpit look for additional functionality, such as full-screen navigation. An optional augmented reality head-up display is available, superimposing information like driver assistance features, speed and navigation aids onto the windshield but appearing to be projected roughly 30 feet in front of the driver and interacting with outside elements like lane lines and other vehicles. A new Sonos premium audio system will be available, marking that brand’s debut with the German automaker. 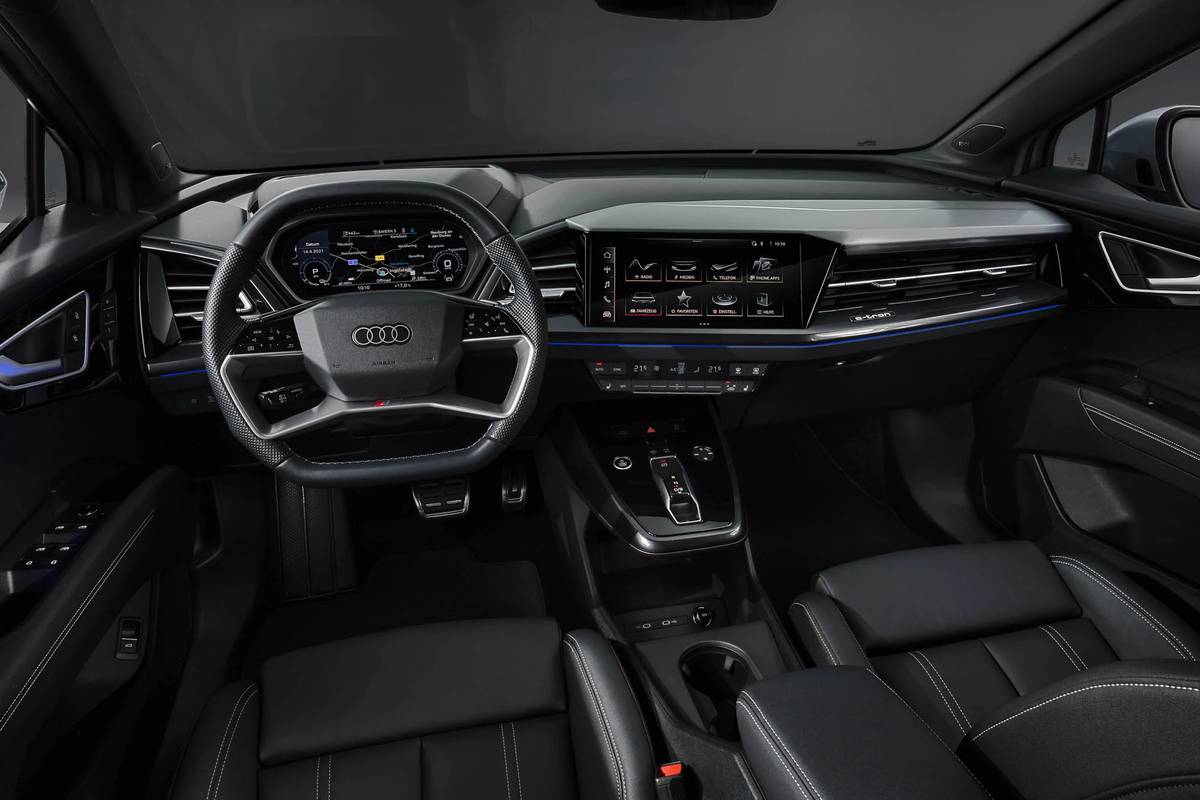 The new Q4 E-Tron and Q4 E-Tron Sportback are powered by a common battery system, an 82-kilowatt-hour gross rating, meaning the full size of the battery and 77-kwh net, which is the usable portion of the battery for driving the car. It’s a liquid-cooled lithium-ion pack that sits in the floor between the axles to lower the vehicle’s center of gravity. The crossover can be had in one of two configurations: The Q4 40 E-Tron is a single-motor, rear-wheel-drive model that makes an estimated 201 hp, while the Q4 50 E-Tron quattro and Q4 50 Sportback E-Tron quattro are dual-motor all-wheel-drive models, adding a motor to the front axle and bumping output to an estimated 295 hp. Recharging can be done via an up to 11-kilowatt AC circuit or up to 125 kilowatts on a DC fast charger.

Handling and driving performance are managed by the McPherson front axle and five-link rear suspension setups, as well as the Audi drive mode selection system that allows varying driving profiles like Efficiency, Comfort, Dynamic and customizable Individual. The range champ will be the Q4 40, which Audi estimates will achieve roughly 250 miles in the U.S. EPA cycle; range estimates or recharging times for the rest of the lineup are not yet available.

A full complement of driver assist and semi-autonomous driving aids will also be available, including Audi Pre-sense, side and lane assist, and high-beam headlight assist. Adaptive cruise control will be offered with lane keeping and Traffic Jam Assist.

The ’22 Audi Q4 E-Tron and Q4 Sportback E-Tron will arrive in U.S. dealerships toward the end of 2021, according to the company, with the least expensive model expected to start under $45,000 (not including destination fee or any available tax credits or rebates) for a Q4 40 E-Tron. The company hopes it will also qualify for a $7,500 federal tax credit as well as other local incentives depending on geographic region. Other pricing and additional specs will be made available closer to the vehicle’s on-sale date. 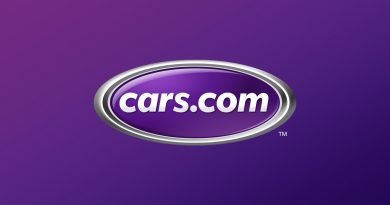 2019 Subaru Crosstrek Hybrid: 8 Things We Like and 5 Things We Don’t 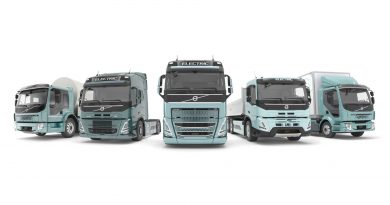 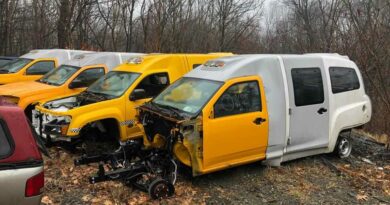