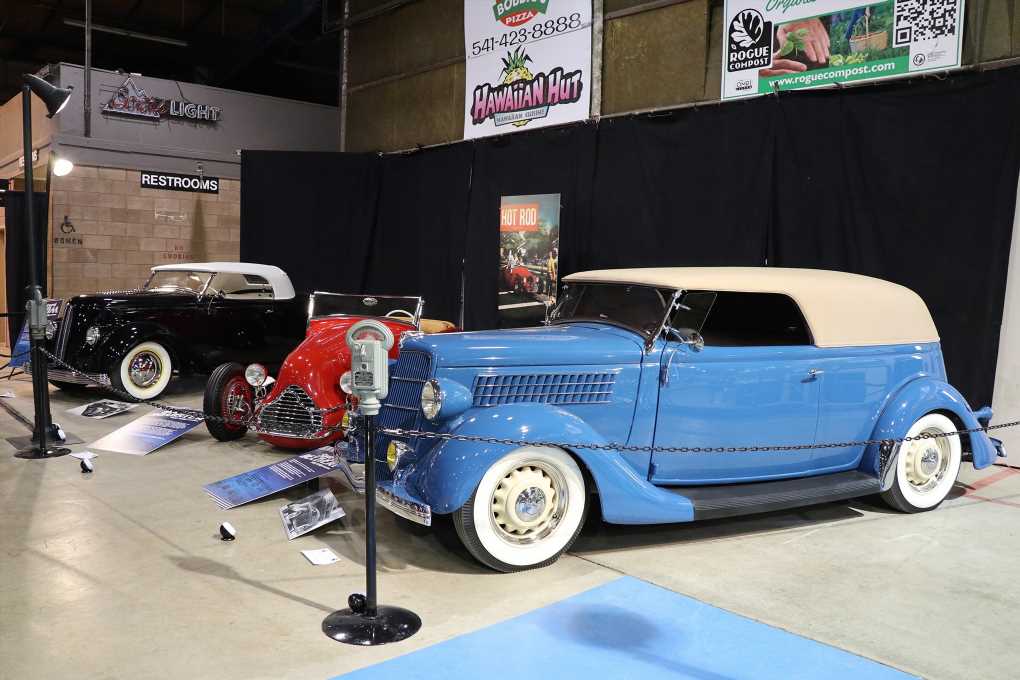 There are only eight more years until the Medford Rod & Custom Show presented by O’Reilly Auto Parts will celebrate its 50th birthday, and that’s wonderful. It’s wonderful because the indoor show has been making contributions to support the local community since its earliest days and bringing together a lot of great custom cars and fine folks in the process. The show was founded in 1977 by Rogue Valley Street Rods and then in 2015 local car guy and now show promotor Rich Wilson was entrusted to carry on the tradition. 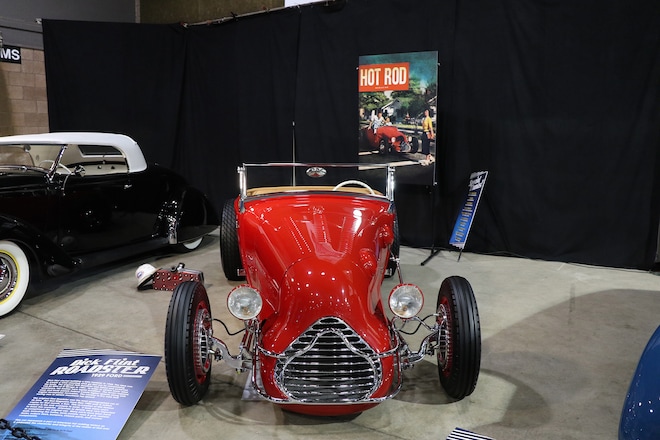 Every custom car show has its own unique personality that sets it apart from other shows. For the Medford Rod & Custom show it’s the great hospitality that begins upon checking in at the Rouge Regency Inn and continues all weekend at the show with a VIP lounge for car owners and show sponsors. There’s no other custom car show where a participant can find a room full of La-Z-Boy recliners, foot stools, and couches, plus chow down on a complimentary breakfast, lunch, and dinner buffet every day of the show.

OK enough about leisurely recuperation and scarfing down food, let’s talk about what goes on at the show. The 42nd annual wasn’t the first time STREET RODDER was at the Medford Rod & Custom show but it was the first time doing a Top 10 pick for the Painless Performance Products/STREET RODDER Top 100 program. At the conclusion of the show 10 Medford cars were presented Meguiar’s products and are now eligible to compete for STREET RODDER’s Street Rod of the Year award, plus earn a spot competing in the Painless Performance Products Triple Crown of Rodding held at Dollywood’s Splash Country during the Shades of the Past Hot Rod Roundup. 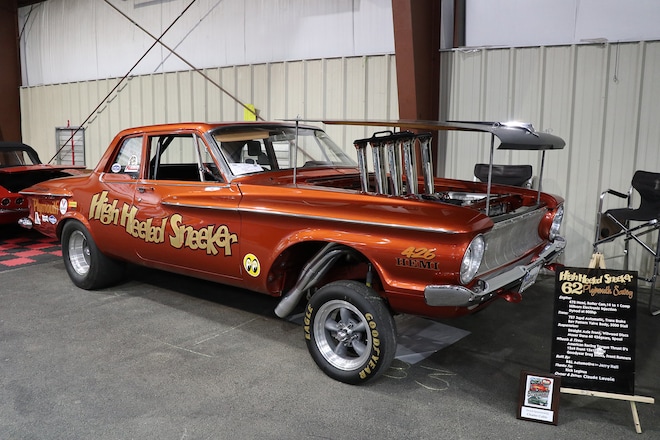 A scheduling change by the venue landed the 2019 Medford Rod & Custom Show to take place Easter weekend but that didn’t stop folks from supporting the Easter Sunday auction to help local charities. The Brush Bash, put on by the area’s pinstripers, donated to the cause. Tony Chavez of King Hat Pinstriping said, “We have participated in the Medford Rod & Custom Show for the last four years and always have a swell group of pinstripers donating their time and skills to raise money for some great charities. For 2019 we had me, Rick Evans, Don Tippet, John and Scott Matthews, and Don Fite. We’re all friends and have a great time creating art and throwing our skills together to make art that we auction off at the show, donating all proceeds to some great charities shared between Eagle Point High School’s SkillsUSA program, Familia Unida Youth Program, and the Love Abounds foundation.”

Special thanks to Wheeler Dealers Mike Brewer and Ant Anstead for Pedigo Electric Bikes donating Mike and Ant’s personal bikes to benefit Dutch Bros Love Abounds Foundation. And an extra special thanks to Mike and Ant for joining us via Facetime for a STREET RODDER Facebook Live on Easter Sunday to wish everyone a Happy Easter. The Medford Rod & Custom Show is a wonderfully atmospheric event and will host the Painless Performance Products/STREET RODDER Top 10 pick again in 2020 at the 43rd Annual Medford Rod & Custom Show.

Voltage Drop
Voltage drop is common in vehicles when too small of gauge wire is used to power accessories. Bad connections can also cause voltage drop as well as a switch that isn’t designed to carry enough amperage for an accessory. Check the output of the alternator and compare it to your voltmeter. They should be within a tenth of a volt for best performance. 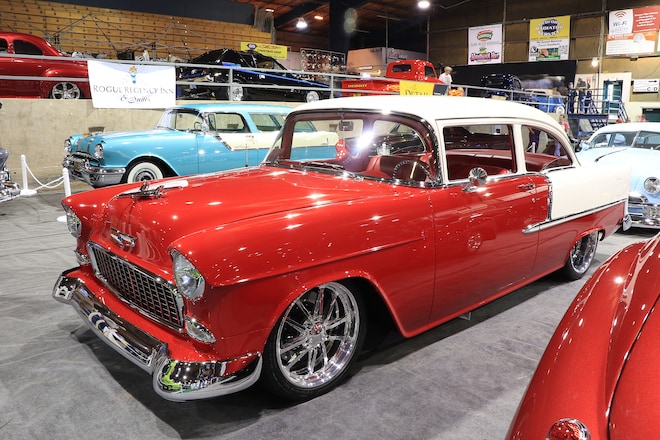 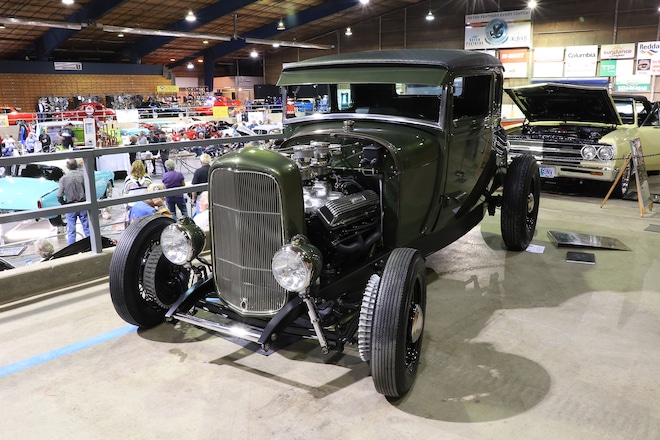 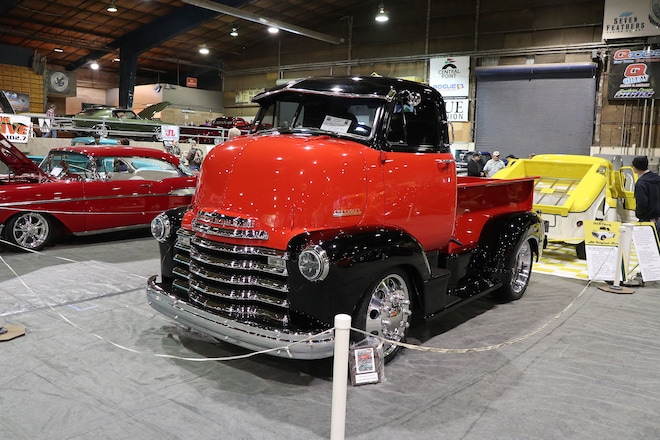 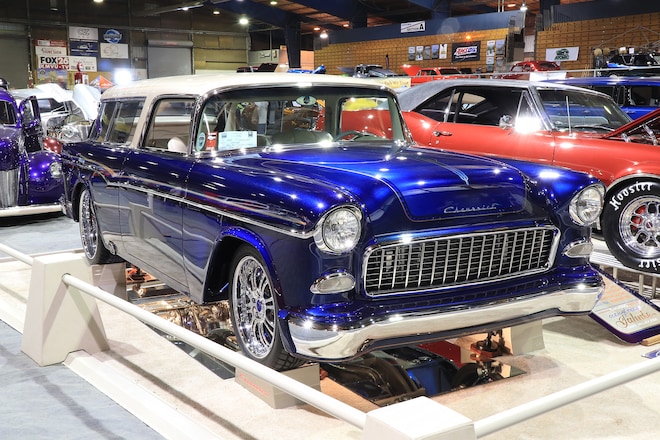 1955 Chevy Nomad | Glen Jahnke | Gold Hill, OR
Glen’s 1955 Nomad wagon was metalworked and custom painted by Tommy Carr’s Customs & Rods in PPG and House of Kolor paint. The over-the-top wild custom interior is by Randy Kipp’s Showtime. Inglese eight-stack injection tops a 383/TREMEC five-speed. For suspension, a Heidts IFS and Kugel IRS, along with 18- and 20-inch Asanti wheels on round tires. Inside details include Vintage Air A/C and Classic Instruments instrumentation. Tennessee-bound, Glen’s 1955 Nomad will compete for the Triple Crown of Rodding. 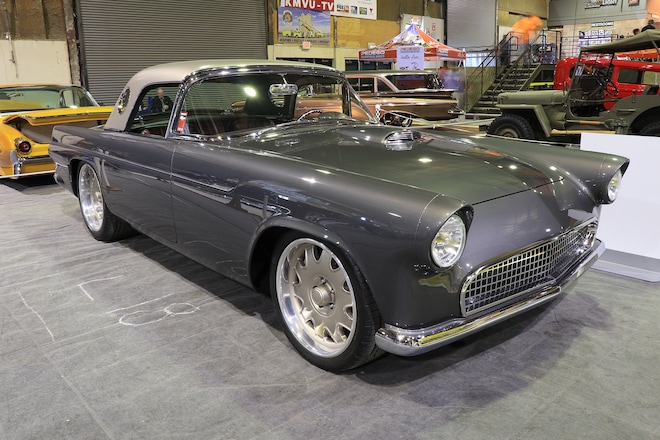 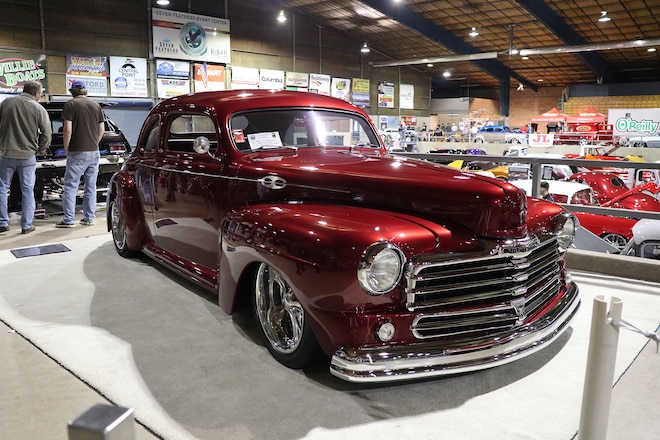 1948 Mercury Monarch | Ron Hulse | Eugene, OR
Ron Hulse of Classic Rod & Custom in Eugene, OR, made 80 modifications to his PPG Candy Red Pearl 1948 Canadian Mercury, but it would take a trained eye to spot them all. A mild top chop and major changes to the front bumper and grille include 1955 Buick headlight bezels with equal mods to the rear. Underhood is a big-block 454 Chevy backed with a 4L80E trans. Bespoke Classic Instruments “Big Ol’ Gauge” rests in a narrowed shoebox Ford dash. Goodyear tires on Foose wheels and Vintage Air A/C. 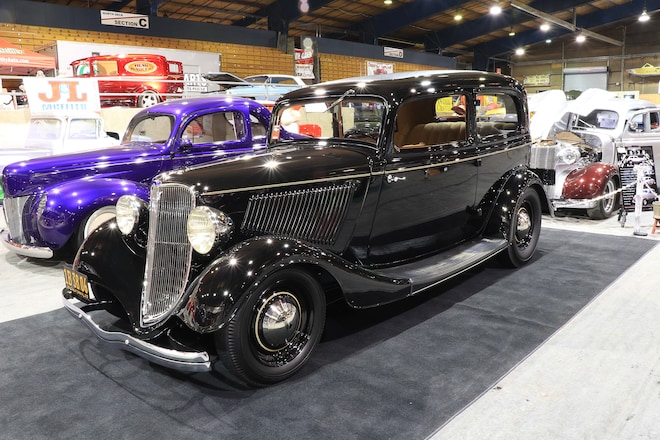 1933 Ford Tudor | Joe Buresh | Granite Bay, CA
The PPG black paint on Joe’s 1933 Ford is 18 years old, but a lot of updates have been added to the “old-timey” Tudor since. Vintage Air underdash air conditioning, Classic Instruments, and a TREMEC five-speed, to name three. In front, a 327 Chevy with 3x2s and a Winters differential to bring up the rear. In front a Super Bell axle with additional Pete and Jakes suspension goodies, including Aldan American coilover shocks. For rolling stock, Coker Firestones on Wheel Vintiques steelies. 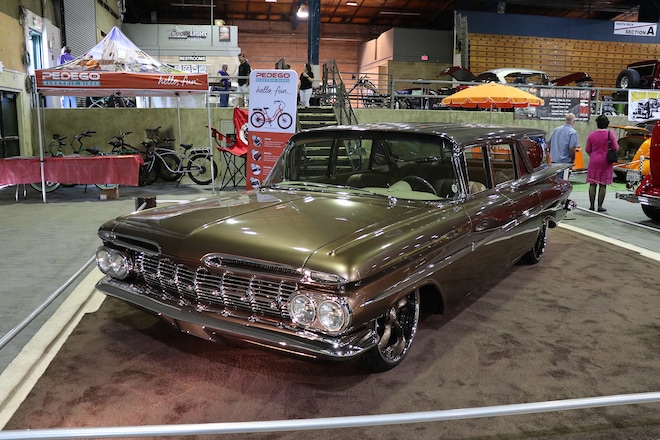 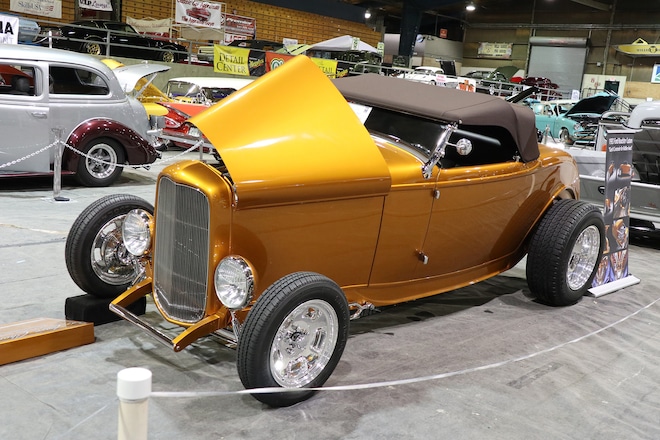 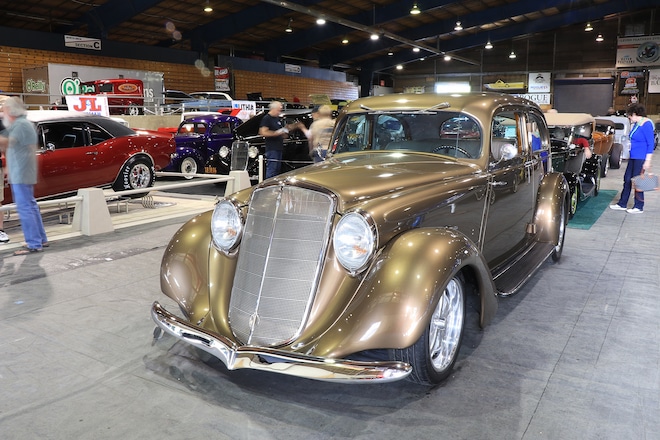 The Great Northwest has a lot of great customized cars, street rods, and hot rods, so it wasn’t an easy task to narrow down the field to one when it came time to pick the Ford Performance Parts/STREET RODDER Best Ford in a Ford Award at the 2019 Medford Rod & Custom Show Presented by O’Reilly Auto Parts. After searching the entire show, we wandered back and forth between a bright red 1932 Ford Tudor with a Weber carbureted small-block Ford with Cobra valve covers and Mark Daley’s 1950 Ford Custom DeLuxe two-door sedan.

Originally the 1950 was built in California, transplanted to Arizona, and then sold to a guy in Houston, Texas, who owned it six years before he sold it to Mark. The Texan was pretty up front about the 1950 needing a little love to bring it back to snuff. Mark added the three-carb setup to the 302 Ford engine and gave the 1950 a major mechanical service and detailing. When it’s not in the occasional custom car show Mark’s shoebox Ford spends most of its time as a daily driver, or should we have said Daley’s driver? OK no more corny jokes … well, maybe one more. Getting down to the lowered stance of the 1950 shoebox is thanks to Shorty’s Lowrider Shop in Houston laying it down on RideTech air suspension with a bridge-notched frame in the rear and Fatman Fabrication drop spindles up front. The tires are wide white radials mounted on 15-inch steel wheels with Cadillac hubcaps.

Under the hood of Mark’s pearlescent baby blue 1950 is a 302 Ford with a mild cam and a trio of Autolite two-barrel carbs. The transmission is the forever dependable Ford C4 three-speed automatic coupled to a 9-inch Ford rearend. For chilled comfort and hi-res sound riding in the bone white tuck ’n’ roll interior there’s Vintage Air A/C and a Sony Xplod sound system. The custom body modifications are a 3-inch top chop frenched headlights and antenna.

Mark is a custom bike builder by profession and operates ThunderStruck Custom Bikes in the scenic green hills of Medford, Oregon. 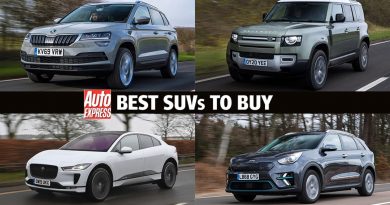 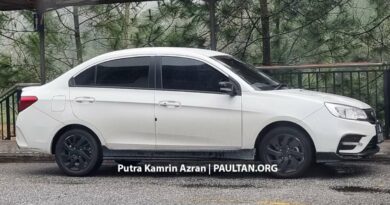 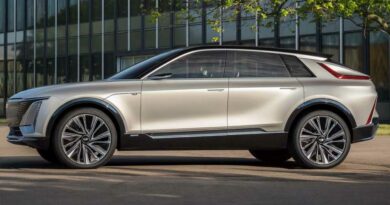