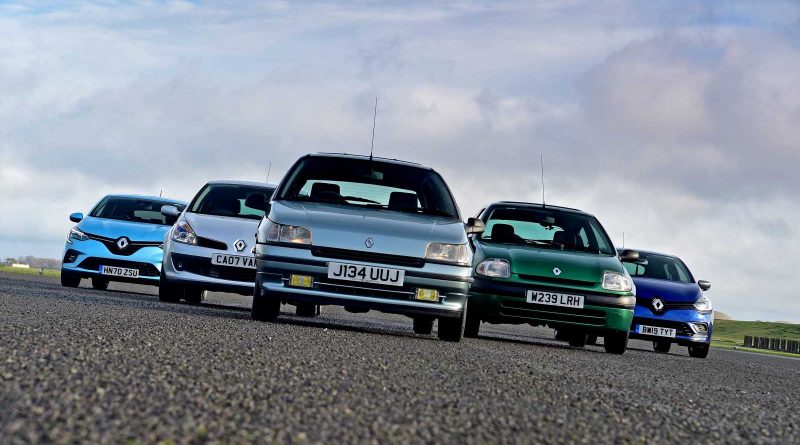 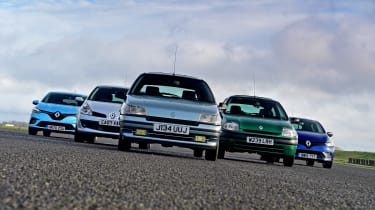 This year the Renault Clio celebrated its landmark 30th birthday. At the same time the iconic French supermini claimed the accolade of being Europe’s best-seller; over the past three decades, Renault has shifted more than 15 million examples of its supermini.

The chances are you’ve come into contact with a Clio. From children being taken to school in friends’ cars, who have grown up and potentially learned to drive in a Clio, to small families that can now use one as an everyday car thanks to its growth in practicality and versatility, it’s been ever present over the past 30 years. It’s claimed numerous awards and captured the hearts of thousands of enthusiasts, as we’ll find out.

The Clio story started in 1990, with the MkI’s Paris Motor Show launch. By modernising the formula it got so right with the 5, Renault had high hopes for its new supermini. This model aimed to transform the sector with big-car refinement and compact, supermini dimensions.

Features such as electric front windows and remote central locking might sound comical today, but 30 years ago such kit was reserved for bigger, more costly cars – and while this level of equipment was only on the top-spec 1.4-litre RT, it cost just £8,980. Today, that works out at £20,500, showing that a hi-spec Clio remains relatively good value given the car’s kit and engineering.

Renault Clio I and II 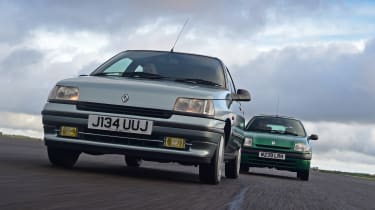 Renault got its small-hatch recipe just right at launch, setting the pace for years to come

MkI Comparing the original Clio with the current car on our special photoshoot, the jump seems like light years – and it is. But viewed as a logical progression with all five generations of Clio lined up, you can see how the model has evolved. The original – an automatic, no less – still feels roomy inside, especially when viewed in context of the times in which it was released. True, the engine drums away in front of you, yet the automatic box’s take-up is swift and responsive, even if it hangs on to gears a little too long before labouring its changes.

But we’re viewing this through contemporary eyes; at its 1990 launch the Clio was advanced, and the way it rides, steers and handles – even the straight and true way in which it brakes from motorway speeds – shows that it was very much a modern car when it came to the engineering that underpinned it.

And even if the interior plastics are so hard you could perform a drum solo on them – and we’re sure decades of punishment from UV light hasn’t helped their tactility, either – the cabin is packed with delightfully retro charm. 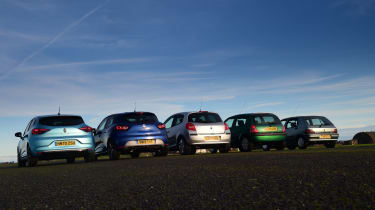 At the time, genuine ability and talent saw the original Clio secure the 1991 European Car of the Year title. However, while in isolation there are some features that would put a Ford Fiesta from the same era to shame, moving forward in time to the Clio MkII feels like a big step.

MkII This model arrived in 1998, even though development started only a year after the original Clio went on sale. Such a long R&D period really shows, because the second version feels a huge leap on from its predecessor. Just look at it. The curvier shape and subtly stepped, rounded tailgate that reflects the rest of the car’s more bubble-like look are a big departure from the angular Clio that came before it.

There’s extra space inside, too. The centre stack hasa then state-of-the-art LCD screen, and the dash is more modern. It feels like more thought went into the design – and additional effort definitely went into the engineering, because the MkII is more refined, smoother and more mature. A wiper cam that ensures a full sweep of screens on right-hand-drive cars is a small but significant example.

Naturally, this trait runs through every successive generation of Clio, as we’ll see. However, it’s clear this is where the model became modern in the conventional sense – which was best highlighted by a very special car.

While the original Clio did have a hot version, called the Williams (after the Formula One team that Renault engines powered at the time, although Williams had no involvement in tuning the car), the MkII Renaultsport 172, 182 and limited-run Trophy all showed that a hot hatch could still rival a supercar for B-road thrills. They cemented the French maker’s reputation for building iconic hot hatchbacks. Of course, there was the madcap mid-engined Clio V6 as well, in both phase 1 and phase 2 guises. Another limited-run model, it was a massive draw for enthusiasts, but a tricky car to drive quickly. 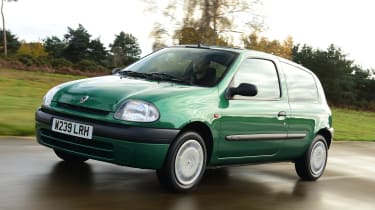 With all these souped-up versions, though, it was the second-generation Clio that made hot-hatch fans take note. And the need to bake those credentials into the product meant even the regular models drove sweetly, with the sophistication that gave the performance also responsible for improvements in comfort and refinement.

Efficiency and safety were boosted, too, at a time when these factors were becoming increasingly important to consumers. In fact, the MkII was up to 15 per cent more efficient than the MkI, while ABS was standard on 50 per cent of the range, or available as an option. The fact that you could get up to four airbags made the Clio a great choice for families. In fact, its popularity was proven in 2002, when Renault sold a record number of Clios in the UK, with 86,337 examples finding homes.

You can still feel that modernity, with power steering – an easily overlooked factor – quieter engines and more agility without sacrificing (relative) cabin calm. 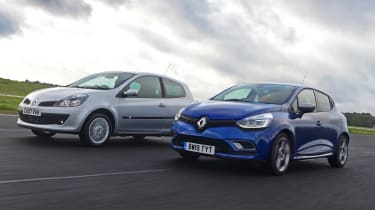 MkIII Moving on to the third incarnation, in some ways it’s easy to forget that this car made history. The Clio MkIII took a second European Car of the Year crown, in 2006, becoming the first model to do so.

The technological revolution in the supermini sector hadn’t quite begun by this point, so this model only evolved the game further. It boasted a few more big-car features, but the main focus was on refining the recipe. This meant the MkIII was yet again quieter, smoother, more comfortable, roomier and more practical – and safer, too. In fact, it was the first supermini ever to be awarded a full five-star Euro NCAP crash-test safety rating – something many bigger Renaults achieved in the 2000s.

Aside from its improved efficiency, you don’t immediately get the sense of exactly what changes the MkIII represented, its real development goals and how it significantly moved the game on, but it’s all there. It’s not a classic Clio, but it’s certainly an important step in the car’s history, helping the Renault get to where it is today.

It introduced some notable features that have become commonplace on the car, such as the Renault key card. With a starter button rather than a traditional ignition, the MkIII had a credit-card-style fob, and it was backed up by tech such as a tyre-pressure monitor. 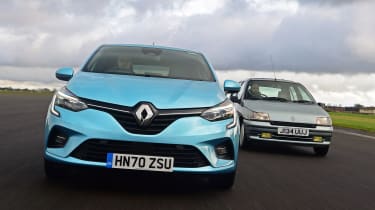 One fact that dates our test car is that it’s a three-door – supermini buyers only want five-doors these days. But inside, the use of soft-feel materials on the dash and some neat finishing touches remind us of how grown-up the third-generation Clio does actually feel.

MkIV Its successor arrived at a time of flux in the new-car market, when manufacturers were exploring downsized turbocharged engines, new infotainment and a lot of other technology. The MkIV didn’t quite nail any of it, and despite it only recently being replaced, the fourth-generation model is probably the car that takes the crown of the ‘forgotten’ Clio – especially the lacklustre turbocharged and auto-only RS of this generation. While the Clio was a worthy supermini choice, it wasn’t quite the best in its class.

Still, it was in this all-new version where a lot of the engineering advances really started to ramp up. The styling is more curvaceous again, with designer Laurens van den Acker describing the Clio’s look as “simple, sensuous and warm” at the time. It’s nothing out of the ordinary today, but the LED running lights and tail-lights, bigger alloy wheels, plus the longer body and wheelbase (which created more room inside) marked it out as a step on. 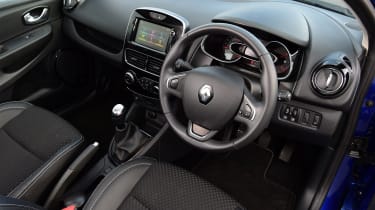 There was a new 0.9-litre three-cylinder turbocharged engine as well, as per market trends in 2012 when the car was unveiled. Meanwhile, a touchscreen infotainment system inside the cabin indicated that the French supermini was now packed with technology.

However, even at the time, the way in which the engine responded and pulled meant it wasn’t as smooth as the best powerplants in the class, while the gearchange was undeniably notchy. It’s also obvious from the tech that this was Renault’s first foray into touchscreens; it’s not a patch on the Clio MkV’s, which is a huge step on.

MkV The 2019 arrival of the current car brought the Clio right back to the forefront of buyer consciousness, not least thanks to the very current ad campaign that ran alongside the model’s reveal. 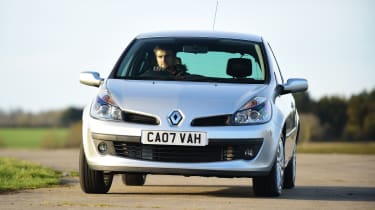 The two bookends of the Clio story show just how far the car has come, because the MkV in our photoshoot sports the brand’s latest twin-motor hybrid powertrain. It best highlights just how the supermini market has changed over three decades. It’s keen enough to run in electric mode, especially at low speed, and the same great level of comfort and refinement that characterised the first Clio underpins the driving experience in this latest car, too.

Combined with plenty of room inside the cabin and a 391-litre luggage space, the Clio can now occasionally operate as a family car. This is why it’s our current favourite supermini, and a great choice. The tech on offer is strong, yet the model remains great value as well.

There are further themes that run through the nameplate’s lineage, too. Even the remote-control volume stalk mounted on the steering column cowl is similar to the original’s, and while some brands have tweaked their corporate logos through the past 30 years, the Renault rhombus has remained a solid symbol throughout.

Over that time the Clio has grown physically, matured and served up everything from small running costs to big thrills for millions of drivers. The story has had its twists and turns for sure, but this car’s many merits mean it’s now in a new chapter of success that it very much deserves. 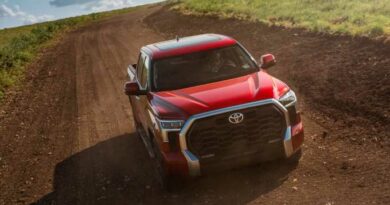 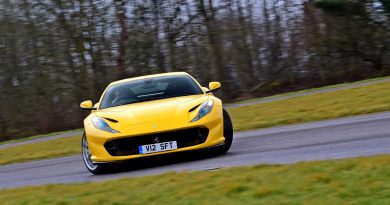 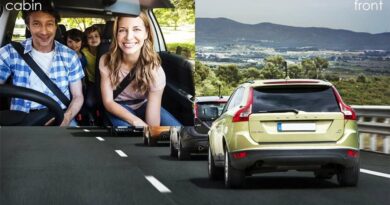 Spotlight Deal: Save $40 on this Top-Rated, Hi-Po Dash Cam That Uber Drivers Swear By