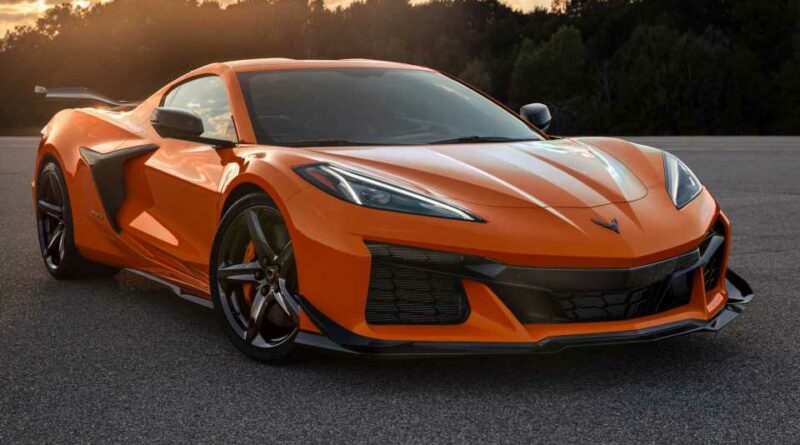 When the C8 Corvette debuted back in 2019, we were properly impressed by its performance stats. With the base model Stingray matching the previous-generation ZR1 to 60 mph, we could only imagine the capabilities of future models. Now, the next step in the C8’s mid-engine journey is here with the new Z06. Actually, it’s not a step. It’s a freaking ginormous jump.

The LT6: No Turbos, No Problem

How else would you describe 670 horsepower (500 kilowatts) at – wait for it – 8,400 rpm? Say hello to the LT6 V8, which Chevrolet says is the most powerful naturally aspirated V8 engine to grace any production car, ever. This 5.5-liter DOHC V8 is an all-aluminum affair with a dry sump, a flat-plane crankshaft, and an official redline of 8,600 revs, just 200 rpm past peak power. Even the maximum torque rating of 460 pound-feet (623 Newton-meters) has a lofty peak of 6,300 rpm. This rev-happy engine is unlike anything to ever grace a Corvette, save for the C8.R race car from which it’s derived. And it sends the Z06 to 60 mph in 2.6 seconds.

As you might imagine, adding that much power requires more air to keep it cool. Chevrolet’s Z06 teaser photo didn’t reveal significant visual changes from the Stingray, but it wears a different front fascia that channels air to a center heat exchanger, one of five used on the Z06. It has a stance 3.6 inches wider for better balance and handling, but the increased width also allows more air to enter the side vents. At the rear there’s a new fascia that houses the Z06’s floating quad exhaust outlets, and the design is no afterthought. Engineers spent two years fine-tuning the pipes to ensure it sounded unlike any other ‘Vette ever built.

This bonkers new engine is what everyone will be talking about, but like previous Z06 models, it’s only part of the performance equation. The aforementioned wider stance allowed Chevrolet engineers to fit the new Z06 with the largest wheels ever used on a production Corvette. 20-inchers in front wear 275/30-series tires, while 21-inch wheels at the back roll with steamroller-spec 345/25-series tires. And if you don’t like the standard-issue “spider” wheels, Chevrolet offers seven various wheel packages to choose from.

The suspension gets Z06-specific calibration versus the Stingray, but drivers will still find a plethora of settings for both hardcore track driving and casual touring. Brakes are upgraded to six-piston Brembos in front, clamping down on 14.6-inch rotors. Rear brakes are slightly larger with 15-inch rotors, but optional carbon-ceramic brakes bump sizes to 15.7 inches in front and 15.4 inches at the back. It’s also an extremely stiff car, so stiff that Chevrolet offers a Z06 hardtop convertible without the need for extra bracing.

Aerodynamically speaking, standard Z06 models get a front splitter and a modest rear spoiler with an installable fixed wickerbill that Chevrolet describes as a small tab at the spoiler’s edge. It can increase downforce, but we suspect folks seeking downforce will opt for the carbon fiber aero package that makes the Z06 look like its racecar sibling. It includes a larger front splitter, dive planes on the front corners, underbody strakes, and the big wing we’ve seen on numerous camouflaged prototypes. 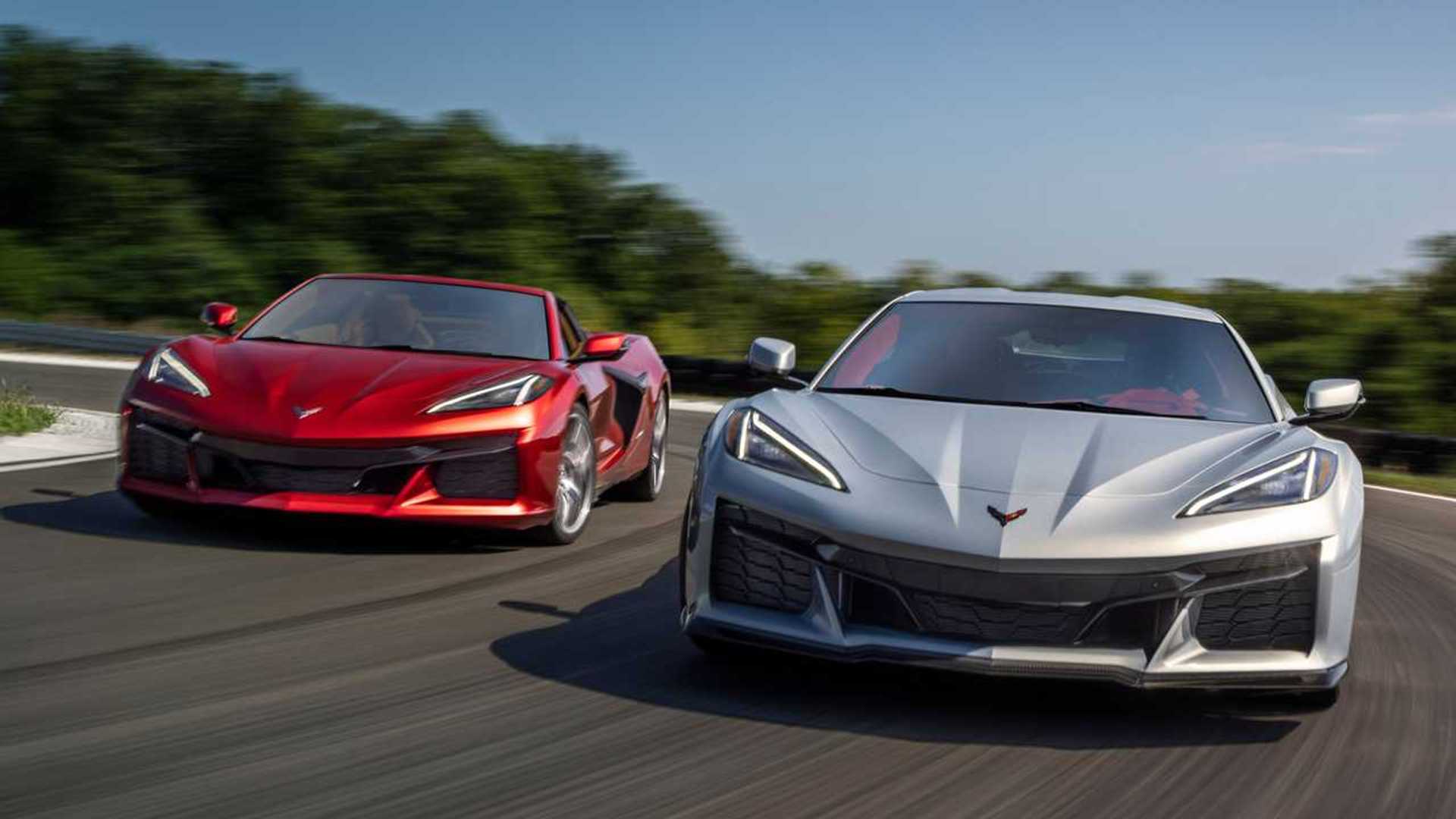 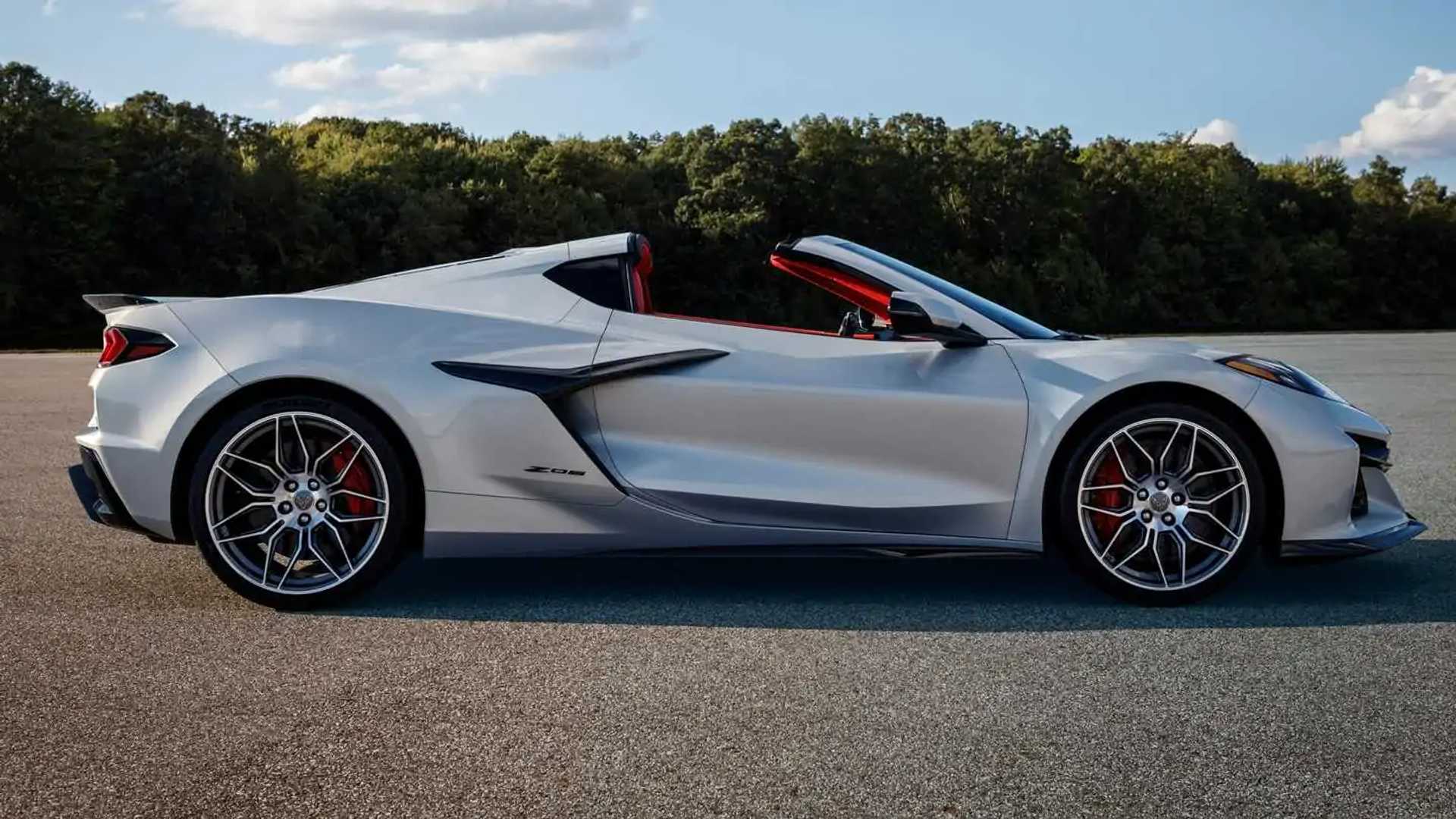 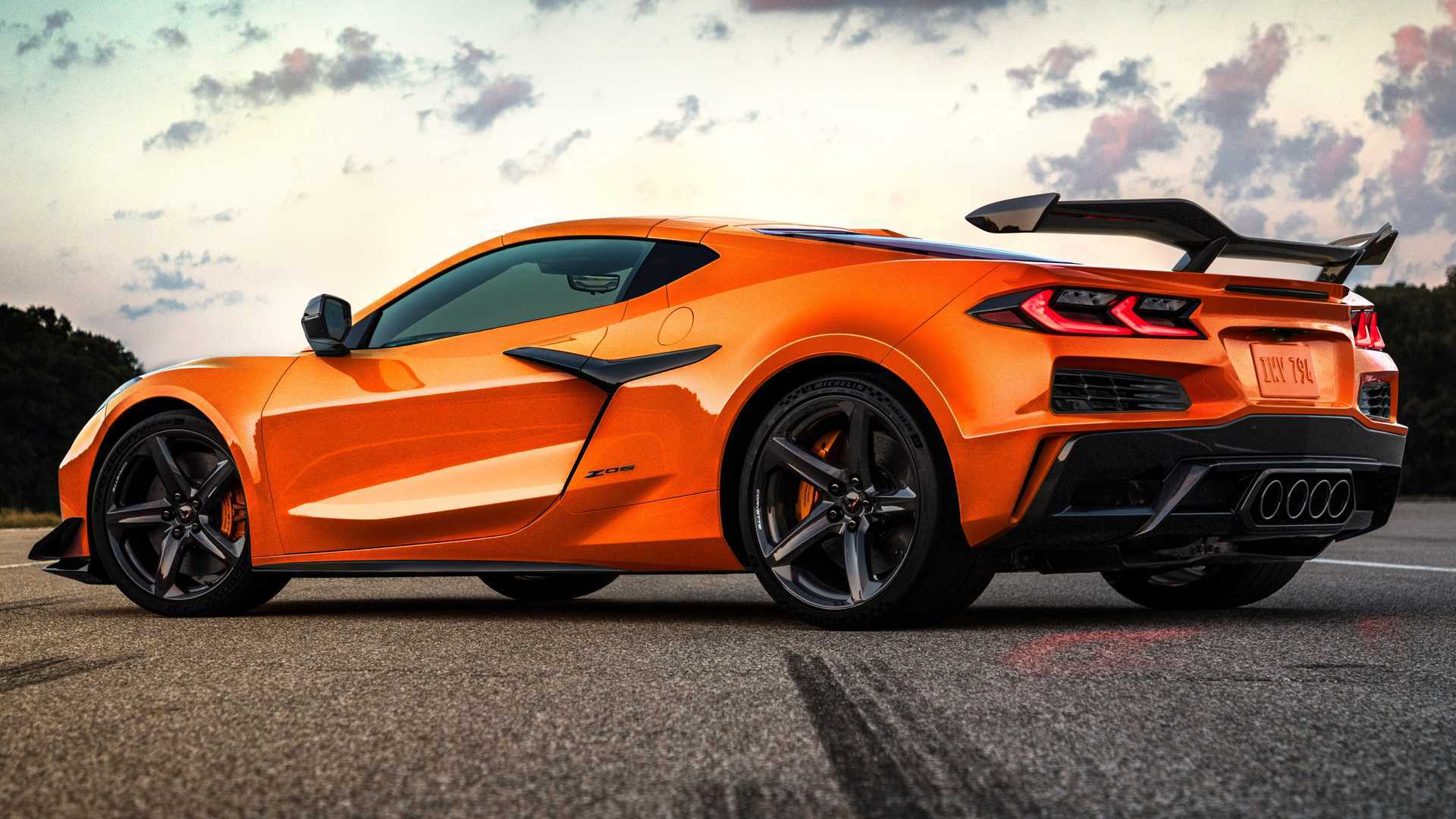 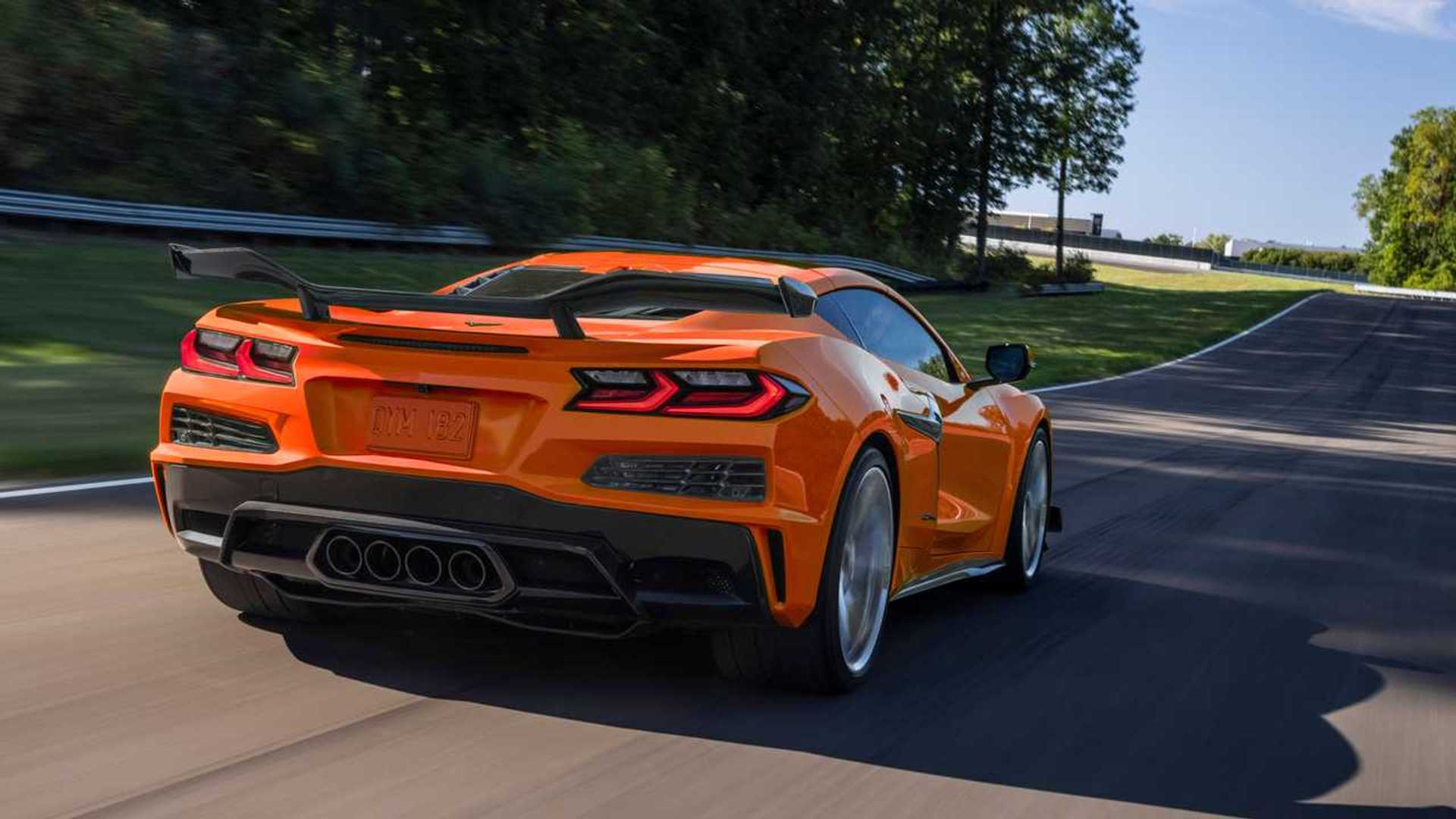 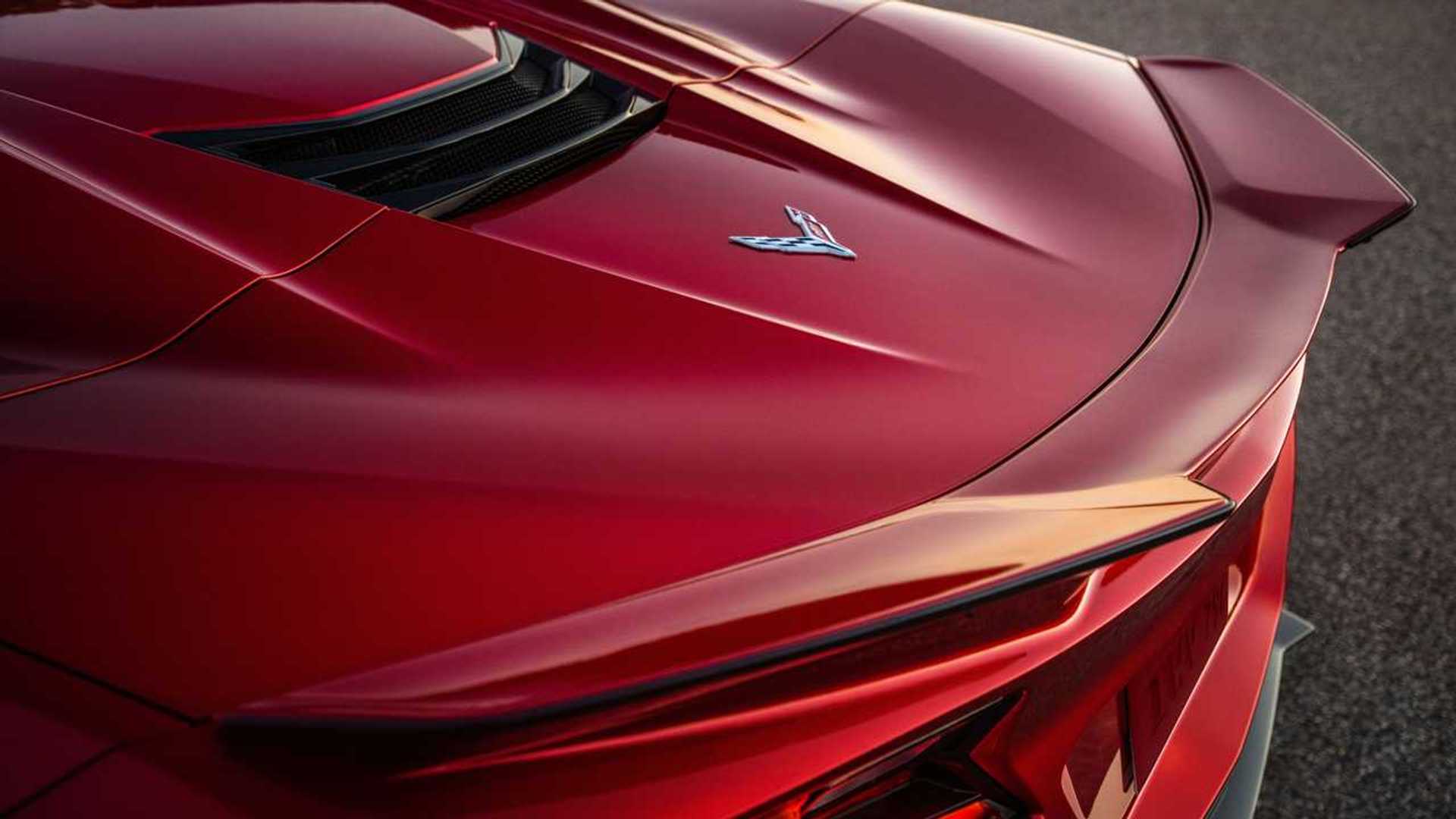 Or, you could just check the box for the Z07 Performance Package and get all the previously mentioned upgrades plus a few more. The familiar package adds the FE7 suspension with additional Magnetic Ride Control 4.0 calibrations. You also get super-sticky Michelin Sport Cup 2 R ZP tires that were developed specifically for the new Z06. They can be mounted on various wheel choices, including carbon-fiber wheels that cut 41 pounds of unsprung weight from the Z06.

Thusly equipped, Chevrolet says the latest ‘Vette can pull 1.22 g on a 300-foot skidpad and achieve 734 pounds of downforce at 186 mph. And yes, you’ll find a few extra touches in the cockpit, primarily with carbon-fiber trim packages and a new Adrenaline Red interior trim option.

Unfortunately, Chevrolet is a bit shy with such info at this time. With shifting duties carried out by an eight-speed dual-clutch transmission featuring a shorter final drive, the Z06 is hypercar quick with a 0-60 time of 2.6 seconds but we don’t know know the top speed. With nearly 700 horsepower, reaching 200 mph is certainly possible.

Barring production delays due to chip shortages, COVID, or some other unforeseen apocalypse, Z06 production will begin in the summer of 2022. Pricing information will be announced closer to its on-sale date. 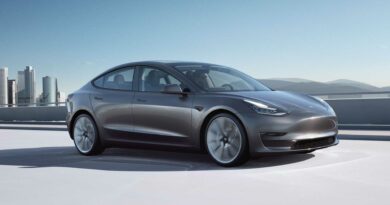 France: 21.5% Share For Plug-In Sales For First Time In September 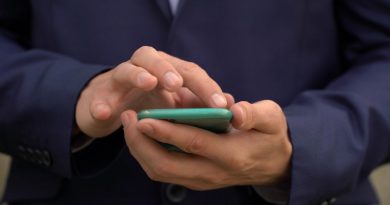 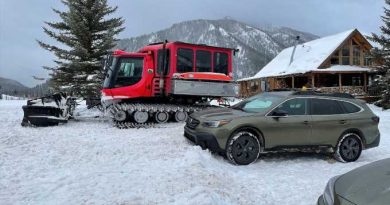 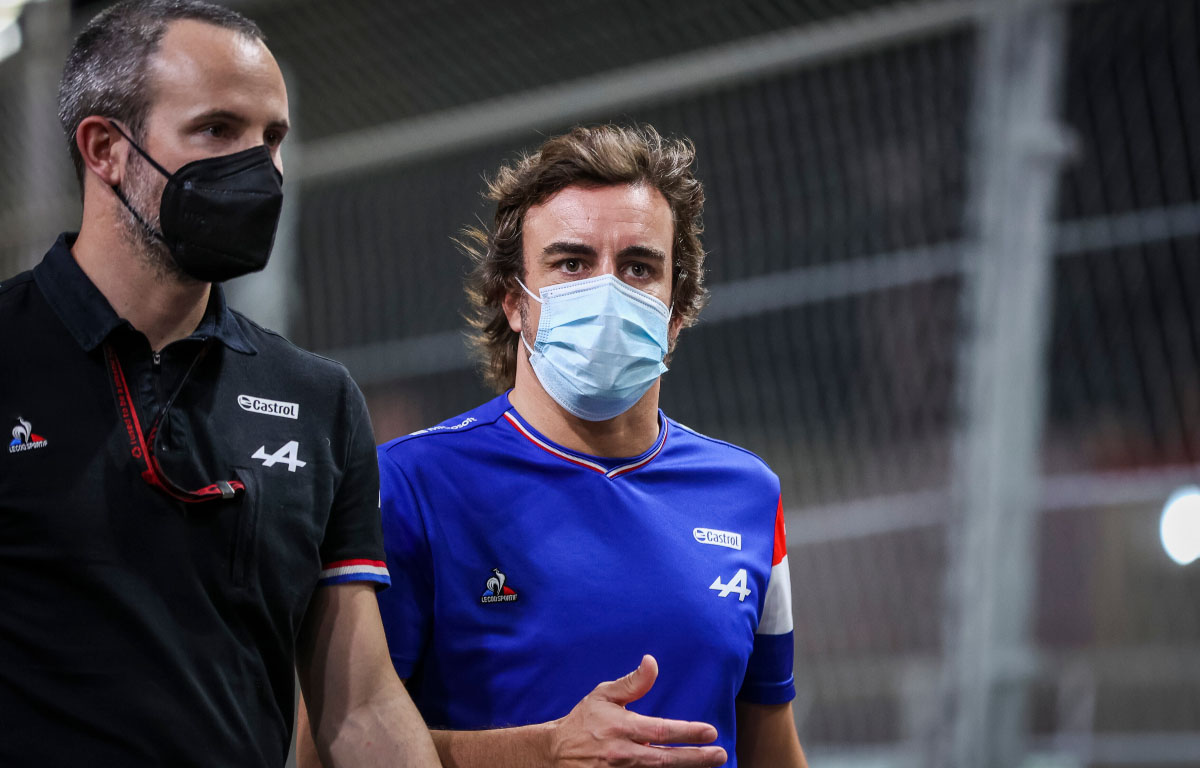